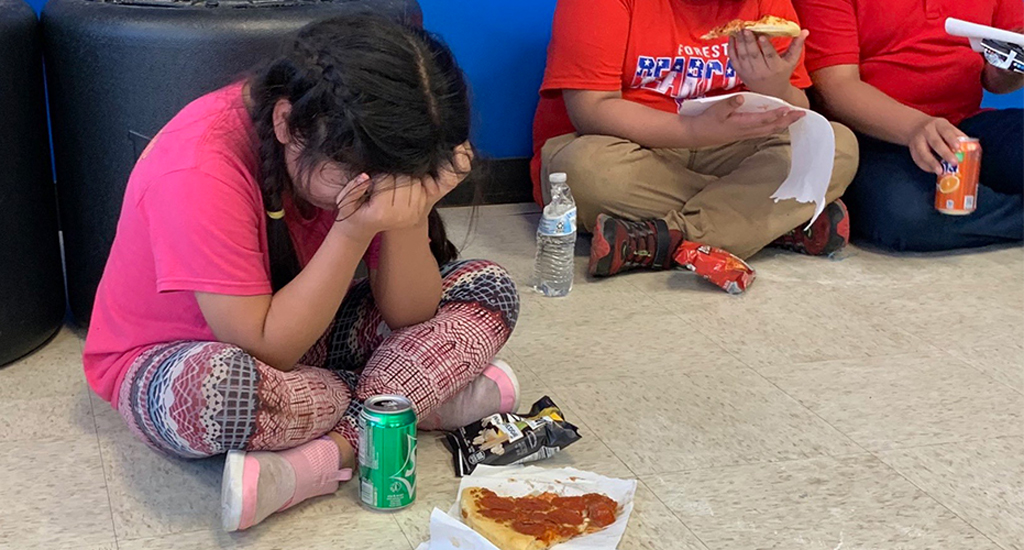 A Nightmare Come True: What It’s Like Living in Fear of ICE

On an uncharacteristically hot weekday in September, my stomach growled with hunger as I made my trek home from an expectedly dull day of middle school. Like so many days of my childhood, I was eager to know what my mom would make for dinner. As I headed home to our crowded one-bedroom apartment, I was hoping that tonight’s entree of choice wasn’t caldo de pollo—a hot soup that Mexican moms tend to especially reserve for the most scorching days of the year.

I made my way up the driveway like I had done every day before it, stepped up to our faded cream-colored door, knocked three times and waited. It was already past 4 o’clock and my mom should be home from work—probably preparing a big bowl of caldo de pollo. I knocked again, this time slamming the screen door thinking the loud noise would make someone come to the front door quicker. No one answered.

I panicked. My mom would always answer the door and greet me with, “¿Cómo te fue en la escuela, mijo?” “How was school today?” and a kiss on the cheek. But not today. My heart sank. My fingers got cold. I rubbed the wooden cross on my neck with my thumb and instantly started praying. “Padre nuestro, que estás en el cielo, santificado sea tu nombre,” I murmured.

With my hands clenched to my backpack straps, I began to imagine the worst: What if immigration officials had picked up mi papi y mami from work?

I had arrived at a seemingly empty home, and my automatic reaction was thinking I had been stripped of the two people who had given up their lives, families and the only home they’ve ever known in Mexico to give me a life filled with opportunity in the United States. We had considered hypothetical scenarios where we’d be separated in the past, but we had never come to a definite answer as to what we’d do. Would I stay in the United States living with one of my aunts? Would I be forced to move to Mexico, too? Would I have to enter the foster care system? I didn’t know the answers to these questions.

I walked around the outside of the apartment searching for proof that someone had burst into our house, but then cutting through my panic, I heard running water and my mom’s voice humming her favorite church tune, in the shower. An immediate sense of relief washed over me. Todo estaba bien—and I couldn’t care less if my mom had cooked caldo.

I lived with the fear of losing my parents to ICE (Immigration Customs Enforcement) throughout my childhood. Each day I didn’t know if an empty house was waiting for me at the end of that familiar walk home from school.  And still to this day, I fear finding that empty house. My parents continue to live as undocumented immigrants and their presence in this country is never certain.

On Wednesday, my life’s biggest fear became a reality for dozens of children who came home to empty houses. Nearly 700 Mississippi workers, most of Latinx descent, were arrested solely because they lack documentation. For ICE, this meant enforcing the law. For those workers’ children, it meant losing their parents indefinitely—and with them, their security and well-being.

As I watched a viral video of 11-year-old Magdalena Gomez Gregorio begging for her father to be returned to her, I recalled that moment of hopelessness coming home from school, afraid that perhaps mi papi y mami were gone. These kids were going through exactly that—except it actually happened.

“Governments please put your heart. Let my parent be free,” she says in the video, sobbing. “I need my dad by me. My dad didn’t do anything. He is not a criminal.”

There is no justification for these separations. By enforcing the law in such a crude way, the ICE agents are terrorizing these children’s lives and building an irreparable emotional trauma that so many of us whose parents don’t have papers have always feared facing.

Growing up in this environment of uncertainty didn’t just involve fearing my parents’ deportation—it also clouded other aspects of our lives.

When my grandmother passed away in 2014, my dad couldn’t say goodbye to mi abuelita one last time. He couldn’t grab her hand and kiss it as I had seen him do so many times before she became ill in Mexico. And he couldn’t be there by her side as she took her last breath. Instead, he and his seven siblings crowded around a laptop to watch her funeral via Skype—staring at the corpse of the woman who raised them. All eight of them were stuck in the States. If they decided to head to Mexico, they’d be unable to return.

My mother spent 20 years without seeing her eldest sister, La Muñeca—a nickname I fondly remember hearing from my parents’ room whenever my mom bought one of those calling cards for making calls to Mexico. They’d spend hours on the phone talking about their lives, which were only connected by a phone line.

I vividly recall the moment my mom saw her sister for the first time since the early 1990s. She dropped to the floor in tears after seeing su hermanita and was overcome by shock. That night, neither of them slept, digesting the fact that they had finally seen each other again—something that was never promised.

The conversation surrounding immigration must always include the reality of separated families—whether it’s Magdalena who was pulled away from her father or my own family’s story—this issue is more than just political; it’s highly personal.

Growing up in the Bay Area, treks to Los Angeles were uncommon. We stayed within the confines of where we lived, because getting too close to the border was “too risky.” My parents make sure to obey every traffic law and take extra precaution to avoid meeting with police.

Filing taxes and asking for financial aid take an extra level of care, because a small mistake could trigger a government response. Without valid social security numbers, my parents can’t get verifiable jobs. Where they work is limited to who is willing to hire two “illegal aliens” who want to provide for themselves and their family.

They fear that their illegality is somehow easily perceivable by people, so they avoid any interactions that can put them in danger.

Immigration is a real, human issue and it needs to be approached in that vein. No one is safer when families are separated and no child should be taken from their parents just because they came into the United States to give them a life that’s unattainable back home.

I know that there are hundreds of Americans like me, who fear that one day they’ll knock on their door and not find their families on the other side. Instead, I hope that every one of those knocks is met with a familiar, loving face reminding us that a piece of paper will never change the place we call home.

When Racist Rhetoric Meets Gun Violence in the United States