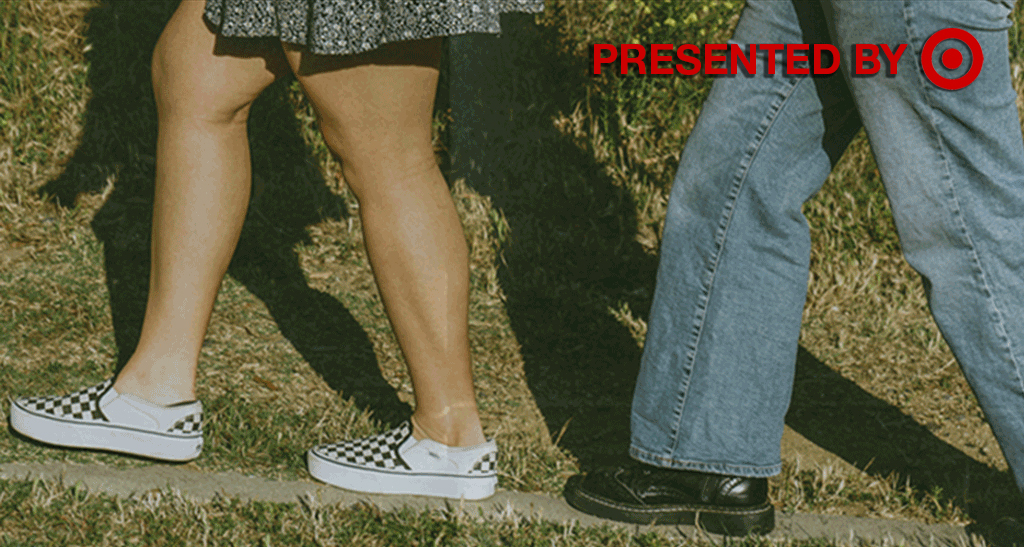 A Tale of Two Worlds: Hope, Resilience and Proud Cultural Roots Abound for Latinx Teens and Young Adults in the U.S.

Latinx teens and young adults—whether they were born in the U.S. to immigrant parents or immigrated with their families as children—have the same hopes and dreams as their non-Latinx peers. Like most young people, they wish to make friends in high school and college, complete their goals of higher education, and find work in a field that interests them, amid countless other professional and personal aspirations.

Among the youngest racial or ethnic groups in the U.S., Latinx youth are often faced with added pressure to make their parents, family, and communities proud. Oftentimes, this ambition to do and be more comes from witnessing first-hand just how much their parents and family risked and sacrificed in order to make a new life in the U.S.

Children of immigrants strive to balance two worlds—the world of their parents’ home country (or sometimes their own home country) and the world of modern life in the U.S., a nation that often—albeit gratuitously—prides itself as being built by immigrants. 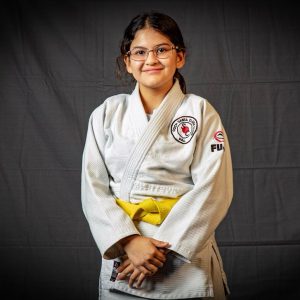 Some Latinx immigrants, such as 14-year-old Sara Sotelo, leave everything behind in their home country, including their immediate families, in order to pursue better educational opportunities in the U.S.

“I’m really happy to be here—I have no regrets, it’s a great opportunity. My goal is going to college, the basic stuff of being successful. [But it’s been] kind of hard growing up without my mom,” Sotelo told BESE.

Sotelo said she found a support system through friends, but there were moments where it was hard not having another parental figure around. She recounted not being able to attend some sport events because her father had to work or not being able to have her mother with her to celebrate Mother’s Day.

“[Not having my mother with me] impacted how I shaped up to be. It made me stronger. At first I was crying all the time, but then I became more emotionally stable,” said Sotelo.

After getting her first period, Sotelo had to tell her father which feminine products she needed.

“It was difficult telling my dad instead of telling my mom,” said Sotelo. “My sister was also over there [in Peru.] They [my father and my brother] didn’t understand what I needed and they wanted me to go swimming! […] My dad became more comfortable with it because I frequently talked about it without making it awkward. I cried at first, but my dad would tell me ‘No, it’s normal.’”

“Normal” is a concept Sotelo confronts every day. By engaging in hobbies like learning piano, swimming, practicing judo, playing the trumpet, and singing, she gets to live a normal American life, all the while celebrating her and her parents’ traditions.

Sotelo originally came to the Bay Area from Peru with her father and middle brother when she was around six-years-old. Her father told Sotelo and her brother that they would stay for only a year or two. Now almost eight years later, she has navigated growing up with parents and siblings spread across two continents, including her mother who is still living in Peru. Although she usually visits her mother and siblings once a year, she was not able to see them this year due to the ongoing global pandemic.

“When you come [to a new country] at six or seven, it’s more challenging because you are used to your community. You have to adapt to a different country and learn a new language—it’s hard,” said Sotelo, also noting the challenges of making new friends while speaking a different language. “There’s also a time difference [from Peru], so there’s a bunch of factors you have to get used to.”

Sotelo said she keeps her roots alive by listening to Spanish language artists such as Maluma, Ozuna, and Shakira, speaking Spanish at home, cooking and eating Peruvian food, and spending time with her extended family in the Bay Area—thus balancing her new American life with her immigrant roots, all while aiming for her educational goals.

A 2009 Pew Research Center study compares the lives of U.S.-born Latinx youth and those who are immigrants from Latin America to the U.S., finding that “young Latinos are satisfied with their lives, optimistic about their futures and place a high value on education, hard work and career success.”

Like Sotelo, Christopher Ceja, a 12-year-old student from San Jose, is enthusiastic about his school and extracurricular studies—he loves tech and robots—while remaining involved in the traditions of his home parents’ home country. 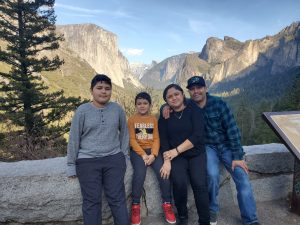 Photo of Christopher Ceja and his family on a camping trip. Courtesy of: The Ceja Family

Ceja was born in the U.S. after his parents both immigrated from Guadalajara. He said school was hard in the beginning because he didn’t know any English. During those first few years, his parents also didn’t know English that well. Fortunately, Ceja’s school started an English program with a more one-on-one approach for kids whose first language was Spanish.

Even now, as a fluent English speaker, Ceja remains extremely proud of his roots (talking excitedly about how his favorite show growing up was “El Chavo del Ocho”) and has never wavered in representing his culture—even in the face of adversity.

“At my elementary, I did get [harassed] by a kid who was fully American,” said Ceja “[…] He came after most Latino kids and most kids gave into what he wanted. I was friends with a lot of them that didn’t know a lot of English. That’s the one infuriating thing that has happened to me because of my Latino heritage. Teachers didn’t believe it because there was not a lot of evidence. I could barely communicate until [they saw the circumstances themselves on the playground.]”

Ceja said after this incident, teachers at the school started to pay more attention to instances of racism, and they also started to bring awareness to Latinx cultural celebrations, such as Mexican Independence Day.

“Those days when we got a day to celebrate our heritage, American kids looked at us in disbelief. A lot of kids got mad because they felt we were being treated special. But I didn’t understand [and it made me] kind of sad because they have their own Independence Day and President’s Day and we only have one day. That day we got to celebrate was important to me,” said Ceja. 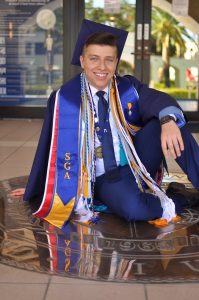 Photo of David at his graduation. Courtesy of: David Nivia

David Nivia, a 24-year-old immigrant from Colombia, shares a similar hard experience he encountered as a child in Boca Raton.

Nivia, who is originally from Bogotá, fled Colombia at the age of seven with his parents and family after his mother was robbed. Her purse unfortunately held personal documents detailing the family’s business, home, and school addresses.

Out of fear of being extorted when the robbers called to ask for more money, Nivia and his family fled to Miami without time to say goodbye to family and friends.

For the first half year of their stay in the U.S., Nivia attended a mostly White school in Boca.

“Because of the language, I felt like naked, like I was here alone. I got [made fun of] in school.

I guess that built my personality now. I’m friendly and extroverted to an extent. Life has forced me to be like this,” said Nivia.

Things got a bit easier when his family moved further south to Miami.

Most people spoke Spanish and Nivia got into an ESL program, where he felt a renewed sense of welcome. He said he feels his experience in the U.S. has been an “amazing” one despite coming to the country under “unfortunate” circumstances.

In spite of their obstacles, Ceja and Nivia continue to fight on for their aspirational goals, which may have been different had their families remained in their Latin American home countries.

“Our goals are a lot different [than those of people in Mexico],” Ceja said of the difference he sees between living in Mexico and the U.S. “I want to become a mechanical engineer—an engineer for cars and transportation. Their goals are a lot smaller than ours. My goal is pretty big I would say. Their goal is to have a family, their goals are to work at their family company. [They] can’t dream as big because they don’t have the resources to. It’s kind of sad.”

Nivia is twice Ceja’s age, but also echoes this sentiment—stating how the resources in the U.S. make career dreams more attainable than they would be in more resource-limited parts of Latin America.

“Every country has opportunities—has pros and cons. In America, the sky isn’t even the limit. In Latin America, the sky might be the limit. Here you can go as high as you can or want,” Nivia said. “If you want to go higher in Colombia, it’s hard because of the structure [and] income inequality.”

Nivia recently graduated from Florida International University (part of the class of 2020, which graduated via Zoom) with a double major in International Business and Supply Chain Management. He is currently working in his family import and export business due to the pandemic, but has his sights set on public office someday—either as the secretary of treasury or commerce to the U.S. president, or an international trade representative.

Sotelo still has some years to catch up to Nivia in terms of mapping out her dream career path. Her main focus now is to continue to show her family how far she’s come.

“My main goal is to make my parents and myself proud, and have a career that makes me happy,” she said.

Sotelo’s story, as well as those of Ceja and Nivia showcase the strong will of Latinx youth to surpass the hurdles of immigration, family separation, trying to adjust to a new language at school, and more amid the regular coming-of-age struggles. From cooking traditional dishes, to listening to current Spanish-language artists and continuing to speak Spanish inside and outside their homes, teens and twenty-somethings like Nivia, Ceja, and Sotelo continue to embrace their roots proudly.