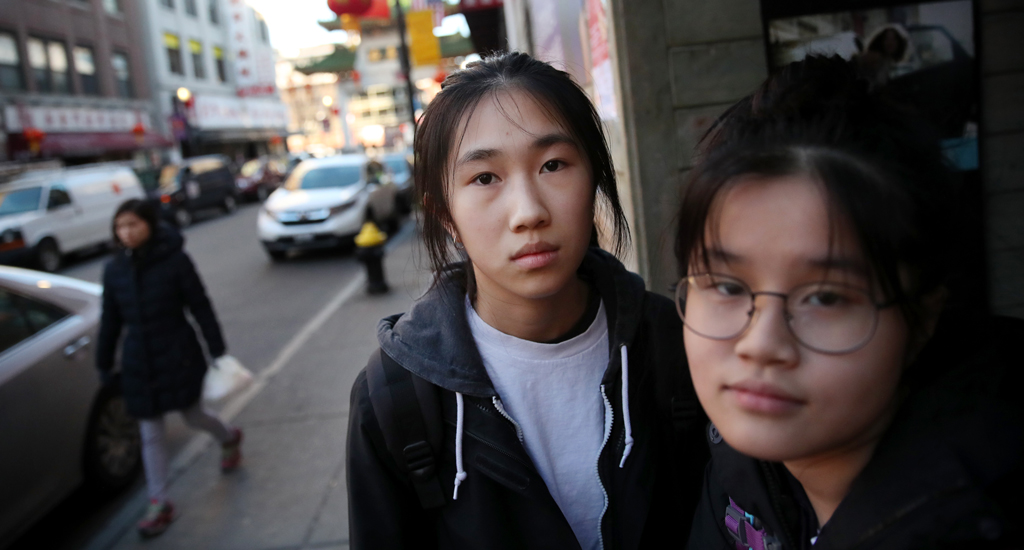 I should probably get used to people roaming around with cameras, I thought, as I passed another white man on the street photographing our fruit stands like they were exotica.

I was accustomed to this sight wandering Chinatown, but not Flushing. My Fǎlāshèng (法拉盛) is now famous for Anthony Bourdain’s praise of our food culture, and our metropolis of Chinese storefronts. Our name, Flushing, is found in local and national papers and food vlogs. We are a well-placed enclave; people of all backgrounds feel proud of “discovering” our far-flung district at the suburban end of Queens.

Might as well get used to my hometown being perched on a pedestal.

A few days later, New York Post’s headline was passed around Twitter. The first case of coronavirus, or COVID-19, in New York was found in an individual from Iran, it reported, now safely settled in their home in Manhattan. The story had nothing to do with Queens or Asian New Yorkers, but it was broadcasted beneath a photo of an Asian man standing on the other end of the block from where I had seen the photographer a few days earlier. It shows an extreme lack of trust that I immediately wondered if this photo was taken by him. This shoehorned Chinese connection tells you why.

As a journalist of color, nothing hits harder than when the media misuses your face, and thus mistreats your people. These subliminal choices of words and imagery perpetuate what artist Monyee Chau aptly calls, “Yellow Peril ideology.”

During the 1850s to World War I-era, the sheer, unprecedented magnitude of social, political, and economic contact between the west and “Far East” inspired fear of invasion from the Orient into Europe, Canada, and the United States. This original “Yellow Peril” would affect hate crimes against Asian laborers who migrated west.

History doesn’t repeat itself, but it does rhyme.

Today, hate crimes have spiked against us throughout the west. Now, the attackers vocalize their motivation by telling their Asian victims that they do not want to catch the coronavirus from them.

Essentially, common people are caught in the crossfire.

The NY Post’s shoehorn is one result of ideology that rhymes with not only “Yellow Peril,” but the “Cold War.” Like then, the motivation to associate the nation of China with the coronavirus stems from political power struggle. In order to assert the United States’ competence in dealing with a health crisis, and thus its dominance as the most advanced and ideologically pure nation, President Donald Trump has been quick to shift blame onto China. The Washington Post captured a photo of his remarks, in which “corona” was crossed out and replaced with “Chinese” when talking about the virus. Call it that, and everyone will remember even superficially what—or who—the cause is.

“We were very prepared,” The Washington Post reported President Trump saying to an NBC reporter. “The only thing we weren’t prepared for was the, the media. The media has not treated it fairly. I’ll tell you how prepared I was. I called for a ban from people coming in from China long before anybody thought it was—in fact, it was your network, I believe, they called me a racist because I did that.”

There is no denying the virus’s origins in China, nor Beijing’s suppression of information. Like Trump, Xi Jinping’s administration antagonizes the press. He took it further by swiftly removing the western journalists who covered the breakout.

People in China who pay attention knew from the beginning how hard the government tried to ignore the coronavirus instead of taking steps to contain it. The name “Li Wenliang” still circulates Weibo on undercurrents of sadness and rage. Chinese and western media alike know him as one of the doctors who blew the whistle on the coronavirus before the outbreak, only to be suppressed and reprimanded by the government. He died from COVID-19 in February.

East Asian culture encourages silent action over individual outspokenness. When I was in China for the Lunar New Year, and subsequently the official outbreak in January, I observed criticism and frustration over how the state was handling what was supposed to be a health emergency. For the sake of their freedom to go about their daily lives—which, in Asia, is a Spring and Autumn Period Confucian value, and in the west is that of the 1640s Peace of Westphalia that held Europe together—I will not specify where I observed open criticisms of Beijing and Washington, nor with whom. I can only assert that Chinese people who pay attention to the news know perfectly well why Beijing and Washington fight a “war of words.” But if one lives in a country where the government is willing to coerce its own people, they will not say so.

To speak on one’s own indignation is a privilege.

We Asians are caught in the crossfire.

I’m sorry that the media is falling for it.

“Attention press clowns,” Mark Levin, an American radio host, tweeted. “It’s called the China virus because it was first in China… Now shut the hell up with your moronic regurgitation of the Chinese regime’s propaganda.”

He’s indirectly alluding to the Century of Humiliation. That period of imperialism that spawned the Yellow Peril, is a moral high ground for Beijing in politics. They defend themselves from western criticism by calling it racist. The catch-22 is that racist sentiment harmful to Chinese people can indeed find its way into that criticism—a thin line the Chinese government exploits to excuse their faults.

“This is not about editorial independence or the sanctity of the divide between news and opinion… It is about the mistaken choice of a headline that was deeply offensive to many people, not just in China,” Cheng wrote on his staff’s behalf.

As they are not empathetic beyond the western-centric, white-privileged institution they have been built upon, they did not apologize.

Even pedigreed journalists like Theresa Fallon, founder of the Centre for Russia Europe Asia Studies, gaslit protests from both Chinese and Chinese-Americans when she turned the words “Wuhan” and “Wenliang” into acronyms for preventing the spread of COVID-19. Like Levin, she justified her own racist tweets by pointing out, “Calling out racism is Beijing’s strategy.”

She’s right, of course, but that has nothing to do with the dialogue she is perpetuating against Chinese people—not the Chinese government. Strangely, the two are not the same. Like Beijing, she exploits that catch-22 for herself. The Chinese people have been inflicted enough by Xi Jinping’s ego, and now, people all over the world with their faces must contend with the ego of white media. By pretending to speak truth to power, she becomes that abusive power.

Once more, powerful forces like the white institution of America and the lifelong emperor of China are wielding a war of words. Once more, it is the people who are tossed onto the keyboards.

In the face of the white institution of American media, I have a person of color’s objectivity. Unless you mean for the people’s wellbeing—take our names out of your mouth.