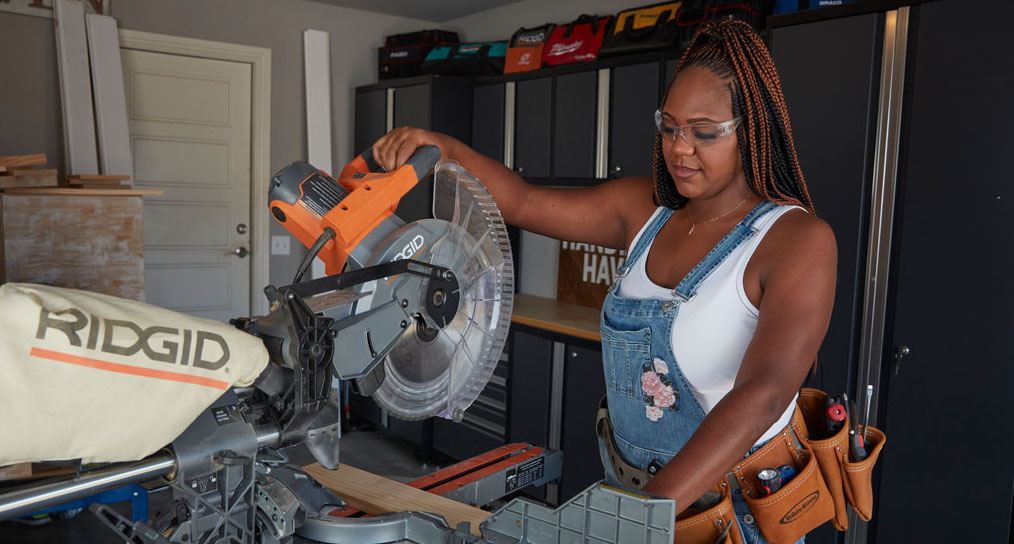 Ashley Basnight’s parents always knew that she was naturally creative. As a young girl, she was heavily influenced by her mother’s natural artistic abilities and her father’s do-it-yourself projects. Basnight and her father would spend their time fixing cars, working on minor renovations around their home, and learning about the latest technology.

Her parent’s encouragement and cultivation of her talent helped Basnight to narrow down her passions. But it was her aunt—who worked as a senior-level engineer at Microsoft—who inspired Basnight to pursue a bachelor’s degree in computer science at Elizabeth City State University.

Her degree led her to secure a position as a software engineer at Boeing, but her love for woodworking arrived later in her life.

In 2016, Basnight was looking for a custom table to add to her home but kept coming across options outside of her budget. She decided to take matters into her own hands.

She successfully built the table and was proud of her creation. She posted it online and was met with immediate positive feedback.

“So many people were commenting, like, ‘Wow, that’s so good. I didn’t even know you could build.’ I was like, ‘Well, me either.’ You know? But after that, I was like, ‘Man, maybe this could be a hobby.’ After that, I just started building nonstop.”

Today, Ashley Basnight is the founder and CEO of Handmade Haven—an online do-it-yourself blog that features Basnight’s woodworking creations and provides resources for those interested in the hobby.

“It’s definitely important to me to make sure that women know their capabilities and [that] they have the confidence to be able to build,” she continued. “When I started building, I definitely didn’t see a lot of African Americans building, specifically women, and even on television.”

Her woodworking skills have taken Basnight from the internet to network television. She recently starred in the NBC competition series, “Making It,” where Basnight and other craftspeople competed in a series of woodworking challenges to become the “master maker” and win over 100,000 dollars. The series was co-hosted by actors Amy Poehler and Nick Offerman and allowed Basnight to showcase her talents to a broader audience. While reminiscing on her time with NBC, Basnight says that the supportive aspect of the show provided her with the encouragement that she needed to succeed.

“I think my favorite moment was one of the challenges. I was racing to the finish, and I almost didn’t make it. All the makers, they kind of like came to help, because they were finished with their projects. So just seeing them kind of like jump in and willing to help, that was a really awesome moment.”

Her experience on “Making It” and her desire to see Black women represented in the woodworking space has inspired her to pursue her own television series.

“I’m trying to pursue a show and just talking to different networks and sharing with them, like, diversity matters. That’s something I want to see, and that’s something that I want to bring to the table,” she said.

All in all, her ultimate goal is to encourage those around her to take on new challenges and hobbies.

“I feel like I’m leaving a mark, an impact. I feel like that’s worth more than a big house, money, all the things, just to be able to know that there’s somebody who maybe is intimidated to build, but they saw one of my tutorials, and they were like, ‘You know what? I’m going to try.’ And that gave them the confidence to try more things or just apply that to other areas in their life.”