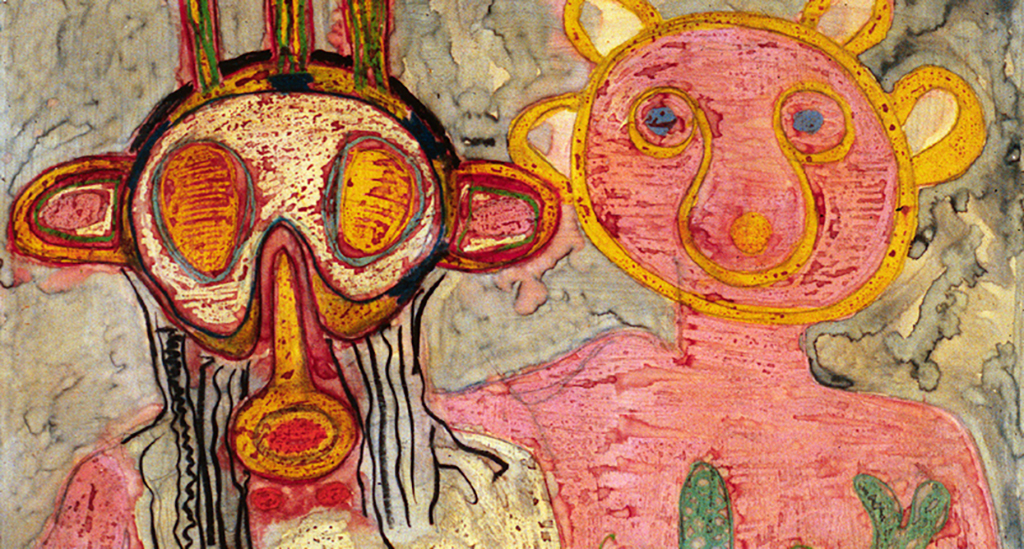 At the Hunter East Harlem Gallery, ‘Queenie’ Celebrates the Significance of Latin Women in Art

The exhibition takes its name from a new artwork commission by Alessandra Expósito. Like in much of the artist’s work, animal symbolism figures prominently in “Queenie.” The sculpture, a bubblegum-pink horse skull adorned with Swarovski crystals and flower-speckled antlers, is a bitter subversion of the male connotations of game. Expósito toys with the notions of trophies that value animals more in their death than in life by ornately inscribing the name “Queenie” above an oval portrait of the living mare right on the center of the carcass’s head. The artwork is kitschy and gaudy in the best way and can’t help but feel like a joke on the pageantry of femininity and the objectification of female life, in all its forms. 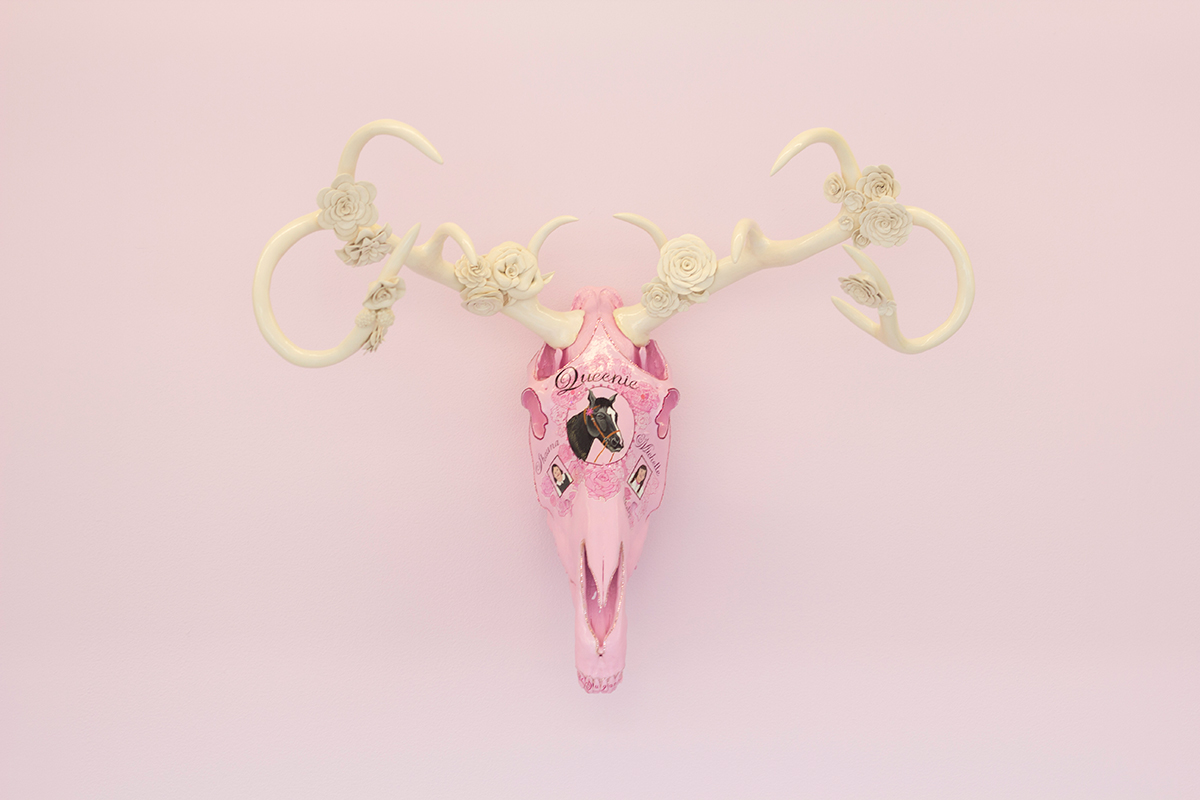 Further into the show, colorful wall-hangings made by anonymous female artisans in Chile document the everyday brutalities people experienced under the Pinochet dictatorship from 1973—1990 (disappeared family members, burning bodies, futile protests). The naïve little “arpilleras,” which were successfully smuggled out of the country due to their child-like style, hang beside the joyously messy “Pareja Taína (Taíno Couple),” a pair of wide-eyed, cartoonish figures inspired by the indigenous people of the Caribbean by East Harlem painter Nitzia Tufiño. 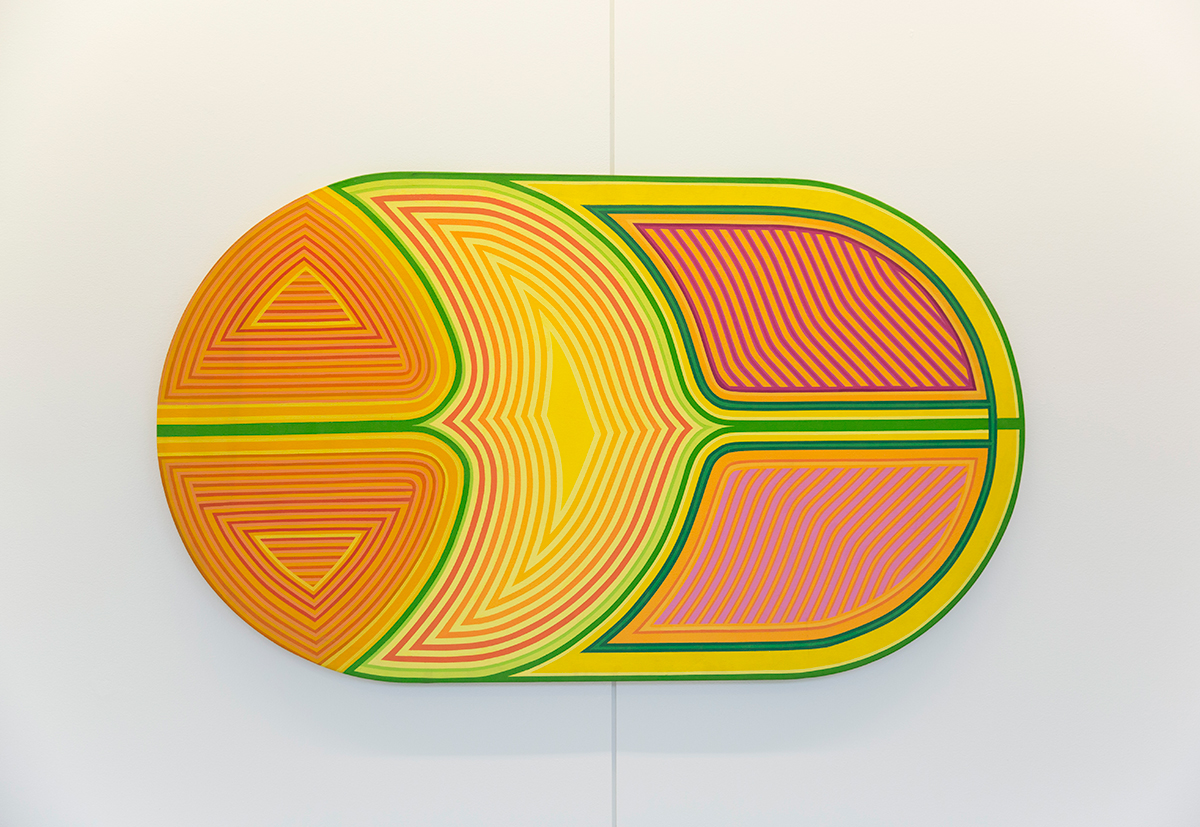 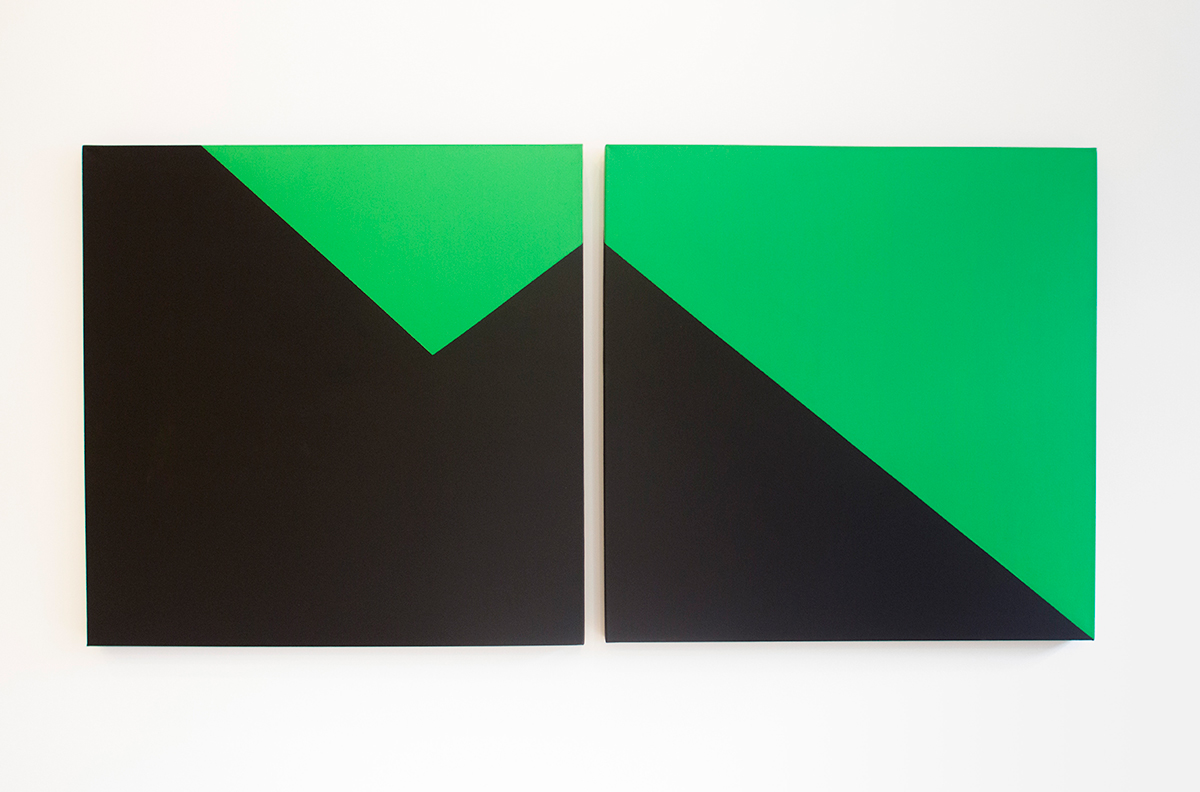 Some of the pieces in the show are explicitly political, others are not. Of the latter category—and one of the exhibition’s stand-outs—is Carmen Herrera’s “Díptico,” a work from 1978 on view for the first time in decades. The Cuban artist, whose systematic and rigorous abstract style recalls Ellsworth Kelly or Barnett Newman, only recently became recognized as a key player in postwar history (she sold her first artwork at the age of 89). The two-panel black-and-green painting of sharp angles and infinite precision on view makes the viewer wonder whether she was ignored for so long because she was a woman, a Latin American artist, or both. 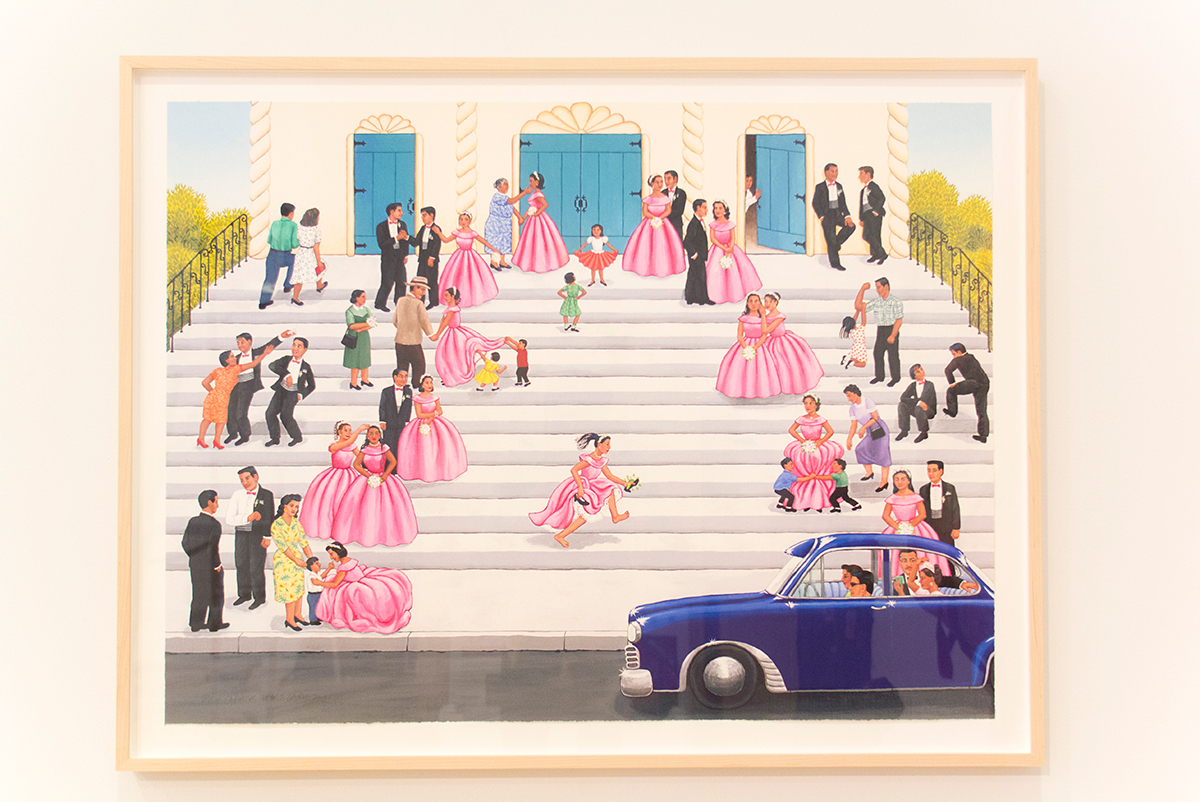 Quinceañera (15th Birthday) from the portfolio The Chicano Collection by Carmen Lomas Garza, 2005 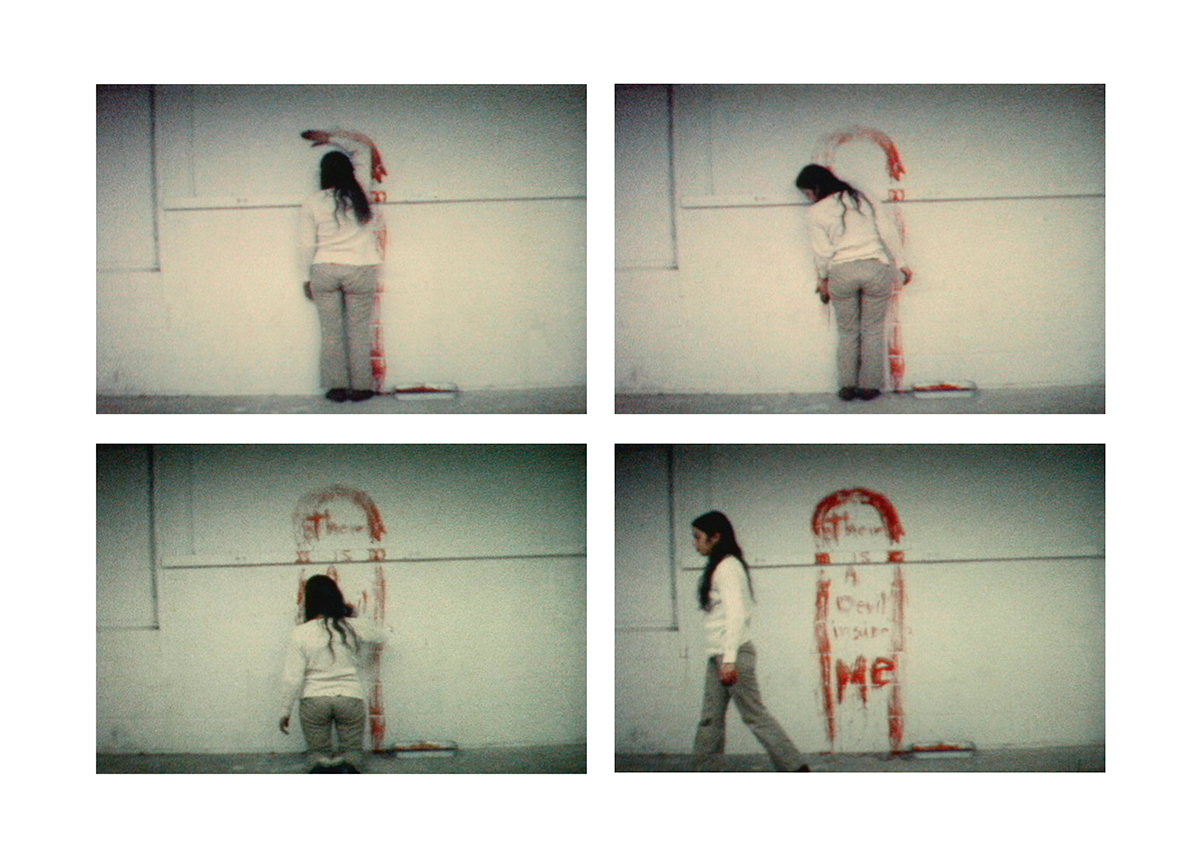 In the back corner of the gallery, behind Herrera’s Minimalist painting, a screen portrays the short, grainy video that the Cuban-American artist Ana Mendieta made in 1974, “Blood Sign.” It opens with the artist standing in plain gray pants and a white t-shirt, her back to the camera. She reaches down into a painter’s tray of animal blood on the floor and, with her back still to the camera, traces a tomb outline of her body as she slithers down the white wall. Before walking off camera, she writes the phrase, “There is a Devil inside me.” Is this a religious rite? A feminist ritual? Mendieta’s meditations on gender, identity, assault, and death are as ambiguous as they are crystal-clear from an artist rumored to have reached her untimely death at the hands of her husband, artist Carl Andre. 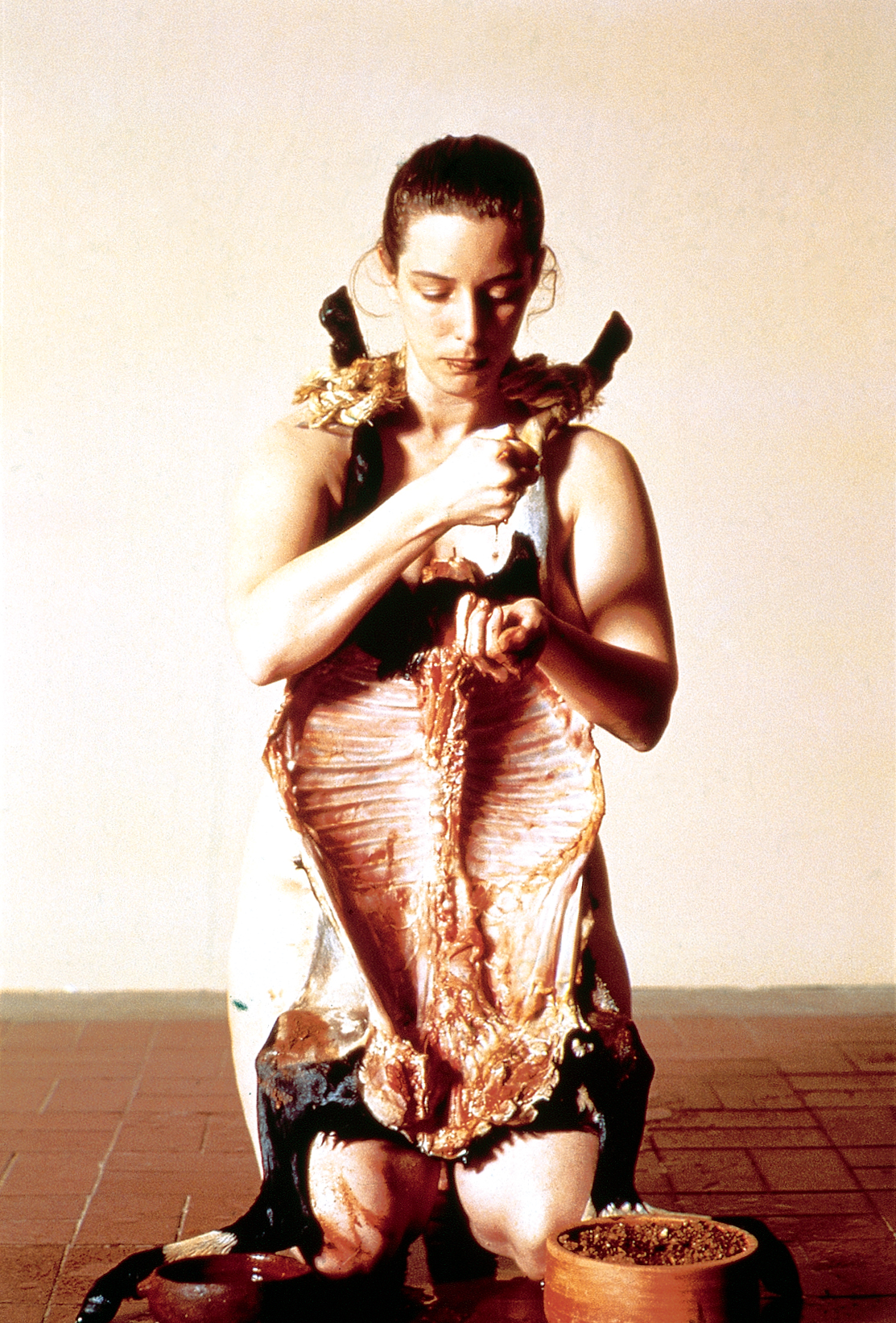 The personal and experimental feminist art practices of Ana Mendieta were a huge influence to Cuban performance artist, Tania Bruguera. For “La carga del pecado (The Burden of Guilt),” Bruguera drew upon the legend of the mass suicide of a group of indigenous Cubans who supposedly ingested large amounts of soil in an act of resistance to the Spanish. In the 45-minute performance piece, Bruguera consumes soil mixed with salt water while a lamb carcass hangs from her head, a literal interpretation of the phrase “comer tierra (to eat dirt)” and a reclaiming of the narrative around the denial of agency to Cuban people throughout history. On view is a large photo documentation of the artist’s 1998 performance in Venezuela.

Though many of the artists interrogate gendered violence, oppression, and civil unrest, “Queenie” is not inherently a political show. Instead, each artist’s individual gendered experiences prompt a dialogue around societal change, cultural identity, and the politicized body. By not reducing all the complex artists in the show to a single trope, “Queenie” manages to bring together artworks from very different periods of time and cultural conditions that, for one reason or another, have been mistakenly overlooked by history.