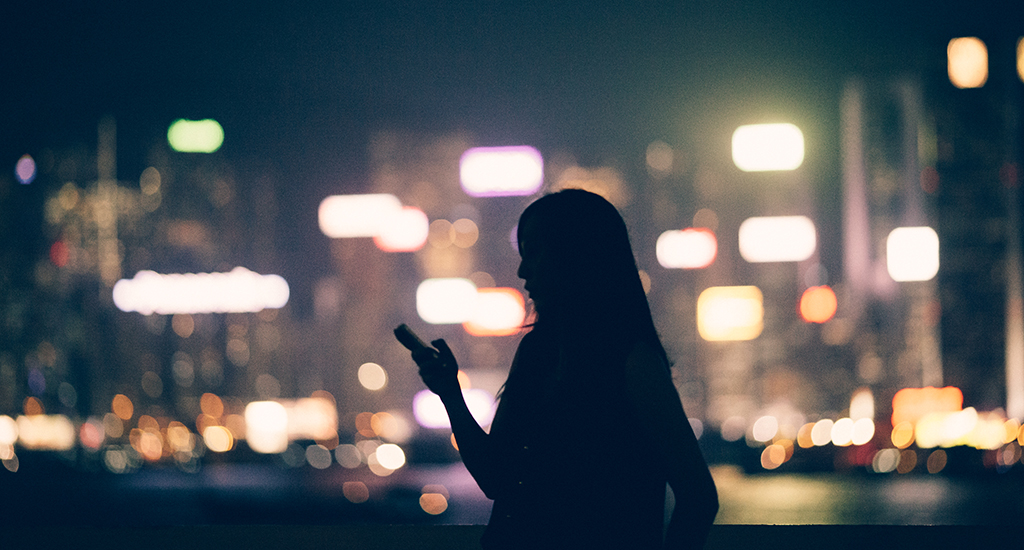 Social media is often criticized as a symptom—or maybe even a cause—of social isolation in our society. Spending too much time online is supposed to make us awkward, uncaring, and unable to properly connect with other people in the real world, or, as some alarmists put it, make us “autistic.”

As an autistic person who spends a lot of time online, I find these generalizations unfair for two reasons: 1. Those of us who have this complex and minimally understood neurodevelopmental disorder might not socialize the same way that our non-autistic counterparts do, but that doesn’t mean that we don’t care about other people and don’t want to interact with them at all; and 2. Social media has actually helped me to connect to other people and maintain important relationships in my life. I’ve also watched my fellow autists use it as a platform to help establish a sense of community, lend each other moral and monetary support, and organize activist projects. 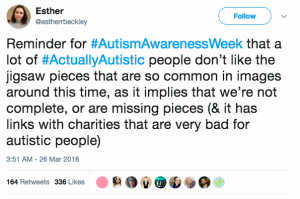 On Twitter, in particular, autistic people from all over the world, of all different needs levels and identities, are able to connect with each other through the #ActuallyAutistic hashtag and make a space for ourselves to be able to talk about our own lives and experiences when so much of the conversation around autism is still dominated by non-autistic experts and parents. We can also reach out to each other—and to non-autistic people looking to better understand and support their autistic loved ones—with any questions we might have via the #AskingAutistics created by autistic advocate and writer Neurodivergent Rebel.

At a time when both understanding and resources for autistic people are scarce, this loose-knit online network has stepped up to fill the gaps in mainstream autism initiatives. When a large portion of research on autism still focuses on searching for its causes, we work together to try to figure out parts of our lives that few have ever even thought to study yet, from how to navigate certain social situations to whether or not we might react differently to hormonal birth control than non-autistic people. While we watch major charities fund the search for a cure over programs that might improve the lives of autistic children and adults right now, we provide makeshift therapy services to each other and piece together what limited funds many of us have to make the day to day lives of our fellow autistics at least a little easier to manage. 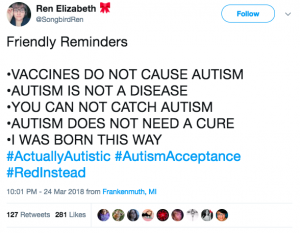 “Autistic twitter is the one place I feel completely accepted and at ease to be myself. I have made many friends and gotten so much support from the community. And because it is international and across time zones, there is always someone available to help me no matter the time of day, or night,” Melissa Murphy, an autistic twitter user from Ireland, tells me via email. “I hate how people ‘technology shame,’ if that’s the right phrase. Online friendships are just as valid as offline ones and in my case, like a lot of autistics, they are the only ones I have. Remove my technology and you remove a huge source of support in my life.”

In addition to helping out autistic people with food and self-care suggestions, Murphy has also responded to queries from non-autistic parents through #AskingAutistics. “I think it helps that I’m both autistic and a parent so can approach a problem from both angles as it were,” they say.

Like me, Murphy also counsels particularly vulnerable acquaintances via direct message. “I have had people come to me who are suicidal. They often cannot ask for support publicly as twitter punishes people for that. Also often people need to vent after bad interactions with non autistics or after receiving abuse, including death threats. Sometimes I can’t help much directly but even providing them a safe place to vent helps I think.”

They’ve reached out to other autistic friends, too. “I have also DMed people asking for advice for example when I’m not sure i understand what someone has said to me. They help me ‘translate’ NT [neurotypical] language as I sometimes take things too literally. So it’s nice to be able to DM a trusted friend and ask their opinion on things like that.” 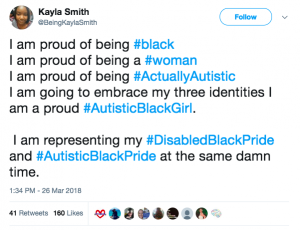 @EbThen, an autistic activist who provides some of the most thoughtful and detailed threads about autism-related issues on Twitter and runs @SJwishlists, an initiative that helps to put material and financial support directly into the hands of marginalized folks with specific needs, believes that social media is an integral tool for their work.

“Without Twitter, there wouldn’t be any work. As someone is who is physically isolated for various reasons, Twitter is where I’ve found my community. I try to support my community, and the community has supported me back,” Eb tells me, also via email. “I think everyone who subscribes to my Patreon and therefore subsidizes the @SJwishlists knows about me because of Twitter. Twitter’s design makes it fairly easy to share requests from folks in need. Even though many of us are on limited incomes and don’t have a lot to give, we can retweet and hope that, in signal-boosting, requests find people with the resources to help. That’s important to me.”

Eb believes that a social media platform like Twitter has a unique ability to facilitate communication and activism in our community. “Twitter has the potential, in fact, to be an ideal platform for Autistic organizing (and Disabled organizing in general). The set-up is pretty great for Autistic people who need time to put our words together, find in-person, spoken interaction with others overwhelming, or benefit from the discrete nature of tweets and the flexibility of threads,” they explain. “It’s not that we don’t care about other people. It’s just that a lot of what the rest of the world considers valid social interaction is really overwhelming and difficult for so many of us. In more accessible environments, we tend to build thriving social… networks.” 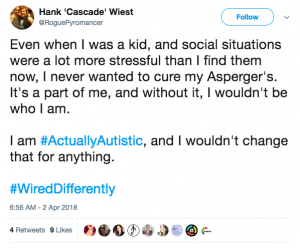 Far from turning us into an antiquated stereotype of autistic people who lack empathy and have no interest in engaging with the outside world, social media has allowed many of us to express just how human and invested in the outside world we truly are.

“The idea that Autistic people aren’t interested in connecting with and supporting others is just silly. Sure, we can find interacting with others exhausting, but we’re people who have often been excluded from social interaction because of overwhelming inaccessibility—not because we don’t care. There’s this really old, bad idea out there that Autistic people lack empathy. It relies on ridiculous stereotypes about Autistic people and a mistaken idea about what empathy actually is,” Eb says.

“Empathy is really an involuntary reaction to stimuli—and there’s more than one kind! Autistic (and non-Autistic) people have hugely varied empathy responses, and it doesn’t mean we don’t care about others. There’s this idea that people who don’t experience ‘appropriate’ or ‘typical’ empathy are less decent to other people. But that’s silly. We don’t really need to fully comprehend how someone else feels or even experience sympathy or compassion or sadness to be decent to someone else. We just have to not want to harm other people.”

If anything, Eb points out, autistic people might be more interested in fairness and justice. “Autistic people also, in my experience, tend to have very strong senses of justice, possibly because so much of our lives involves people treating us unfairly for things out of our control. How we deal with this varies, but I’m connected with many Autistic people on Twitter who spend a lot of our lives working for social justice.”

Sarah Kurchak is a writer and autistic advocate. She has written about autistic issues, music, movies, and mixed martial arts for Vice, Huffington Post, The National Post, The Toast and Consequence of Sound.

Concert in the Classroom: Using Music as a Cultural Gateway