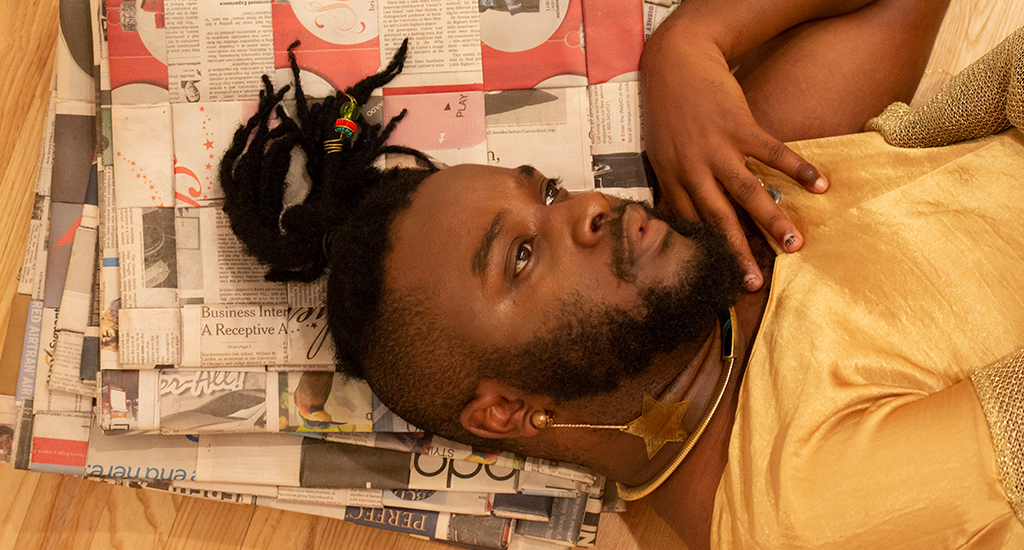 Since Abdu Ali built a stage and walked into the center of it, Baltimore hasn’t been the same. Now, six years later, the multifaceted rapper is ready to make a formal debut in music after years of organically crafting a scene in the historically segregated city. Abdu Ali is a musician who curated a fan base through creating a party called Kahlon; effectively going from party thrower to performer. It hasn’t been an easy road to carve out, as there is still no blueprint for black gay rappers. But right now Abdu Ali seems to be hitting their stride.

Abdu has toured throughout Europe and graced a variety stages in the States this year from the MOMA PS1 Sunday Series to the Millennium Stage at the Kennedy Center. But perhaps the biggest accomplishment has taken place in their hometown of Baltimore. The Art After Hours show at the Baltimore Museum of Art this past June celebrated the work of multidisciplinary artist Jack Whitten, the theme was Afropolitanism, a movement that emphasizes the international influence of African arts and culture. And fittingly, Adbu Ali performed. 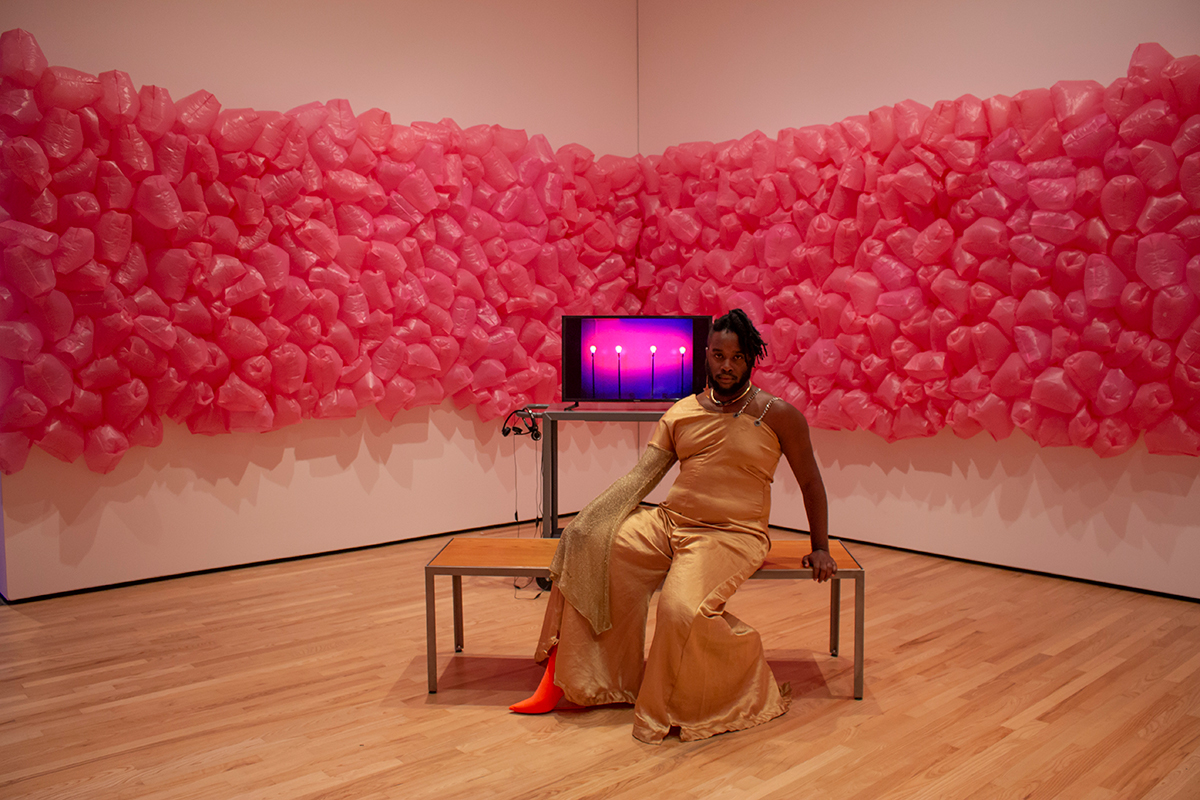 “Performing at the BMA felt iconic. It’s been a recent goal of mine to start having performances in more art focused spaces like the BMA because I feel like my work will be received better. I think it’s important for artists to be specific about where their performances are placed because that sets a tone of how people view your work and environments affect the message of your music,” says Abdu.

Self actualization, chaos and righteous anger are the more consistent themes in Abdu’s music. Sonically they have infused so many genres that it’s hard to keep up sometimes. And although Abdu might be marginalized by the rap community, they don’t create within the boundaries in their music. They’ve also recently decided to step away from the gender binary this year, “life update; my gender: butch femme. If you don’t know me it’s they. never felt like a them. no shade.” (taken from Abdu’s IG account)

The change in pronouns isn’t a surprise to those who are familiar with Abdu’s music, KingQueen has been a moniker for a while, and one of the more popular chants during their live sets is “Am I boy or a girl or America’s fuck toy?” Their new album “FIYAH” will feature never before recorded crowd favorites plus a return to their original sound, Baltimore Club music. Thanks to a studio residency in New York, Red Bull Music Academy membership and being awarded the Ruby Grant in Baltimore City, it seems like Abdu Ali will finally start to see a real return on all that they’ve invested in their music career.

The Baltimore native started his journey in music in 2012, and before that studied journalism at the University of Baltimore. Writing is more intimate to Abdu and something they see themselves pursuing more formally once they’re older. “Writing takes a lot more mental and spiritual labor than music,” says Abdu. “And that’s how I know I’m supposed to do music before anything else. Writing lyrics and melody and performing and all that—BAM—I can do that like it’s nothing.”

But Abdu’s music is still heavily influenced by writing. Abdu switches between singing poetry over industrial or Baltimore club influenced beats to spitting ballroom chant like bars. Their music is self focused and affirming. It’s all about loving yourself, taking up as much space as you can and liberation. It’s quite fitting that the next album will be based on “FIRE” the niggerati zine from the Harlem Renaissance. When asked who they most identified with from the era of black artists making a name for themselves in the world, Abdu replies, “I think I’m Wallace Thurman, cause he was buck.” 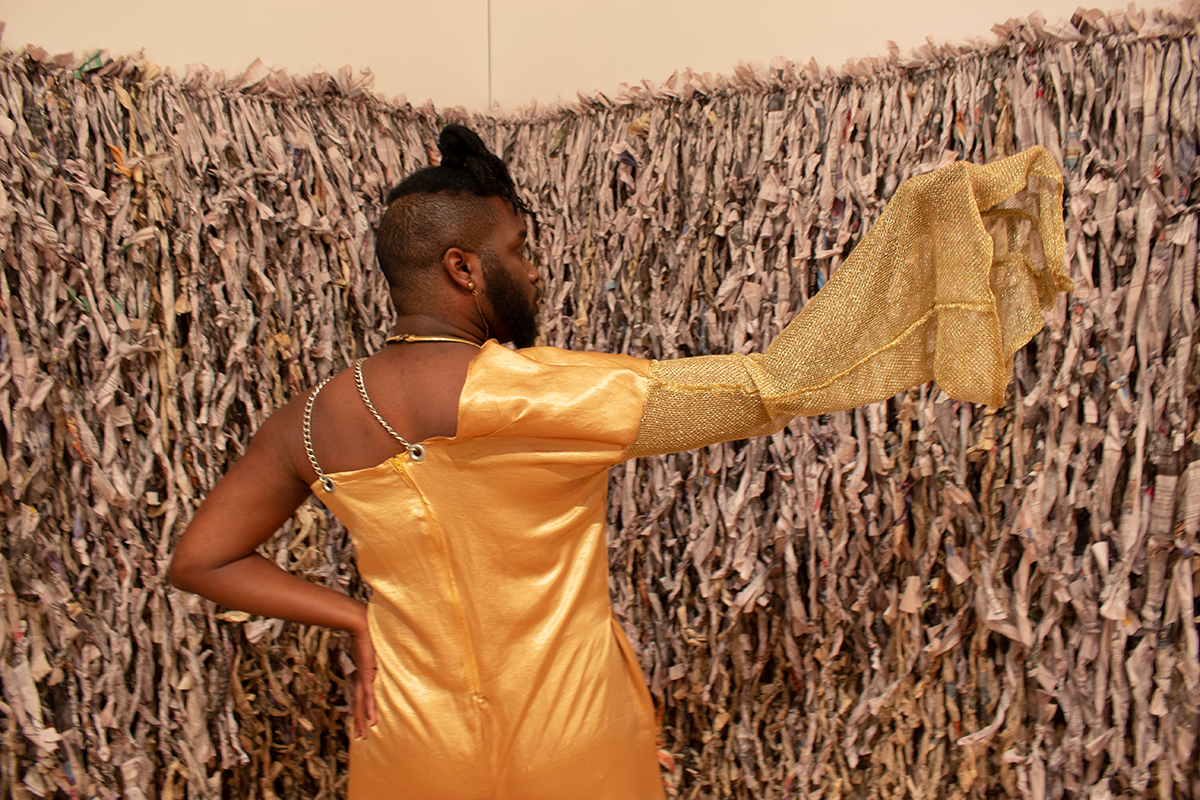 “Buck” is only one word that can describe what Abdu Ali is. Abdu thanks their Gemini moon natal placement for the overflow of ideas and projects they are always pursuing. “To survive, you kinda gotta be good at 1000 things. And because of the internet, our generation gets to see that we can do multiply things. So I compartmentalize to stay organized.”

If Abdu isn’t making music, they’re producing a podcast, curating parties or writing literature. “Writing short stories and poems doesn’t really give me a rush like music does. But I do realize I get a rush out of curating parties,” Abdu says.

Abdu Ali and Lawrence Burney started throwing parties together in 2012. At that time, there was nothing like Kahlon in Baltimore City. “People was desperate for the shit. We filled a specific niche of underground alternative music artist, specially black and brown, specifically queer, specifically women. We never had an unsuccessful Kahlon.” 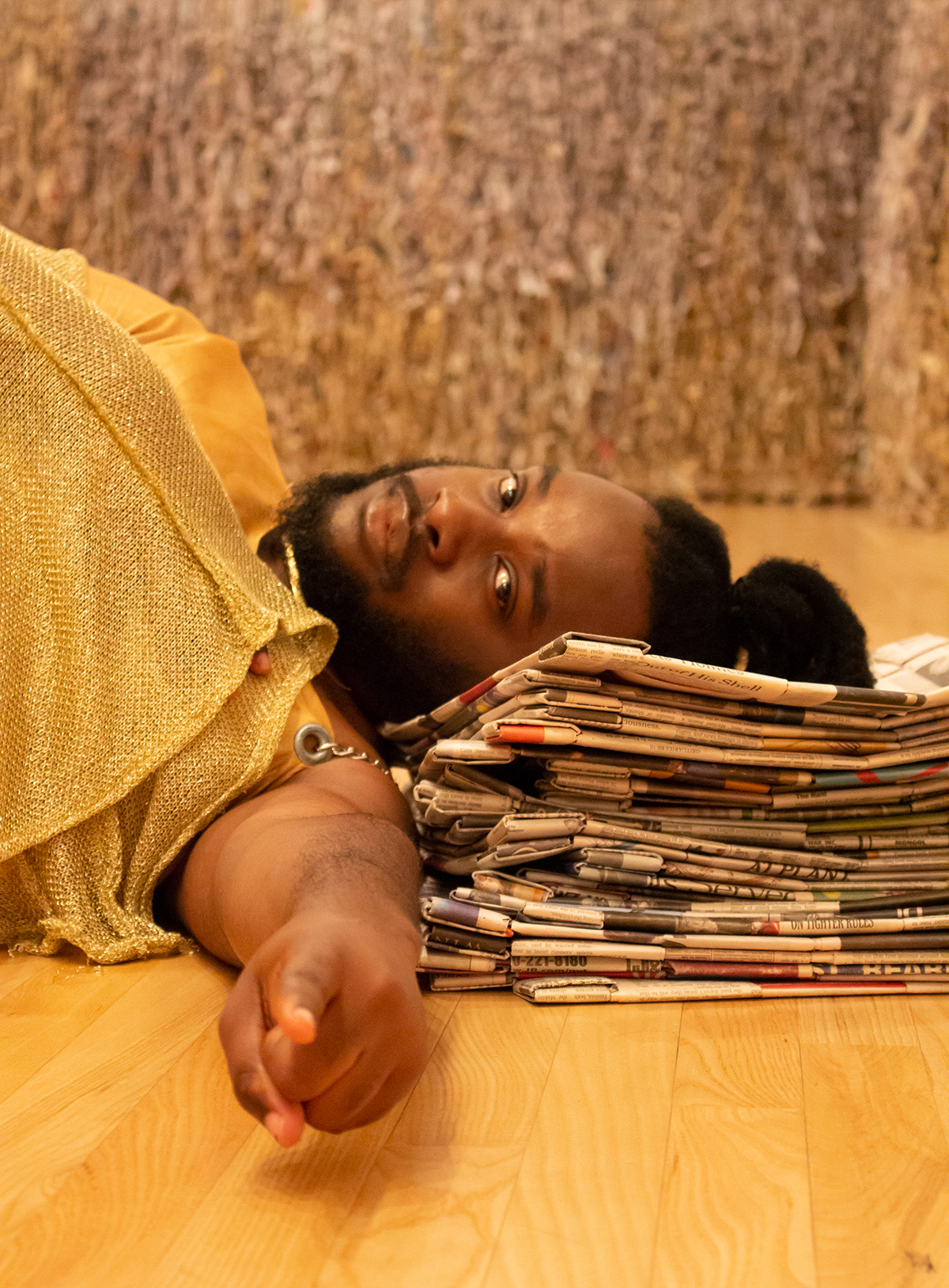 At the time, hard lines were drawn in the city. Most shows were either rap, or rock, black or white, straight or gay and Kahlon was a mix. Baltimore has so many micro pockets of community that it was only a matter of time before they would overlap. But it would take an adventurous soul to heed the call and give the city what it didn’t even know it needed. Despite being a city with a rich history of producing genre defining musicians, the reputation of being a hard crowd impacts who tours there. The popular anti-black pro-gentrification narrative that “no one is here” (Governor Hogan left the city out of a map of Maryland in 2015) haunts the nightlife. To prove how wrong that idea is, Abdu and Lawrence began to target the 51 colleges and universities in the city.

As the popularity of the party grew, people were coming from all over to experience an authentic underground show as the famed scene in New York City began to falter thanks to gentrification. Alumni of the party include and are not limited to, electronic musician Dan Deacon, noise rapper Blackie, JunglePussy and the late Lor Scoota. 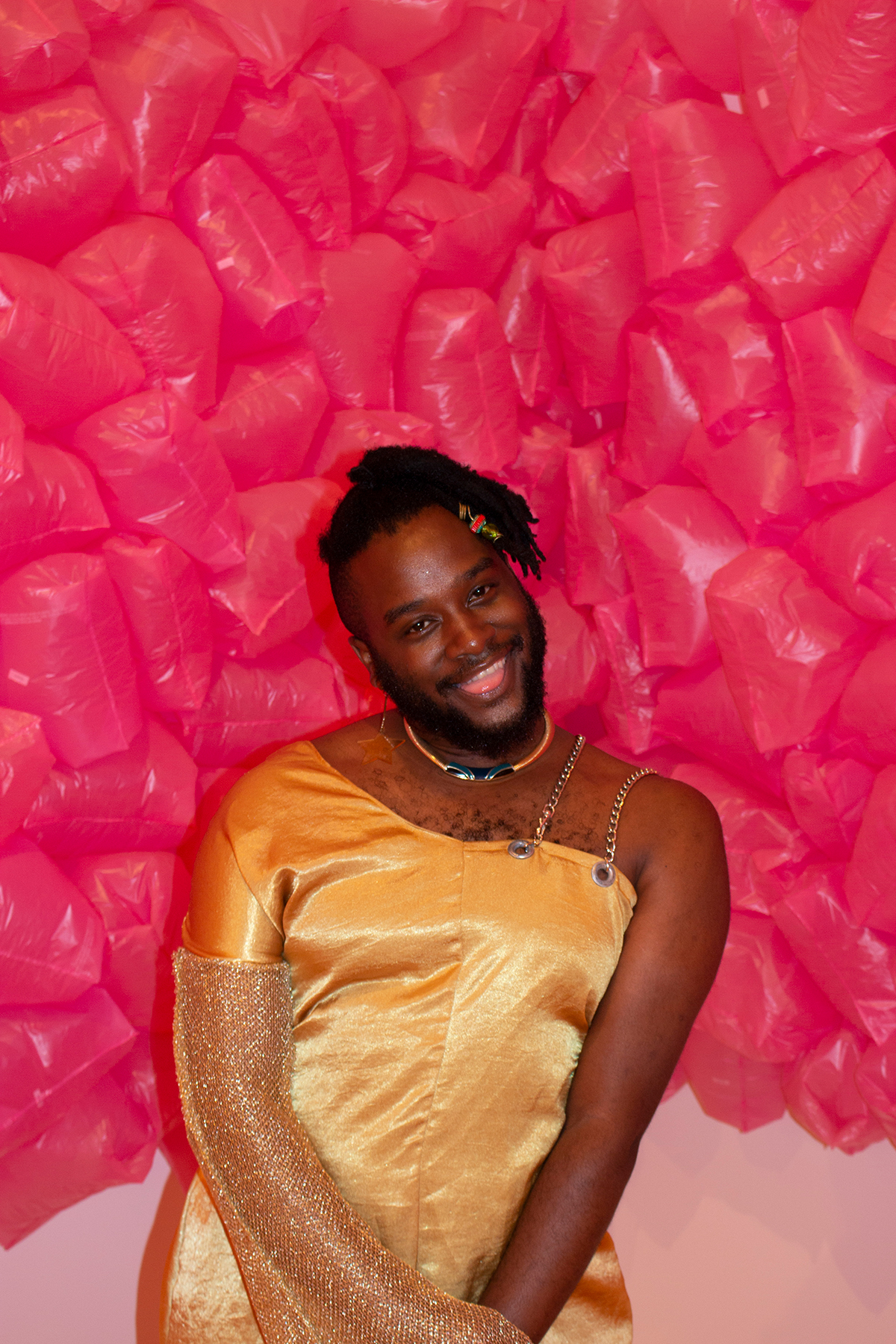 Now, Abdu wants to use Kahlon to once again shift the creative climate in Baltimore city. “I’m tryna plant little seeds and assemble a little crew for Kahlon to be more than shows. Maybe we’ll start representing artists, or producing special music events for album releases or shit like that. It could be a creative agency/label/production company.”

The last Kahlon production was GayCon a major party during the city’s Pride celebration which they co hosted with Grl Pwr another queer collective in Baltimore City. Juggling Kahlon, the Agency and a debut studio album would seem intimidating to some, but this is right on time for Abdu Ali whose been pushing and slaying for over five years to get to this very moment.

Abdu Ali photographed by Katelyn Brown at the Baltimore Museum of Art in the Maren Hassinger The Spirit of Things Exhibit. Creative Direction by Nia Hampton.