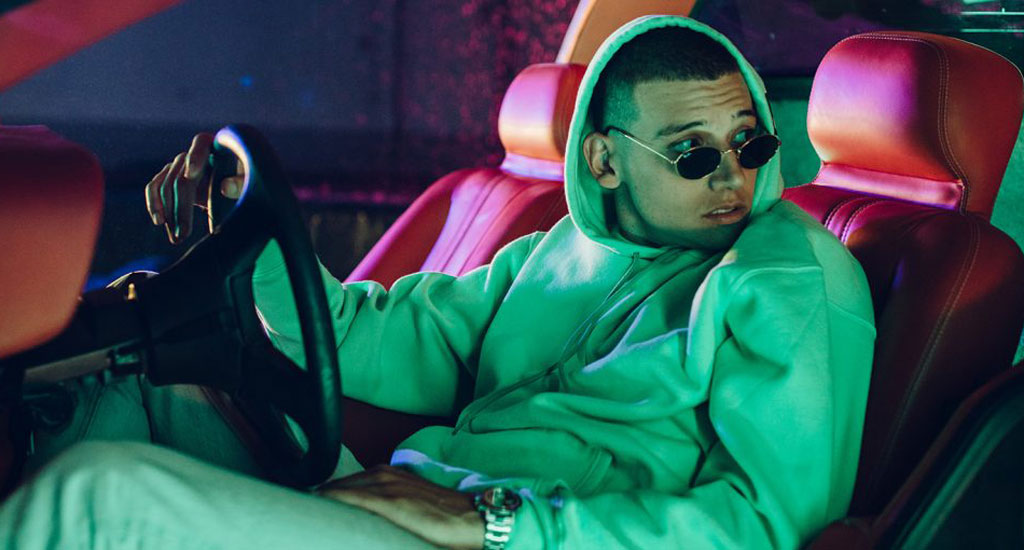 Sky Rompiendo always knew he wanted to make music. The Colombian mega-producer first fell in love with hip hop as a teen and used that sonic inspiration to later create some of your favorite reggaeton songs to date.

“I used to go to Tower Records in Medellin, and the only thing that I could reach was hip hop,” he says over Zoom from Miami.

Sky, born Alejandro Ramirez, grew up between Medellin, Colombia and Miami. Like most people who spend their formative years vacillating between two cultures, he would bring back the sonic landscapes he heard from one place to the other.

During his adolescence, he remembers the parties he would throw and how he would introduce the reggaeton he heard back stateside to his peers in Medellin. Like most kids around that time, they fell in love with the melange of street Caribbean beats and steamy lyrics.

“I started making reggaeton songs and putting people in the songs.  I was throwing parties at 13-14 years-old with speakers and lava-lamps,” he laughs. “I was the producer of those events.”

Years later, Sky would go on to produce for one of Colombia’s biggest reggaeton superstars, J.Balvin. The two met when Sky was 18 years old and have been friends and co-workers in the studio ever since. Sky is responsible for creating “Ginza,” one of Balvin’s most successful singles to date. Billboard reports that the song spent nearly 22 weeks at No. 1 on Billboard’s Hot Latin Songs Chart.

“I thought, why not go back to reggaeton? Because when all is said and done, it’s part of our culture as Latinos. And finally, the song was so hooky, it worked,” Balvin told Billboard in 2016. “Let’s be honest, ‘Ginza’ doesn’t really have lyrics to speak of. It’s a party track—a party for reggaetoneros to come out of the closet.”

With its entrancing video game sounding beat and slow tempo rhythm, “Ginza” has a chill presence in a sea of more fast-paced reggaeton songs, like in comparison to, let’s say,  Yandel’s “Calentura.” On it, Sky and Balvin set a laid back ambiance that still has a way of making you want to get up and dance.

Amid the recognition the song received, it wasn’t always easy to get Balvin and his record label to agree on making the record. Sky recalls that it took a year for the project to come to fruition.

“First time he [J. Balvin] heard it, he stopped it before it ended, and he was like, ‘Nah, I don’t want to listen to that,’ ” Sky remembers.

“I got mad but in a good way, and I was like, ‘Nah, you’re going to listen to this, sit your ass down and listen to this again.’ ”

Those creative instincts have catapulted Sky to becoming one of Latin music’s most sought after producers. In addition to working with Balvin, he’s also produced for Karol G, Bad Bunny, Jhay Cortez, Rauw Alejandro, Nicky Jam, Rosalia, Travis Scott (for “TKN”) and Juanes—not to mention he’s won six Latin Grammys. Like for J. Balvin’s “Ay Vamos” in 2015 for Best Urban Song and his Energia album in 2016 for Best Urban Music Album.

So what advice does a veteran producer like Sky Rompiendo have for anyone interested in walking in his footsteps?

“You might make a lot of songs that don’t do well, but if you stay in your lane you never know when that sound is going to work,” he says. “You don’t want to end up sounding like another producer or another beatmaker just because you want to be like, number one.”

Albeit playing a live set is different than making sonic concoctions in solitude with endless time. “Being a DJ is so different [from] what I’m living every day,” he says. “In the studio, I can make mistakes and edit, but I cannot do that live. It’s a lot of pressure.”

Last year, he performed at the event as well and told Remezcla this about his set: “The music that I like to put on in parties is more movida,” Sky said. “It’s music that doesn’t necessarily have to comply with the commercial norms. I believe it explores more of the world and different countries that you’ll hear in a Sky set with artists who aren’t well known yet but who are important to me.”

Sky’s appeal is his willingness to test unfamiliar waters and still make a hit record while getting the party started at a live club—simultaneously, while feeling pressured or not.  At just 28 years-old, Sky has accomplished a lot. And he isn’t planning on stopping anytime soon.

Next year, Sky is working on releasing an album filled with A-list talent and new beats. Rompiendo will be putting his talents at the forefront by showing the world he’s the main star of this compilation—with zero limits.

Femmeton Take Over: Revolutionizing and Politicizing Music with La Doña