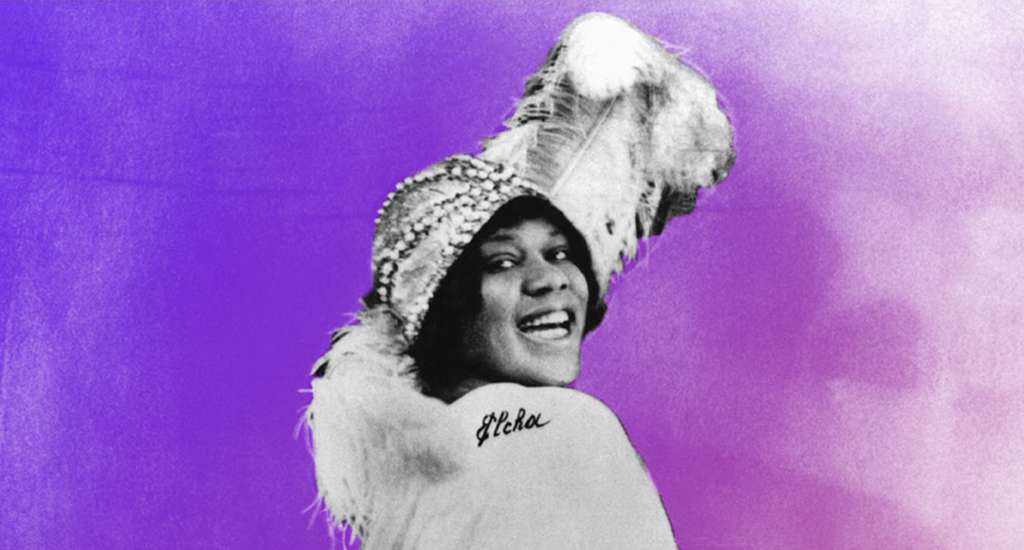 The crowned “Empress of the Blues” was a bisexual Black woman who once chased off the KKK from one of her performances. Her name was Bessie Smith, and her wide catalog of musical feats earned her a spot in The Rock and Roll Hall of Fame—inspiring the likes of Billie Holiday, Aretha Franklin, and Janis Joplin.

Born into humble beginnings in Chattanooga, Tennessee in 1894, Bessie began performing when she made her first public appearance at the age of nine. Just one year later, both her parents had died, and she quickly learned to fend for herself, earning money from small singing gigs. By the age of 16, Smith had joined Ma Rainey—“Mother of the Blues”—as a dancer on her traveling show. Ma became a matriarch and mentor to Bessie, who stayed with the show for three years as Bessie expanded her performance to include both dancing and singing.  During her time with Ma, the soon-to-be star developed a fan base of her own and began touring in her own show soon thereafter.

Bessie’s wide catalog of songs expressed the good, the bad, and the ugly of the human experience, and her powerful voice and keen showmanship earned her lots of fans and sold-out shows from coast to coast. Finally, in 1923, the blues artist signed to Columbia Records, and sold 780,000 copies of her first commercial release, “Downhearted Blues.” Within just 10 months, Bessie had reportedly sold two million records, making her the most successful blues artist of the time. Her range and authenticity cultivated a unique career that never lacked a dull moment. She was openly bisexual, dating both men and women, and ended up in a tumultuous marriage with Jack Gee—a man who would eventually become her manager. But Bessie was as much of a fighter as she was a lover. In 1925, she survived a stabbing by an enraged man in her hometown of Chattanooga, Tennessee. And in 1927, when members of the Ku Klux Klan showed up to one of her tent performances and began tearing at the tent stakes, Bessie stormed off the stage and confronted the men—shaking her fists and ordering them to leave. Deterred by the verbal beat down, the men left and Bessie returned to her show.

But Bessie’s biggest calling card was her soulful voice and relatable music. She continued to remain on top of the blues charts until the Great Depression, when she found herself without a record label. By the end of her career, she had a catalog of 160 songs that featured some of the best musicians of the time. In 1937, Smith died from a car accident while driving with her then-partner, Richard Morgan. The two were in Mississippi when their car rear-ended a slow-moving truck and rolled over—crushing Bessie’s left arm and ribs. Her arm was nearly severed and she bled to death before reaching the hospital. Thousands came to her funeral to pay their respects to the “Empress of the Blues.” Though she was buried in an unmarked grave, some 30 years after her death, the singer Janis Joplin, along with a longtime fan of Ms. Smith, bought a tombstone for her unidentified grave—it read, “The Greatest Blues Singer in the World Will Never Stop Singing.” And even recently, more than half a decade after her passing, Bessie’s story continues to be shared. In 2015, HBO released a biopic about Bessie’s life, directed by queer filmmaker Dee Rees and starring Queen Latifa as Bessie. It introduced a whole new generation to Bessie’s story—the story of a cultural pioneer who was ahead of her time, of a musician whose authenticity helped her to not only reach success, but to also embody and push forward the American story.

The Dynamic Dance of Double Dutch