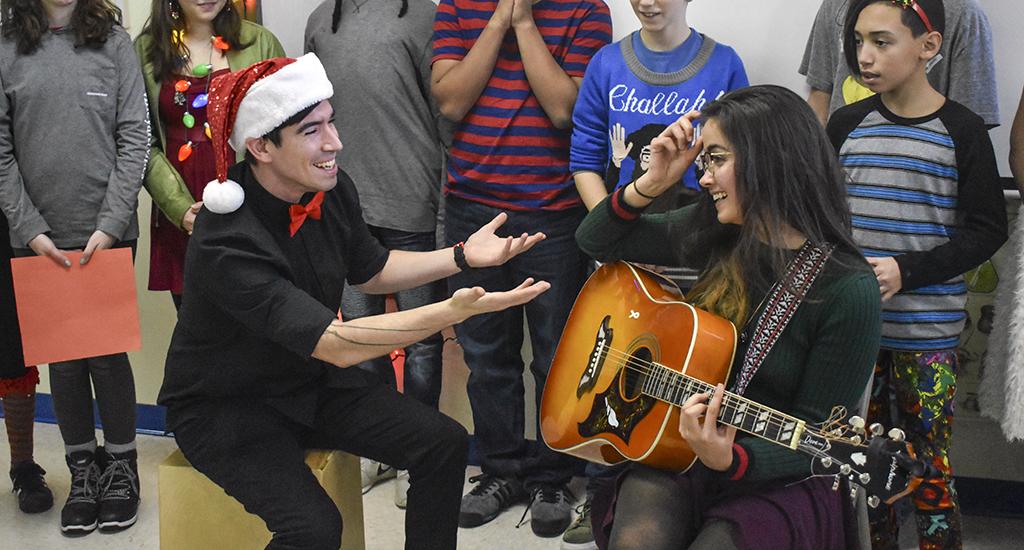 Concert in the Classroom: Using Music as a Cultural Gateway

Music is a tried-and-true mnemonic device; we’ve all benefited from the effectiveness of song in memorizing information. (The alphabet song, of course.) But there’s a Spanish teacher in Massachusetts putting that tool to comprehensive use with a fresh update. Any given day, David Durán rallies his students: ‘¡Somos una banda!’

Thirty seconds into a number from the electro-tango group Bajofondo—originally an instrumental, it’s uniquely arranged by Durán with lyrics conjugating the verb ser—and evereybody’s headbanging. Durán sturdies himself in a metal stance for borderline whiplash fury, then begins circling the room dancing, jumping, clapping, and fist-pumping. A giggle or two barely escapes; the volume’s up, the guitar shredding is intense, and the kids are actually participating, singing loudly along while their teacher runs wild.

His method is a “cooperative kind of learning.”

“We’re doing this together,” Durán says. “I really tell them, somos una banda. We are a band, and we’re going to do this together, and every single voice counts.”

Employing the same process of co-writing in his own band, an experimental rock outfit called Eyes, Durán makes a collaborative effort of every lesson. He even leaves his arrangements open to edits from his middle and high school graders. Together, they nail the performance.

“It’s more fun: I’m a part of something now!” he says. “It gives it this personal connection. It gives it a meaning, and ultimately I think music makes language come alive in a new way, in a different kind of way.”

There’s strategy in the song selection, too. His lessons are based on bonafide jams: A J Dilla produced cut for power-funk act Lettuce guides students through the forms of the spanish verb tener in present tense, and in teaching ways of expressing emotions, there’s the longstanding Gorillaz hit, “On Melancholy Hill.”

Durán experienced the powerful correlation of music and memory firsthand through his grandmother, who had dementia late in life. Family was unrecognizable, her mind and ability to communicate were fading—but (like a scene from a film we won’t spoil here) at the sound of melodies she’d written in her younger years, she was present. She’d hum along as David and his siblings played her music. 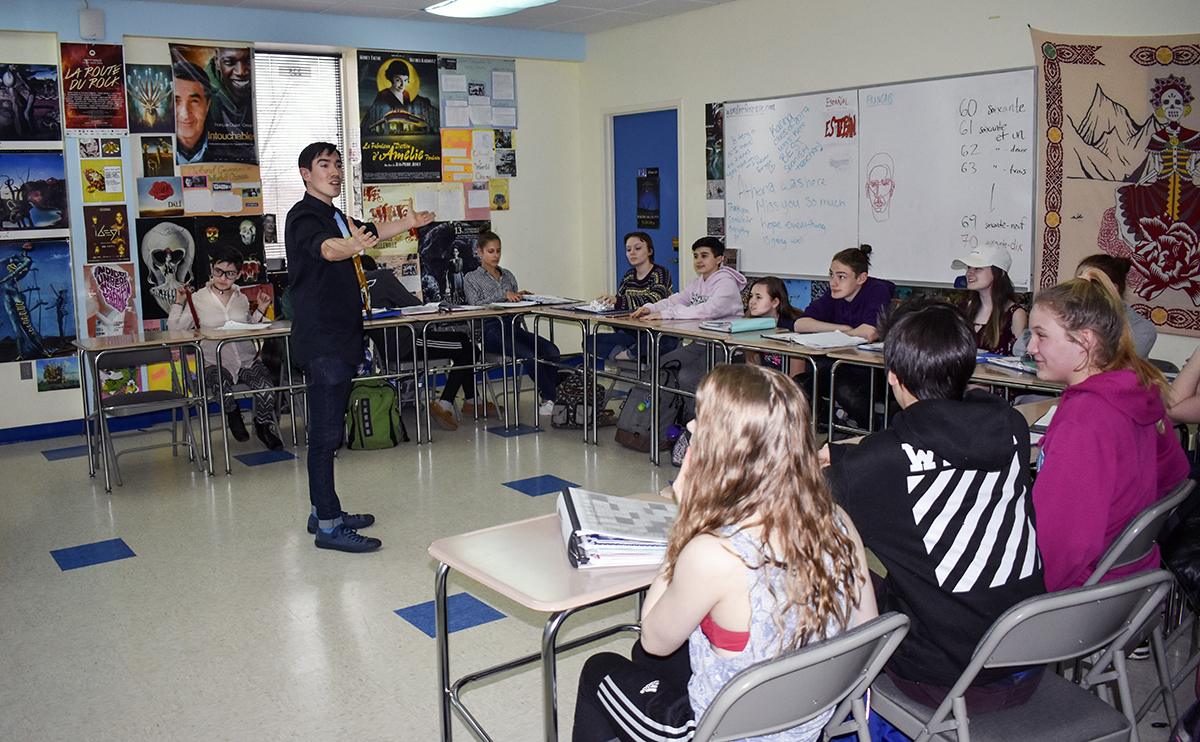 Spanish education the Durán Way expands well beyond the traditional structure—which he found early on in his 9-year career didn’t work for him. He highlights a different Spanish-speaking part of the world each day, helping students understand the vastness of the language, the varied cultures in which a multitude of dialects are spoken, and where those places are located.

“I pull up Google Maps on my projector and they go to the actual map of the world and they pin it down, exactly what we’re looking at,” he says. “It’s important; they have to know.”

Music is the jumpoff there as well: Bomba Estéreo, for example, segues into discovering the band’s native Bogotá, Colombia.

“That’s one of the bands that hooks them right away, the song ‘Soy Yo.’ It’s perfect because it’s one of the first expressions we learn as we get into the verb ser. Soy yo—this is who I am. And that video is really powerful,” he says.

Ana Tijoux leads to Chile learning, Calle 13 and Cultura Profética are a gateway to Puerto Rico, and Natalia Lafourcade and Rodrigo y Gabriela transport kids to Mexico—another day, another band.

Durán’s students, who range from middle to high school grade, are not only absorbing language, but also linking that language to actual life. Exposure to contemporary artists, whether mainstream or an obscure Argentinian punk band, offers enlightening glimpses at modern-day Spanish-language cultures. It broadens their scope of music and its endless possibilities, too.

This year is Durán’s fifth at Pioneer Valley Performing Arts, a South Hadley public charter that culls arts-focused students from 60 towns and cities throughout western Massachusetts. “Some kids drive two hours to go to this school,” he says.

PVPA doesn’t share the same demographic makeup of its location. South Hadley is about 90 percent white, with the Latinx population of 4.3 percent—in 2000, that was fewer than 800 people.

Durán says PVPA students are a diverse bunch. At nearby South Hadley High School, however, minority enrollment totals only 16 percent.

Two years ago, the school invited Durán as a guest speaker. He didn’t bring Bajofondo or Gorillaz along, but instead centered the talk on travel. 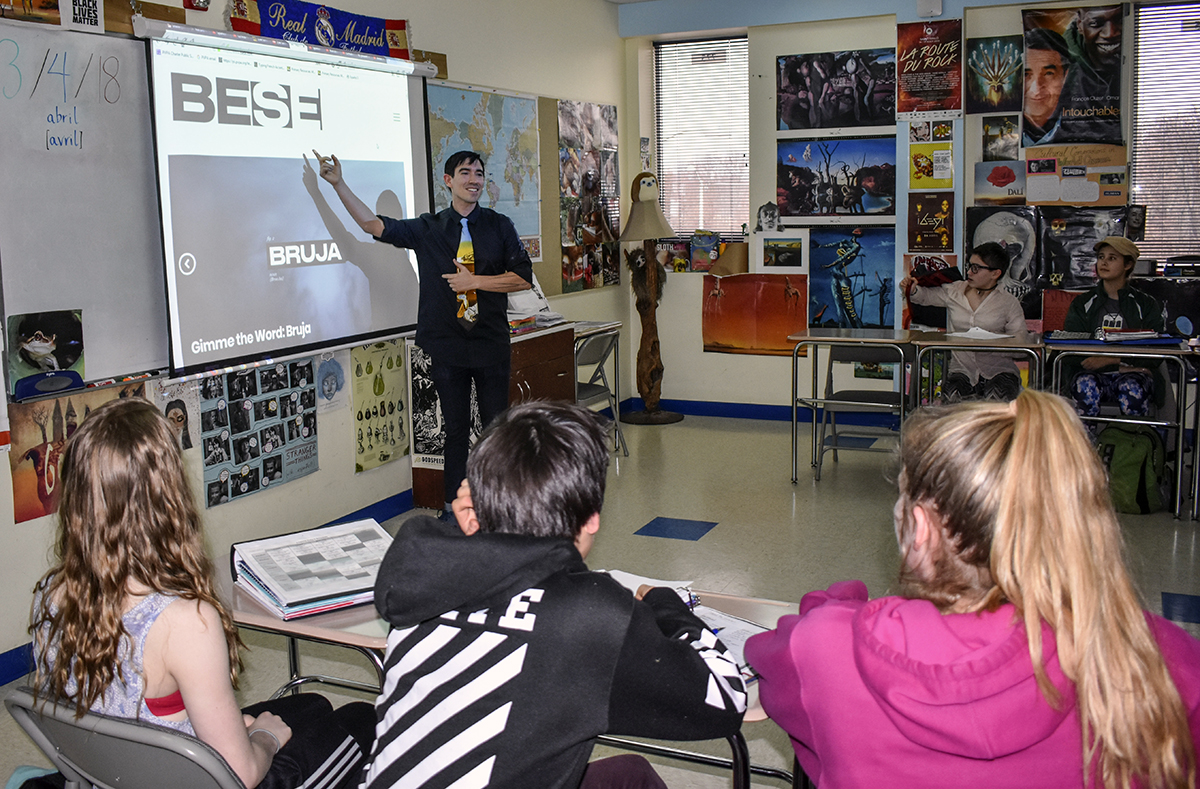 Durán was born in Madrid; his Spanish father and Boston-bred mother relocated the family to the states when he was a teenager. The influence of dual cultures was impactful: “It made me more open, and more accepting to different ways of living and different perspectives I think from a very, very young age.” He’s traveled as much as possible since: France, Costa Rica, Mexico, Switzerland, Portugal, Belgium, Iceland, and more.

While Durán was living in Ghana, he once wandered into a village uninvited, bypassing its chief: “I shouldn’t have done that,” he stresses. But the sounds of stick drumming had drawn him in.

“I did not speak that village’s language, not one word, and they did not speak any English, Spanish, French, Italian—any languages that I know. I was there for hours; we were playing and communicating through music…I know a lot of people that have had this similar experience in different parts of the world, or even in this country. You have two people that do not speak the other’s language, yet they’re having a conversation through music.”

After Durán shared his travels at South Hadley High School, kids lined up to express their newfound enthusiasm for worldly exploration.

He makes a lasting impact at PVPA as well—through the music, and because he makes a point of personally connecting with every single student, even kids who are shy or tend to withdraw. In “off moments,” students can take a break, and return when they’re ready. And his own behavior in class—quirky and sometimes over-the-top, his own “weird self”—offers a model of openness, self-confidence.

“I don’t want them to feel judged. I want them to be entirely who they are, and once that’s happening, then you create a safe, comfortable learning environment where they can genuinely feel supported,” he says.

Language is an opportunity to connect to culture; that’s not always taught in depth, or with real examples that make indelible impact. Rather than stale textbook routine, Durán’s method is dynamic; it’s based in authentic life right now. All the darkness of the messages kids might receive from supposed leaders and public figures, all the hatred and bigotry and bias—it’s all transformed. Durán presents differences as brilliance, every culture a shining fleck in a collectively radiant world. And using some of the incredible music that world produces today, from electro-cumbia to punk to reggaeton and hip-hop, shows how undeniably true Durán’s perspective really is.

Why I’m on Mission to Protect Farm Workers