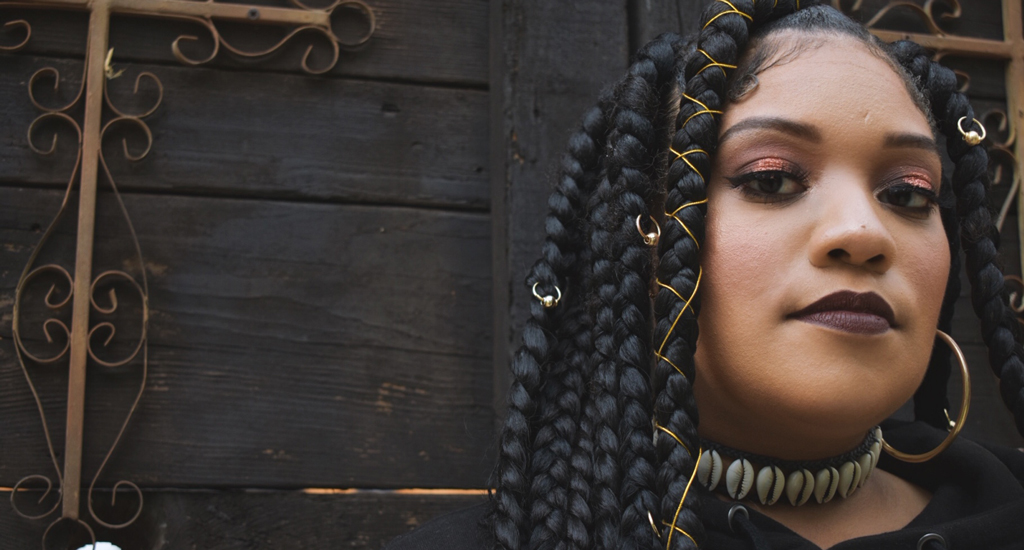 “Daily Show” Writer and Comedian X Mayo Isn’t Waiting for a Seat at the Table, She’s Building Her Own

X Mayo is not sitting around and waiting for someone to make her a star. She’s doing it all on her own.

“I was never waiting. I don’t know how to do that,” said Mayo as she reflected on her career. “My lack of patience works for me in my career. In other areas it’s kind of like, ‘Okay, I need to be patient.’ But in my career I’m like, ‘What the f—. Fine. I’ll write it and shoot it. Let’s go.’”

The Emmy-nominated writer and comedian is the creator of one of New York City’s most diverse comedy shows, “Who Made the Potato Salad?”— a cookout comedy show produced and written entirely by artists of color, for people of color.

The unique show combines all the classic food of a cookout with music, dancing, and jokes. Mayo created the show after she grew tired of not being cast in other sketch comedy shows around New York.  Perhaps a blessing in disguise—since its premiere in 2017, the show has sold out all over the city.

“You’re never going to forget an event that you came through that was produced by me,” said Mayo. “If you are like, ‘Oh my god, I’m so quiet and it’s too loud. I can’t do it.’ This is not a show for you. I’m being honest. The person next to you might smack your knee because they’re just laughing that hard.”

This fun and interactive sketch comedy show gives marginalized artists the chance to fully express themselves; their most recent show was a queer takeover led by artists of color from the LGBTQIA+ community.  Each unique cookout is guaranteed to be an unforgettable night for those who attend.

“You’re never going to walk away from ‘Who Made the Potato Salad’ and be like, ‘Oh my god, I fell asleep.’ You never will,” said Mayo. “Because for me, every time my show goes up, to me, it’s at the Garden, it’s at the Staples Center.”  This is the level of excellence that Mayo expects and where she sets the bar for every one of her projects.

Ironically, Mayo didn’t set out to be a comedian. The Los Angeles native wanted to be a theatre actress. She still remembers the first time she accidentally realized she had the natural instinct to command a crowd’s attention and make others laugh.

She was playing the second evil step sister in the Lula Washington Dance Theatre’s rendition of “Cinderella” when one of the dancer’s wigs fell off on stage. The crowd began to yell for the dancer to put her wig back on, but young Mayo was not about to let this accident ruin the performance.

“…I instinctually walked on the stage[…]and I took off my wig and I was like, ‘Better not none of ya’ll be yelling at my sister!’ And I yelled at the crowd and people were laughing and I was just like, ‘Oh my god, what did I do?’” said Mayo. “And I was just like, I want to do that. Like, people reacted. Like, I made people laugh. That felt good.”

This realization pushed Mayo to pursue acting, but time and time again, she found that her biracial identity as a half Black, half Mexican woman was not something Hollywood was able to wrap its mind around.

“I was very discouraged because it was like, you are not Hispanic enough for these Hispanic roles. You’re not black enough for these Black roles. We don’t know where the f— to put you,” said Mayo. “So I always knew that I am Black and Mexican. I always knew that I have these two rich cultures that I possess, and I love and cherish so dearly, but it wasn’t until [recently] that everybody else, including Hollywood, was like, ‘Oh, that’s a [thing]? You can be [multiple]? Wow, okay.’”

Eventually, Mayo quit acting, but she did not give up on working in the film and television industry.

Mayo went onto film school and learned how to work behind the scenes. She learned how to use a camera, how to edit, how to set up a shot, and more. All skills she now claims are the reason she’s such a great producer. And why she refuses to settle for anything less than best.

It was not until she moved from Los Angeles to New York City for a job as a makeup artist that Mayo decided to give performing another try. She had gone to see “Motown the Musical” where she heard the director say, “You have a responsibility to live your dreams. You have to do it now.”

And that sentiment has stuck with Mayo through the rest of her career. She decided to get back into theatre, but found herself constantly turning her auditions into comedy scenes.

A friend later recommended that she check out a local comedy theatre in New York.  After a quick online search, Mayo found herself at Upright Citizen’s Brigade (UCB) and officially on the New York City comedy scene.

But Mayo noticed that comedians from marginalized communities were not getting the same opportunities as their white peers. So once again, she took matters into her own hands and created “Who Made the Potato Salad.” A show that put her on the map throughout the city and named her one of “Ten Women Who Are Making New York A Better Place” in Time Out Magazine.

After a successful first year of the show, Mayo was about to move back to the West Coast when she got the chance to interview for Comedy Central’s “The Daily Show with Trevor Noah.” She thought she had bombed the interview, but instead was offered a writing position only a few days later.

“It was all God. I never thought a show like [“The Daily Show”]  would care about what I had to say or thought I was funny. Literally, when they found me I was doing Potato Salad, I was focused on my own work,” said Mayo.

Mayo’s success was not the result of chance. It is proof of how much heart and soul she has put into all that she does. Instead of waiting around for someone to notice her and give her a seat at the table, she’s building her own and then teaching those around her how to do the same.

“I feel like it ain’t no fun if the homies can’t have none and I want everybody eating,” said Mayo.

“And I don’t even want you to want a seat at the table, I want you to make your own damn table. That, to me, is more important than anything I do, than working at “The Daily Show,” than being Emmy-nominated, than whatever else I do in my career.”

And she is putting that into action even during quarantine. Mayo and her team have reinvented “Who Made the Potato Salad” and are turning it into a virtual cookout comedy showcase.

Instead of the usual party, this new version—premiering on October 24th— will highlight eight different performers in a character showcase, and give up-and-coming comedians the chance to perform in front of industry professionals.

Mayo is also dedicating her time to creating a virtual safe space for the Black community via Instagram called “Collective Intention,” which will allow pre-selected individuals to publicly pledge how they will help to aid in the healing of the Black community. This online space will serve as the catalyst for Mayo’s #MentalHealthMondays Instagram series, where she plans to highlight lesser known activists and leaders

She hopes that ”Collective Intention” will serve as a reminder that although the momentum around “Black Lives Matter” has died down on social media, the work never stops.

Mayo’s community work is a testament to her strive for excellence. She wants to leave a legacy of greatness. A legacy of someone who helped her community and lifted others up as she made her way to the top.