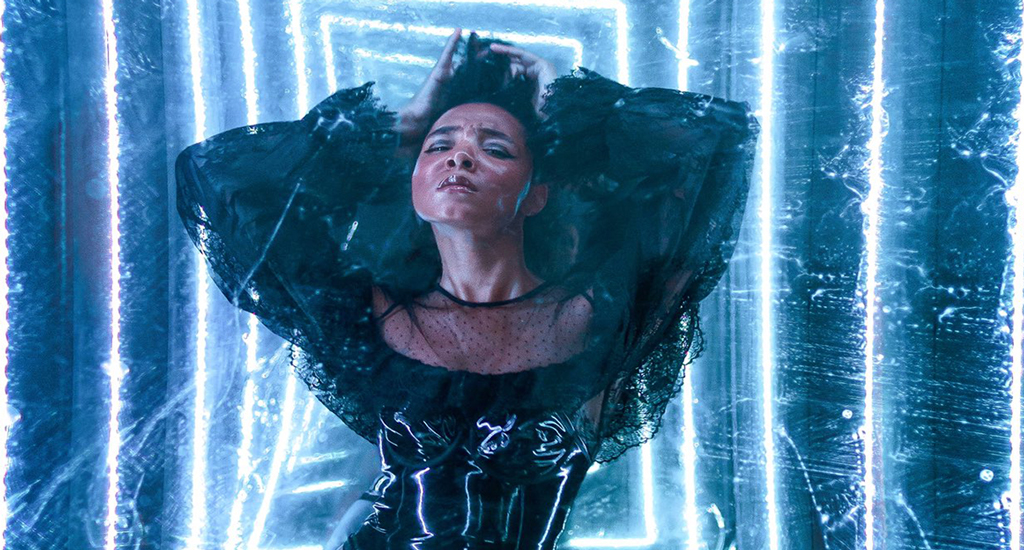 Kimberly Douglas has always wanted to be a model, but when she realized she didn’t have the financial means to build up a modeling portfolio, she took matters into her own hands. The 23-year-old model, photographer, and creative director began photographing herself in elaborate, do-it-yourself sets in her parents’ guest bedroom. But what sets Douglas apart is the honest, behind-the-scenes access she gives her followers. The Southern California model utilizes social media to show her followers how they can create beautiful photo sets of their own. Today, her Instagram handle, @kihmberlie, boasts at least 180,000 followers, and she’s even landed a few brand deals. We spoke to Douglas about what led her to start designing her own photo shoots and why she hopes to inspire Black women everywhere.

What was the big moment that led you to start this Do-It-Yourself journey?

I was still submitting to agencies after I graduated [from] college, and I couldn’t afford to pay a photographer to take photos of me. There weren’t really any photographers that wanted to collaborate with me at the time, and so I remembered, “Oh, I used to take my own [photos]. Maybe I can just do that and get modeling experience that way, and I can just make my own portfolio.” That’s basically how I got started, and ever since, I’ve just been in the guest room taking my own photos.

How have people reacted when they see your photos online?

I do get tagged and messaged about, like, “Oh, I recreated this photo of yours,” or stuff like that, and I always think it’s cool. It’s cool seeing something that you created be recreated by somebody else because you inspired that person, and that’s always been the goal of mine, is to inspire people.

Why did you decide to showcase the behind-the-scenes process?

I’m not rich, so I just use what I have, and when I do have money, then I do buy stuff. But when I first started, I just walked around my house until I could find props, and so I would just use stuff around my house. I thought it was cool, and people could also do it themselves if they wanted to and realize that you don’t always need a whole bunch of stuff to create a cool photo. Some of my favorite photos have come out of ones that I spent nothing on.

What has been your most memorable shoot?

My most memorable shoot now is one that I did recently. I did a shoot where I just [took] a whole bunch of flowers, I laid them on the ground, and I thumbtacked my camera to the ceiling. I made my little bralette and bikini bottom thing, glued a bunch of flowers to it, and posed in just a pile of flowers, and it looks like I’m only in flowers. It’s funny because everything else around my room was a mess that day. But that one was just memorable because I really love how it came out.

Did you ever consider the hurdles that were in your way as a Black creative?

I knew there [were] hurdles in my way because of being Black. I do have some type of advantage since I’m not a dark-skinned model, and I know dark-skinned models go through way more than people of lighter skin tones. But it was definitely one thing that I was thinking [about] when I was going into the modeling industry. I knew it wasn’t going to be as easy. Well, going into the modeling industry isn’t easy in any sense, but it’s harder for women of color.

What does it mean to you to create your own table instead of trying to find a seat at one?

I think making your own way is a good thing. It’s one of the best things because there’s no one path to whatever you want to do in life, whatever it is. If you want to be in the entertainment industry, modeling industry, or fashion industry in general, [there are] always multiple paths, and everybody has their own journey. Sometimes you do have to think outside of the box. So there are a lot of different hurdles to overcome, but I think making your own way is great as long as you stick to it. You have to be consistent, and you have to have faith in yourself. If you believe in God, I believe in God, so have faith in God and know that everything’s going to be okay. Because it’s going to take people years to get to where they want to be. You have to just keep the faith, keep going, don’t give up, and don’t let outside opinions dictate how you view yourself or your journey.

Do you think things in photography/modeling have improved for people of color at all? Why or why not?

You see more Black people in movies, in fashion, but it can definitely be way better. I mean, when you go through model boards on agencies’ websites, you see more Black models than we would a few years ago, but [there] can always be more. Diversity can always be improved upon because it’s still a problem. The only good thing about today is that when it’s seen, you can speak out about it on social media and tell people your experience and other people can relate. So it has diversified, but it can always, it can just be so much better. I want my kid, whenever I have a kid, to grow up and be like, “Oh my gosh. Mommy, isn’t she so pretty?” Because when I was younger, I did not think I was pretty.

What’s the main message that you want to send through your work on Instagram?

I just want to inspire people to go after their dreams. That’s a big thing for me. I want to inspire, especially young Black girls and Black women. I want to inspire my community to just go after their dreams and not let anything hold them back and not think that, just because it’s not the conventional way, that it’s not the right way. There’s no right or wrong way to get somewhere, well, as long as you’re doing everything ethically and morally. There are different ways. Everybody has their own journey, and I want people to go after their dreams and not be scared, because if you are, then years later, you’ll think back and be like, “Now, I wonder what would have happened if I’d stuck to it or if I kept going.” That was always a thing for me.

Is there a bigger goal that you’re still working towards? What is it?

The bigger goal is definitely to get into the industry, like out in the world, and when I do, I want to be able to creative direct and model on the cover of Vogue. That’s a huge dream of mine that I couldn’t even imagine coming true, but it would be amazing if it did. But definitely to just be in the industry. I’m not trying to stay in the guest room forever.

Do you have any advice for young creatives?

My advice to young creatives would be to never give up. It sounds really cliche, and everybody says it, but it’s the best advice I can give, because it’s so hard to just want to give up and just be like, “I’ll just go to plan B,” or, “I’ll just go to my backup plan or just do something easier.” So definitely to never give up, and have faith, and believe in yourself, because that’ll take you farther than you could imagine.