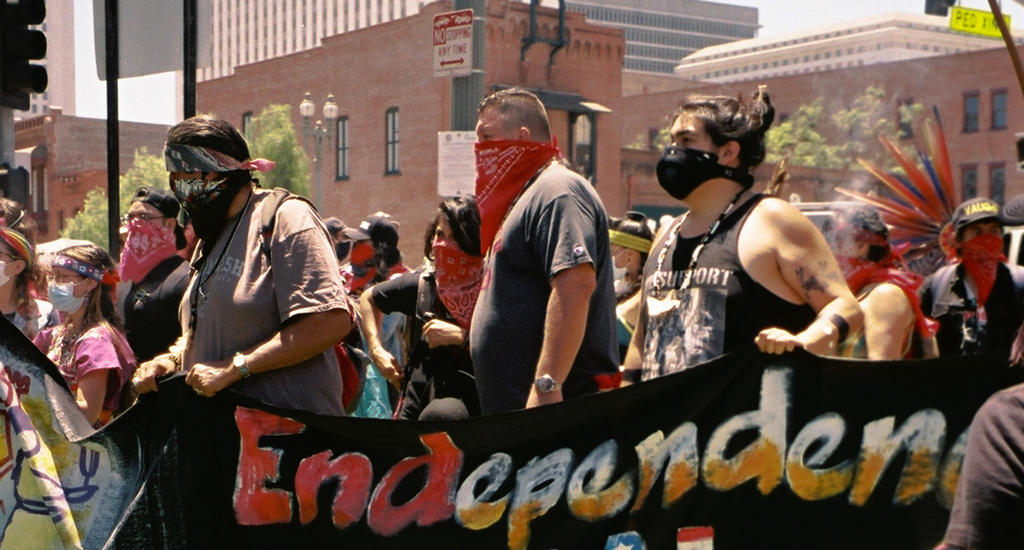 While other Angelenos gathered on the Fourth of July to celebrate a fabricated version of independence, another group was in Downtown Los Angeles protesting for the freedoms of those whom America has failed to protect.

The protest began with the sound of beating drums as vibrant, Azteca dancers led the way from Los Angeles’ historic Olvera Street to City Hall. I could smell the sage as it lit up the entire block, cleansing different energies that you could feel from miles away.

Our march took a brief pause in front of the Men’s Central Jail as a speaker stood up and shared a story about her family member that was unjustly behind bars. I became overwhelmed with so many emotions as I heard prisoners knocking, screaming, and banging on the windows above us.  This moment was significant to me because I’ve had family members that have been in that jail before. I’ve also passed by there multiple times before the protests and would hear banging noises coming from inside of the concrete walls. The prisoners do this every time they see someone walk by. In my opinion, it’s unfair for them to be able to see people freely walking around right outside their windows.

Back at the protest, I learned about the different experiences that the media fails to capture online. I appreciate that about protests; they give me a chance to get new information and extreme insight from those directly affected by the issues that we are fighting to abolish.

I am the first generation born in the United States, coming from immigrant parents; I’ve always fought for undocumented citizens’ rights. I want to  abolish ICE and see children reunited with their families.

It’s because of my upbringing and issues, like immigration, that reminds me why we need to stand together and why I chose to attend this march. When we fight for the rights of our Indigenous brothers and sisters, we all win.

Being an ally is about disrupting oppressive spaces by educating others on marginalized people’s realities and histories. It’s taking social action, having strength, and being courageous.

If you want to be a good ally, you have to actively support the struggle, stand up, and transfer the benefits of your privilege to those in need.

As I think back to the protest, I ask myself and those reading this, what steps are you taking to amplify marginalized voices that are too often silenced?