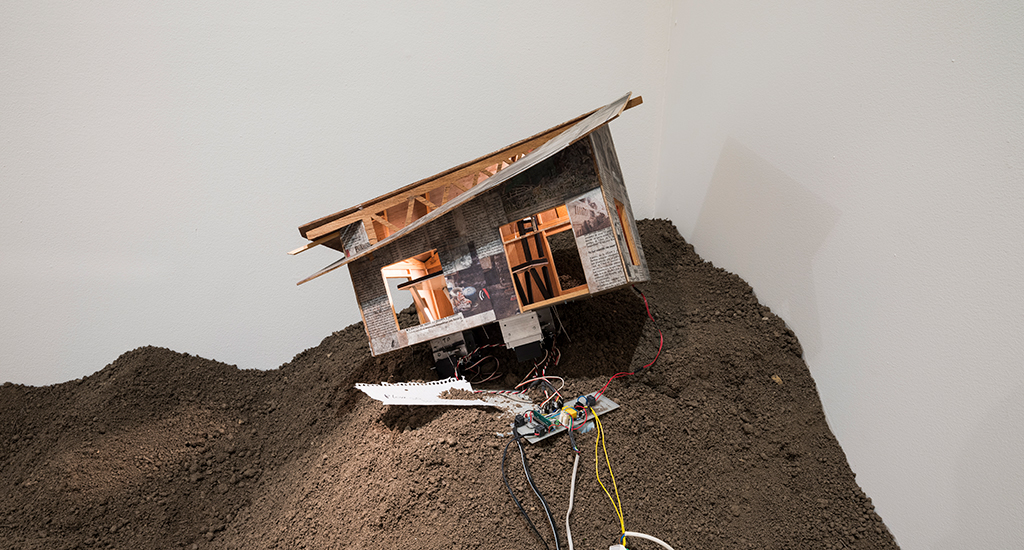 In the middle of MoMA PS1’s ground floor exhibition space, a pit bull-sized robot thrashes and jerks uncontrollably. Exhausted, the creature lays motionless for a few moments, then launches into its next fit of erratic movements seconds later. The motion sensor-activated robot is the work of Fernando Palma Rodríguez, a Mexican artist making his museum debut in the United States with a two-decade survey of robotic sculptures, titled “In Ixtli in Yollotl, We the People.” 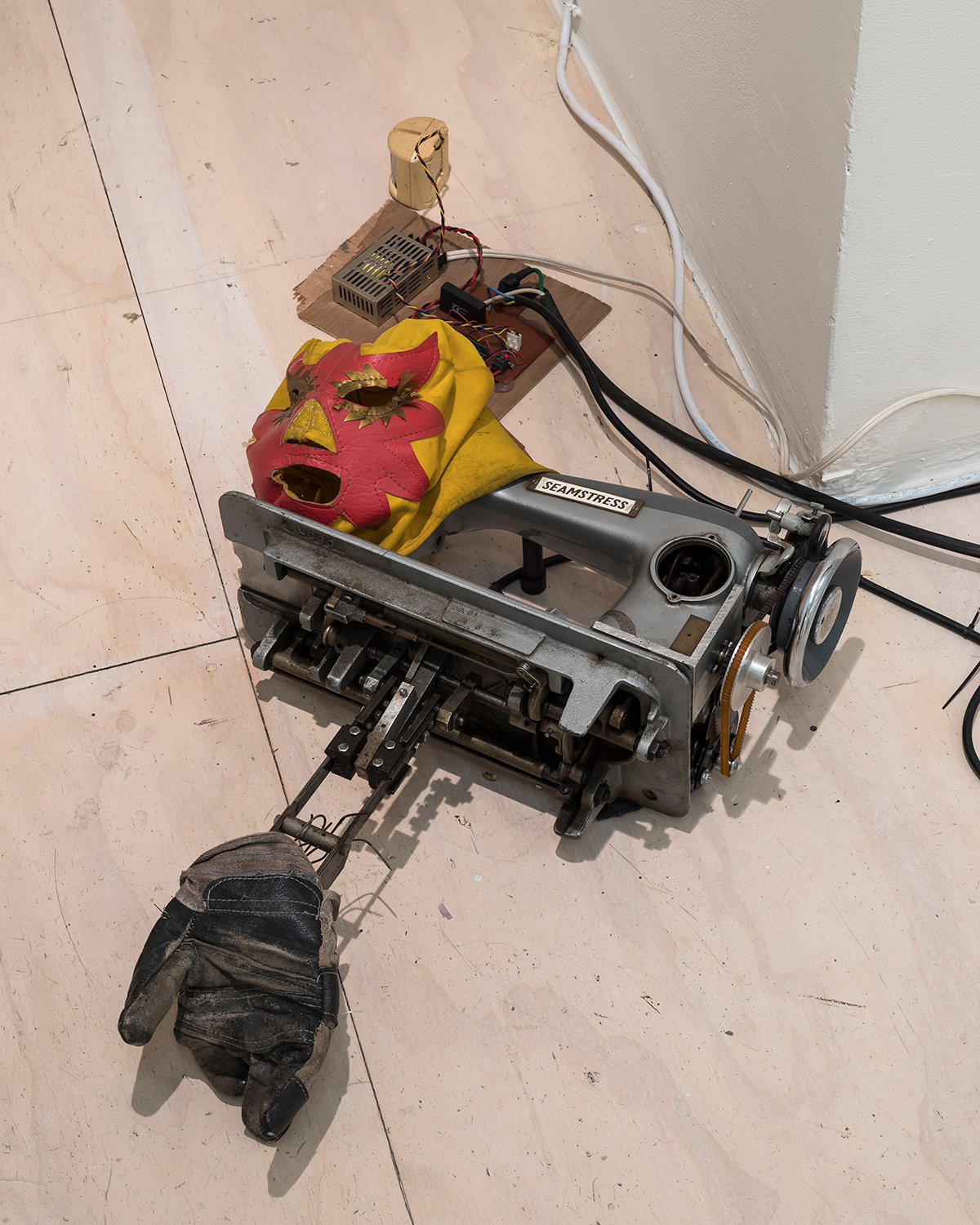 The pit bull cyborg is actually titled “Nanahuatzin” for the Aztec sun god and consists of a sewing machine attached to an outstretched leather glove on one end and the red-and-yellow mask of the Mexican wrestler, El Solar, on the other. Its spasmic outbursts contrast with the stoic hand gestures of the figure that looms above it like a Christ, “Coyote Inalienable,” one of the series of cardboard-headed coyote sculptures found throughout the exhibition.

In “Tlalticpactli,” the only painting in the exhibition, electronic circuits and electroluminescent sheets power the rhythmic, Bruce Nauman-like illumination of delicate chairs suspended on a floating block of earth, a visual poem that is melancholic, meditative, and fretful all at once.

Most of the time, Palma Rodríguez is an activist and an engineer before he is an artist. Beneath his charmingly low-fi renditions of tiny worlds and Aztec deities are the backdrops of colonialism, displacement, and cultural erasure. 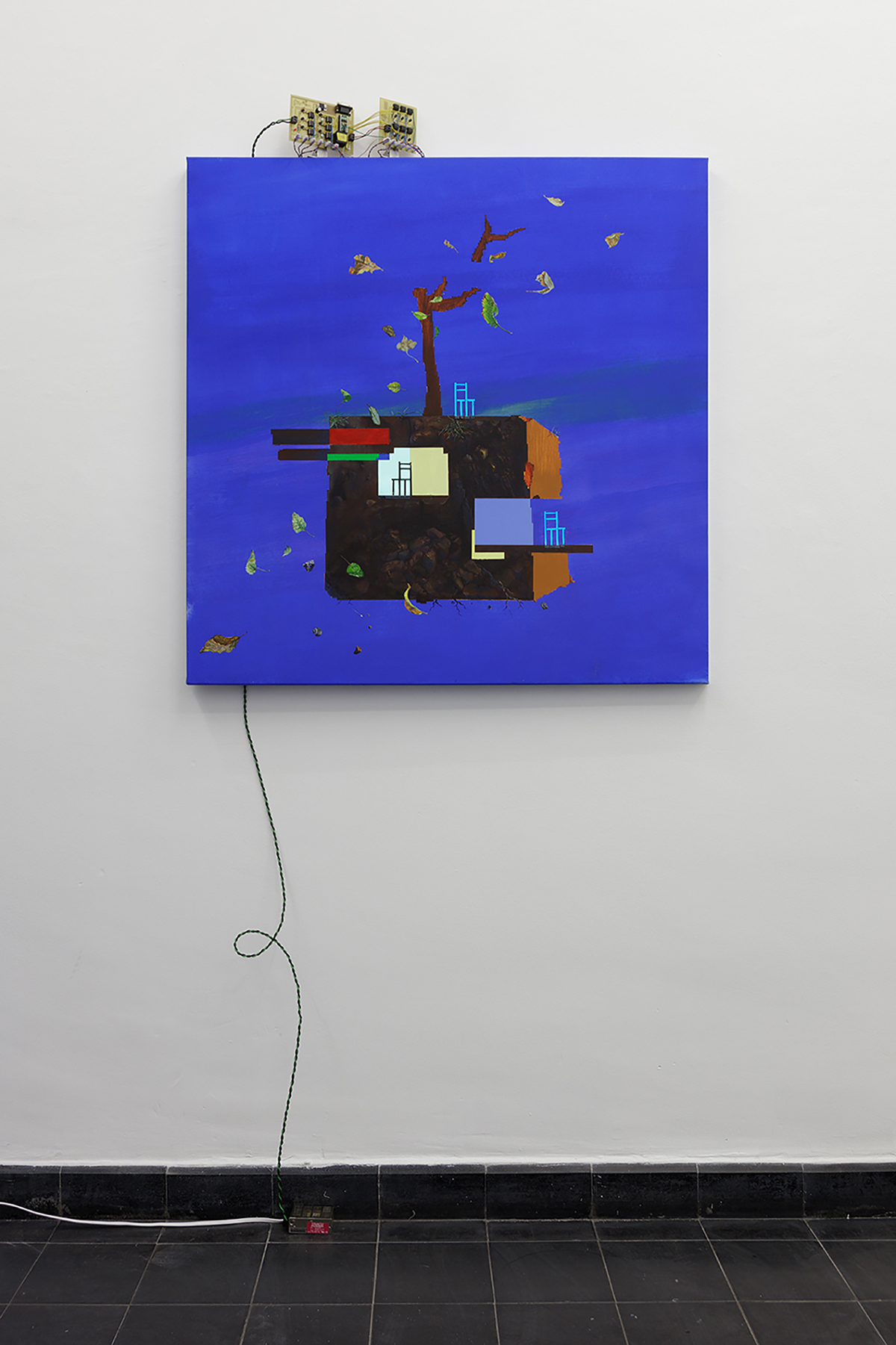 Fernando Palma Rodríguez was born in 1957 in Milpa Alta, a small agricultural community Southeast of Mexico City founded by Aztec families. He grew up speaking Náhuatl, one of the most widely-spoken Uto-Aztecan languages in Mexico, and came of age during the Zapatista movement of the 1980s and 1990s fighting for indigenous rights and land reform.

Rodríguez studied mechanical engineering in Mexico City before moving to London to pursue a Master’s degree in Art History. The artist cites his time at Goldsmith’s University and studying the work of contemporary artists like Jimmie Durham as major factors in reorienting his interest toward Mesoamerican culture and its preservation. “When I first moved to Europe, I was shocked by the amount of waste everywhere,” he said. Most of his sculptures involve discarded materials or “trash,” an inexistent concept in artist’s native tongue. In its place is the Nahua idea of “tlasolale,” which translates to “regeneration,” what Rodríguez describes as “reintegrating materials into life’s endlessly regenerative cycle.” In my favorite part of the exhibition, “Papalutzin,” a yellow butterfly made of a recycled Bulmex can flutters robotically beside its electric blue companion, formerly a Pepsi can. If you look closely, you can make out the logos on both.

“Indigenous communities have very different attitudes towards the environment that could very easily be integrated into Western forms of consumption,” he said. 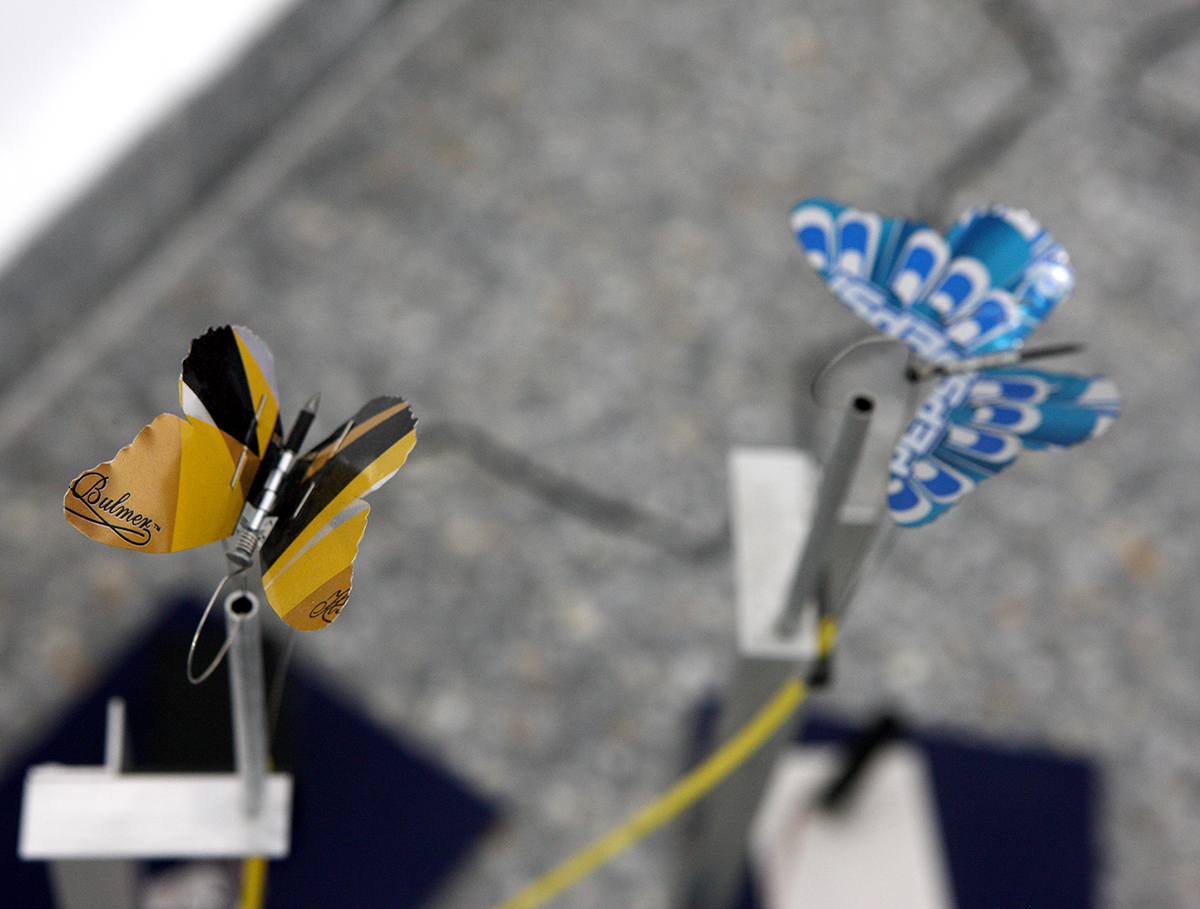 Today Palma Rodríguez lives and works in Milpa Alta, where he runs a non-profit organization dedicated to the preservation of Nahua culture, Calpulli Tecalco. Last year his work was the subject of a retrospective at the Museo de Arte Contemporáneo de Oaxaca.

His work is densely populated by iconography, from pre-Hispanic cosmology and pictorial codices to allusions of post-colonial violence. The “Coyote,” Nahuatl for the ancient god of fire, is a recurring motif throughout the exhibition and one of the artist’s favorite deities. In “Soldado,” the coyote’s metallic blue frame is perpetually lunging forward, ready for battle; “Coyote Inalienable” outstretches its metal limbs and brings them slowly to its heart, lamenting the disarray before him. “In Aztec mythology, the coyote is understood as an agent of exchange between wilderness and civilization,” he said. “By representing him in my art, I hope to invoke the introspection and purity that he represents.” 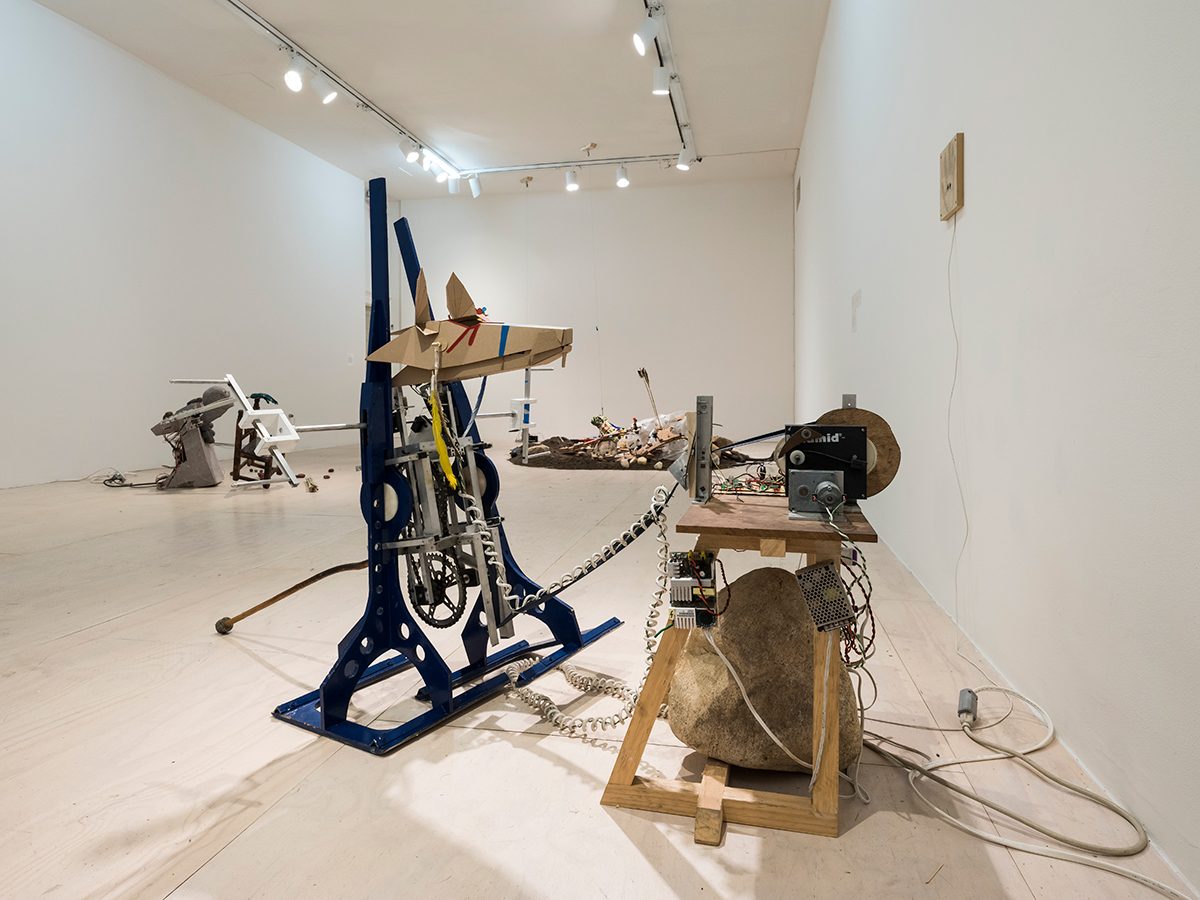 Rodríguez alternates seamlessly between Nahua and Spanish titles. Primitive materials like dirt, seeds, and feathers complement modern apparatuses like dangling wires and exposed circuits. It’s not hard to see him as a modern incarnation of the coyote, who, through his unruly creations, might help us restore a world order where there is a line of exchange between the past and the present.

“Fernando Palma Rodríguez: In Ixtli in Yollotl, We the People” is on view at MoMA PS1 through September 9.