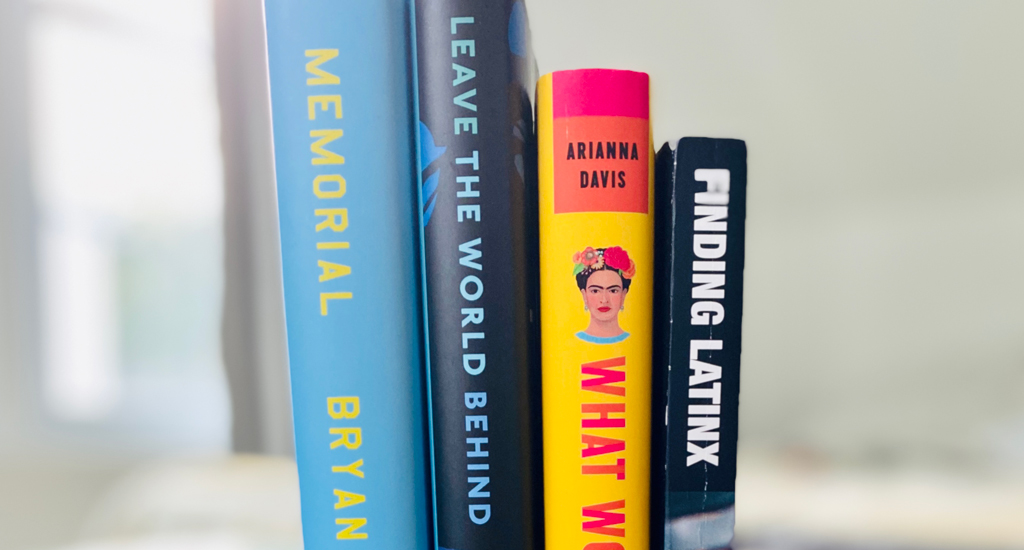 Four Books You Shouldn’t Miss This October with Lupita Aquino

The saying goes, “so many books, so little time,” so why not make that time count? This fall season, curl up with a good book from some of my favorite authors and a variety of genres. Whether you’re looking for a love story, searching for inspiration through the life of an icon, connecting to stories from the vast spectrum of Latinx identities across the nation, or looking for the perfect book that encompasses all the anxieties of 2020, one of the following books is bound to meet your needs.

Memorial: A Novel by Bryan Washington

Have you ever found yourself in a relationship unsure if you are still holding on to the connection because you’re in love or because you’re comfortable with the familiar? Did you feel torn and confused and did it cause you to question the meaning of love? MEMORIAL is a novel that explores that and so much more. When Mike learns that his estranged father is dying, he sets out on a journey to his father’s home in Japan. An adventure he embarks on despite the fact that he has invited his mother, who is coping with the news as well, to briefly stay with him and his boyfriend Benson. Mike leaves his mother and Benson alone in their apartment as he ventures out to reconnect with his father, leaving Benson in a state of confusion as he wonders where their relationship stands. This is a stunning love story that explores how deeply rooted the way we love is connected to the first relationship we observe—the one between our parents. Author Bryan Washington is a Houston native whose first book, LOT, was a finalist for notable awards like, National Book Critics Circle’s John Leonard Prize, the PEN/Robert W. Bingham Prize, the Aspen Words Literary Prize, and the New York Public Library Young Lions Fiction Award. Washington is a National Book Award 5 Under 35 honoree and the winner of both the Dylan Thomas Prize and the Ernest J. Gaines Award for Literary Excellence. MEMORIAL is his first novel.

What Would Frida Do?: A Guide to Living Boldly by Arianna Davis

Frida Kahlo’s legacy has truly expanded over the years. However, these days you are most likely to catch her face, paintings and words quoted all over different types of merchandise and social media memes. But is that really the proper way to honor and keep this legend alive? WHAT WOULD FRIDA DO?: A Guide to Living Boldly, brings Frida Kahlo’s life into our modern age, it keeps her alive by reminding us of what she endured and what inspired her to create the art she left behind. Pulling from her life experiences, this “guide to living boldly” will connect you to Frida, her life and legacy in such a special way. Reading it will fill you with life lessons, such as what to do if you want to take a stand or what to do if you need to find inner strength. By pulling from the ways in which Frida did these things we are given a guide and inspired to show up for ourselves everyday. Arianna Davis is a self-described bookworm turned writer and editor turned author. She is the digital director of O, The Oprah Magazine. Her writing has been featured in New York Magazine, Glamour, MarieClaire, Popsugar Latina and more. What Would Frida Do?: A Guide to Living Boldly is her first book.

Leave the World Behind: A Novel by Rumaan Alam

If someone asked me to name a book that could describe the roller coaster nightmare that has been 2020, it would be LEAVE THE WORLD BEHIND. In this novel, a white family decides to vacation away from the fast-paced life that is New York City. They find the perfect luxurious home to rent in a remote part of Long Island. While everything appears to be a set up for an ideal and relaxing vacation, things take a strange turn when the homeowners they are renting from suddenly appear at the door in the middle of the night. Life takes a strange turn for both families, as we the readers, get thrown into this anxiety driven novel. Blink and you might miss the end, but you will for sure be left asking yourself “what the heck did I just read?”  Rumaan Alam is the author of two previously published novels: Rich and Pretty and That Kind of Mother. Leave the World Behind is his third novel and is a finalist for the 2020 National Book Awards in Fiction. Alam’s writing has appeared in the Wall Street Journal, The New York Times, New York Magazine, Buzzfeed and the New Republic. He lives in New York with his husband and two children.

The term “Latinx” has taken off in mainstream media as a proposed inclusive form to illustrate the vastness of the Latinx experience. However, as many Latino/a’s point out, the term is far from inclusive or perfect. Ramos reports on the terms criticism, while setting off on a nation-wide journey to speak to the voices redefining the Latinx and American identity. The book illustrates the variety of identities that exist within the Latinx community like stories from a Mayan community thriving in Georgia, Afro-Latinxs claiming their identity and the story of how an undocumented drag queen carves a world for themselves. In these stories we are able to see that as a Latinx community, to fully step into our power, we must find a term that identifies who we are. A term that evolves as we continue to evolve. Paola Ramos is a host and correspondent for VICE and VICE News. She has also contributed to media outlets such as Telemundo News, BESE and MSNBC. Previously she was the deputy director of Hispanic media for Hillary Clinton’s 2016 presidential campaign and a political appointee during the Barack Obama administration. She is also the daughter of notable Mexican journalist Jorge Ramos. Ramos is of Mexican and Cuban descent.

Si Dios Quiere: A Story of Duality from the Dominican Republic to Washington Heights

I Am: A Poem by Valerie Roxas