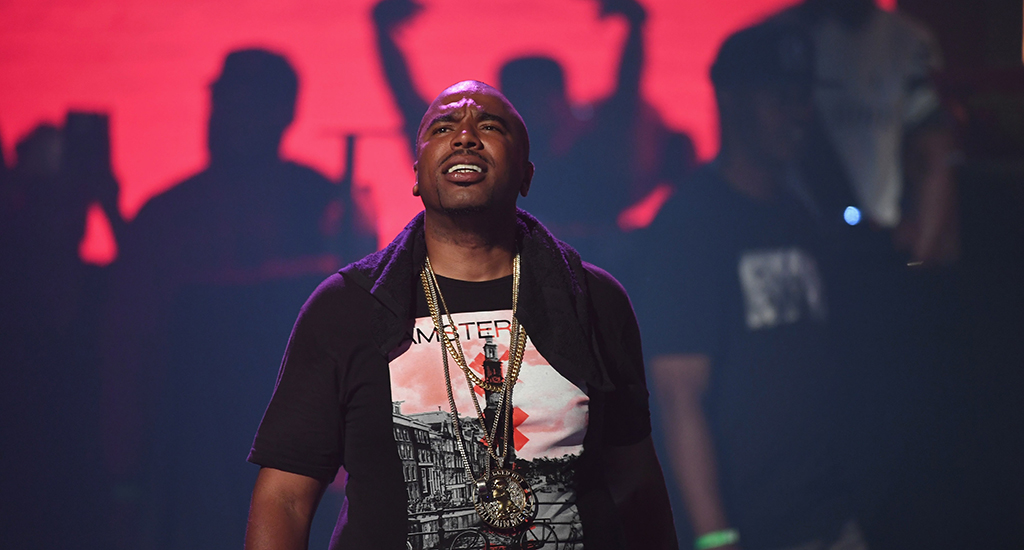 From Noreaga To N.O.R.E.

A few decades removed from the intramural beef known as the Bridge Wars, Queens remains one of the most hallowed places in rap history. Hip-hop legends hail from here, with Run-DMC, 50 Cent, and Nicki Minaj all part of a list so long it almost seems rude like a boast. And while Queensbridge in particular often gets a lot of the shine, thanks in no small part to the contributions of its cultural ambassadors Nas and Havoc of Mobb Deep, other neighborhoods like Corona, Hollis and Jamaica have played vital roles as incubators for hip-hop talent.

About a half hour away from the 59th Street Bridge, that toll-free connector between Manhattan and Queens, LeFrak City may not have the same level of name recognition as the Queensbridge Houses. Yet the twenty apartment buildings that comprise this community produced its fair share of rap heroes, including Juice Crew emcee Kool G Rap and the now-departed Prodigy. Arguably, the most prominent LeFrak representative has to be Victor Santiago Jr., better known as Noreaga.

With a middle school education and a few years incarcerated as a juvenile at Green Haven Correctional Facility under his belt, he was still a teenager when he recorded his first duo album with fellow young ex-con Capone. An underground classic, 1997’s The War Report put the soon-to-be iconic pair on the proverbial map, with plenty of raw bars served atop rugged beats by producers like Buckwild, EZ Elpee, and Marley Marl. Assuredly a byproduct of the first Gulf War’s influence on his generation, Noreaga frequently likens LeFrak on the record to Iraq, a reflection of the lifestyle that earned such a nickname. By the time The War Report came out, Capone found himself back behind bars on a parole violation, leaving his partner in rhyme to contend on his own. Penalty Recordings and Noreaga pressed on together, releasing his first solo set N.O.R.E. roughly a year later at the age of 20.

A breakthrough year for Latinx artists in hip-hop, 1998 had already seen a Puerto Rican rapper from New York blow up before the July release of N.O.R.E. Dropping the same week in April as the Noreaga album’s titular lead single, Big Pun’s Capital Punishment went RIAA gold within a month, subsequently fulfilling the Bronx native’s Latins Going Platinum prophecy espoused on “You Came Up” by mid-July. (Notably, Noreaga featured on that particular track.) Later that summer, Pun’s fellow Terror Squad member Fat Joe would put out his own Don Cartagena, his third full-length and first to reach gold status.

While The War Report sounded very much in line with the hardcore boom bap of Capital Punishment, the N.O.R.E. LP sported ambitions beyond feeding the streets. This was hip-hop’s so-called “shiny suit era,” a snarky dig at Puff Daddy’s Bad Boy image that doubled as a means to describe a relatively commercial though still authentic rap sound. Not unlike Nas, who followed the brutalist street soul of Illmatic with the more mainstream affair It Was Written, Noreaga took his opportunity to follow up The War Report by diverging from its aesthetic and leaning presciently into a style that would soon become the new wave.

Scarcely any of those who’d participated in The War Report returned for N.O.R.E., largely replaced by a set of beatmakers of varying experience at that stage. While EZ Elpee and Marley Marl took a track apiece, the remainder of the album teamed him with the likes of Dame Grease and Swizz Beatz. The Trackmasters had given Nas some bonafide hits with “If I Ruled The World” and “Street Dreams,” not to mention Will Smith’s “Men In Black” theme, so it made sense for Noreaga to work with them. The result of all this was a bridging of generations of urban music that sounded not just current but slightly ahead of its time.

An encapsulation of Noreaga’s near-futurism, “Superthug” launched two careers into hip-hop’s heights. At the time, The Neptunes were on the verge of landing one properly-credited hit to their name with Mase’s “Lookin’ At Me.” The Bad Boy rapper’s Harlem World emerged late in 1997, but the Puffy-featuring track didn’t get the the single treatment until the following summer, right around when N.O.R.E. landed. Something about the wiry, grimy song connected with listeners, and the outlandish music video furthered Noreaga’s LeFrak-Iraq analogy. A major hit for the Queens kid, “Superthug” captured a fresh sound unlike anything else at the time. It peaked at No. 36 on the Billboard Hot 100 and No. 15 on Hot R&B/Hip-Hop Songs. Before long, The Neptunes were in high demand.

As with the production, N.O.R.E. flaunts a veritable who’s-who of established names and emerging rap stars. On Swizz Beatz’s “Banned From TV,” Noreaga joins his contemporaries in the game Big Pun, Cam’ron, The LOX, and Nature for a bombastic posse cut set to the tune of “Thus Spoke Zarathustra.” He reaches out to his neighbor Kool G Rap for “40 Island” and taps ‘80s Motown vet Chico DeBarge for the shimmering crossover “The Way We Live.” Yet most of the credit deservedly goes to Noreaga himself, his cleverness and dexterity on the mic suited to wilding out as well as to cruising.

Noreaga’s commercial gambit paid off quickly. In line with the Terror Squad’s aforementioned sales wins, N.O.R.E. earned Noreaga his first ever gold certification from the RIAA roughly two months after its release. All three records demonstrated that there was a place at the table for Latinx rappers in the predominantly African-American hip-hop scene—not just in the audience but on the stage. The simultaneous successes of these albums reflected a reality long obscured in the national conversation around rap music, namely that Latinx people both were and are an integral part of the communities where the genre came from and thrived within.