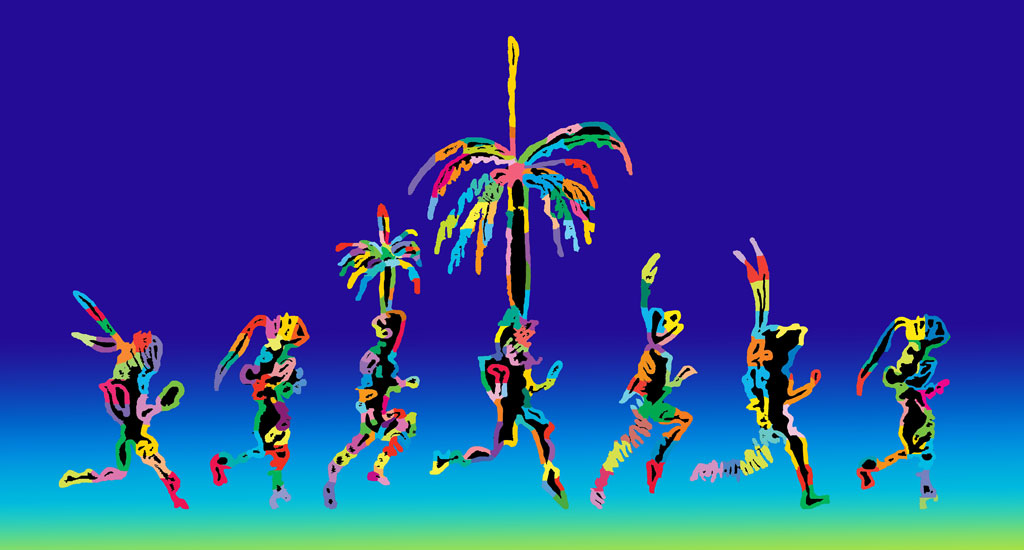 German Perez’s playful amalgamation of primary colors has a way of screaming for your attention, and once it draws you in, there’s no escaping the lessons masked in illustrative wonder. It isn’t a mistake nor a one-time experience, it’s exactly what Perez intends to happen when you engage with his art.

The Dominican artist has managed to weave in his country of origin’s complicated and intricate history in a way that invites the audience to take a step closer and analyze each detail. His collections tell stories of indigenous Caribbean cultures, the fight for women’s rights, the colonization of the Caribbean islands, and the hardships of migration from the Dominican Republic to the United States.

“I wanted people to swallow the art, not reject it. [I didn’t want them to think] ‘Oh my God, this [art] is too dark.’ No, no, come and look, and you’re going to learn something. You’re going to feel something,” Perez said. “I discovered very early that if you make the art more disguised, less in front of the people, it’s more effective because you don’t reject the public. You’re attracting them, and letting them get in touch.”

Born and raised in the Dominican Republic, Perez is a visual artist who has lived in New York City since the 1980s. His influence in the world of art has put him alongside notable icons like Andy Warhol and Jean-Michel Basquiat, and made him one of the leading artists in the Dominican’s 1980s art scene—as described on his personal website. Some of his artwork has even graced the covers of notable novels and poetry books by renowned authors Julia Alvarez, Kathy Engel, and Sergio Troncoso.

Perez has not only represented his country around the world with exhibits in France, Norway, Spain, Panama, Brazil, Hungary, and many others, he also invented Caribbean pop — a style that blends rural Taino culture—the Caribbean’s indigenous community—and varied aesthetics of early 90s New York graffiti and pop art.

“I was very immersed in the Taino language and the illustration of the mythology from them,” he said. “I believe it was very important because that was their belief and how life was created and everything. It was very proactive, so I took that as a mission like I had to illustrate this.”

The New York-based artist was always proud of his Dominican roots and heritage, and later in life educated himself on the Taino language and Afro-Caribbean folklore. He took it upon himself to bring these stories to life through his illustrations. Perez dove into research on his Indigenous ancestors and felt it was his responsibility as an artist to talk about them and educate those around him.

“I study anthropology. I want to go back to the bones of the Dominican roots, and then evolve from there because I don’t just stay with the Tainos,” said Perez.

His work not only focuses on his ancestral roots but also on the values that he credits his mother and grandmother for instilling into his character at a young age. One of Perez’s notable pieces — featured at an art installation at the United Nations’ first International Day of Violence Against Women in 1999 — shows a tribute to three brave Dominican women who stood against the Trujillo regime — a cruel, three-decade period when dictator Rafael Trujillo ruled in the Dominican Republic. The three women were the Mirabal Sisters, who were known for their consistent fight against the regime. A fight that ultimately led to their death and the overthrowing of Trujillo’s rule on the island. In 2016, he also made headlines for celebrating Hillary Clinton’s presidential campaign, illustrating a portrait that she proudly hung in her 2016 Brooklyn headquarters.

Apart from his work on calling attention to the plight of women, Perez has also created art seen through pop culture history. His illustration for the 13th Annual Latin Grammy Awards features the memorable Grammy trophy in post-graffiti style — a blend of stencil art and traditional graffiti. This style was adapted by Perez from the origins of brush strokes used in Chinese writing. Perez’s Grammy art piece wasn’t a single analog piece, it was partially accomplished on photoshop. He first drew the Grammy logo, scanned the image in black and white, and manipulated the image colors in different ways.

“I do [a] combination. It’s an analog drawing with a colored computer. It doesn’t lose the soul. If you do everything [on] the computer, in some way, you lose the soul,” he said. “So, I try to do the scanning part that is analog. That is, you can catch my emotion, and I do it with all things. There is not one work [of mine] that is only digital.”’

Photoshop isn’t new to Perez, he’s used the program since it was first created, and before that, he’d superimpose images by hand. He used that technique in his “Mujeres 1981” collection, one of his early exhibitions that was featured at the National Library.

Perez has always been ahead of his time and his work is constantly evolving. He is currently working on animations of his collection, “Mesopotamia in the Caribbean 2018,” — a tribute to one of the first civilizations. To Perez, this moment in history was the beginning of art as a profession. He also laced the ancient tribute with history of the Caribbean, a reminder of his roots that is present in everything he does.

“Taking it to the Caribbean is like going back to my roots, basically. I don’t want to leave that alone because that’s me. That’s my signature. So, [I bring] everything to that taste, to the Caribbean taste.”

As an artist, Perez cannot be put into a box. Along with visual art, he has also worked as a documentary director and as a musician. He has co-produced albums for Dominican folk artist Boni Raposo, released his own album under the band name, “Lemba y Los Carapintadas,” and performed at the Baryshnikov Art Center in New York. His music, like his art, speaks to justice and the numerous issues that exist for Caribbean people and those of its diaspora.

“I like to travel to the Dominican history through my work. You can see it. You can see it even in the music, I try to recreate the different rhythms that [have] been created, not in the Dominican Republic, in the Caribbean,” he said. His music and his art are one cohesive body of work because if Perez can’t draw you into his work with visual art, he’s going to do it with sound.

“[My music is] it’s like a hook. They see the music, and they see the visual art too,” said Perez. To the great artist, “art is manipulation” and “art is medicine for the soul.”

Perez’s art is timeless and teaches not only Caribbean history and folklore but of the world around us. His art pushes the audience to look at the story that’s hidden in plain sight. He hopes future generations will recognize his art as something that was made by someone who fulfilled his dreams.

“[I want people to say] that guy was alive,” he said referring to himself. “He was awake in everything that was happening on this planet. That’s the memory I want people to have about me. That I didn’t limit myself for any precondition that life would be, that I live plenty of my dreams, of my ideas, of my vision of the world without prejudice.”