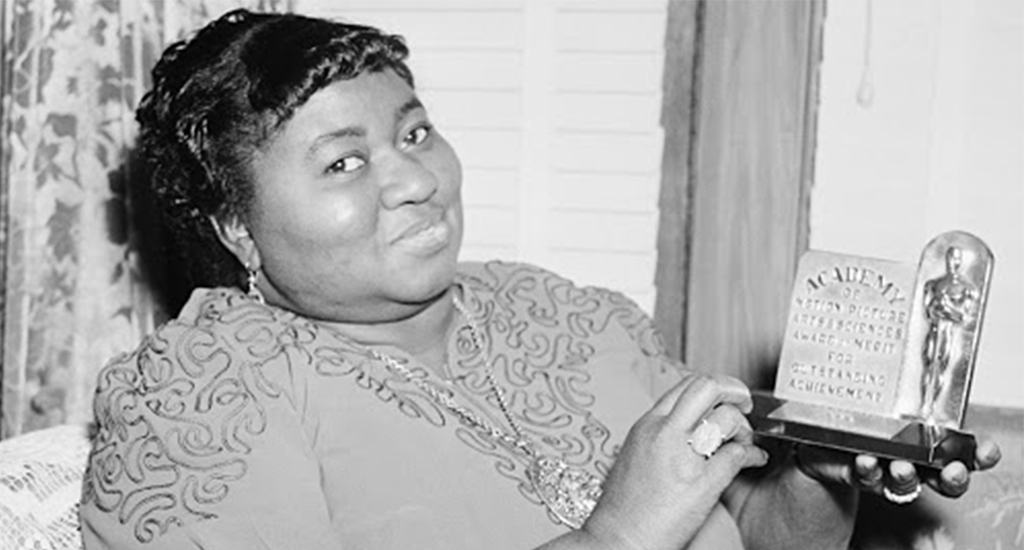 This Black History Month, we honor Hattie McDaniel, the first African-American to win an Oscar for her supporting role as “Mammy” in the 1939 film, Gone With The Wind.

McDaniel was born in Oklahoma in 1893 to former slaves and was the youngest of 13 children. The young entertainer had a natural talent for singing and performing, a skill that earned her much popularity during her school years. In fact, she even dropped out of high school to pursue a career in entertainment.

That career began in 1911, with the assembly of her own all-women minstrel show. From there, she toured with vaudeville groups across the country and became a regular vocalist at a Milwaukee inn. Finally, in 1930, she moved to Los Angeles and kicked her career into high gear. Shortly after arriving in the City of Angels, she appeared on The Optimistic Do-Nuts,—a radio program where her brother was a regular. Despite her small role, she became an instant hit with listeners and was playfully dubbed “Hi-Hat Hattie.”

McDaniel continued to work in small roles on screen and on the airwaves for the next few years, but with the scarcity of roles for Black actors, she was forced to pick up odd jobs to make ends meet. In 1935, she landed the role of “Mom Beck,” a housekeeper in The Little Colonel, a film that featured the first interracial dance pairing between Shirley Temple and Bill “Bojangles” Robinson. This role served as a stepping stone for greater opportunities and soon after, she caught the attention of film producer and studio executive, David O. Selznick. Selznick had just bought the rights to Gone With The Wind and he cast McDaniel in it. It was here that she played the most significant role of her life—the slave character of “Mammy”—a long-standing archetype derived from slavery that usually cast overweight, dark-skinned Black women as caregivers who worked in white families and raised their children. While the caricature was problematic, it brought McDaniel much success—but that success was not without strife. She was not allowed to attend the premiere of the film at the Loews Theater in Atlanta because of segregation laws, and she faced much criticism from her own community, including the National Association for the Advancement of Colored People (NAACP) who criticized her for often playing servile and stereotypical roles. But McDaniel persisted, and in her famous rebuttal she said, “I’d rather make $700 a week playing a maid, than $7 working as one.”

In 1940, she made history after winning an Oscar for her supporting role in Gone With The Wind. But she was not allowed to sit with her castmates, and Selznick had to pull some strings for her to be allowed to even attend the ceremony in the first place. While she continued to work after the success of Gone With The Wind, the film offers were few and far between, so in 1947, McDaniel strategically pivoted back to radio. Around the same time, she suffered an unexpected heart attack and was diagnosed with cancer. She was, unfortunately, forced to stop working and pursue treatment. McDaniel died in 1952, after losing her battle to cancer. By the end of her career, the artist had appeared in more than 300 films but received screen credits for only 80. In 1960, she was awarded two stars on the Hollywood Walk of Fame—one for her contributions to radio and one for her contributions to film.

McDaniel’s work continued to be recognized past her death. In 1975, she was inducted into the Black Filmmakers Hall of Fame and was honored with a commemorative U.S. postage stamp in 2006. And in 2010, actress Mo’nique honored McDaniel by wearing a blue dress and white gardenias in her hair—a look reminiscent of McDaniel’s 1940 Oscar’s look. Mo’Nique took home the award for best supporting actress that night—for her role in Precious—and in her acceptance speech, the actress thanked McDaniel for paving the way. But she is just one of many Black actors who have been able to find success because of Hattie McDaniel. Without her, the recognition of the Black community in Hollywood that has now been realized—but has yet to reach equality—may have been even more delayed. Her talent, endurance, and passion for performing opened the door for many. May we always remember her as we strive for more diverse and equal opportunities.