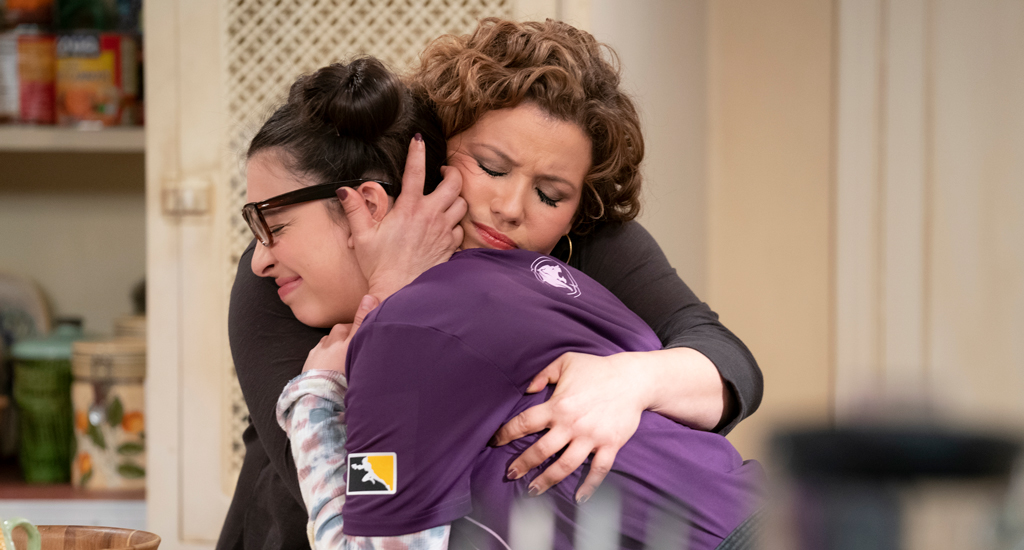 One Day at a Time (ODAAT), which is now airing its fourth season on Pop TV, is helping provide a visible television outlet for Latinx fans seeking acceptance for stigmas often seen in the Latinx community, including conversations surrounding mental health, LGBTQ+ issues and more.

Through its open dialogue, the show is helping change the on-screen narrative of what it means to be Latinx in today’s America.

A week and a half before production was halted due to coronavirus concerns, BESE spoke with Justina Machado, who stars as ODAAT’s Penelope Alvarez, about receiving messages from her Latinx viewers, as well as the empowerment of working with a Latinx showrunner for the first time, and how Penelope will continue to evolve in season 4.

When Norman Lear’s 1975 sitcom series was rebooted with a Cuban-American family and multiple LGBTQ+ characters, some viewers took to Machado’s DMs to express how the show helped them either to come out to their family, heal from a less-than-accepting coming out moment, or talk about mental health more openly.

“I read them all and it’s like there’s three major things—either they say, ‘Oh my God, I wish my mom was like this—you know I had a hard time coming out and I wish my mom was as understanding’, or ‘You helped me come out’—and then there’s the depression and the anxiety that she [Penelope] goes through. And I really get a lot of response from that. People say, ‘Finally. This is what I’m going through, now people understand.’ Because you know, not every Latino family because we’re not monolithic, but a lot of it is like, ‘Ah get over it. Ah tú está bien. You’re gonna be fine. Why you gotta do that for? It’s not needed.’ They want you to power through—it’s all about being strong and powering through. So when somebody [a viewer] got to see that and said, ‘Now my sister knows what I feel like, or my friend, or my mom, and they see what it’s like, this is me,’” Machado said about fans, including Latinx fans, who reached out to her to discuss how the show’s portrayal of multiple issues impacted their lives.

Episodes showing how to properly use pronouns and introducing heartwarming moments with non-binary characters such as Syd (the girlfriend of Latinx teen protagonist Elena) were just some of the top queer moments Pride.com praised ODAAT for as a means of introducing audiences to this type of LGBTQ+ diversity on-screen.

When ODAAT was on the verge of ending its run after Netflix pulled the plug on the show last year, the LGBTQ+ community was part of the effort to help save the show.

Drag Star Diva wrote in a post last year, “Shows like One Day at a Time are important because they give a voice to communities that otherwise may not have one. One Day at a Time was one of the first series to show a non-binary character in everyday settings, as well as a very realistic coming out experience.”

Fans continued to tweet how the show helped them feel accepted when Penelope showed support for her daughter Elena when she came out.

One fan even tweeted how she was able to come out thanks to the show itself.

The fierce loyalty promoted by ODAAT’s audiences worked—Pop TV announced a few weeks after the show’s cancellation last year that it would be picking up the show for its network.

While her background is quite different from Penelope’s in terms of her personal life, Machado said she connects with her character’s fearlessness and love of family.

Machado, who is of Puerto Rican heritage and grew up in Chicago, developed her love of the arts at an early age—whether that was dancing or performing in school plays and at the Latino Chicago Theater Company. She moved to New York after high school, and then to Los Angeles to begin her career as a professional actress. Before landing her role on ODAAT, Machado had acting credits on shows like Six Feet Under, ER, Devious Maids and Queen of the South.

In addition to Penelope, ODAAT’s other main characters have helped TV audiences see the layers of what it’s like to be Latinx in this country, including the increasingly positive portrayal of young Latinx characters as ambitious and educated heroines, as the Los Angeles Times examined with ODAAT’s Elena character.

The authenticity Penelope, Elena and the rest of the cast possess is thanks, in part, to the series’ showrunner and co-creator, Gloria Calderón Kellett.

Calderón Kellett’s personal connection is sprinkled throughout the show, which in turn created an ambience for openness that Machado said she had not experienced before in her acting career.

“I’ve never had something so collaborative in my life. I’ve never in anything that I have ever done have ever had showrunners [be] this collaborative. Being able to relate to Gloria [Calderón Kellett] so much—because Penelope is Gloria and me. There’s a lot of Gloria in this—I mean this is her family. This is the story of her Cuban-American family. The story of Pedro Pan is her parents’ story about Pedro Pan. The two kids in this. There is a lot of her here. She is the Cuban-American here. So combining her reality and my reality is what made this character. But to be able to go to someone and say, ‘Girl, that doesn’t make sense. You know we wouldn’t do that.’ and she’s like, ‘Yeah, you’re right.’ That never happens somewhere else. The specificity. The authenticity. And the fact that we both are on the same page and we want to put that out there. We don’t want to do it for a cheap laugh or the fact that we’re the butt of the joke, or any of these things. We’re telling these stories. It is like nothing I have ever been a part of,” Machado said.

Calderón Kellett continues to stretch the boundaries of her cast and crew—whether that’s simulating an anxiety attack on an episode, or helping Machado secure the chance to call the shots behind the camera as well.

“I’m going to direct an episode this season. So to be able to have that, to have them give me this opportunity, I don’t know if I would have gotten it on another show, even being the star of a show,” Machado said about taking on the director’s chair for the first time.

As for her character on screen, Machado tells her fans Penelope will be finding love this season! Looks like she may not be turning into her Tiá Chuchi after all!

She didn’t give A.F.! She was Tía Chuchi.

Relive one of Abuelita’s finest moments by catching the #ODAAT premiere for FREE on the @PopTV Now app: https://t.co/skzHsgozMc pic.twitter.com/ya8AvEfdNS

“You can expect to see her in love. She has a love right now. And also dealing with these young kids turning into young adults. Alex has a girlfriend this season, so that stuff happens with them. Elena is going off to college this season. And Schenieder has a big thing this season also. So it’s kind of like the show has evolved because that’s what happens in real life, right? Things evolve and so that’s what we can expect,” Machado said.

In these trying times, ODAAT will continue to show its audiences we can all continue to evolve and push through, one day at a time.

Being Undocumented In The Time of Corona