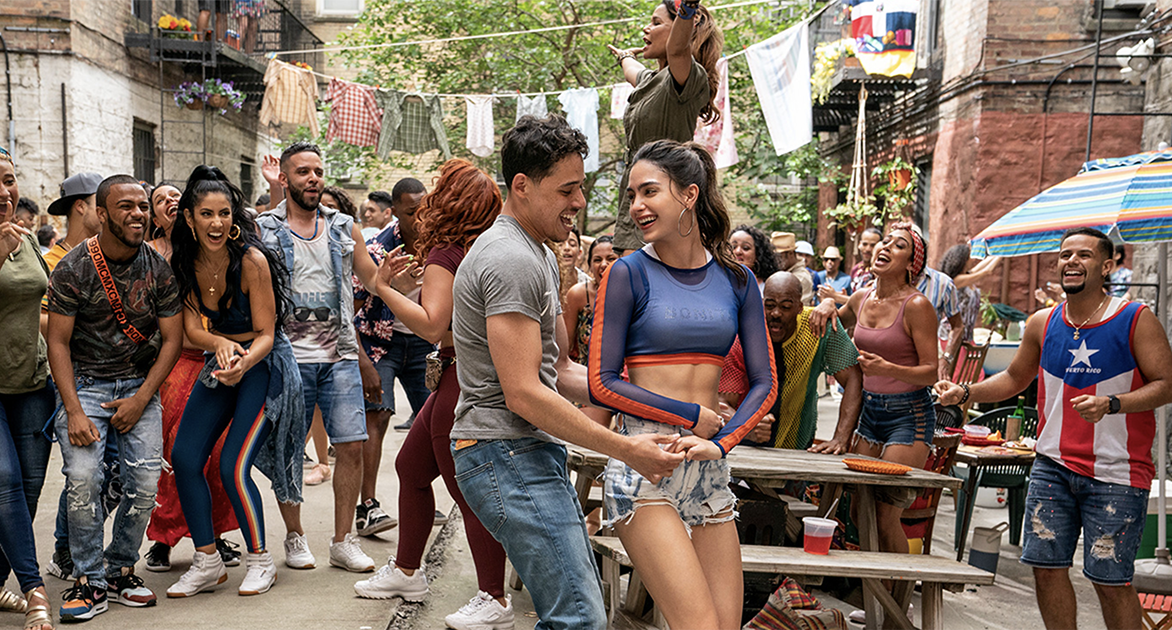 ‘In The Heights’ Review: The Importance of Seeing Your Home Represented on Screen

Washington Heights has always felt like home. As a first-generation Domincan growing up in New York City, I spent most weekends there as a child visiting my grandmother and cousins. My grandmother still has that tiny apartment on 164th and Fort Washington Ave. The Heights was always the go to spot to find all the things from the Dominican Republic, things you couldn’t find in the other boroughs. And it was the only place my mother could find ten plantains for a dollar.

For the first time, I saw this beautiful, culturally rich neighborhood proudly displayed on screen in Lin Manuel Miranda and Jon M Chu’s blockbuster musical, ‘In the Heights.’ I watched with excitement as Miranda, Chu, and the rest of the cast and crew paid homage to this historic Manhattan neighborhood. I saw my community, culture and city represented in a celebratory way, from its vibrant characters to the Dominican snacks featured inside of the film’s primary setting—Usnavi’s bodega.

In the film, three bottles of the popular Dominican soft drink, Country Club, are nestled inside clear shelves atop the many storage containers that line the tiny aisles and corners of Usnavi’s (played by Anthony Ramos) bodega in Washington Heights. As you take a closer look inside the store, viewers will find a painting of the Dominican Republic’s map colored in with the country’s flag on one of the walls of the small business. It serves as an altar for Usnavi as he fantasizes about moving back to his home country.

Like many other residents of the predominantly Dominican neighborhood, Usnavi dreams of a better life in his native land than what the states have offered him. His story is relatable, palpable and excruciatingly familiar.  It’s the story that I heard many of my relatives retell over and over again whenever they spoke of their hopes, dreams, and beloved homeland.

Miranda—a Washington Heights native—debuted this beautiful story off Broadway in 2007 and went on to win a Tony Award for “Best Musical” in 2008. In The Heights is an ode to the multicultural bedrock that houses a slew of Caribbean and Latin American immigrants in New York City. It’s vibrant, beautiful, hopeful, and brash. Director Jon M Chu (Crazy Rich Asians) does an amazing job at giving his audience a gorgeous view of this magical place. There are stunning glimpses of the George Washington Bridge—which connects the neighborhood to New Jersey—sprinkled with the infamous colorful high-rise housing projects on 179 and St. Nicholas Avenue.

When seeing those familiar and beautiful views, I felt an inexplicable sense of pride and elation. It felt like we finally made it and we were reminded that our stories matter. For a long time, Black and Brown people were not awarded visibility inside the insular homogeneous culture that Hollywood fosters. The truth is, the fight still remains and representation matters.

In The Heights was made by people who look like me, for people like us. And it was wonderfully made for communities of color to see themselves in—even if they’ve never been to The Heights. From the music to the clothes and style, you won’t want to miss this cultural explosion of Latinx flavor.

“We’re not leaning on the fact that we need a star to sell it: We know what we got is fly,” Ramos told TIME. “And I want kids of color—whether they’re from India, Puerto Rico, Nigeria, wherever—to watch these kinds of movies and be like, ‘Oh, snap—that’s what’s up.’”

In The Heights highlights the complexities of assimilation while navigating the rough terrains of staying authentic to your culture and upbringing. There’s the story of Nina Rosario (played by Leslie Grace), a first-generation Puerto Rican who’s grappling with dropping out from Stanford University after feeling ostracized and being racially profiled at the predominantly white university. Usnavi’s love interest, Vanessa (played by Melissa Barrera), is a nail technician but dreams of being a fashion designer and living in Downtown Manhattan.

The film also showcases the rapid increase of gentrification and its impact on the community. Daniela, a loud-sassy hairdresser, played by Daphne Rubin-Vega, is forced to vacate her hair salon due to a steep rent increase and move it to Grand Concourse Avenue in The Bronx.

Amid the struggle, In The Heights presents a beautiful, visually sonic masterpiece filled with singing and dancing. At any given point, Usnavi and the rest of the gang break into musical soliloquies that turn into a dance fantasy. I was immediately reminded of my summer days in the neighborhood while I watched the film’s synchronized water performance inside of the Highbridge Park public pool— the same pool that I would frequent as a young boy growing up in the Heights.

What’s most appealing about the film is how unapologetically Latinx and Caribbean it is. Here, there are no subtitles or translations for the parts that are in Spanish or slang. I furiously smiled when I heard Cuca, one of Daniela’s salon workers (played by Dascha Polanco) say “tengo la pampara prendida,” which is a form of saying something is cool or hot. The term “pampara,” which replaces “vaina” was made popular by Dominican dembow singer Kiko el Crazy.

Another standout feature is the acting! It is so incredible that you would think these dance breaks and sing-alongs came from an undercover surveillance camera that somehow captured people singing and dancing naturally with no Hollywood direction at J Hood Fort Tryon Park. The dichotomy between the staged acting, and real life is surreal; the fantasy Chu and Miranda creates is enthralling and swallows you up from beginning to end.

In The Heights is the blueprint Hollywood needs to follow in efforts to really, really authentically tell our stories and give creators of color the agency to do so freely. And it shouldn’t just be Latinx stories; there’s room for all—we need to break those barriers. It’s necessary; this is the first time I’ve ever felt so seen and represented in media without any roadblocks or detours. It was a nice feeling to see the Country Club sodas proudly displayed inside of Usnavi’s bodega. They reminded me of my family’s beloved island and my childhood in The Heights.