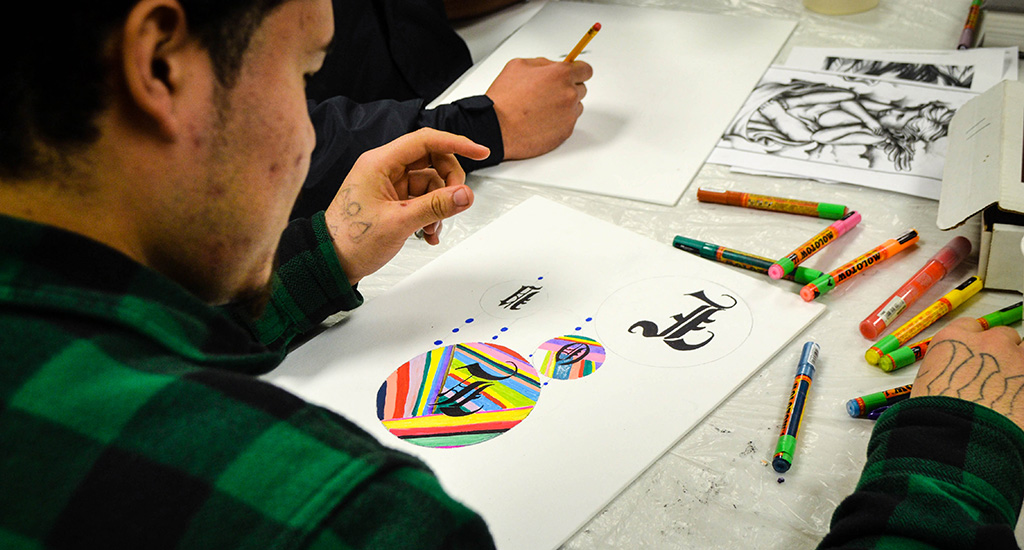 Inside an Oregon Youth Correctional Facility, Art and Hip Hop Are Thriving

All photos by Emilly Prado. Faces have been obscured to respect privacy rights.

MacLaren Youth Correctional Facility looks nearly identical to private university campuses across the United States. Located 45 minutes outside of Portland in Woodburn, Oregon on a stretch of 172 acres, the youth who are incarcerated here casually walk across paved paths between housing units and series of brick buildings wearing sweatpants and Nike sneakers. Last week, Dr. Angela Davis visited and gave a presentation on mass incarceration.

While there are no shackles or orange jumpsuits, the soaring black chain link fences that line the facility serve as a physical reminder of the realty: hundreds of boys and young men call MacLaren home for years until the end of their sentences or until they age out of the youth correctional system—whichever comes sooner. Nearly half of all youth are serving out minimum mandatory sentences under Measure 11 crimes and many others have chosen to take plea bargains instead. Even as some face sentences twice the span of their lives, many are unexpectedly finding hope while locked up. 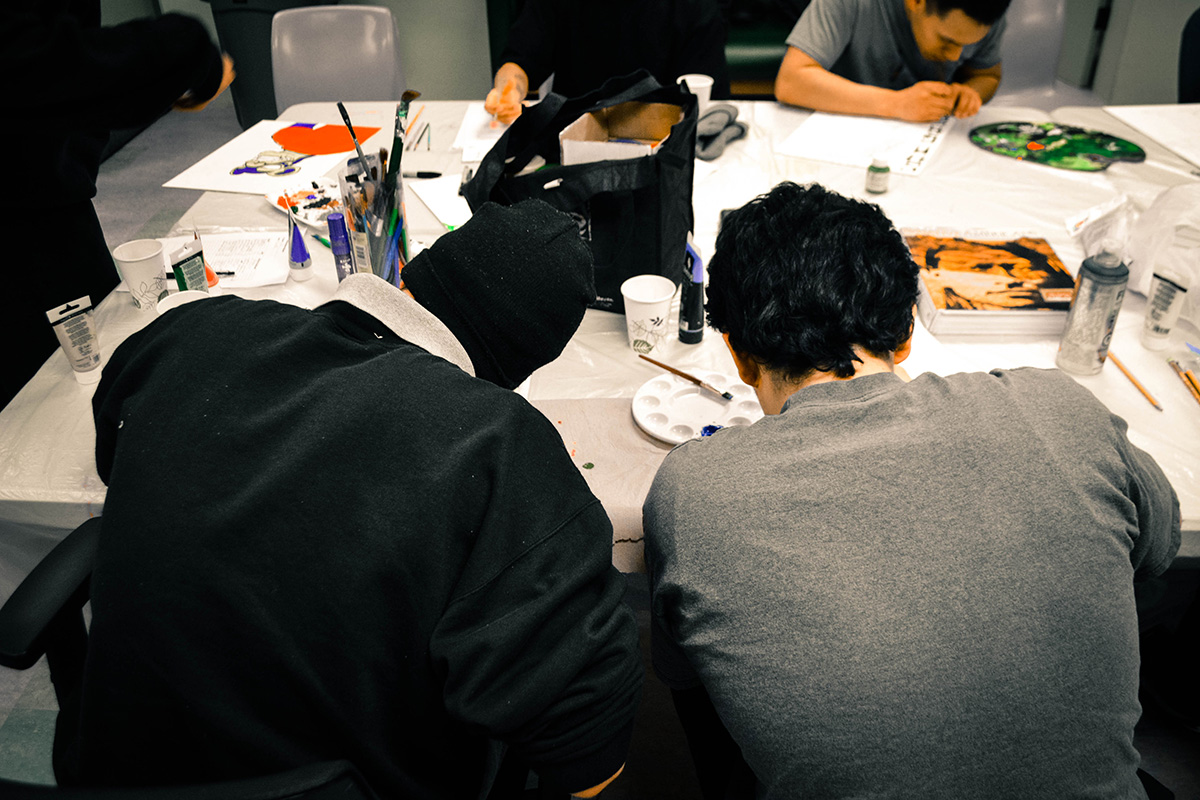 In 1994, Oregon voters approved ballot Measure 11 which established mandatory minimum sentencing for juveniles who commit crimes like robbery, arson, and murder. Under Measure 11, juveniles are tried as adults and are eligible for incarceration at youth facilities until they reach age 24. They are then transferred to adult prisons. Black youth are convicted at a rate 17 times higher than the rates of white youth for Measure 11 crimes and Latinx and Native American youth are similarly overrepresented.

When I visit the facility on a Friday night, more than a dozen youth, predominantly of color, are huddled around a plastic-lined table, intently working on art. Nearly every week since late 2011, Morpheus Youth Project (MYP) has run culturally-relevant arts-based programs on a range of topics like broadcast journalism, hip hop, personal finance, and theater. This week, they’re in the midst of a 10-week art and breakdancing class.

Carlos Chavez, executive director of MYP, says he became involved with supporting incarcerated youth in 2005. “These people are part of our community,” he explains. “They’re being removed from society for whatever they participated in and there’s a reason for that, but we can’t just forget about them. Most of these young people are going to be back in society. What do you want that to look like? They’re in a vulnerable state right now and we, now more than ever, need to be more involved.” 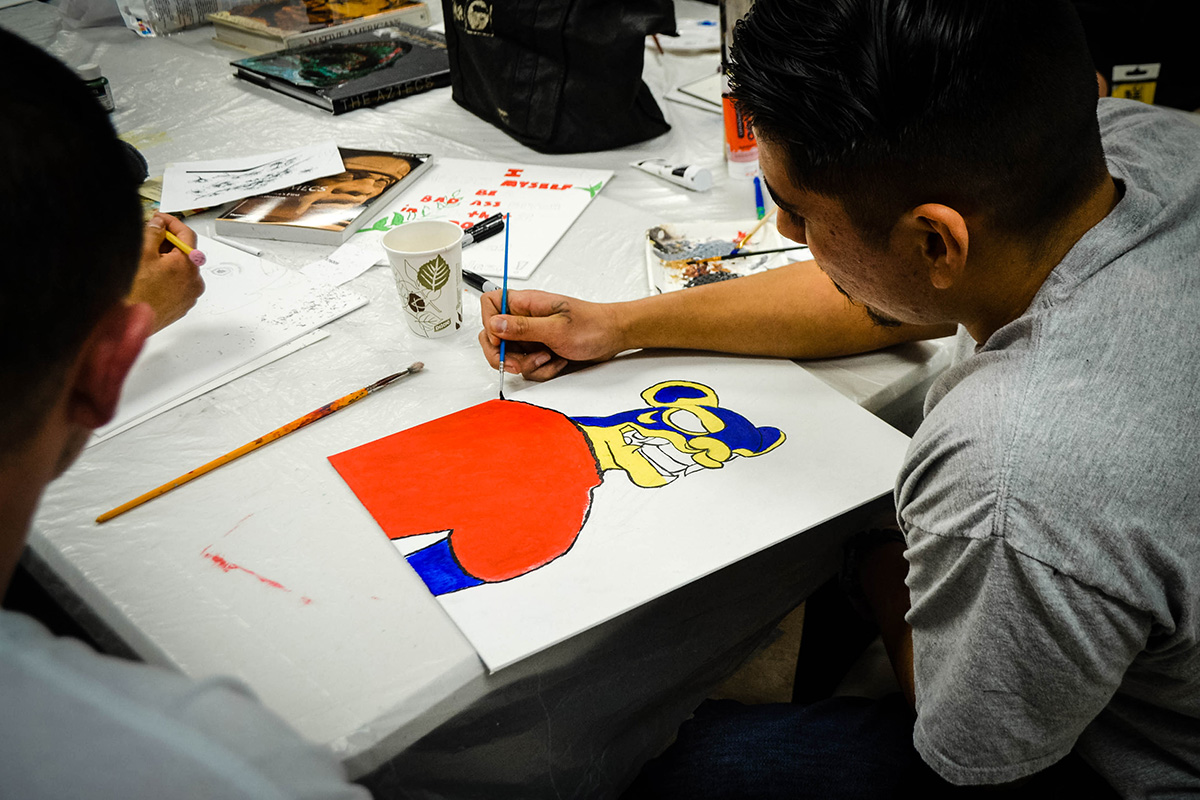 Trey, a 23-year-old who was charged with a Measure 11 crime when he was 17, says the groups at MacLaren, including MYP, have helped him better understand himself and the factors that contributed to his previous lifestyle and eventual incarceration. Understanding the school-to-prison pipeline has been key.

Trey grew up in Portland and later Texas, but he struggled academically in both places beginning in elementary school. “I couldn’t really read or write, so I acted up when the teacher called on me. The school didn’t know that I was dyslexic… [I] was perceived as a kid who was rejecting help.” Eventually, Trey received his first expulsion

The Education Department’s Office for Civil Rights found that Black students are three times more likely to be expelled or suspended than white students. Discipline disparities against Black students begins as early as preschool when paired with zero-tolerance policies and police officers in schools, they create the school-to-prison pipeline, or link between punitive action in schools and incarceration. Latinx youth are also disproportionately targeted.

Ezequiel, 22, also had difficulty learning in school and wasn’t receiving adequate support. He was expelled by 6th grade.. His father, a migrant farmworker, struggled severely with alcoholism.

“That just deterred him from being able to take care of the family,” Ezequiel says. “He kept going in and out of jail and my mom ended up by herself raising four or five kids. I couldn’t imagine doing that. It was really hard on her. It’s [my] starting point [of] getting involved with criminal activity.” 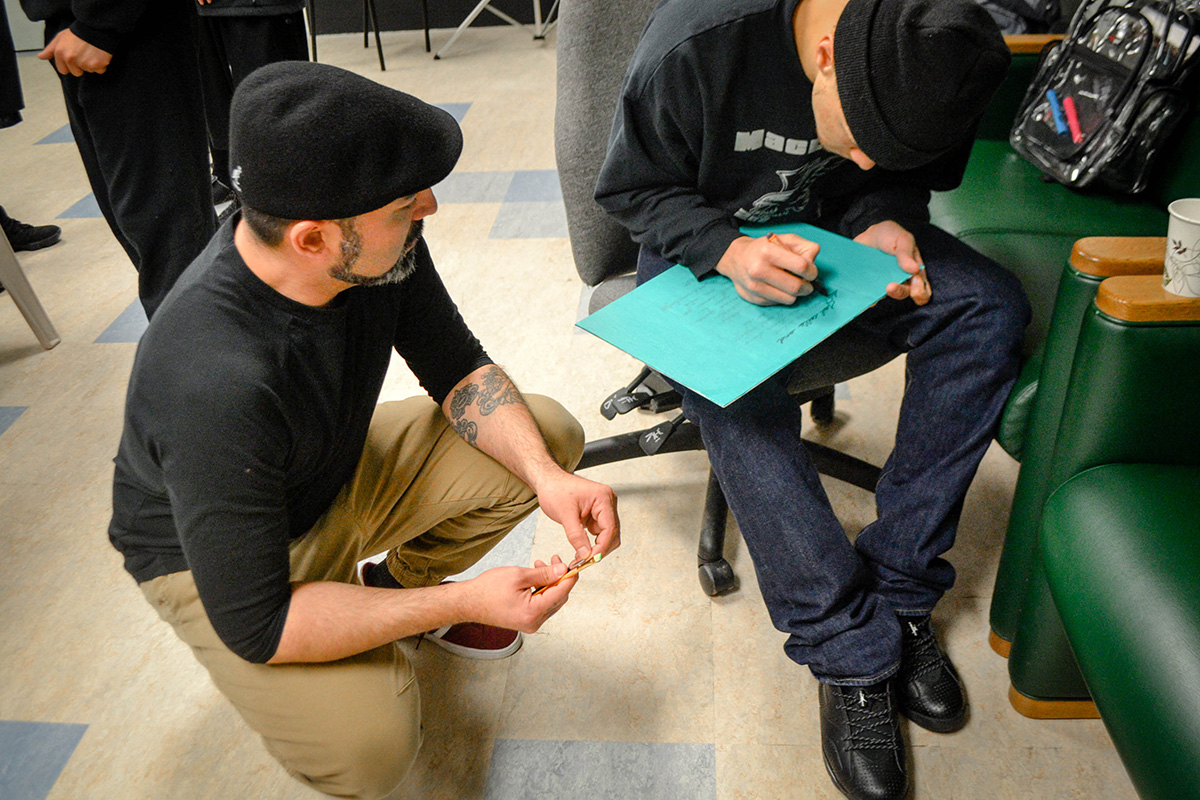 When Ezequiel saw his older brother getting involved in gangs, he trailed and was jumped in at 13. “I look back at those times and see I was just a baby running the streets trying to follow my brother and [feel] belonging,” he says. “[At 14], I got introduced to drugs and was doing methamphetamines… It came with a serious cost and consequence I didn’t comprehend at that young age.”

Two-thirds of youth incarcerated through the Oregon Youth Authority (OYA) are admitted with dependency issues and most report having parents with substance abuse issues too. OYA requires treatment programs for addiction and anger management when appropriate, but programs like MYP supplement these by focusing on personal development and self-empowerment.

Chavez grew up in California and witnessed the effects of gangs on his family. He shares similar lived experiences and brings that into MYP’s approach. “I was on the fringes like a lot of these teenagers,” Chavez says. “If I lived here in Oregon, I could have very easily been caught up on Measure 11 related charges, but when I was a little kid, I had family members that were in and out of jail.”

Although they were incarcerated, they were still family. “I was able to see it from another perspective,” he says. “My cousin Justin was getting [into trouble] because of other factors that had happened to him throughout his life.”

“When we’re being authentic with hip hop, all of the elements that kids are searching for when they’re getting involved with gangs [exist in hip hop,] Chavez says. “Looking for unity, camaraderie, family, to own something of their own, to belong, and there’s even an economic piece.”

“[B-boy] culture goes deeper than a lot of people understand,” he continues. “Instead of getting jumped into a gang, you’re dancing your way into a crew. It naturally provides them with what they need so that they can replace gangs with something positive and healing.” 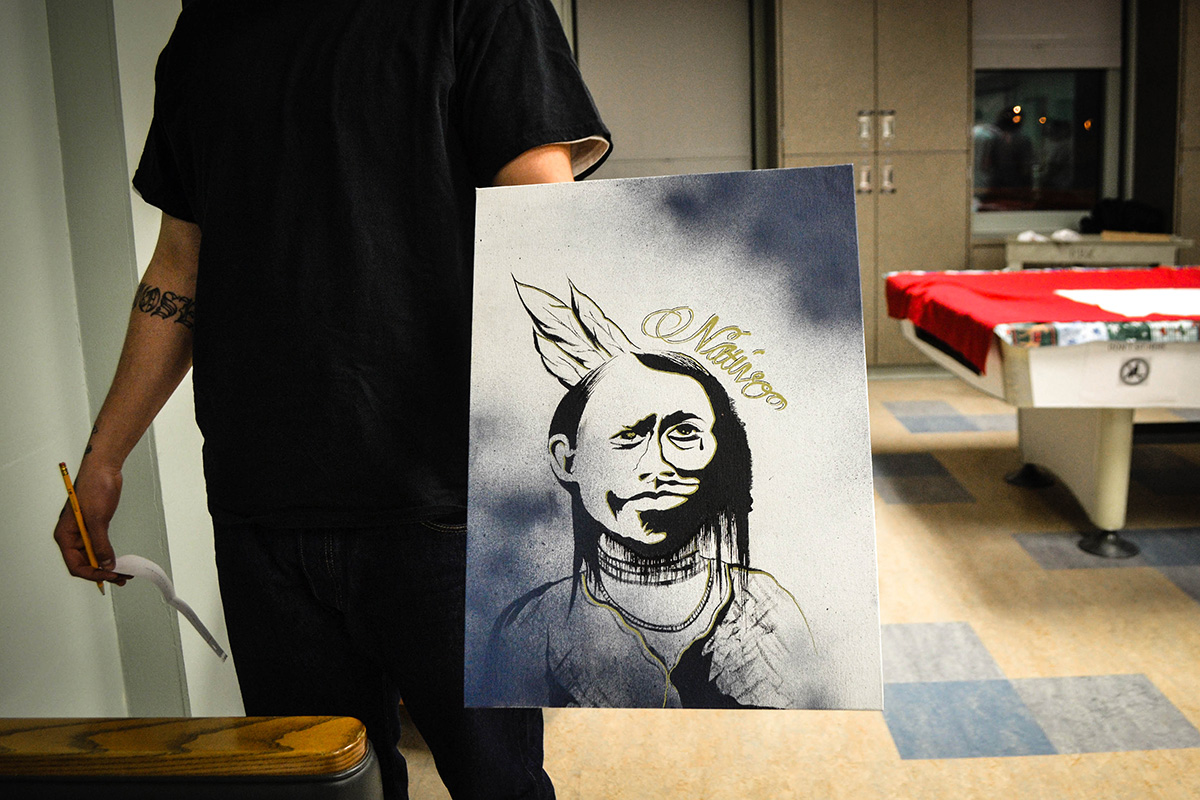 “The talks were hella cool. [We discussed what] it’s like in a correctional facility, the school-to-pipeline, some laws that we don’t agree with, and our lives,” Tyler says. “Basically, getting our message out to the world. [Chavez isn’t] only doing things inside of the facility, but he’s doing things on the outs.”

Tyler says one of the most difficult things about being incarcerated has been missing out on connection with the outside world and time with his family.

“It’s probably the worst news you can go through when you get told your mom only has less than a year left to live,” he says. “It hurts. I can’t even be there for my mom when she needs me the most. I can’t spend my last minutes with her because I chose to be selfish and do something stupid. Parts of me want to beat myself up for it, but at the end of the day, I can’t.”

Tyler still has four years of a nine-year sentence until he’s released. Though he can’t physically be with his mother all the time, he’s appreciative of the time he does spend with her.

“Some of the unit managers have their phones and they let me Facetime her,” Tyler says. “Whenever my brother or my sister come to visit me, they’ll bring her. They’re some of the best visits because I’m with my mom and get that unconditional love she gives me. One thing she wants for me is to help people who are like me, so I have to do that.” 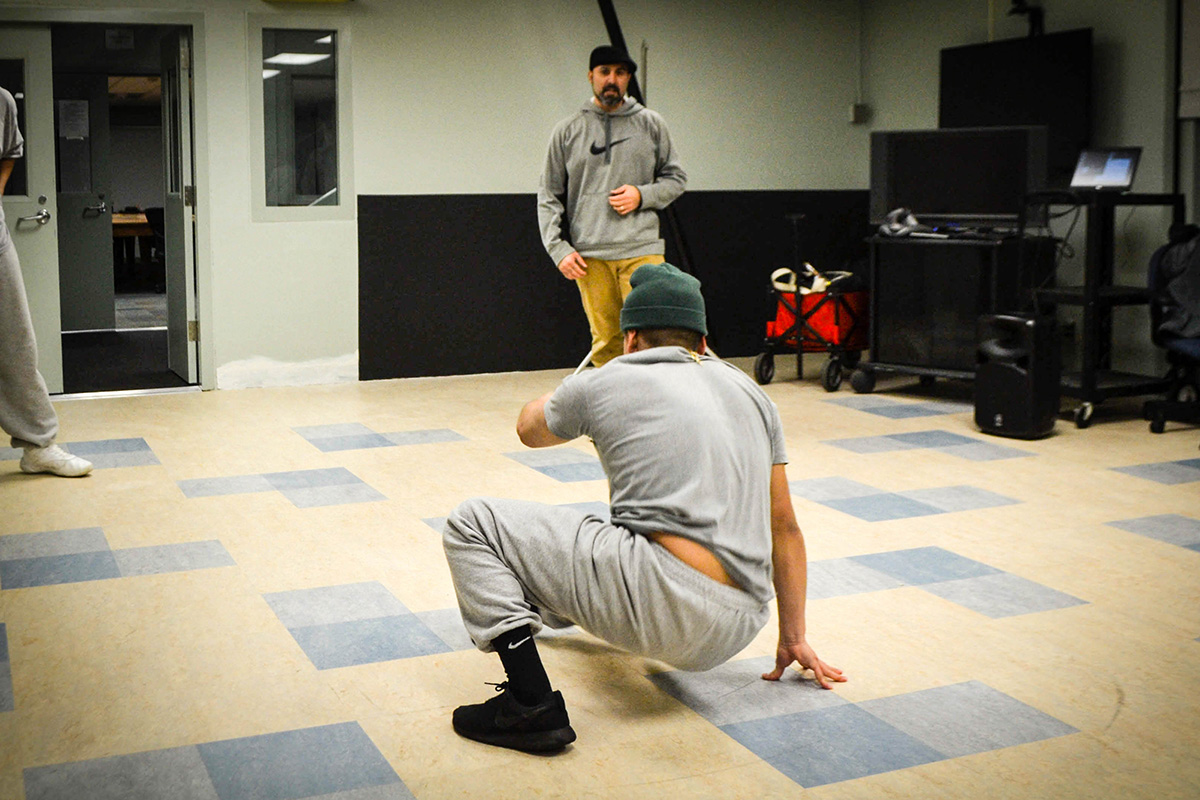 When I interrupt Trey for our interview, he’s painting a prison guard tower against a teal background. Another youth has just finished adding the poem Trey wrote for his 7-year-old daughter in elegant cursive script. He says he’s sending this to her because, while he can’t be the father he wants to be for her, he wants her to know he’s always thinking about her.

Trey lost his own father to gang violence when he was just a kid. His daughter, who was still an infant when Trey was incarcerated, will be in middle school by the time he gets out. He says he wants to do better while he’s at MacLaren so that when he gets out, he can provide for himself and his daughter.

“I ended up getting involved in a life that I’m not going to say wasn’t me, but it wasn’t me. I was just naïve, young, dumb, and ignorant,” he says. “I wasn’t even the dude [I am today] two or three years ago, but I started to talk it up and write poetry. I felt like I had a unique story that I wanted people to know. It wasn’t just for me because I’m not the only one, you feel me, who is going through the shit I’ve been through.”

Since being incarcerated, he’s learned what his emotional triggers are, how to communicate effectively, and has earned his high school diploma which he never expected. MYP and Hope Partnership, another on-site organization that offers class and skill-building, have paved the way for those changes.

“I just fell in love with the group. [Chavez] gave me the tools to open up my eyes, but he didn’t force it on me. I slowly picked up on it, started picking up one tool at a time, then picked all of them up.” 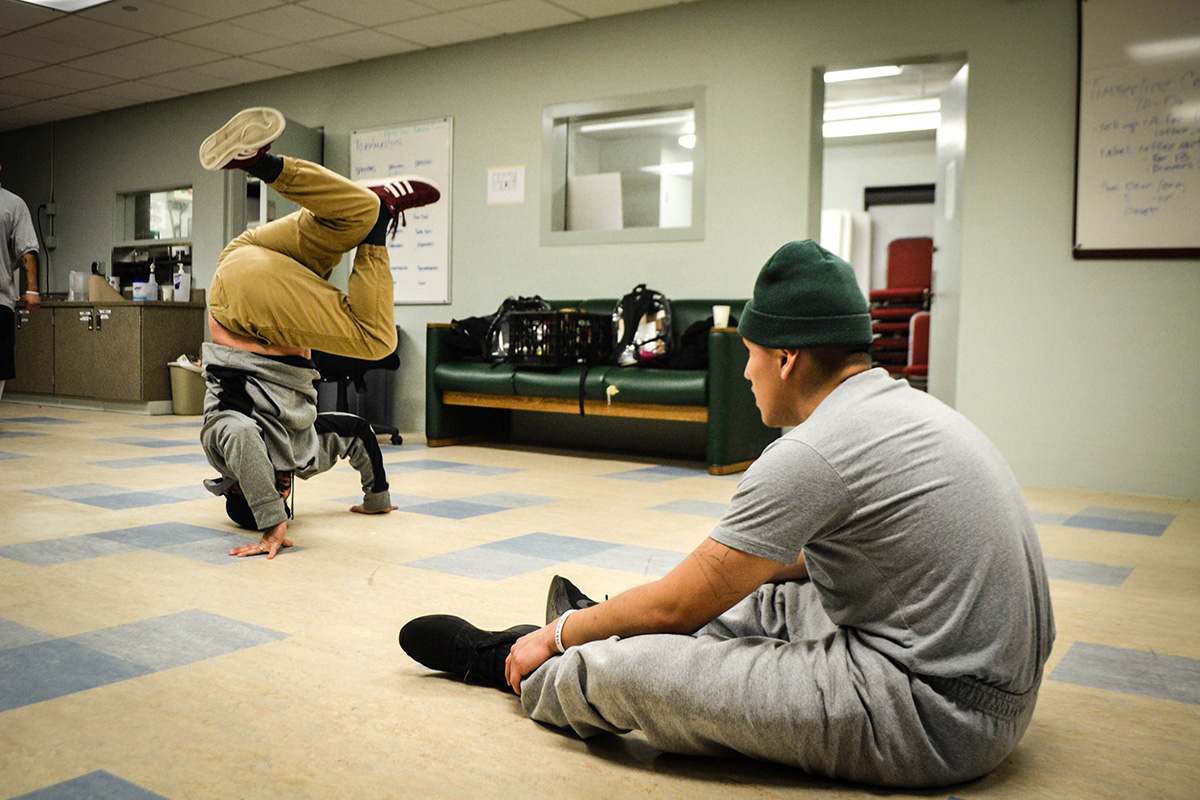 The more touch points we have with these young people as they’re going through that justice system, the more likely that we’ll be able to connect, build relationships with them, and create opportunities for them so that they’ll be more successful.”

Chavez is looking forward to a forthcoming contract to establish additional MYP programs in more of the OYA’s 11 facilities throughout the state. “These young people are our future,” he says. “We have to make an investment in them now. If we want a better world, we have to make that happen.”

If you’d like to support Morpheus Youth Project, consider making a tax-deductible cash donation to the 501(c)3 organization here or by sending the youth supplies for their new kitchen through their Amazon wishlist.

Emilly Giselle Prado is a Chicana writer, photographer, and library assistant living in Portland, Oregon. Her work focuses on amplifying the voices and stories of people from traditionally marginalized communities. When not writing or taking photos, she teaches writing and zine-making to students of all ages.