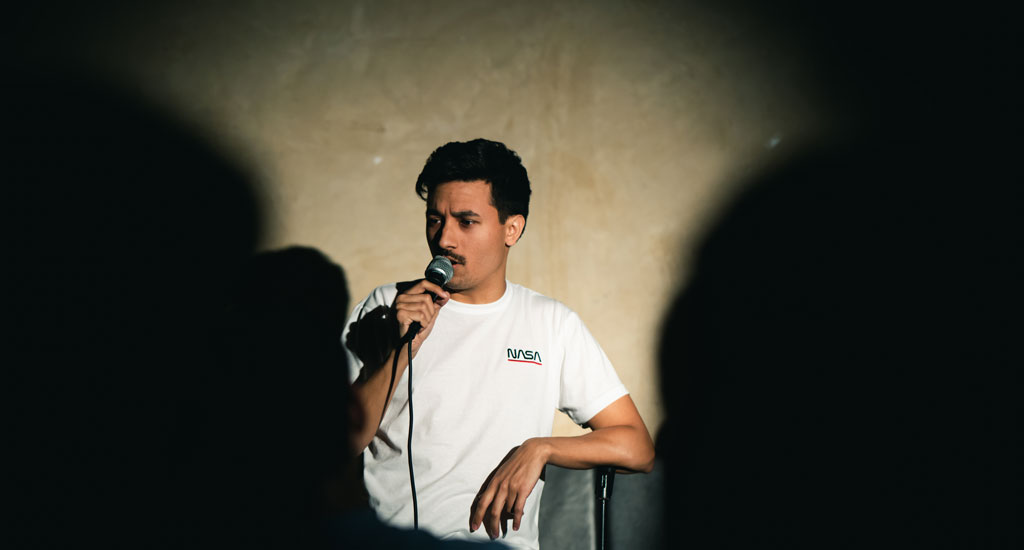 Ismael Loutfi has always been religious. Truth be told, he feels he’s become more religious as he’s gotten older. It has made him sort of an anomaly in a time when millennials are less likely to affiliate themselves with faith-based groups all across the spectrum.

The 26-year-old Syrian-American comedian has found a way to blend his love for comedy and his devotion to Islam in a way that allows audience members to laugh along with him—regardless of their own beliefs. He’s found his niche, and it’s what set him apart as he made his way from performing in Florida dive bars to now writing full-time on Netflix’s award-winning show, The Patriot Act with Hasan Minhaj.

In a recent phone interview, Loutfi spoke about how a failed marriage led him to pursue comedy, why he started talking about his religion on stage, and the groundbreaking effect that Muslims are having on the comedy circuit as a whole.

What led you to pursue comedy?

I just always loved it as a kid, you know, or at least as a teen. But I got into it and YouTube, of course, makes everything super accessible, so I was just watching everything always. But then the reason I started stand-up was because I kind of had this wife when I was in high school.

Yeah, it was a weird Muslim thing. I eloped, I got married to this white girl, and we were together for six months and it was cool, I had a good time. It was fun. But we got divorced six months later, and it was right when college started. So [I] was like, “You know what? I’m going to start going to open mics.” And that was kind of what started it. It was really bad for the first six months. The first year was terrible. But the day we broke up, I told my sister, “I’m going to start doing comedy.”

How did your family and your parents react to it?

My sister was really supportive, but I didn’t tell my parents until I had been doing it for a while. I told them, “I’ve been doing this, and I’m doing pretty well at it.” So I was doing that in Gainesville, which was where I went to college, and just kind of awful bar shows—bombing and nightmarish in front of all these [people]. Truly, probably the worst time of my life, that first year of doing stand-up.

After doing that I told my mom, “I’m going to move to Atlanta, Georgia. I’m going to pursue it there. Just to get better.” She was just kind of into it because I cared about it a lot. That’s kind of what led to everything. Lived in Atlanta, moved to L.A., and now I’m in New York.

And who were some of your influences during that time?

Early on, I’d say Doug Stanhope [was] a big influence, and Tig Notaro, and I mean this was a while ago, but Louis CK was a big influence too, unfortunately. But what are you going to do? A different time. David Sedaris, too, was a big influence. But those were the main guys. Oh, and Rory Scovel. The funniest human being.

In your sets, you talk a lot about your religion and growing up in a Muslim home. Why did you choose to focus on that? Is that something that just happened naturally, or did you make a conscious decision to focus on it?

So when I first started comedy, I just wanted to be able to just do regular jokes, you know what I mean? I didn’t want to be a guy who talks about being brown or whatever. I was very against that. But the more I did it, the more I realized that every relatable thing that I think I can talk about comes out really weird because my entire upbringing was so specific.

So I’m trying to be relatable, and nobody can relate to what I’m saying, you know what I mean? How can I relate to people when I’m 19 years old and a divorcee? I’m not drinking in a bar, it’s all very niche. So that’s what kind of led me to, “Oh if I talk [about] being a Muslim, those are things that I know more than probably anybody in comedy, or at least in my age group.” I figured that this is a thing I can talk about that I know everything about… that’s what made it the best thing.

Have you gotten any feedback from the Muslim community?

Yeah. For sure. I mean right now there’s kind of a boom in the brown comedy space. There’s a lot more Muslim comedians than when I started.

And the community kind of wants Muslim comedy shows and stuff. I’ve done a bunch, actually, over the last couple of years. I’ve performed in mosques and community centers and places that are not conducive to a comedic atmosphere. They’re purely sober and stuff like that. Very far from any kind of anything comedy. But it’s nice because they respect that it’s a career, at least. 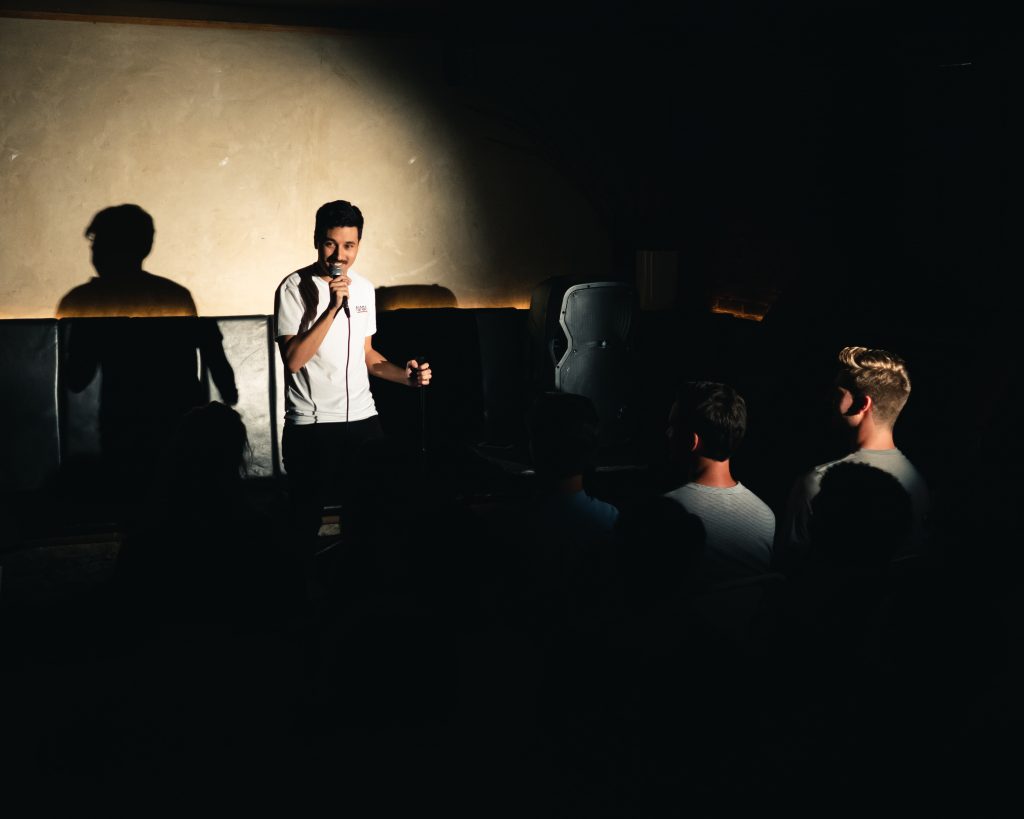 We have shows like ‘Ramy’ on Hulu now, and that obviously talks about one person’s Muslim-American experience. What does that mean to you that there’s more acceptance in a time when you think there wouldn’t be towards this community?

I loved Ramy. I watch it. I thought it was so good.

I think the Muslim community is going to be, you know, like when a comedian’s on stage, and he says, “I’m Jewish,” the whole crowd is like, “Well, obviously.” So that’s expected. I think in the next few years it’s going to be the same thing for Muslims. It’s going to be like, the comedians on stage, they kind of have a tan, [and] they’re like, “I’m Muslim,” and the crowd is going to go, “Of course. Yes, of course, you’re a comedian so thereby you are a Muslim. That’s how it works.” I feel that’s the way it’s headed. I don’t know if there’s something about the marginalization and the niche of it that makes it conducive to, I don’t know, being funny? I don’t know.

What has it been like working on ‘The Patriot Act’ and working with [Hasan Minhaj] who has paved the way and is paving the way essentially for this brown comic movement?

Yeah, it’s pretty cool. He’s a very silly guy. He’s been in it for a long time and kind of paved the way back in the day for someone like me. I don’t know what to say. I respect him a lot.

Do you remember the first moment that you decided to be so open with your religion on stage?

Yeah, I mean it was one joke. A lot of this is just a timeline of shitty jokes—that’s kind of the way I think about comedy for myself.

So the first joke that I felt like, “Oh, this is an interesting way to talk about a thing that I can talk about,” was, “I don’t drink alcohol.” This is what this was about because this was such a f——king, big annoying looming part of my life was that I didn’t drink.

[The joke was], “I don’t drink alcohol because I’m a Muslim, and Muslims believe that alcohol makes people act irrationally. Which explains why Muslims never act irrationally.” So that was the first bit, and that would kill. It’s not that good of a joke, it’s fine. Corny. But f——king it was my bit. And that’s when I first noticed talking about being a Muslim is a way to kind of communicate who I am.

How did people react?

Oh yeah, people loved it. I mean it’s kind of a double-edged sword, that sort of comedy. And it’s comedy I still do, you know,  in the effort to be relatable and to meet people on their level. There’s a part of it that is probably going the wrong way. Especially if I’m just performing for completely random audiences. I had to just come to terms that some of them are laughing in a way that’s racist. But at the same time, I’m owning it. So they’re laughing at me and at my joke. So in a way, it’s kind of a validation of who I am, and Muslims overall, that way.

A lot of our generation grew up in religious households all across the spectrum, and most people, as they get older, they tend to stop practicing different things. Was there ever a point for you where you thought, “I don’t know if I believe this?”

Um, I wish I could say yeah because that would be a more compelling narrative. But no, I’ve only actually gotten more religious with age. It’s because of the friends that I have in L.A. I have Muslim friends in L.A. who are comedians, and that really helped me a lot. Ramy [Youssef] actually is the reason I started praying five times a day again is because he was like, “Dude, you’ve got to pray five times a day.” And I was like, “all right.”

I mean, I’ve only really struggled with it once a few years ago because I went to [a] mosque in Atlanta and this guy who worked the mosque was just a f—king, like, he was a huge dick to somebody, and he pushed a person, and it was a guy who worked at the mosque. I was like, “What?” I told a higher up person, “This guy is an animal. You need to fire this guy.” And the dude was like, “Yeah, I mean, that’s just Mahud,” or whatever.

I didn’t pray that night. I remember making an active decision. I’m like, “I’m not going to pray tonight.” That was my rebellion, and I still feel bad about it. I still can’t believe I took the day off.

How much does your religion play into your identity?

I mean, it’s just kind of everything about who I am. Being a Muslim and trying to practice and struggling with that and doing comedy has sort of been the way that I can kind of live sort of, my Islamic kind of values in a way. But yeah, I don’t know how to answer that question. 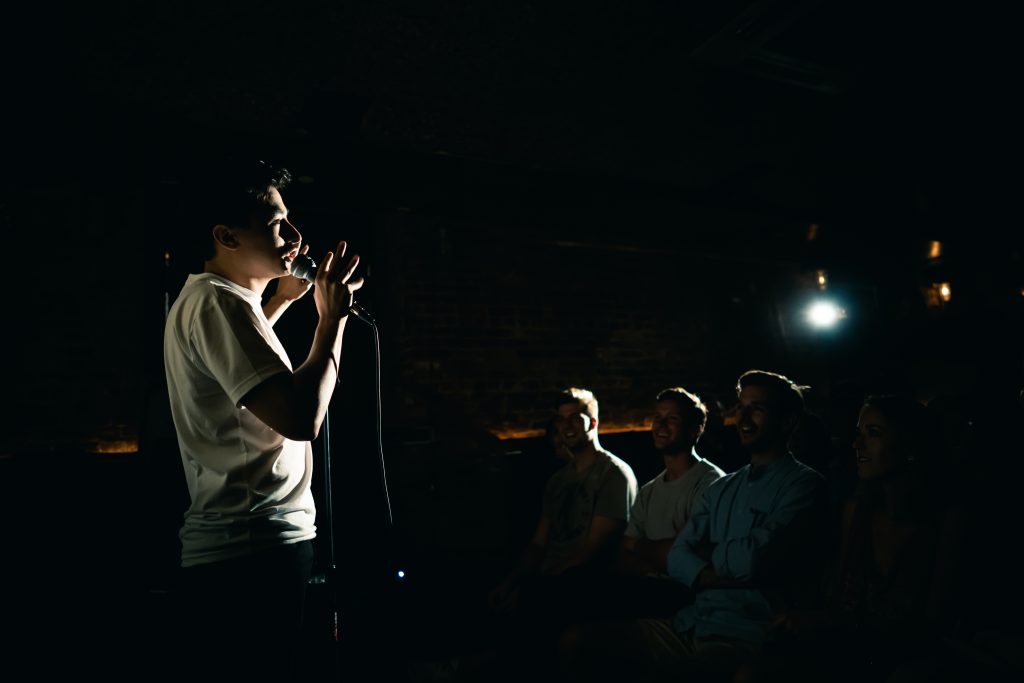 In your opinion, what would you want people to know about the Muslim community that they’re obviously getting wrong?

I mean, of course, there are Muslims who do everything. But when you think of the stereotypical bearded, hijab-wearing, practicing Muslim, they’re so far from being scary because they’re so deeply, deeply saccharine and cheesy about how much they love God.

It’s like Christian rock bands. People think that’s cheesy. They have no idea. I mean, dude, if Muslims started taking up guitars you have no idea how cheesy that would be. I mean it kind of would be. But you want to know something? Muslims who are devout believe that certain instruments are against it so they wouldn’t pick up a guitar. That’s how deeply corny they are. They’re church people times ten, and they’re sweet, and yeah.

Hopefully, that’s not counterproductive in some huge way or problematic, but that’s my experience as somebody who’s deeply embedded with Muslims everywhere.

Thanks, Ismael. Where can people find you?