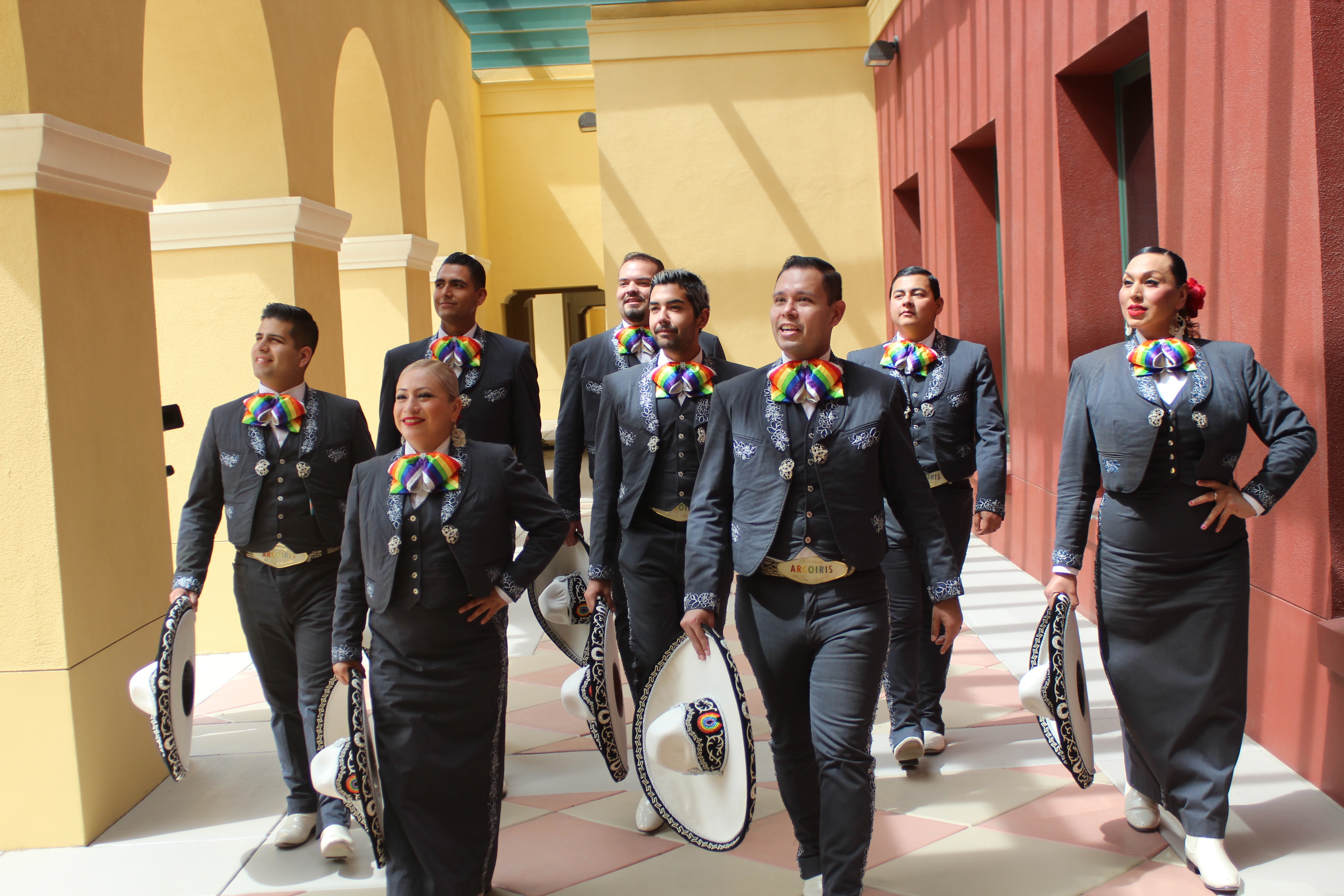 Carlos Samaniego still remembers the night that he and the rest of Mariachi Arcoiris de Los Angeles played for the first time at a gay Latinx nightclub. It was Valentine’s Day, and the packed room was dark and loud as musicians prepared to approach the stage. Suddenly, the music turned off, the room filled with murmurs of anticipation, and microphones were switched on as Samaniego shook off his nerves and began to perform for the crowd.

“It was scary to be able to get back on that stage and see an audience and do our music. It was very nerve-racking for the first time,” Samaniego said.

The mariachi group was met with cheers and applause as they finished their set in front of an accepting audience. Mariachi Arcoiris de Los Angeles is the first all LGBTQIA+ mariachi group and the first mariachi group to feature a transgender woman as a mariachi singer. They are unapologetic at making their name and identity known. The musicians wear rainbow-colored ascots, and their name arcoriris translates to rainbow in Spanish—a symbol of queer pride that was made famous in the 1970s by San Francisco artist Gilbert Baker.

“We not only create a safe space for the musicians in the group, but we also create a safe space for our audience. And we invite the audience to share that space with us.,” Samaniego said. “I’ve been written to by other mariachi musicians from small towns in Mexico who say, ‘I can’t believe something like you exists. I wish that you were here in Mexico so that I could be a part of it. Because of you, I decided to come out to my family.’ So, it’s all very powerful stuff.”

The group was founded in 2000 by Samaniego after he grew tired of the constant machismo and homophobia that he encountered in traditional mariachi groups. He faced bullying and discrimination but first dismissed it as others excluding him because he was a Mexican-American playing traditional Mexican folk music. It was not until later that he realized he was being bullied because he was gay. He was proud of who he was and was not ashamed of his identity. Still, his fellow group members in traditional cisgender mariachi circles failed to acknowledge this part of who he was.

“There was just a lot of mocking. One of the things that stood out to me regarding the bullying was the constant want for me to be attracted to women. [It was] this constant insistence of trying to hook me up with girls during the breaks. It was all the time, all the time, all the time. And it was bad because I felt like they weren’t respecting what it is that I am.”

Instead of backing down or straying away from the world of mariachi, Samaniego decided that he would not go down without a fight.

He created the first version of Mariachi Arcoiris with all gay men for a pride event at Cal State Los Angeles. The on-campus Gay and Lesbian Alliance was hosting a mock wedding as a form of protest—same-sex marriage was not made legal until 2015—and Samaniego knew that they couldn’t host a proper mock wedding without a mariachi band.

Mariachi Arcoiris disbanded after performing for less than a year, which Samaniego said resulted from his lack of experience as a mariachi director. He revived the group twenty years later to perform that memorable Valentine’s Day night in Hollywood. But this time, the group was inclusive with a variety of queer, non-binary, and transgender members, who came together with a push to create a safe space for those in their community, and show the world that they could both proudly represent their culture and the LGBTQIA+ community.

“It turns out that we’re role models. And I’m very happy to step into that role and to take that responsibility. There’s this one transgender girl in a high school in Texas who wrote to us and said, ‘You guys are my heroes.’ and it’s just like, it brings almost tears to my eyes to know that and to see that. And she plays mariachi in her high school.”

Samaniego also grew up playing with a mariachi group in his teens. He grew up surrounded by music. Both his father and his grandfather were musicians, and as a young boy, he would continuously sing songs like, “Me Nace Del Corazon.” A song that was recorded by Spanish musician Rocio Durcal but first performed by Juan Gabriel.

Similar to Gabriel, Samaniego and his team are unapologetic with who they are because they know that embracing who you are can empower future generations to do the same.

“We’re not going to hide who we are. And we’ll play through some super like hardcore, like mariachi music, like sonnets and all that stuff. We get to show them that this little group of whatever they want to call us can play the shit out of mariachi music. And that’s what I want them to get out of it too. It’s like, it doesn’t matter who you are. And the fact that I’m openly gay and I can play the heck out of mariachi music. Sometimes, even better than straight guys can play music. And I will say that shit.”

Overall, Samaniego hopes that Mariachi Arcoiris de Los Angeles will inspire others to pursue what they love despite any obstacles.

“Do what you’re passionate about, regardless of what that is, regardless of how you identify. But do it with conviction, do it because you love to do it. And don’t mind the bad things that can be said about it, about you, or about what it is that you love to do. Just do it. If it’s what’s going to make you happy, then that’s what you have to do.”