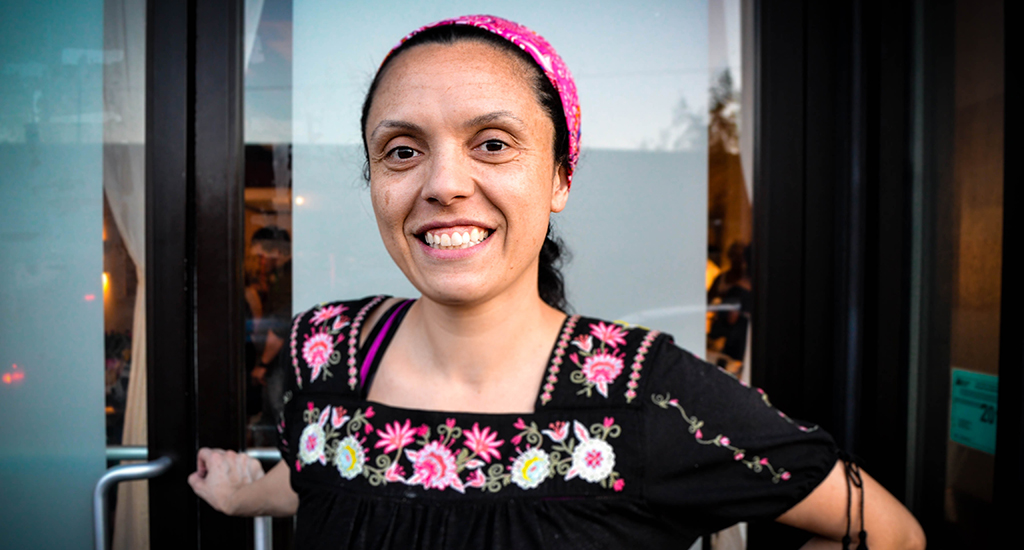 Chef Antoanet “Ant” Aburto is proud to be punk. Like the pillars on which the punk movement was built, Aburto centers communities of marginalized people and demands space as a woman of color in a homogenous industry, on her own terms. For Aburto, being punk most readily manifests in her decision to labor tirelessly to host vegan Peruvian pop-ups every month for causes close to her heart. And while pop-up fundraisers are to be expected within the Portland dining scene, every event is fine-tuned and created with remarkable intention, from meal creation to mission.

“I take the whole month to do what restaurants do every day,” she says. “I think about every color and every texture—not just the flavor—on top of thinking about how [to] make it vegan. I don’t repeat the same dishes. Every menu is different. It’s fun. It makes me happy.” 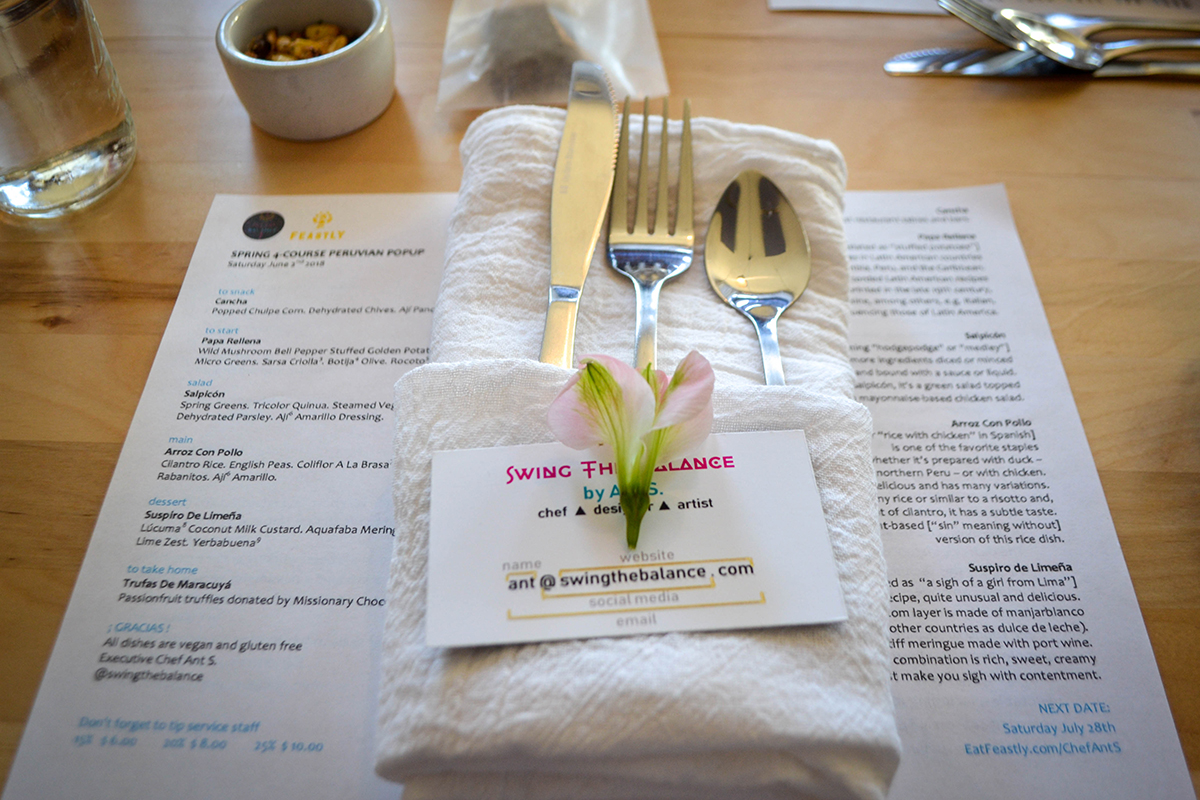 During her spring banquet, dinner guests ate mounds of papa rellena, a roasted cauliflower equivalent of arroz con pollo, and a syrupy suspiro de limeña—all ready to be washed down with homemade, fruit-laden chicha morada.

“Peruvian cuisine is not known well enough [in the United States] and it’s so good,” she says. “It’s more Mexican focused [here, but] there are other options.”

Now known as Swing the Balance, the multi-course meals often sell out days before seatings. And true to name, Swing the Balance pop-ups disrupt the status quo of the food industry by giving back most profits to local nonprofits and hiring entirely women-identified staff for events. Past fundraiser beneficiaries include radical, body-positive gym, Liberation Barbell, a daytime sanctuary for houseless women and children called Rose Haven, and Pueblo Unido PDX, a Portland-based non-profit advocating for Latinx community members in East County regardless of legal status. 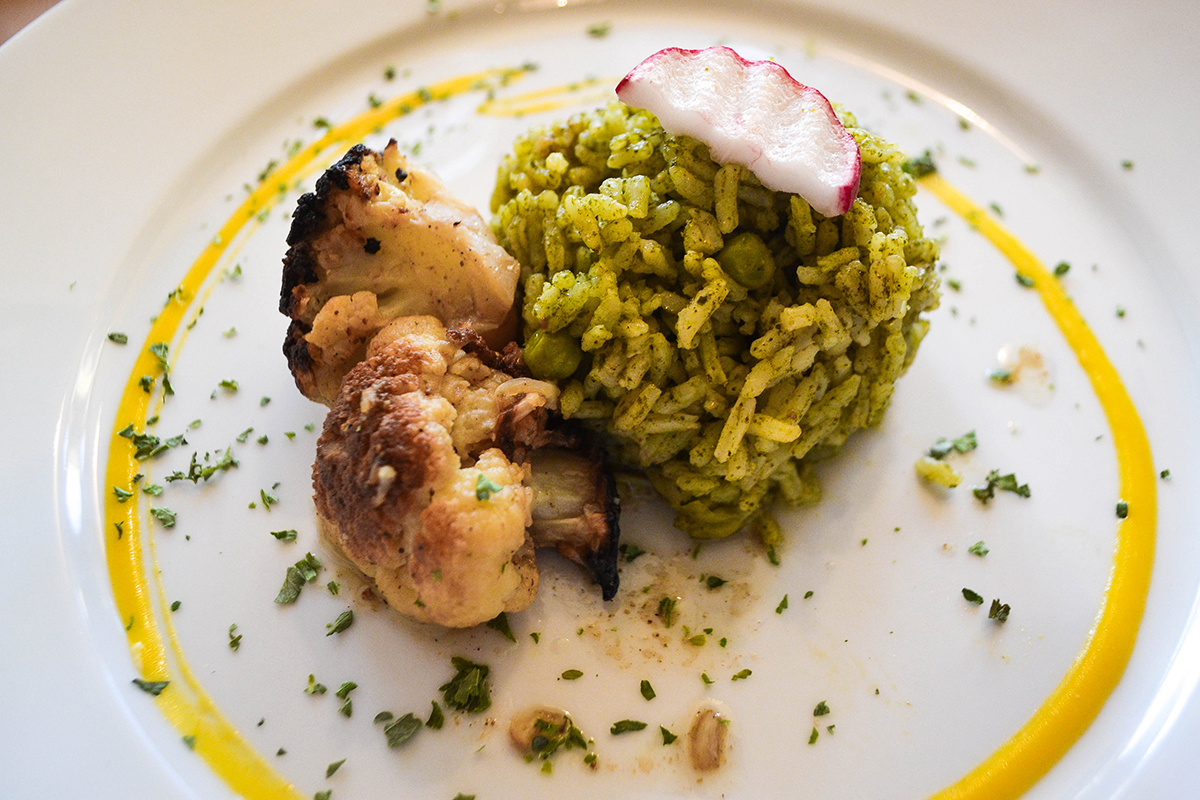 Aburto’s care for her work as a chef and activist stem intimately from her own struggles. At 19 years old, Aburto and her family left their hometown of Lima, Peru to start a new life near the south coast of Florida. Knowing no English, Aburto landed a cashier role at a nearby McDonalds and over the next decade, she’d work her way through the industry washing dishes, operating registers, and eventually, managing a Chipotle in Orlando in 2005. Although she didn’t make the change to a vegan diet until 2010 while in culinary school, she credits the Chipotle with igniting the transition. “There doesn’t seem to be a connection, [but] it’s a place that makes you aware of what you’re eating” she says. Above all, however, Aburto credits Chipotle for her survival. In between McDonalds and Chipotle, Aburto faced houslessness—not once, but twice. She was living out of her car for the second time when Chipotle hired her.

The daily routine of a busy work schedule helped her push forward and regain a sense of control and balance in her life and though she found herself flourishing at the fast casual chain, she couldn’t quite remember how she had arrived in the new city, now three hours away from where her family lived. Years later, Aburto learned this mental blackout was the byproduct of a trio of untreated and undiagnosed mental health issues. 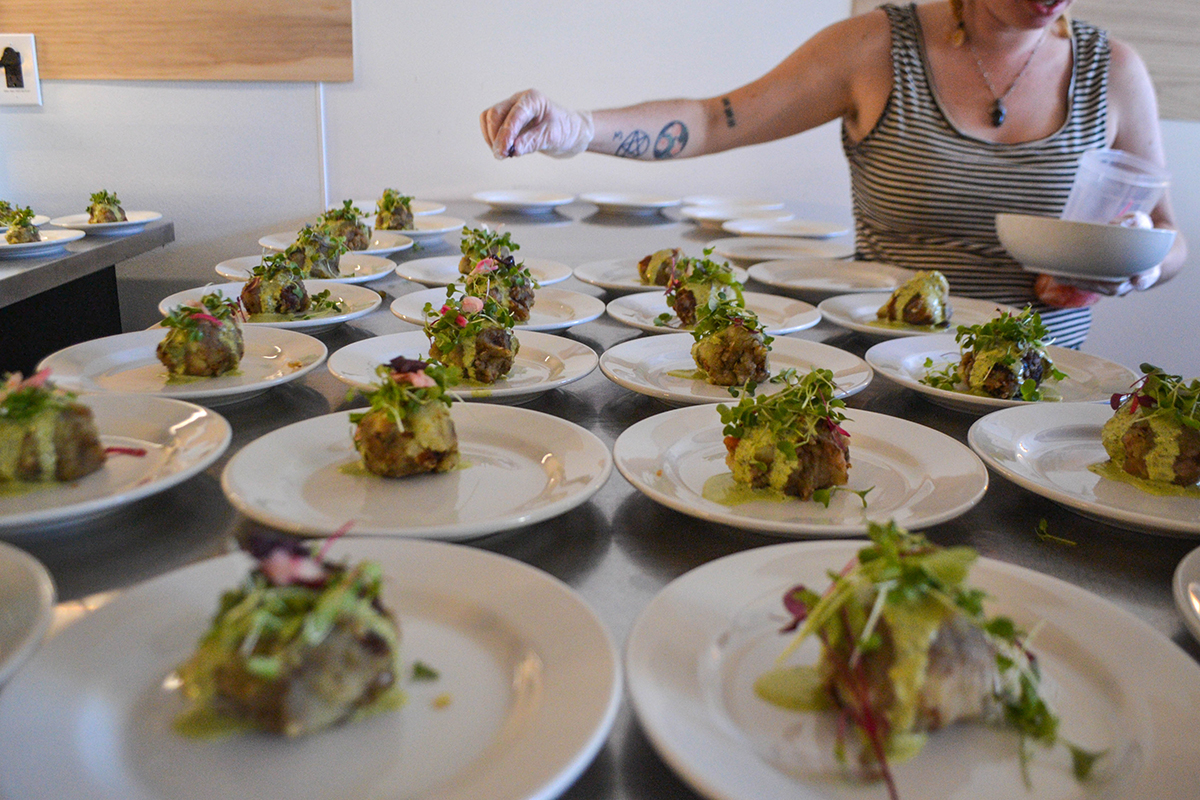 By 2010, Aburto enrolled in a four year restaurant management program at the Art Institute of Santa Monica in Southern California. After two years of building her culinary chops, however, she opted for an associate degree and less debt, having over a decade’s worth of experience navigating the food industry at all levels by that time.

“Even though I wanted to explore cooking, I didn’t want to be a prep person again,” she says. “So, I started doing pop-ups [in Los Angeles.]” In 2012, Aburto launched a series of vegan pan-Latin pop-ups and simultaneously held several general manager positions around Los Angeles before being tapped to open the revered plant-based Mexican eatery, Gracias Madre, in Hollywood as their manager. But after nearly five years of living in LA and finally working what she thought was her dream position, she hastily quit. 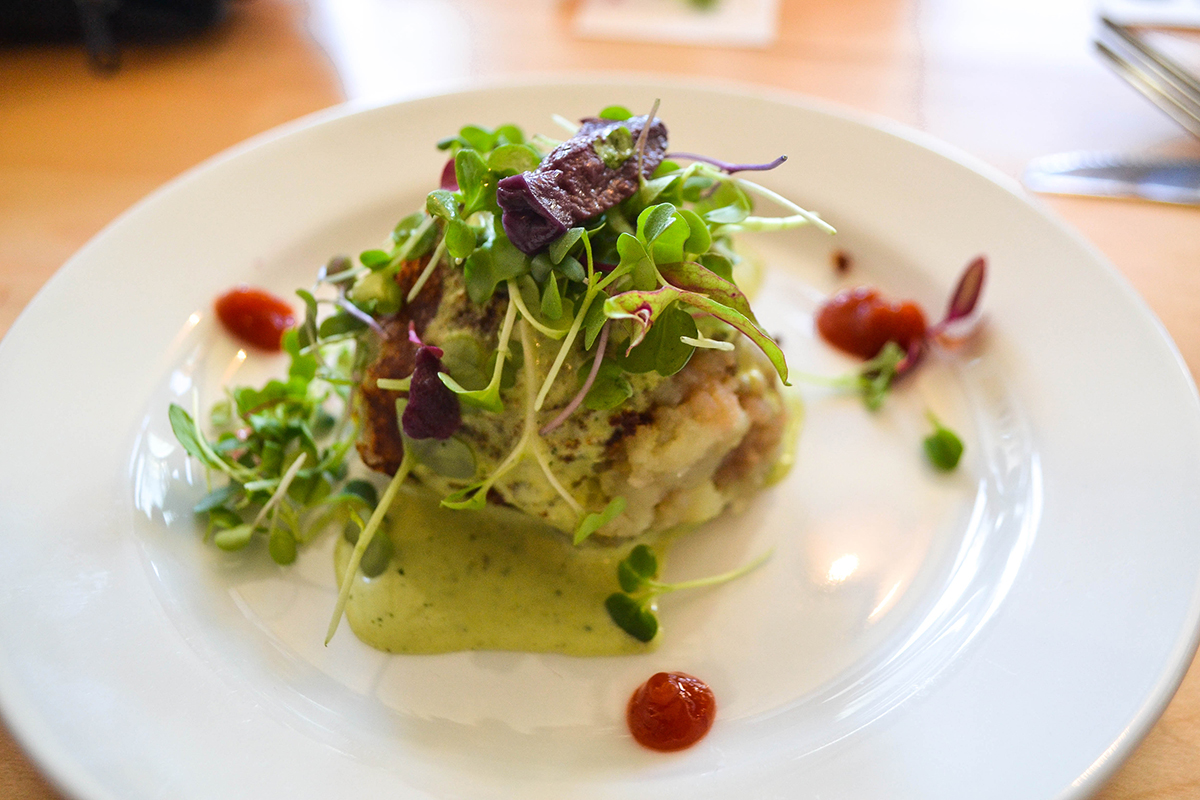 “I loved my job, my bosses were amazing, [and] my employees were amazing,” she recalls. “Everything in my life was perfect, and I was not happy. I was miserable. I had a breakdown and couldn’t stop crying.”

Aburto took a step back from the grueling pace of restaurants to slow down and focus on herself. With the help of therapists over the past few years, Aburto now identifies as someone on the autism spectrum, and was also diagnosed with two mood disorders. “I always knew something was different about me, [but] I just thought I was artsy and passionate and had all these emotions.” she says.

“In my culture, that’s not a thing that people talk about, and working in restaurants, nobody talks about [it either.] You work head down, 12 hours a day at least, on your feet, and nobody really takes care of [their mental health.] It’s fast-paced 24/7. I never knew I had to take breaks or take time for myself or balance my personal life and my work life. [I worked] 50 hours per week for 15 years straight.” 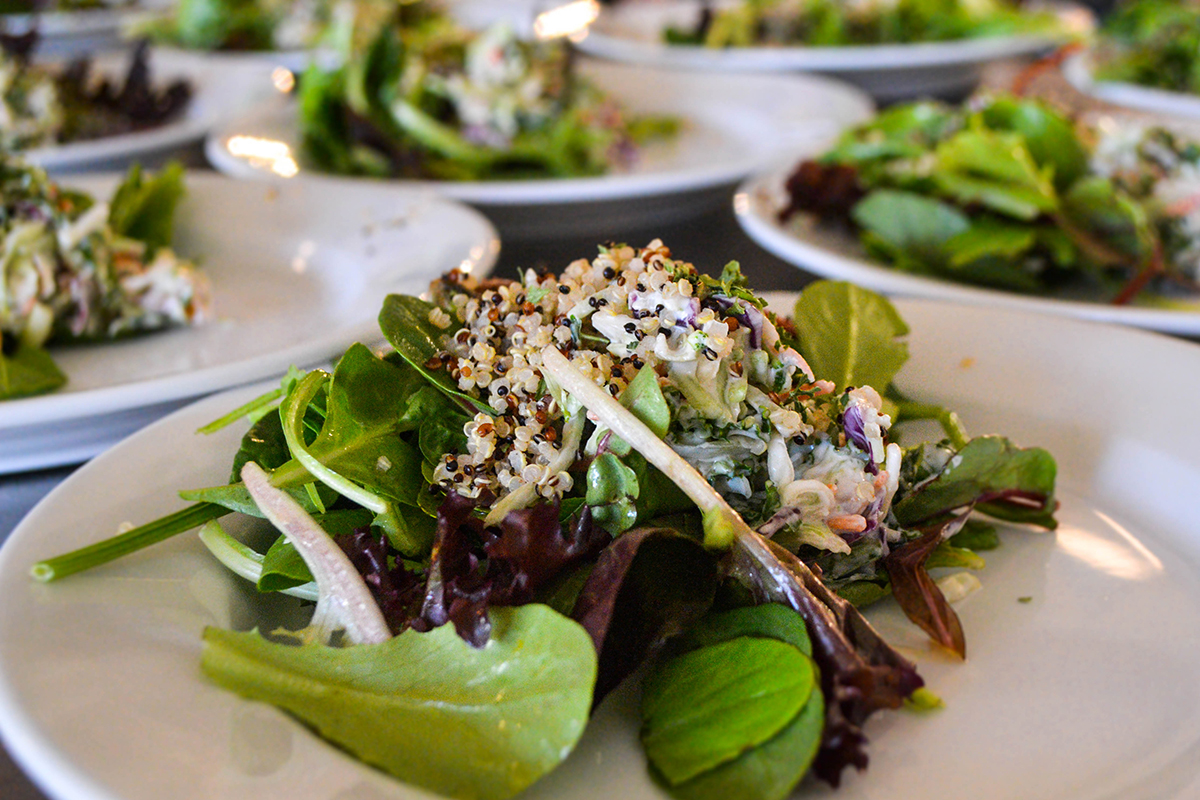 Since taking time off, Aburto has adapted her lifestyle with mental wellbeing at the forefront of every aspect. Monthly pop-ups afford her the ability to maintain a healthy work/life balance. Time for art and creative release are permanently carved into her schedule, and she pays acute attention to the foods she consumes and how they make her body and mind feel. And, equally importantly, she takes a combination of prescriptions on which she can truly thrive and continue her vital work disrupting the food industry. To mark her growth, she’s shed the name “Chef Toni” and Chica Vegan, which she often used in the past, in favor of going by “Ant” and Swing the Balance.

“The name is about balance for my brain [and] also balance when I make food or art. I want to talk more about mental health. It wasn’t something I shared, but now I’m in a place where I’m happy to,” she says. She hopes that being open about her process and past will allow other people with similar experiences to connect and feel like they’re not alone. In many ways, the diagnoses have been a relief. 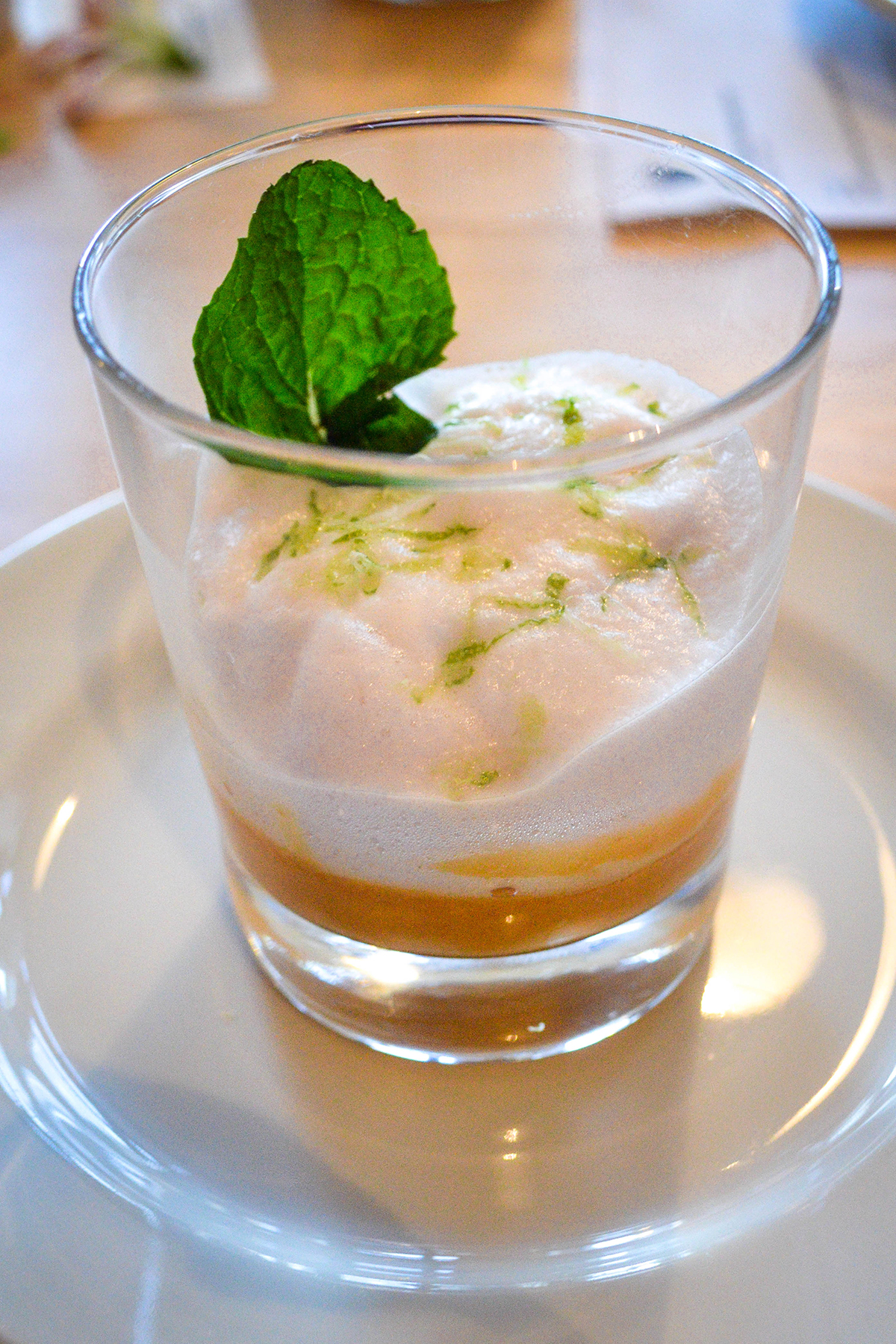 “Learning that I have autism makes a lot of sense,” Aburto says. “We tend to be picky eaters because of our senses—how food smells, how the texture is, the color, or how it’s presented.” While she still eats plain oatmeal nearly every day because of her hyperactive taste buds, she’s able to turn it off in order to focus on prepping dishes for others.

Opening a restaurant of her own one day isn’t completely off the table, but for now, she’s content hosting her pop-ups. Aburto says she enjoys the combined challenges of introducing patrons to Peruvian gastronomy while developing unique vegan twists. Should the opportunity to open a brick-and-mortar arise, she wants to run a small space, completely on her own feminist, punk, humanitarian terms.

“I want to make enough where I survive and then everything else I can [do to] help other people with,” she says. “That’s the kind of restaurant I would have. I don’t know how. I don’t have the specifics. And I could do other things, but I like cooking. I like helping out and these people [who] need the money. It just makes sense to me. That’s the kind of person that I am.”