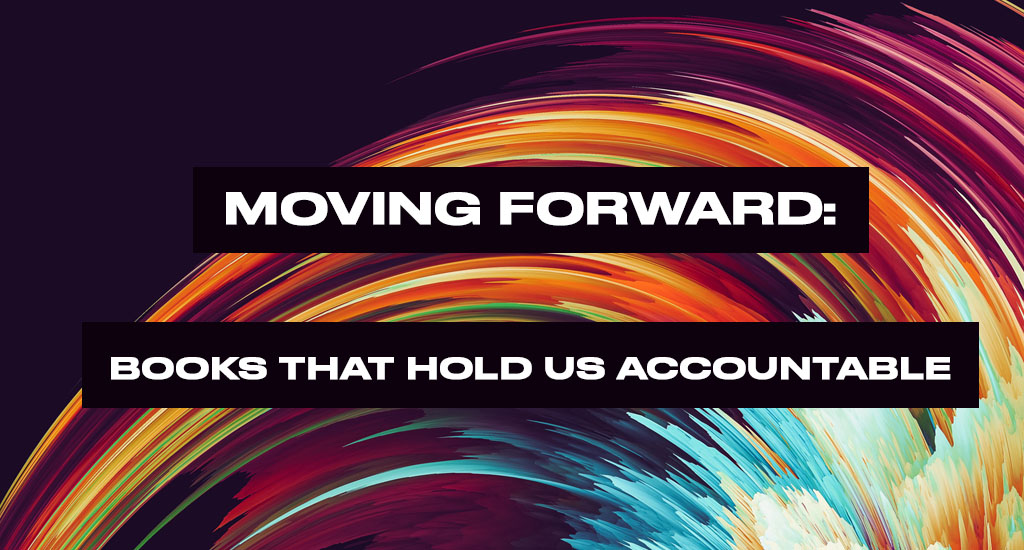 Moving Forward: Books That Hold Us Accountable with Lupita Aquino

During the election, I deeply empathized with the collective anxiety that many of us experienced as we sat in the unknown. It was an added stressor as we continued to grapple with an already difficult year. While #DoomScrolling—a term to describe the consumption of negative news on social media—with everyone else on the internet, I came across an Instagram story from Amanda Nelson, Executive Director of Demand Generation. It stopped me in my tracks. She asked her audience to channel the energy we were feeling into focusing on who we wanted to be after the election. That question stayed with me, and now that we know the final results, I find that I want to be like the authors below that continue to be hopeful while examining our past and holding our present accountable.

Just Us: An American Conversation by Claudia Rankine

This collection of essays and poems explores race and Rankine’s personal experience with confronting whiteness in all its forms—from white privilege to white fragility and white denial. Rankine pairs photographs, notes and other media sources with each essay to tie in how deeply embedded and central whiteness is to society’s past and present. Claudia Rankine was born in Kingston, Jamaica. She is an American poet that has published six collections of poetry, three plays and has co-edited several anthologies. Her collection, “Citizen: An American Lyric.” is one of my personal favorites. In 2016 she was awarded the MacArthur Genius Grant and utilized the grant to “explore whiteness, her questions for Lionel Shriver, and how an Ohio prison explodes the idea that blackness equals criminality” Rankine is also the co-founder of The Racial Imaginary Institute (TRII).

The Office of Historical Corrections: A Novella and Stories by Danielle Evans

The impact of personal history and specifically U.S. history is the ghost that haunts the characters throughout the six short stories and novella this book contains. Each story is an examination of how we carry our memories, how those memories impact us, and who can determine which memories become written history, even if the memories may be incorrect or undetermined. A sharp collection that spans over themes like race, grief, love and identity, is one that is as much unforgettable as it is haunting. Danielle Evans is a 2020 National Endowment for the Arts fellow and was named the National Book Foundation’s “3 under 35 Honoree” in 2011. Her work has appeared in magazines such as The Paris Review, American Short Fiction, The Sewanee Review, Phoebe and many more. “The Office of Historical Collections” is her second book. Her previous story collection is titled “Before You Suffocate Your Own Fool Self.”

Conditional Citizens: On Belonging in America by Laila Lalami

This collection of essays explores what it means to belong in America after becoming a naturalized citizen. It unveils the privileges of citizenship while also pointing at all the instabilities it creates for someone who doesn’t “look” American. Throughout this collection, Lalami details how she’s experienced discrimination in the U.S., as a Moroccan-American and Muslim woman, despite holding a U.S. passport. In the opening story, she shares that while going through customs at the airport with her husband, the border agent examining her newly obtained U.S. passport turned to her husband and asked him how many camels he traded in to get her. In sharing these experiences and examining the history of immigration in the U.S, Laila demonstrates how important it is for society to explore what one envisions when they hear the word “American.” Laila Lalami was born in Rabat, Morocco. She is the author of four novels: “The Other Americans,” The Moor’s Account,” “Secret Son,” and “Hope and Other Dangerous Pursuits.” “Conditional Citizens” is her first nonfiction book. Her essays and criticism have also appeared in the Los Angeles Times, the Washington Post, and The New York Times.

How to Slowly Kill Yourself and Others in America: Essays by Kiese Laymon

I was first introduced to Kiese Laymon’s writing through his 2018 memoir, “HEAVY.” Reading Laymon’s work allowed me to understand how the act of vulnerability could open doors for others, like myself, to begin a journey of healing. His vulnerability on each page made it so that I could make peace with unspoken truths I held but hadn’t faced. In this new edition of “How to Slowly Kill Yourself and Others in America,” Laymon uses 13 different essays to remind me of the power found in vulnerability. Not in how it can “save us,” but in how it can connect us. He covers a variety of subjects like family, race, music and more throughout the collection. Kiese Laymon was born and raised in Jackson, Mississippi. He is the founder of “The Catherine Coleman Literary Arts and Justice Initiative,” a program that focuses on getting kids and their parents from Mississippi comfortable with reading, writing, revising and sharing. He is the author of the novel “Long Division” and one of my all-time favorite memoirs – “Heavy.”

Good Talk: A Memoir in Conversations by Mira Jacob

“Good Talk” is a graphic memoir of complex conversations. It follows Jacobs as she documents conversations she has had with her family, friends, and even strangers to talk about politics, race, love and so much more. At the core of these conversations are questions from her son about the world and why things are the way they are. The illustrations that accompany these conversations bring them to life in a way words can’t capture. For me, it’s a book that invokes so many emotions, but mainly, a book in which I feel at home as a queer, Brown mother raising a Brown boy in America. Mira Jacob is a novelist, memoirist, illustrator and cultural critic. Her work has appeared in The New York Times Book Review, Tin House, Literary Hug, Vogue and other notable media outlets. Her novel “The Sleepwalker’s Guide to Dancing” was shortlisted for India’s Tata First Literature Award and named one of the best books of 2014 by Kirkus Reviews, The Boston Globe, Goodreads, Bustle and The Millions.

Truthsgiving: Bringing Truth to the Fabled Tradition of Thanksgiving

Breathe: A Poem by Jerry Ayodele