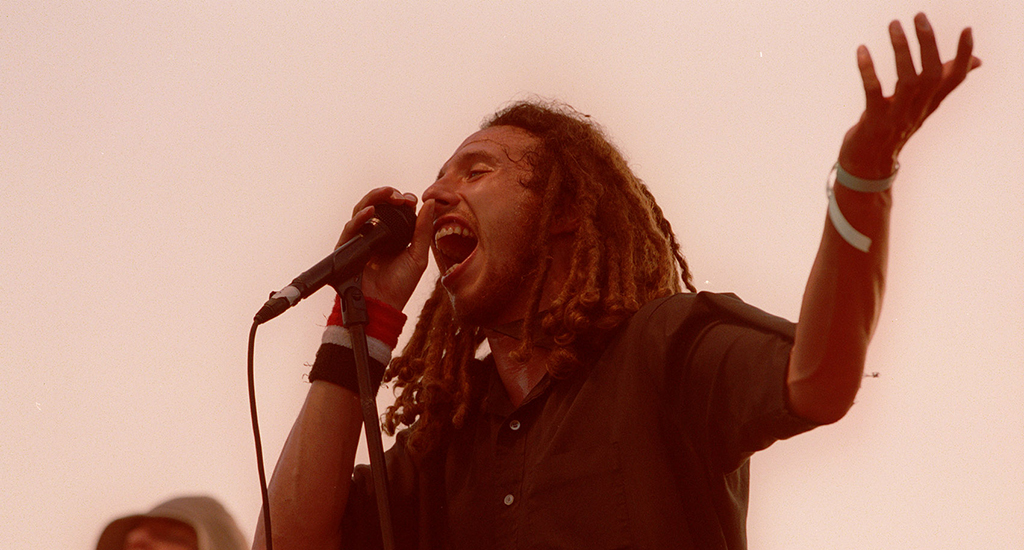 Above photo by Iris Schneider/Los Angeles Times via Getty Images

Open up Twitter on your phone right now and, within seconds, something political will hit your screen. Whether addressing border politics, reproductive rights, or economic disparity by race, chances are good that the messaging comes courtesy of one of your favorite musical artists, by retweet or by comment. Shared freely and vehemently over social media, such social justice stances have become more or less the norm with musicians today, egged on by their online fanbases.

That wasn’t the wave in the 1990s. With a Democratic president running the country for much of the decade, even the biggest bands in alternative music largely limited their public political involvement to benefit concerts, voter enrollment campaigns, and the spotty championing of a handful of personal causes. With AOL Online and Prodigy discs making for handy drink coasters nationwide, the nascent Internet lacked the adoption rates and high speed potency necessary for artists to serve as change agents there. Their interviews in major music or pop culture magazines sometimes gave voice to issues of import, but rarely with the same frequency as more superficial concerns.

Conversely, Rage Against The Machine were full throated with their stances. The Los Angeles rap rock quartet arrived with a proverbial bang in 1992 with the unflinchingly direct single “Killing In The Name” taken from their eponymous full-length debut from the same year. Sociopolitically volatile like the rest of the album’s cuts including “Bombtrack” and “Freedom,” that track proved a signature tune with its mix of heavy riffs, resistance lyricism, and an anthemic refrain delivered by vocalist Zack De La Rocha. Over the next eight years, the band would release two additional albums of original material and a covers compilation before breaking up in 2000.

One need not venture very far back through De La Rocha’s bloodline to encounter revolutionary greatness. A core member of the collective Los Four, his father Robert “Beto” De La Rocha played a vital role in popularizing Chicano art in the 1970s. A young veteran of the Orange County hardcore punk community, the younger De La Rocha had previously fronted Inside Out, a group with members that later founded or played in bands including 108 and Alien Ant Farm. On their sole Revelation Records outing No Spiritual Surrender, his outspoken style jibed well with the oft dogmatic approach of bands in that scene, and carried over well to his next and more famous project. 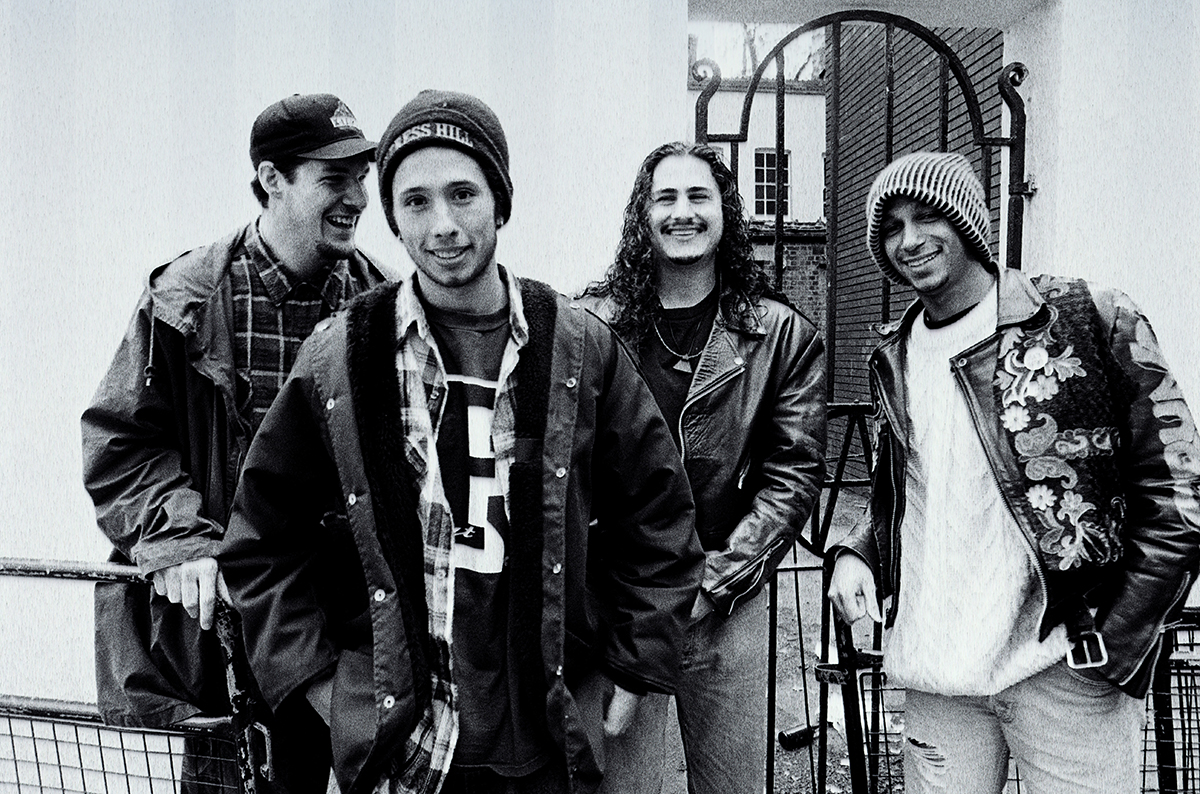 Apart from its incendiary music, what made Rage such a formidable band was a commitment to using their platform for activism from the get-go. In song and in practice, they advocated for the release of political prisoners Mumia Abu-Jamal and Leonard Peltier, that invocation foreshadowing the rallying tactics employed by later popular movements like Black Lives Matter. At concerts, they had tables set up with literature from leftist organizations, raising awareness of issues not just in the United States but in Latin America. Their imagery adopted the likes of Che Guevara and the Zapatistas, the latter no doubt informed by De La Rocha’s Chicano identity.

Though sometimes perceived as antics by outsiders and cynics, direct action played a critical role in how the band existed outside of the studio recordings. On Saturday Night Live, the same program that televised Sinead O’Connor’s ripping of Pope John Paul II’s photo less than four years prior, essentially courted controversy again by having Rage as the musical guests for an April 1996 show hosted by Republican primary contender Steve Forbes. Before their first number, “Bulls On Parade,” the band had hung an upside-down American flags on the amplifiers behind them as a form of protest. SNL staffers removed them just prior to the aired live performance, and Rage were not permitted to perform their planned second song. With the help of activist/director Michael Moore, their music video for “Sleep Now In The Fire” turned into a full-on Wall Street shutdown as the band played uninvited on the steps of the New York Stock Exchange.

The end of Rage came seemingly by the unilateral decision of De La Rocha, who issued a departing statement in October 2000 that unsubtly called into question the integrity of the unit. In it, he declared:

“I feel that it is now necessary to leave Rage because our decision-making process has completely failed… It is no longer meeting the aspirations of all four of us collectively as a band, and from my perspective, has undermined our artistic and political ideal.”

While the remaining members subsequently replaced their vocalist with Soundgarden’s Chris Cornell and rebranded as the more radio-friendly hard rock outfit Audioslave, De La Rocha essentially went dark. A highly-anticipated solo rap album from him amounted to little more than rumors, the sort of speculative content that music publications would revisit every so often with even the most specious evidence of its existence. Most assumed he was continuing his activism outside of the public spotlight and hoped for a Rage reunion, which occurred in 2007 and continued into the following year including both festival gigs and protest shows around the Democratic and Republican National Convention gatherings alike.

Much like Zack, who has largely spent the post-Rage years out of the spotlight, his father Beto too drew back from public life at the height of his fame, albeit in a more extreme manner. He spent some twenty years in relative isolation, a self-imposed exile at his own father’s home in Los Angeles’ Lincoln Heights neighborhood that compelled him to reject the art world wholesale and immerse himself in scripture. During this time, he divorced his wife, committed to an ascetic lifestyle and, in light of his newfound religious beliefs, destroyed countless pieces of his own work, at least once with his young son’s reluctant assistance. In the 1990s, Beto returned to creating art at a time when Rage’s charged music was reaching the eager ears of millions.

One clear exception to De La Rocha’s recording void came in the summer of 2008, roughly towards the end of the Rage reunion gigs, with the release of “Wild International.” Credited to One Day As A Lion, the track introduced his project with Jon Theodore of prog rockers The Mars Volta with the same vitriol of his prior work. Though not a guitar-driven record, the following self-titled EP delivered fury all the same with keyboards, drums, and that same unmistakable voice. Within a couple of years, the live appearances with both groups ceased. A proper One Day As A Lion album never materialized.

Other than a few guest appearances here and there, including with indie rap duo Run The Jewels, De La Rocha has returned to his seeming sabbatical in the music world. According to Tom Morello, the second most-visible member of Rage, he declined to participate in Prophets Of Rage, a supergroup featuring Chuck D of Public Enemy and B-Real of Cypress Hill. De La Rocha’s reasoning may remain unknown to the public, but his pioneering legacy in the mixing of leftist politics and music will never stop.