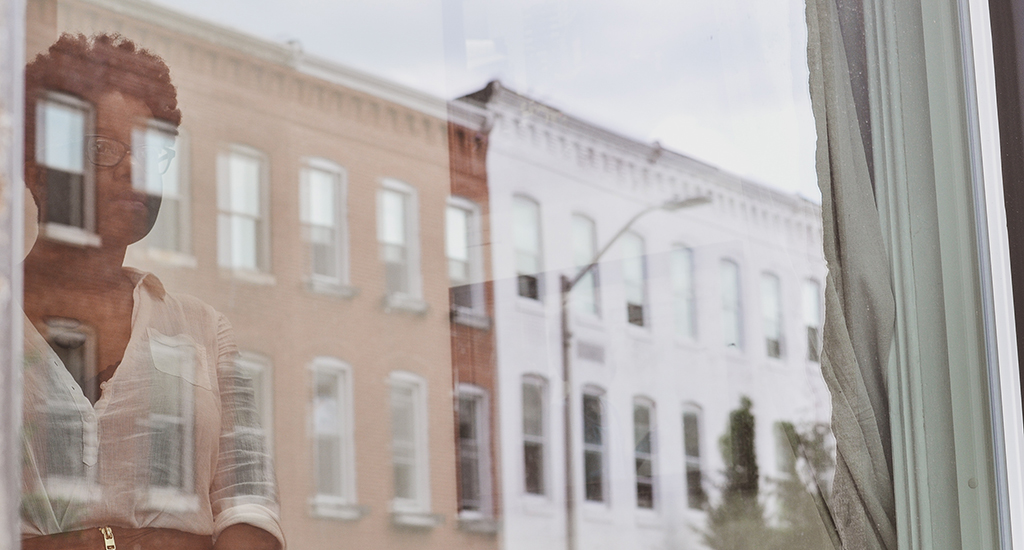 All photos by Ana Paula Teixeira

Drapetomania is what best describes multidisciplinary artist Nia Hampton’s recurring need to leave Baltimore—more than wanderlust, more than escapism, more than any other word. The word previously used to describe the unequivocally racist medical diagnosis known as “runaway slave syndrome” around its 1850s creation, carries new—but related—meaning with Hampton.

“I was never necessarily forced to go anywhere,” she notes. “But I think migrancy is a real black issue, and I think not enough black Americans are connected to that.” 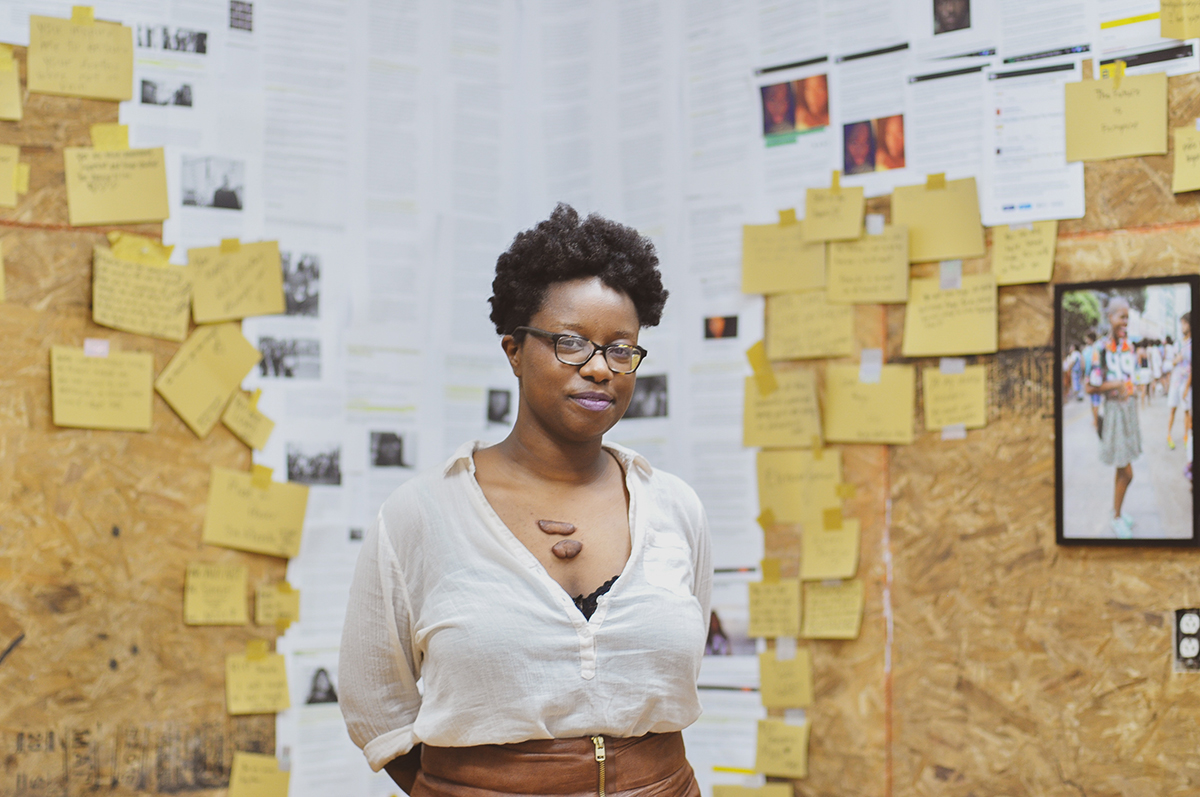 Her first solo exhibit, Drapetomania: A Strong Urge to Escape, marked the inaugural event at Waller Gallery, a new black-owned art space in the Charles Village neighborhood of Baltimore. It ran from April 13 through May 26, and bore reflections on why she’s compelled to travel, and what she’s learned in the process—about herself, black culture in the global diaspora, and how it all relates to the city where she was born and raised.

The event was “a long time coming,” Hampton says. Photographs and video footage collected during time spent in South America, Ecuador, Bahia, Brazil, and Colombia provided a generous database for the show. It was also an extension of her blog, Glowing Pain. Hampton has been cataloging her experiences there for years through imagery, poetry, and honest, documentary-style prose revealing incisive societal and cultural connections. 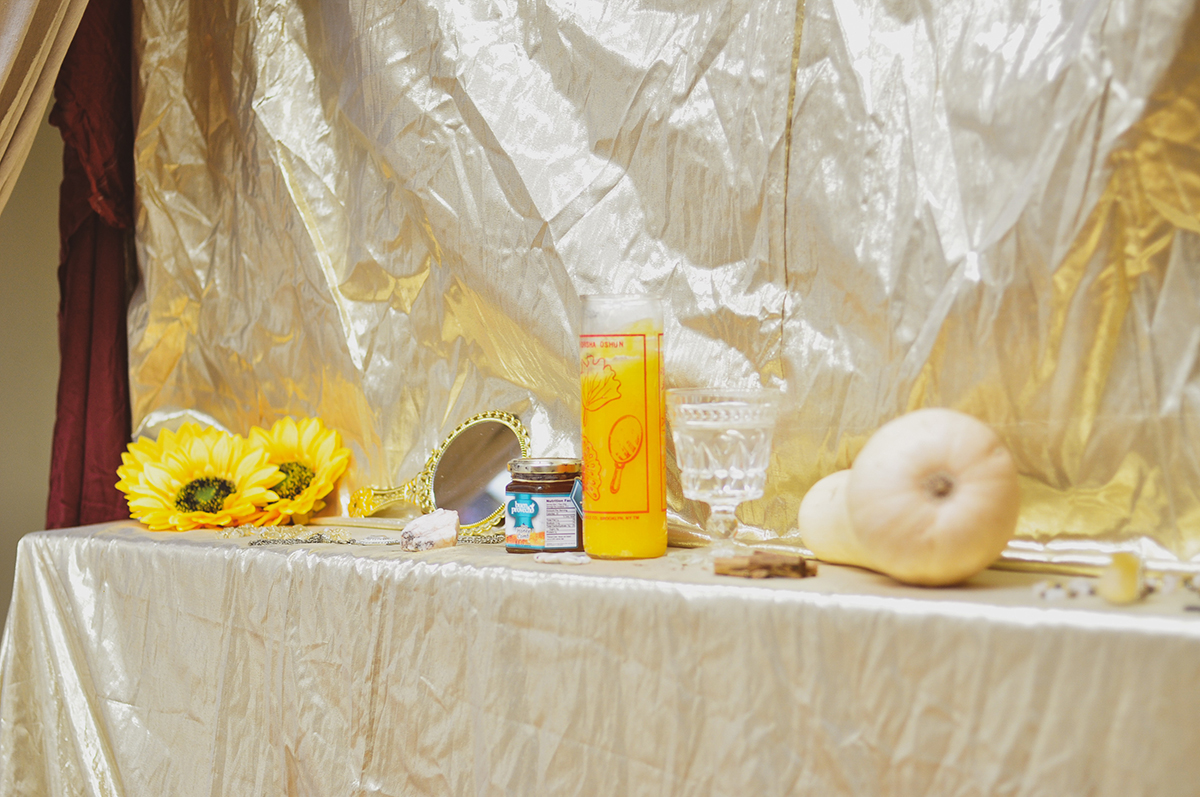 Whenever Hampton travels, she always finds the black communities. She wants to know “where the hood is,” too. “Even if I’m not going in and walking into it, I need to know where it is, proximity wise, for me to feel comfortable,” she says. And ultimately, Hampton wants to see every port of the transatlantic slave trade.

In August of 2015, she recalled her arrival in Salvador a year earlier, during ongoing protests in Baltimore in response to the shooting of Michael Brown in Ferguson, Mississippi, by a white police officer. “During that week,” she wrote, “Baltimore was Salvador, Salvador was Baltimore.”

Salvador, among Brazil’s poorest cities, was the first slave port in the Americas, and remains a largely Afro-Brazilian community. Like Baltimore, it has “a reputation of being crime ridden,” Hampton explained, lacks quality public education, has a high murder rate, is rampant with poverty. And in Salvador, “Police can empty clips into black flesh without second thought.” 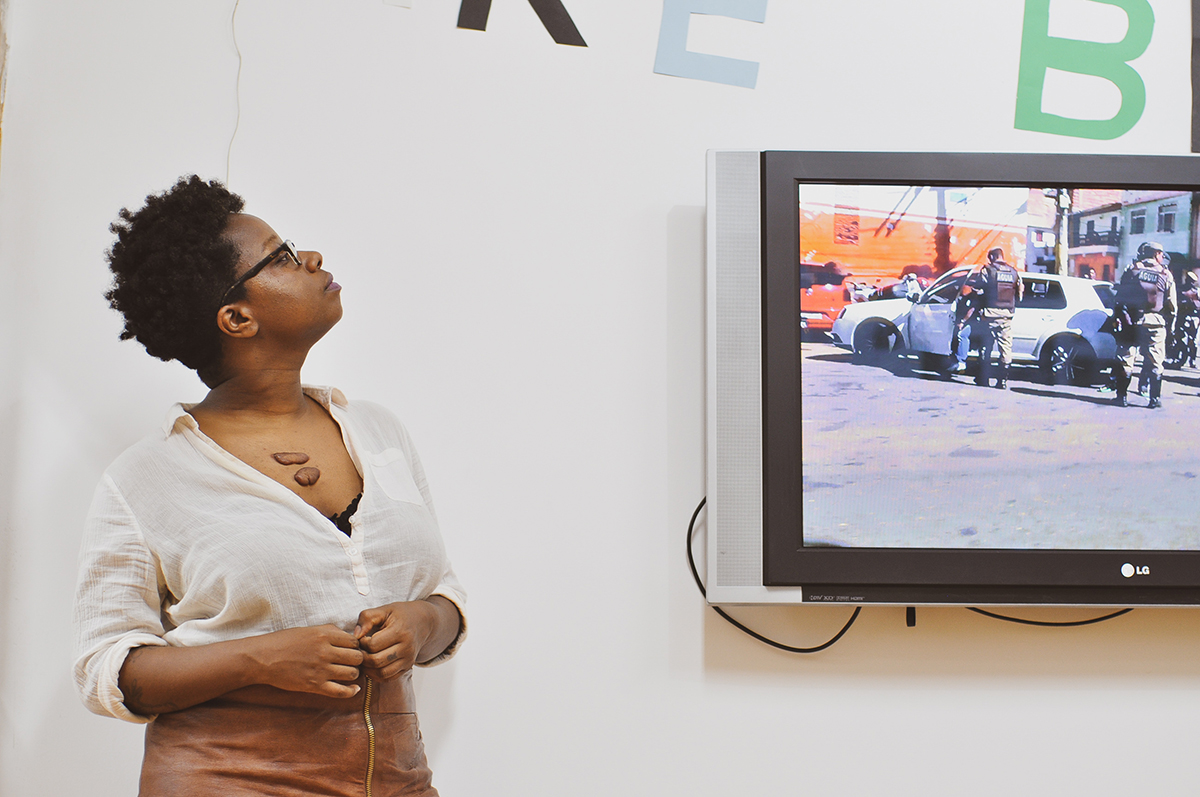 The community in Salvador had stood in solidarity with Americans, she remembered. Earlier, in April, Freddie Gray had died of injuries inflicted while in police custody, and now, she noted, there was a public mural dedicated to both Brown and Gray in the neighborhood of Barbalho, Salvador.

Drapetomania was a way to connect the dots between places like Salvador and Baltimore, where descendants of the same Afro-Latinidad diaspora share the same suffering and resistance.

“I needed to create something to kind of give people the experience, because it’s not anything that I can explain,” she says. “You can’t just explain it as if it was a vacation, because it was my life.” 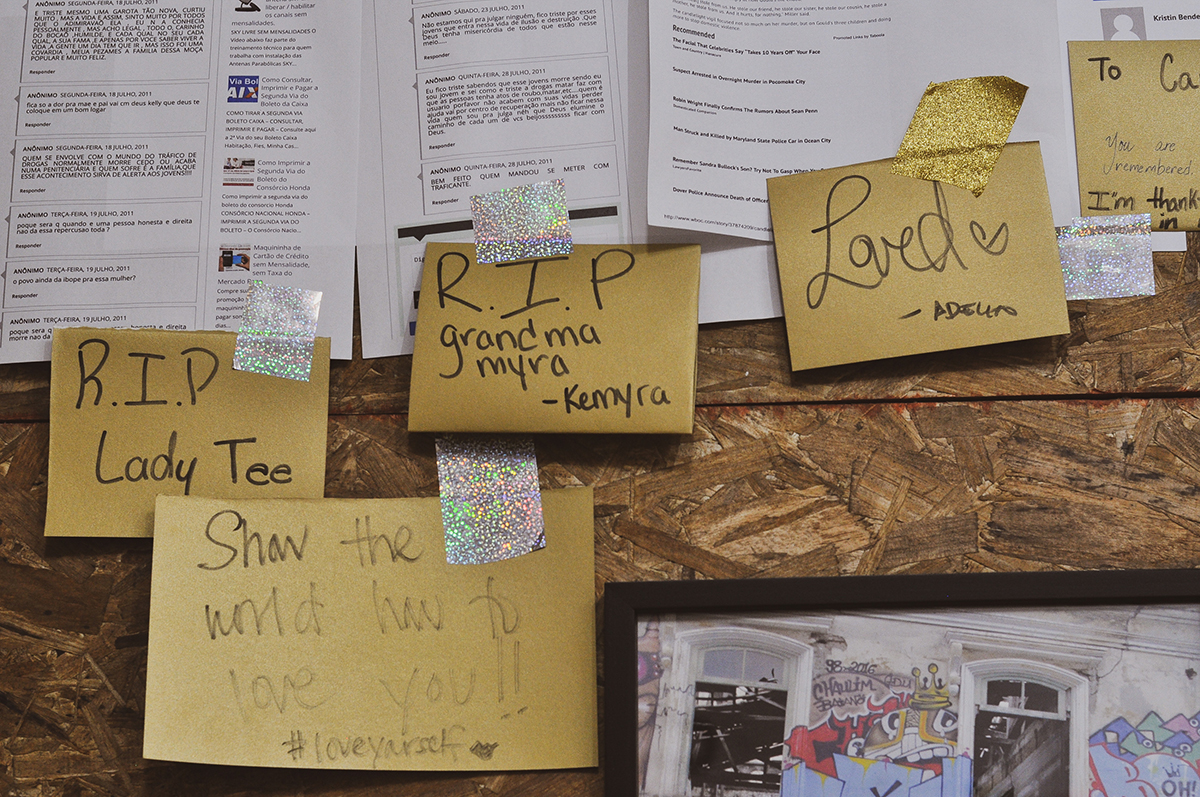 Police violence in Brazil was documented in the exhibit, as was femicide—the latter with a moving, collaborative installation where guests left “love notes” for the women memorialized there. An entire room was dedicated to Salvador’s Marcha do Empoderamento Crespo, “which is kind of like a curly hair, nappy hair empowerment march,” Hampton explains, that is “also calling for the end of the extermination of black youth.”

Back when she was studying at the University of Maryland, Baltimore County, the stories of first and second-generation students resonated with Hampton—in hindsight. Hesitant to identify initially, during her travels, seeing her community in the global diaspora, what they’d expressed – “conflicted feelings of where home is and where you belong”—began to reverberate.

“We definitely kind of forget that most of us got to these northern cities through force, through running away, because we couldn’t get jobs, because we were burned down and literally chased out of places,” she says. “So for me, [the term] drapetomania is kind of calling on that. I don’t want us to forget how we got here, and not only the slave trade, but literal regionally in the states, how black people came from South Carolina and Florida and escaped the southeast coast in general to be living in the various places they live.”

Hampton had also felt trapped by her immediate reality in Baltimore, she says. “I got really obsessed with what I thought could be freedom, or just a very different place. Ultimately, I would find out that anti-blackness is global, and freedom is a state of mind, and all these other things,” she says. 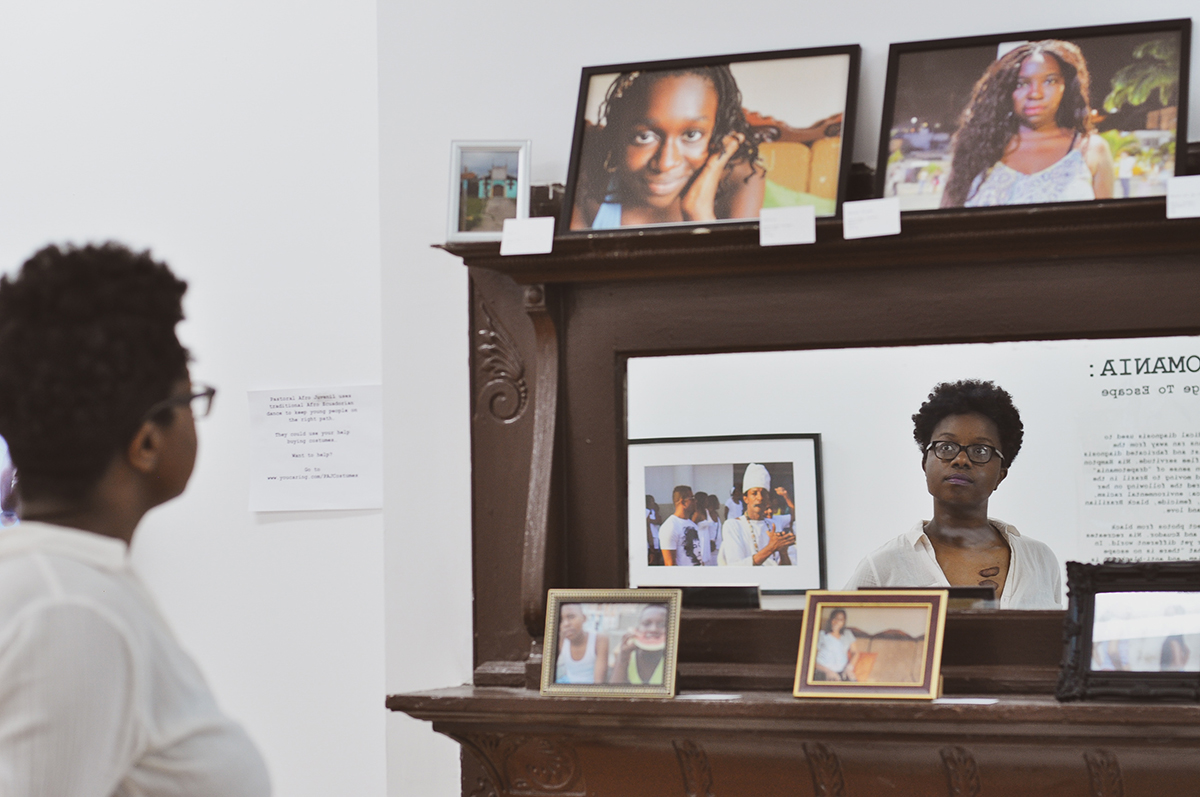 There was happiness in Drapetomania, too. Haircut culture in Cali, Colombia, was showcased; in the newsletter that accompanies the exhibit, Hampton explains its importance in community-building and, for the barbers, a creative outlet that also provides for their families. African spirituality was celebrated in an altar for Oshun, the Yoruba orisha (or deity). Teach the Kids spotlighted in video the Pastoral Afro Juvenil, “a community group that uses dance to teach history and self-confidence to Afro-Ecuadorian youth.” (Hampton is currently raising funds for their future competitions.)

Brazilians maintain a certain alegría (joy) even in resistance, Hampton says. This isn’t the right approach for everyone, she knows, but it’s something she personally appreciates. 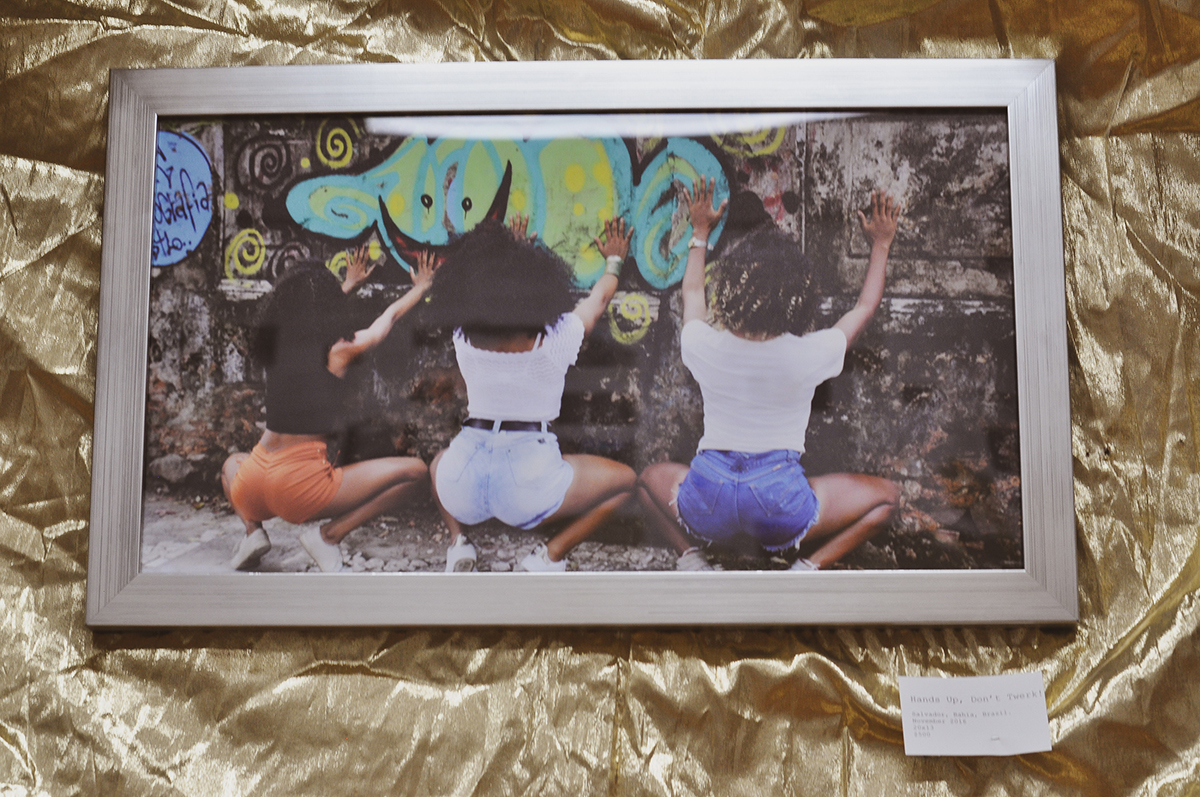 “I think we get burnt out [in doing] so much race work, and militancy, that it actually kills us. And I think that’s where we are as a community, with self-care and taking time and realizing that it’s coming from all levels,” she says. “But that you really need to hold space for yourself, and be happy sometimes just to be able to live to fight another day.”

For Hampton, she finds her alegría in traveling, in meeting and learning from black communities throughout the world. Her love of her hometown isn’t diminished by this; she is proud to be from Baltimore. And with Drapetomania, she’s given her city a beautiful gift.