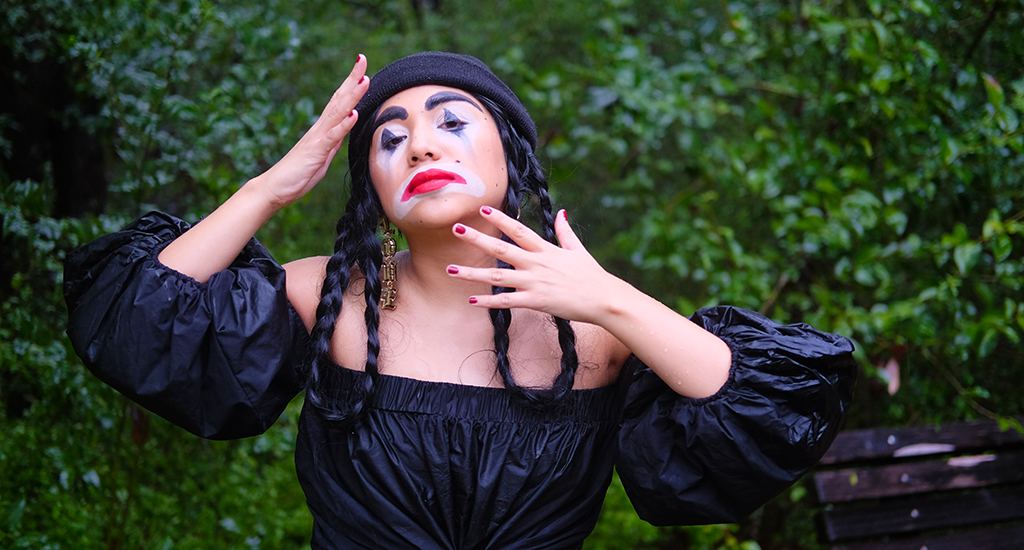 Payasa with a Purpose: Andie Flores Brings Latinx Visibility to Sketch Comedy and Beyond

All photos courtesy of Andie Flores. Above: Photo by Ivan Alonso

Andie Flores learned the importance of cultural representation in media early on. Growing up in San Antonio, she wanted to make her mother laugh the same way sketch comedies like SNL and Mad TV did. At the same time, her father was showing her how Latinx people were portrayed on the small screen—if at all.

Today, at 27 years old, Flores is making uniquely self-aware comedic art as a writer and performer. Her first web series, slated for online debut this summer, is called Muy Excited and follows a character bearing the same name, with many comparable experiences: Andie has just moved to Austin and, through a group of new friends, learns firsthand how gentrification affects the city’s people of color. 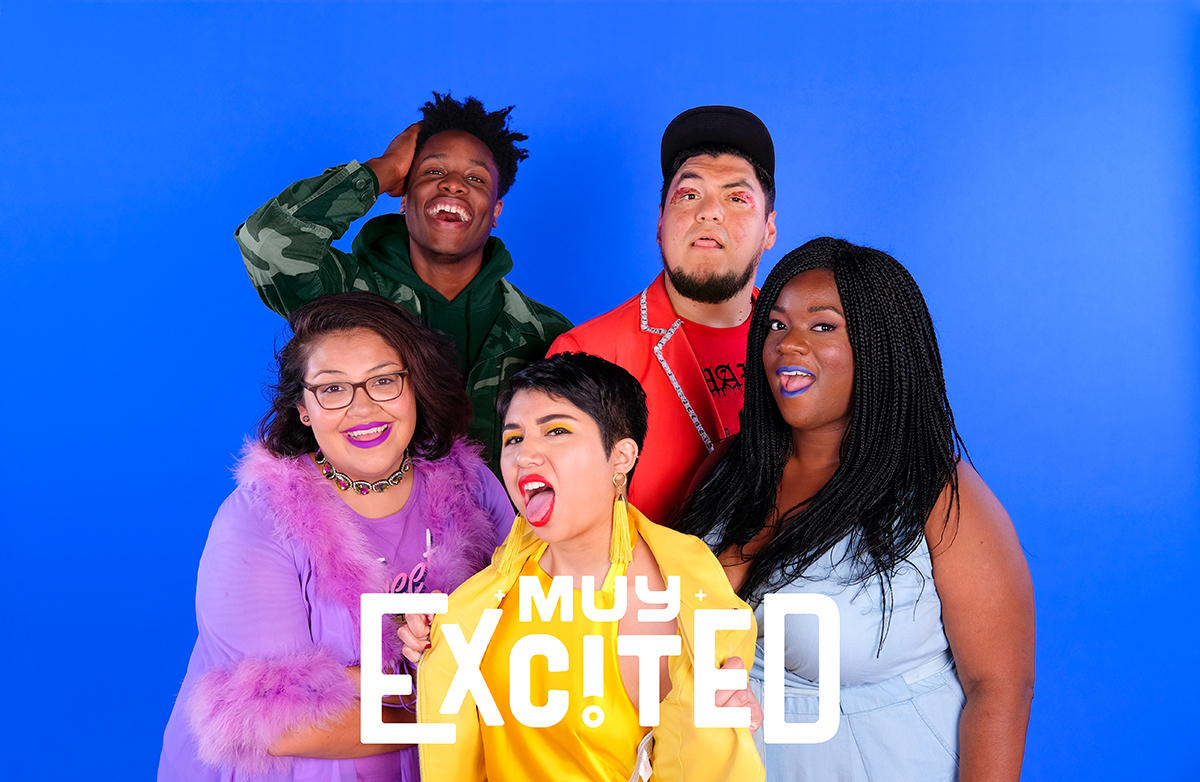 “Austin has always been hailed as this site of experimental, artistic, creative expression, where everyone is free to be super weird,” she says. “But so many things, so many theaters, so many programs, just in the last year-and-a-half, have been [affected].

“There’s just so many different, unique millennial-like ways in which someone can really hurt your feelings as a person of color. I think with the web series, I didn’t want it to be punching in this theme of like, I don’t feel welcome here, and I’m letting you know about it,” she says. “It’s just the very subtle ways different people of color can feel discriminated against, or unwelcome.”

The humor in Flores’ work grows from this place of awareness; she’s not one for offensive comedy, and never stoops to cheap-shots. She’s witty, intertwining social commentary and references to Latinx culture with ease.

In a bit for the sketch comedy series Doper Than Dope, which ran for two sold-out seasons in Austin starting in 2015, she plays a child whose “Super Mujer” doll possesses a magical cleaning power—like her mom, who cleans the homes of well-to-do families. Confronted with a white doll with a corporate executive mother, Flores’ character proudly challenges that wealth with the richness of Latinx culture, and the crowd roars with laughter.

The consciousness of her comedy, however, is sometimes less obvious than her work there or as writer and director of Muy Excited. About a year or two into living in Austin, Flores started a one-of-a-kind photo project after receiving a Facebook message from artist and stylist Cynthia Muñoz asking if she wanted to be friends.

“I was like, oh, I’m really flattered! This is cool,” Flores says. “It took us a while of talking and texting a lot, and then the first time we hung out,” Flores says. “She was like, there’s this weird ditch by my house… I really wanna take pictures there but I never go by myself because I’m too scared to go by myself.” 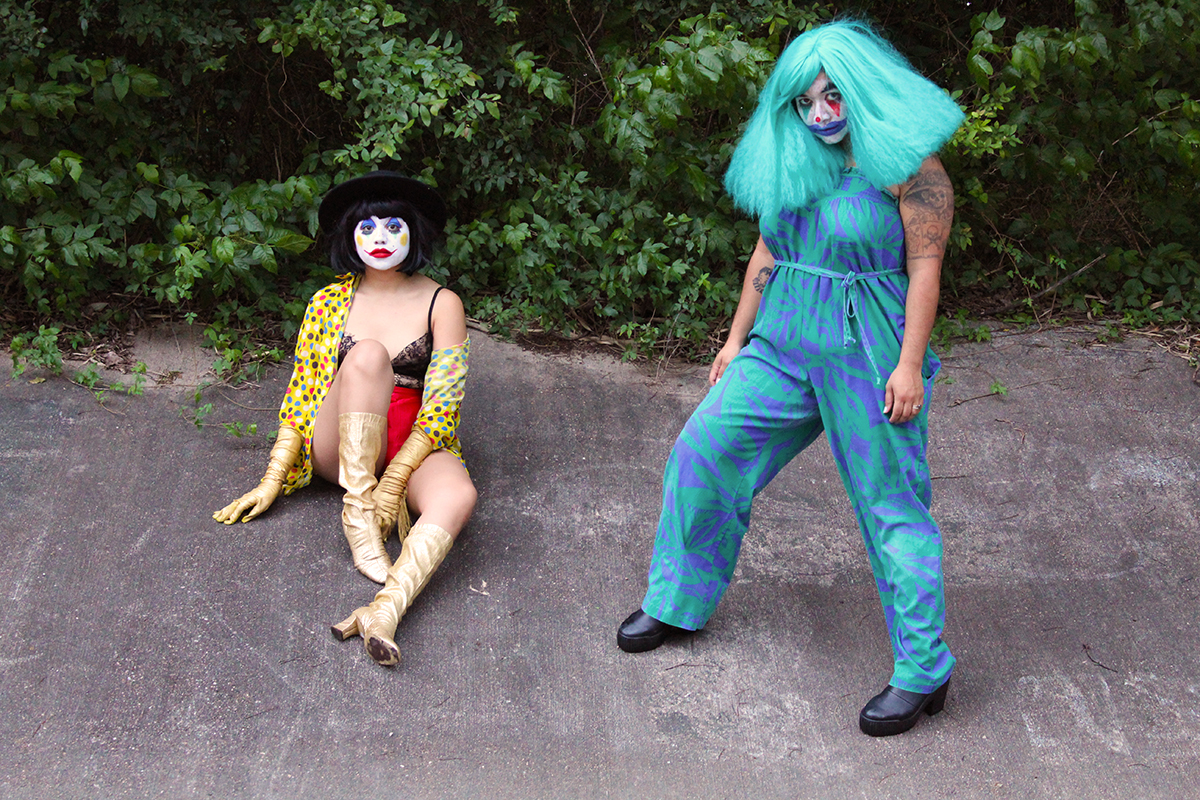 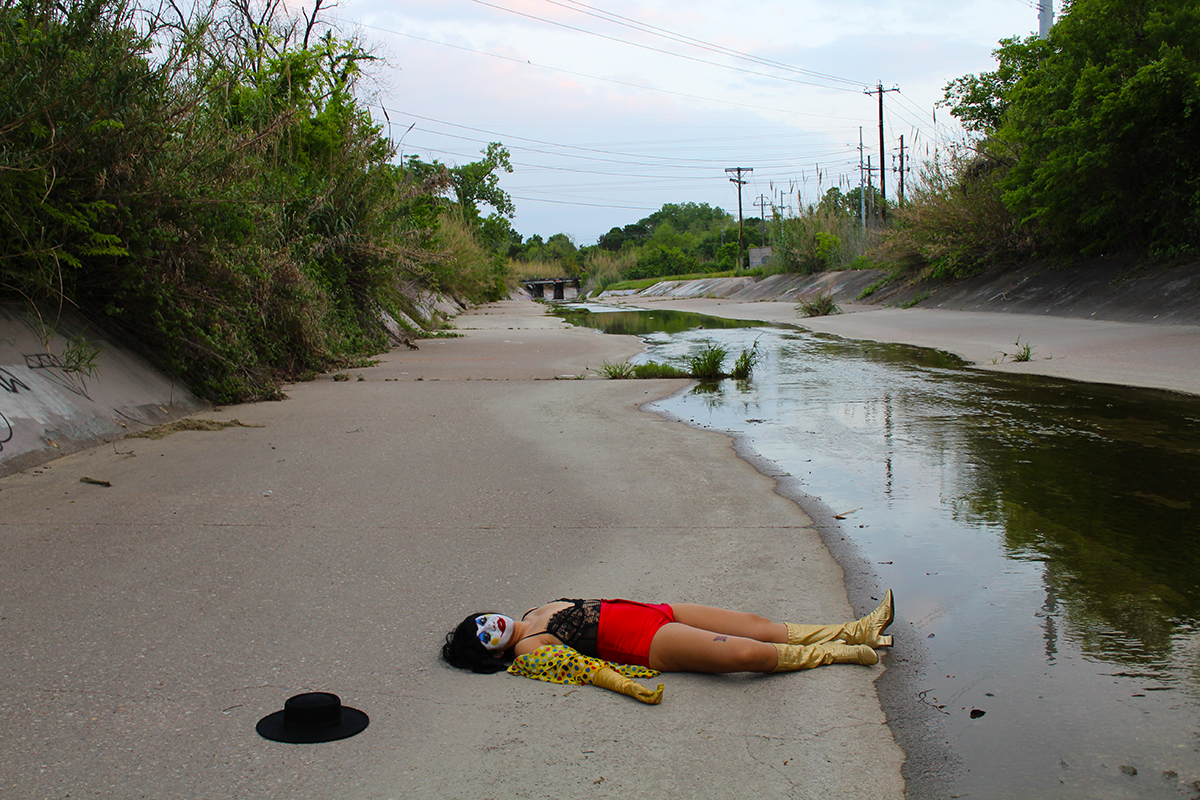 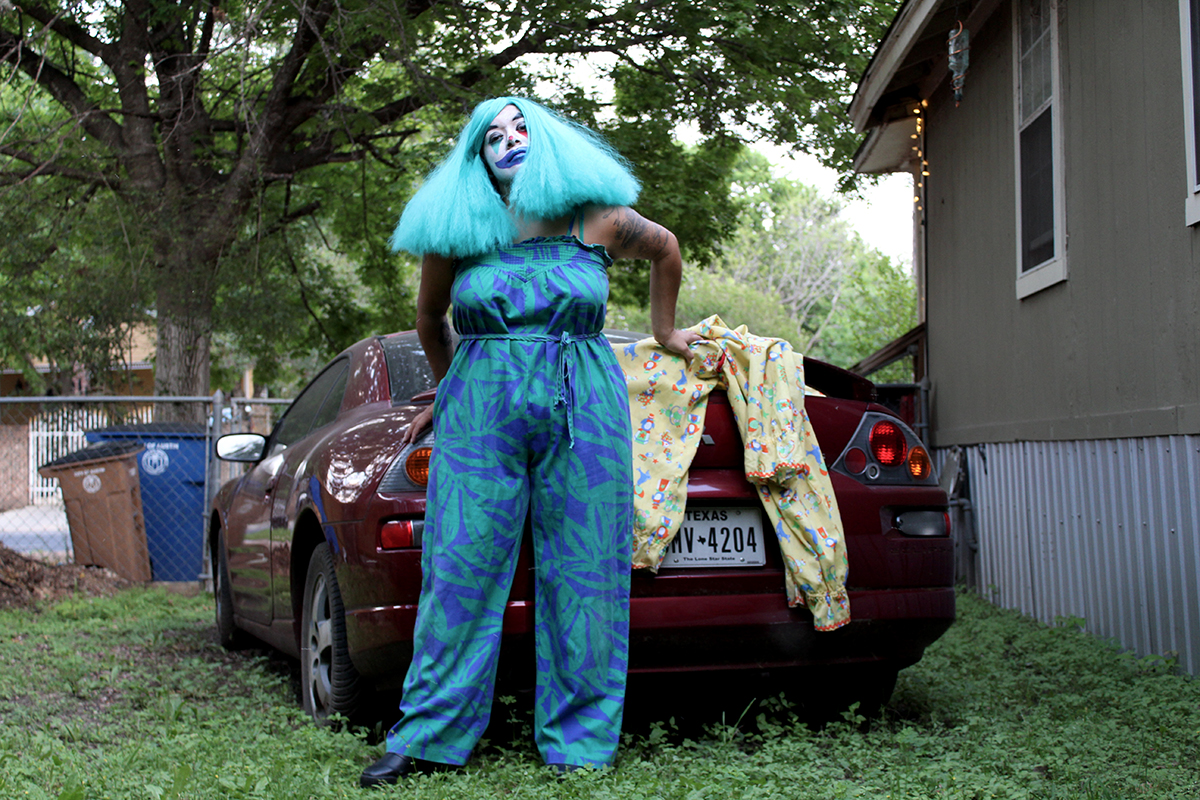 From there, the Payasa photo project was born: Flores and Muñoz dressed as clowns, posing outdoors, in public spaces, or in portrait-style setups. It’s an ongoing series with no end in sight—they’re currently working on more clown creations.

Flores connects the project to her middle school group of “strange” girlfriends, remembering how they’d take “weird and grotesque” digital camera shots they thought were funny, then post them to Myspace and wait for the reactions. In part, unknowingly or not, they were challenging the male gaze. Payasa subverts viewer expectation in a similar way: These images of Flores and Muñoz don’t cater to standards of beauty by any stretch, or even societal norms. 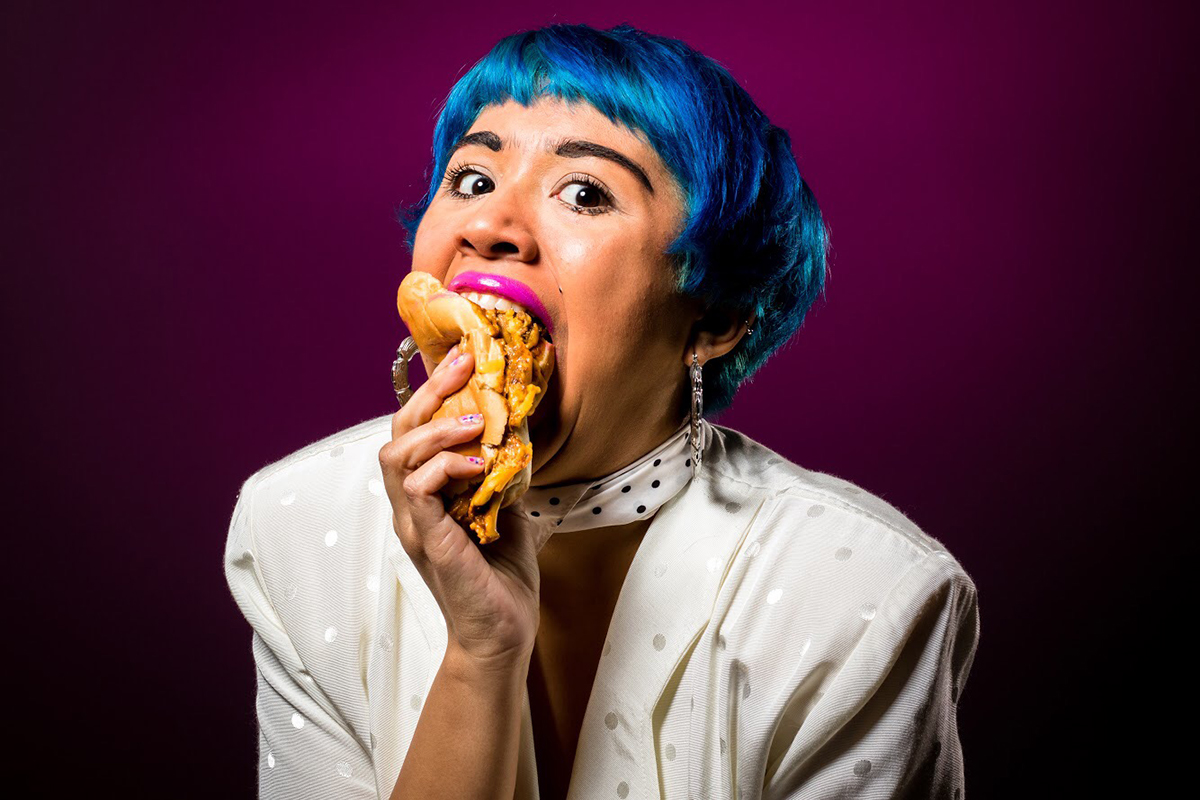 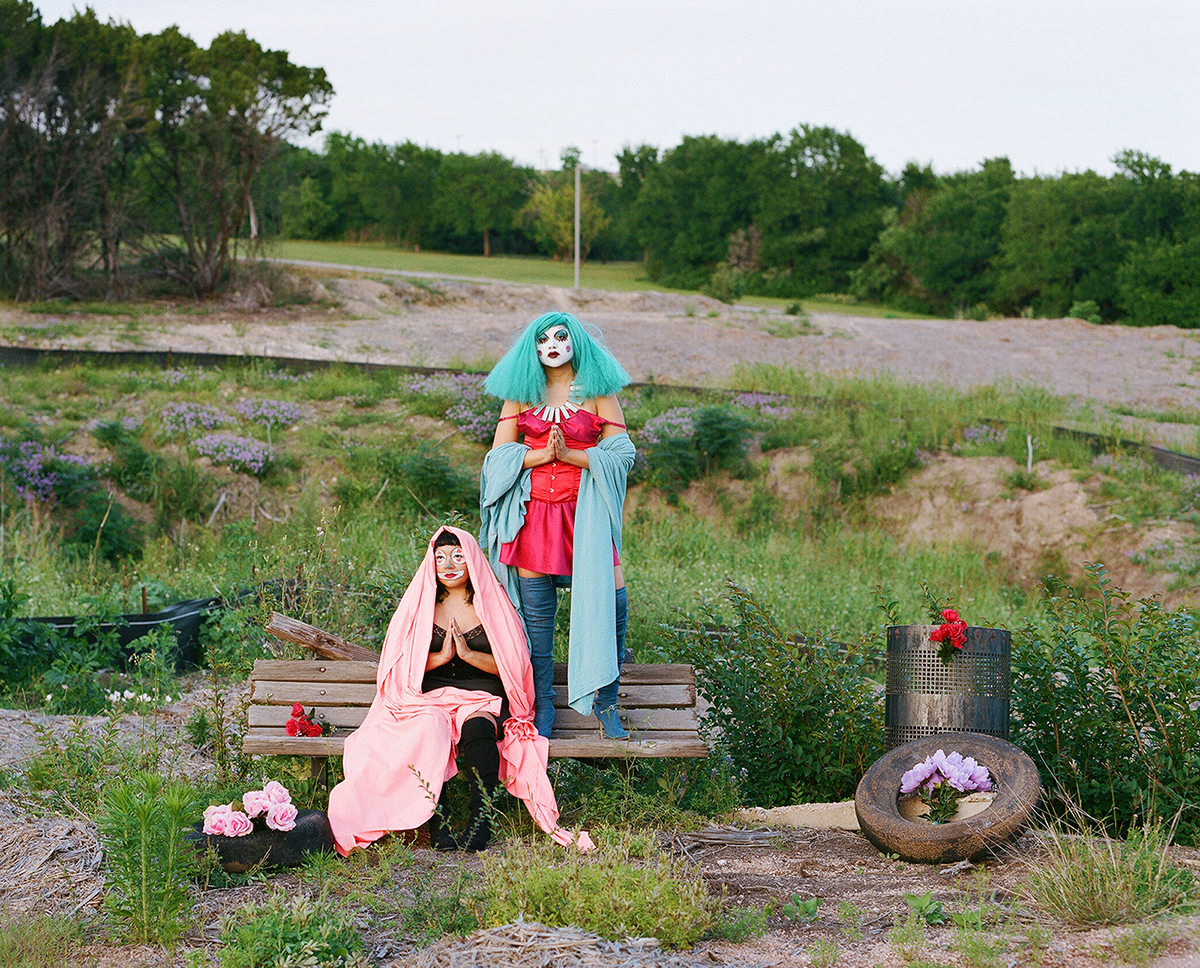 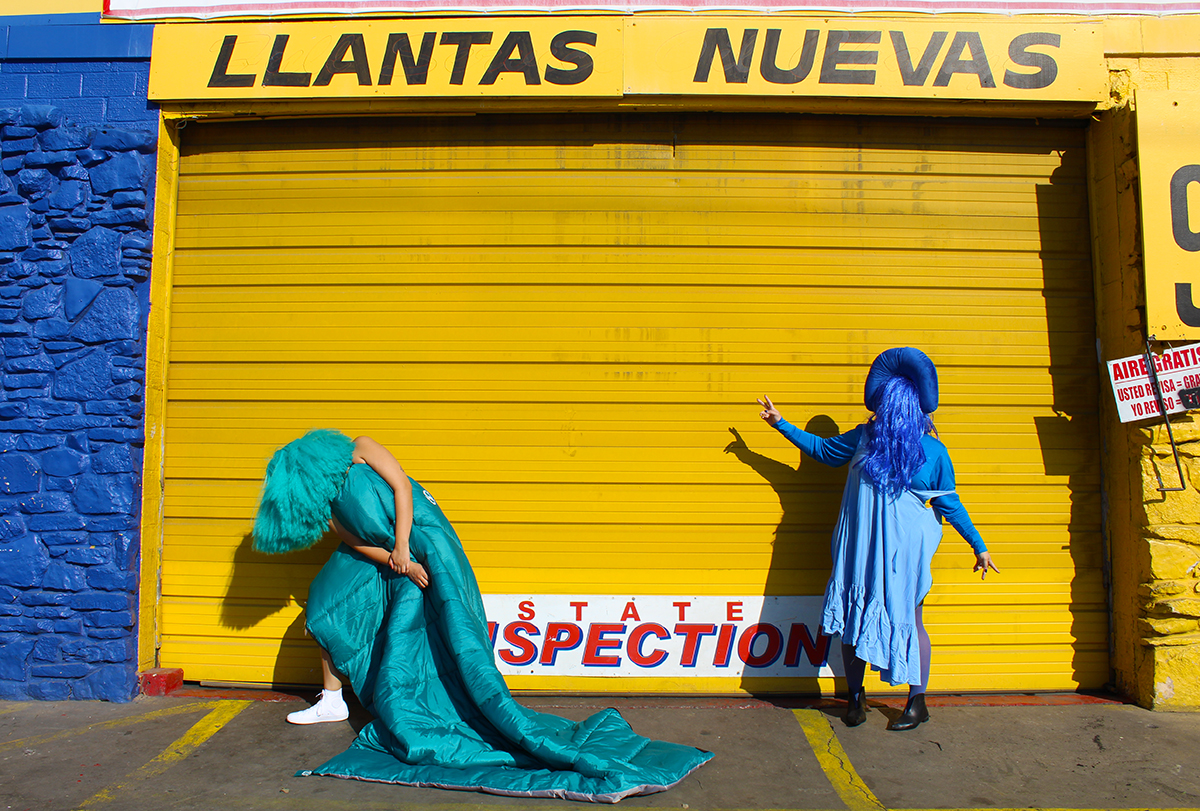 All of Flores’ creative output is filtered through that lens that first began taking shape when she was a child, watching sketch comedies with her mother—hoping one day she’d be a funny performer too, but acutely aware of what it means to be a Latinx performer through her father’s suggestive teaching.

“For me, the main reason I wanted to perform in the first place was just because there was huge lack of representation. I didn’t have people to look up to,” Flores says.

For younger generations, Flores is that person—the one she didn’t see growing up. Not only does Flores represent for Latinx people, but her keen wit in relaying the experiences and realities of people of color in performances are cues that inspire critical thought for all viewers—while also making them laugh.