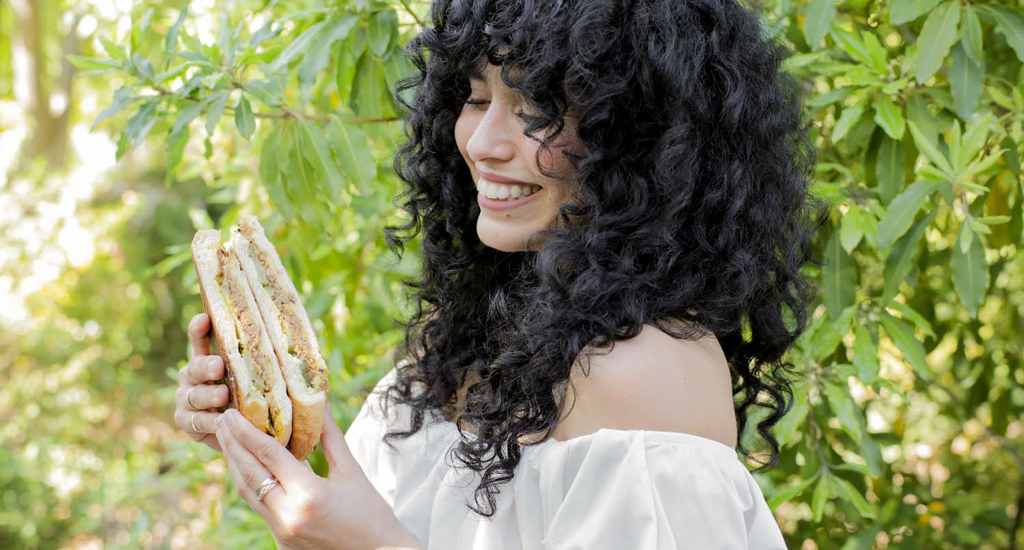 Evanice Holz always looked forward to weekends at her grandmother’s house. She still remembers the comforting memory of watching as her grandmother sat back in her rocking chair and shredded bistec for ropa vieja—a traditional Cuban dish—all while she balanced a phone against her ear and chatted with her girlfriends.

This blend of sounds, visuals and smells is still ingrained in Holz’s memory and reminds her of these intimate moments in the kitchen—the place where she was able to connect back to her Cuban roots.

“Love is food, food is love, and that’s what you’re being served, and there’s never a question about it,” said Holz. “I think my warmest memories are definitely surrounded with food because in a Latinx household and in a Cuban household, they will feed you a million times, and that’s just [their] way of showing their affection and showing their love.”

Holz is cultivating her own community and is allowing other plant-based Cubans like herself to reconnect with their favorite childhood recipes in a new way. The Cuban and Brazilian-American is the owner and chef behind Señoreata—a vegan Cuban catering company that has become popular at outdoor marketplaces like Highland Park’s York Boulevard and Downtown Los Angeles’s Smorgasburg—and whose name quickly catches your eye.

“I think Señoreata is like a coming of age, young Latinx woman. [A] Latinx woman who loves to eat and I love a good pun. And I think that’s how Señoreata came about. I was researching all these different things. And then all of a sudden it just came to me. It was really simple and it felt authentic. It felt like me, it felt like I was pushing my own narrative.”

Ironically, Holz did not grow up with a love for cooking. She loved being in the kitchen with her family members but more as an observer and a taste tester. It wasn’t until she became a vegetarian in high school that she was forced to start experimenting in the kitchen.

“I first went vegetarian when I was 15. I went vegan when I was 18 or 19, so that was like a couple to a few years of not eating my grandma’s or my father’s food. It was a lot of frozen stir-fries in a pan and watery as hell veggies. It was not cute,” she laughed. “I wanted to make sure that every meal was a well-balanced meal, so I had to learn how to cook.”

Holz soon found herself recreating and adapting Cuban dishes into vegan-friendly options through trial and error and her father’s picadillo recipe.

“[Picadillo] was one of my favorite dishes growing up and is like a heavily repurposed ground meat. In Cuban cuisine, you can make potato balls with it. You can make pastelitos with it. You can have a meal with it, with rice and beans, it’s everything. And I finally learned how to make that with some soy-like meat, and suddenly, voila, I’m eating my childhood food again.”

Her dishes evolved from a plant-based picadillo to vegan pastelitos, cubanos, potato balls, plantain nachos and more. Holz later found herself in culinary school, where she mastered this new love of cooking and set her sights on one day owning a space of her own.

She was inspired by the vast array of independent vegan chefs that would set up alongside Highland Park’s York Boulevard—a busy marketplace full of Latinx vegan-friendly dishes. Holz realized that she could open up her own pop-up stand and introduce the young, Latinx food scene to her plant-based Cuban recipes. When retelling the story of Señoreata’s origins, Holz credits the original York Boulevard pop-up community for her business’s growth.

“I owe a lot to that group. We’re able to help each other business-wise like; how much did that cost? Or like, where are you getting your serving trays from? Little things like that. We are plant-based, we are independent chefs and we’re also street food, which is such a big part of Los Angeles culture. How do we support each other and lift each other up? And I think that’s what I’m most grateful for being a part of that community.”

She began cooking her dishes at home with her father in a tiny studio apartment kitchen and would sell her dishes to the mass crowds that would flood the boulevard. Soon, she found herself catering large events around the city for big companies like Netflix, Google, Adidas and more. Señoreata was booked and busy until 2020 when the COVID-19 pandemic hit, and businesses were forced to reimagine what it looked like to serve their clientele. Now, Holz offers special order catering through Instagram and her website. She also offers weekly food pickups every Saturday in Atwater Village and Fridays in Yucca Valley.

Vegan food and plant-based lifestyles are often associated with wealth and seen as inaccessible to lower-income communities. Holz wants to show individuals that they don’t have to spend outside of their budget to venture into more plant-based options.

“I want anyone anywhere to be able to make what I can make. I don’t want you to have to go to Whole Foods or Erewhon or Trader Joe’s to get one certain ingredient.”

Holz’s goal is to educate those around her on what it means to eat sustainably while still enjoying your culture’s food.

“As a first-generation Cuban-Brazilian making Cuban food, telling my own story, I’m making it accessible in this modern Western society. Yeah, I do think I’m decolonizing the food. I want to tell my story. I don’t want some white male to be cooking my heritage recipes and bringing that over,” she continued, “I would say that I am just pushing the narrative of my culture in a way that is modern and makes sense to me.”