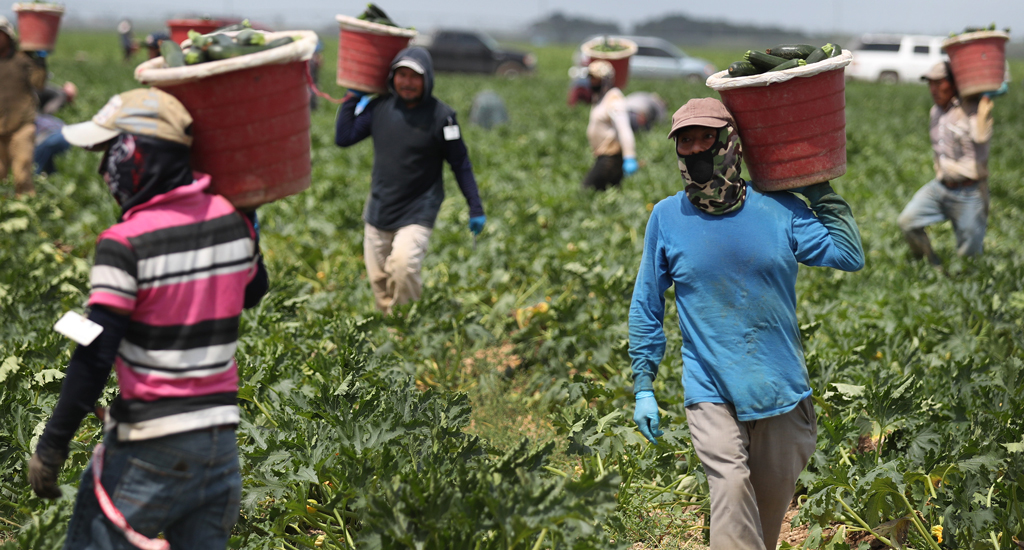 Crowded housing conditions. Eight or more workers in a trailer home. A country—or more—away from family and friends.

These are some of the conditions H-2A farmworkers—guest workers from other countries—face as they continue to do their jobs as “essential” workers amidst the COVID-19 pandemic.

These conditions are also why H-2A hires are seen by some as the most vulnerable of farmworkers in the agricultural system, and some labor organizations are worried they are not being protected enough.

H-2A laborers are a group of temporary, nonimmigrant agricultural workers who help “perform agricultural labor or services of a temporary or seasonal nature” when employers and growers cannot find enough U.S. workers to fill these jobs. They can work anywhere from 10 months to 3 years in the United States—depending on the industry and how long their employer contract is—and they must return to their home countries when their employment contracts end. (A new temporary final rule meant to help growers find farmworkers during the pandemic, now allows H-2A workers to stay in the U.S. longer than the three-year maximum.)

But these unique positions sometimes leave H-2A workers susceptible to poor working conditions, wage theft, and other forms of labor abuse—abuse that during a pandemic, could lead to even more harmful outcomes.

During the start of the COVID-19 outbreak, United Farm Workers (UFW) and other grassroots farmworkers’ rights organizations voiced concerns for months that domestic field laborers and H-2A workers needed more than just masks and gloves to protect themselves against the danger of COVID-19.

“It’s really important to maintain social distancing in the fields. […] We have seen several union companies who have been implementing these preventative measures but not all growers are following these recommendations. Unfortunately this is the reality farmworkers have to face, especially during this time,” Leydy Rangel, spokesperson for the UFW Foundation, said.

One of those H-2A farmworkers is Carlos—a 43-year-old man from Sonora, Mexico. Carlos currently works on a California farm near the Oregon border that grows and harvests strawberry plants. He’s been coming to the same California farm for the last few years, while his family lives thousands of miles away in Mexico.

“Insecurity, fear and distrust most of all,” Carlos said about his feelings regarding the pandemic over a phone interview with BESE.

“I have young children. I myself worry more about my family—one knows that oneself comes second. I’m afraid to get the virus and worse, how do I leave my family? What happens if I get gravely ill?” Carlos, who is the main breadwinner in his family, said.

According to the U.S. Department of Agriculture Economic Research Service, in the last 13 years, H-2A positions increased from just over 48,000 to nearly 243,000 in fiscal 2018. That’s 243,000 workers—albeit temporarily—who are at the mercy of their employers.

Throughout the duration of their contracts, employers are responsible for providing H-2A workers with food, housing and transportation. Because of this, labor unions such as the UFW are worried that the nature of this program will make it difficult to maintain adequate social distancing, and make it even more difficult to report employer violations of the program.

“All of these components [food, housing, visas] depend on the employer, which is why it’s so difficult for H-2A workers to voice concerns—they are maybe the most vulnerable group of workers, at the moment, of farmworkers. H-2A workers live together in cramped spaces, travel together on buses—a lot of the time it’s in a yellow school bus, in many instances, it’s three to the row. They have to eat together because all meals are provided by employers. Even when they are in housing, they are still eating that food that is supplied by the employer. We see sometimes in this instance that they are being malnourished. One case of an employer in Georgia, they [H-2A workers] were given Gatorade and Cup of Noodles. […] Now with COVID-19, they are very, very susceptible to a lot of abuse,” Rangel said.

A report recently published by the Centro de los Derechos del Migrante, found that 45% of H-2A workers they surveyed out of a group of 100, had reported unsanitary and overcrowded housing conditions. Thirty-five percent of those surveyed also said they did not have necessary safety equipment. If continued, working conditions such as these can become hazardous in the wake of the COVID-19 outbreak.

“It’s been difficult for H-2A workers to abide by CDC recommendations. There have been no additional requirements for H-2A workers regarding health and transportation in response to the COVID-19 pandemic,” Alexis Guild, Director of Health Policy and Programs for Farmworker Justice, said.

Social distancing measures have added an extra strain on organizations that help survey and check in on the conditions farmworkers are laboring under in the fields—an important outreach for H-2A laborers who often come to the country alone. These individuals are often afraid to report workplace violations, says Nezahualcoyotl Xiuhtecutli, research coordinator for the Farmworker Association of Florida.

“Especially to H-2A workers, they are very difficult to talk to. They are very isolated and the nature of their contracts is very isolating, so they don’t get as much contact with the outside world, so that’s why it’s important to talk to make them aware of their rights. [Because of] social distance, something we normally do, like go to fields and talk to them and talking to them about having access to water and shade, and pesticide exposure, we cannot do at this time,” Xiuhtecutli said.

Antonio Tovar, interim general coordinator and principal investigator for the Farmworker Association of Florida, said prior to the pandemic, H-2A workers have reported multiple employer violations of the H-2A contracts, such as a lack of food, getting charged for food in situations where the employers should be providing meals at no fee, and wage theft.

“It goes back to the way the H-2A program is set up,” Rangel said. “We call it the ‘H2A harnessed to abuse’ program because it allows abuse to happen,” she said.

While overhauling the entire H-2A and farmworker-employer system has been a longer battle, protecting workers during the spread of COVID-19 has taken center stage.

On March 17, the UFW sent out an open letter to agricultural employers and organizations to enact preventative measures protecting all farmworkers (domestic and H-2A alike), including extending sick pay, asking growers to stop the practice of asking for a doctor’s note when a worker calls in sick, asking for paid administrative leave if a farm laborer or their spouses or children are diagnosed with COVID-19, and offering daycare and flexibility in regards to caring for children while schools are closed.

“Any guidelines that are failing to address the paid sick part are counterproductive for farmworkers,”  Andrea Delgado, UFW Foundation government affairs director said, regarding the provisions of the open letter. “These workers are essential, they have to work because of economic necessity and you don’t want to be putting farmworkers in a situation where they are taking care of themselves or making a living, because that is the decision farmworkers have to make. It’s a false choice that no farmworkers should have to make.”

For those in California, having to make that choice should now be less of an issue. On April 16, California Governor Gavin Newsom signed an executive order granting two weeks of supplemental paid sick leave to California food workers, including farmworkers in the state.

It’s a move that, if adopted across the country by other governors, could be of assistance to the millions of people, largely immigrants, who help put food on America’s tables.

But there still remains the question of health care.

“Workers’ compensation is required for H-2A workers, but it’s limited in scope, because it only covers workplace sickness and injury. It’s not yet clear what workers’ compensation will cover in terms of COVID-19 […],” Adrienne DerVartanian, a consultant for UFW Foundation, said.

Following the open letter, employers began to hold meetings for their workers to discuss measures to protect against COVID-19.

Some, including Carlos’s, are enacting basic preventative measures.

“We have been given masks and hand sanitizers. We had talks with our bosses [on March 20], and they told us about the symptoms and to take care of ourselves—to let them know if we were feeling sick,” said Juan, an H-2A worker from Sonora, Mexico, who works with Carlos on the same farm and has been in the program on-and-off since 2013.

Carlos said his employer has also provided everyone with latex disposable gloves, disposable suits to wear over their suits, and has cut down the usual number of 10 workers per trailer, to eight.

Juan said their employer is currently practicing social distancing by making sure the workers are only tending to the fields and not leaving to go anywhere else around town.

“We go to work and come back home. We aren’t going anywhere but to our homes,” Juan said.

One safety measure Carlos said his employer could improve on is social distancing on the bus transportation the company provides to get to and from the fields. He estimates anywhere from 35-40 people will be on a bus to work at the same time.

Ultimately, the biggest changes will have to stem from the system as a whole—not individual employers. Though unionizing would be helpful, and some states—like Washington—have passed measures to allow for local organizing, Xiuhtecutli says something like that will be difficult to pass in states like Florida.

That’s why labor organizations are hoping for comprehensive national change. The Farm Workforce Modernization Act bill (H.R.5038), which is supported by the UFW and nearly 300 other agricultural organizations, has three major components.

The first is a path to legalization for nearly one million undocumented farmworkers and their children and spouses.

“The biggest asset is legalization.[…]  [What we] want to accomplish is legalization for the workforce that we have domestically, but also H-2A workers that might be in the program for many years, and never see an option for them to be stable in the U.S. or have better rights. That really is our ultimate goal,” Rangel said.

The second component makes a major overhaul of the H-2A program by strengthening protections for these workers and providing them with legal protection to enforce their wages, housing benefits, transportation cost reimbursements, minimum work guarantee and other terms of the H-2A job offer. It also asks to improve their living conditions, including government funding for improvement of farmworker housing, and family housing for employees who will be in the country for longer than a 10-month agricultural season.

Delgado says this section of the bill places more safeguards for H-2A workers.

If it passes, the bill also creates an option for a year-round H-2A program for agricultural industries.

While activists and laborers wait for the bill to pass, organizations continue to help farmworkers know their rights—some have even set up relief funds. The Justice for Migrant Women organization’s pandemic relief fund has already raised over $170,000.

“Relief funds could absolutely be helpful, but the best way to protect farmworkers has to come from the employers. If employers care about their workers, workers will be safe and healthy,” Rangel said.

In the meantime, field laborers like Carlos and Juan will continue to work, trusting their employers will do what they can to keep them safe during the pandemic. It’s the only choice they have.

The Flavor of Sound: Coconut Macaroons with Zoe Saldana