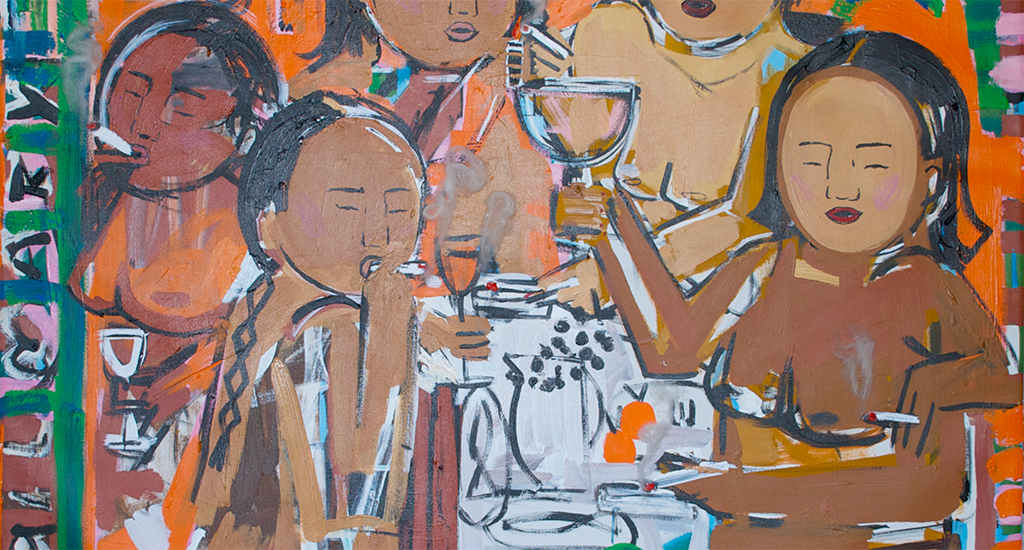 The Art of Living for Yourself: Monica Garza’s Paints Autonomous, Self-Assured Women

The women in Monica Kim Garza’s paintings are living freely. They are brown, they are round in shape, and they are nude. They’re painting, playing basketball, hiking, having sex, working out, surfing, eating or lounging at the beach, and relaxing in bed. Essentially, the women in Garza’s works are simply being, but there is an undeniable autonomy at play, too. They’re living their lives according to their own directives and standards—much like the artist herself.

In Atlanta, Garza lives near Buford Highway, a cultural kaleidoscope known for its vast representation of international cuisine. She specifically moved to the area for its restaurants. Residing closer to its galleries and museums wasn’t a priority; Garza isn’t involved in Atlanta’s art scene. That’s not for lack of connections or offers, but because she wants it that way. 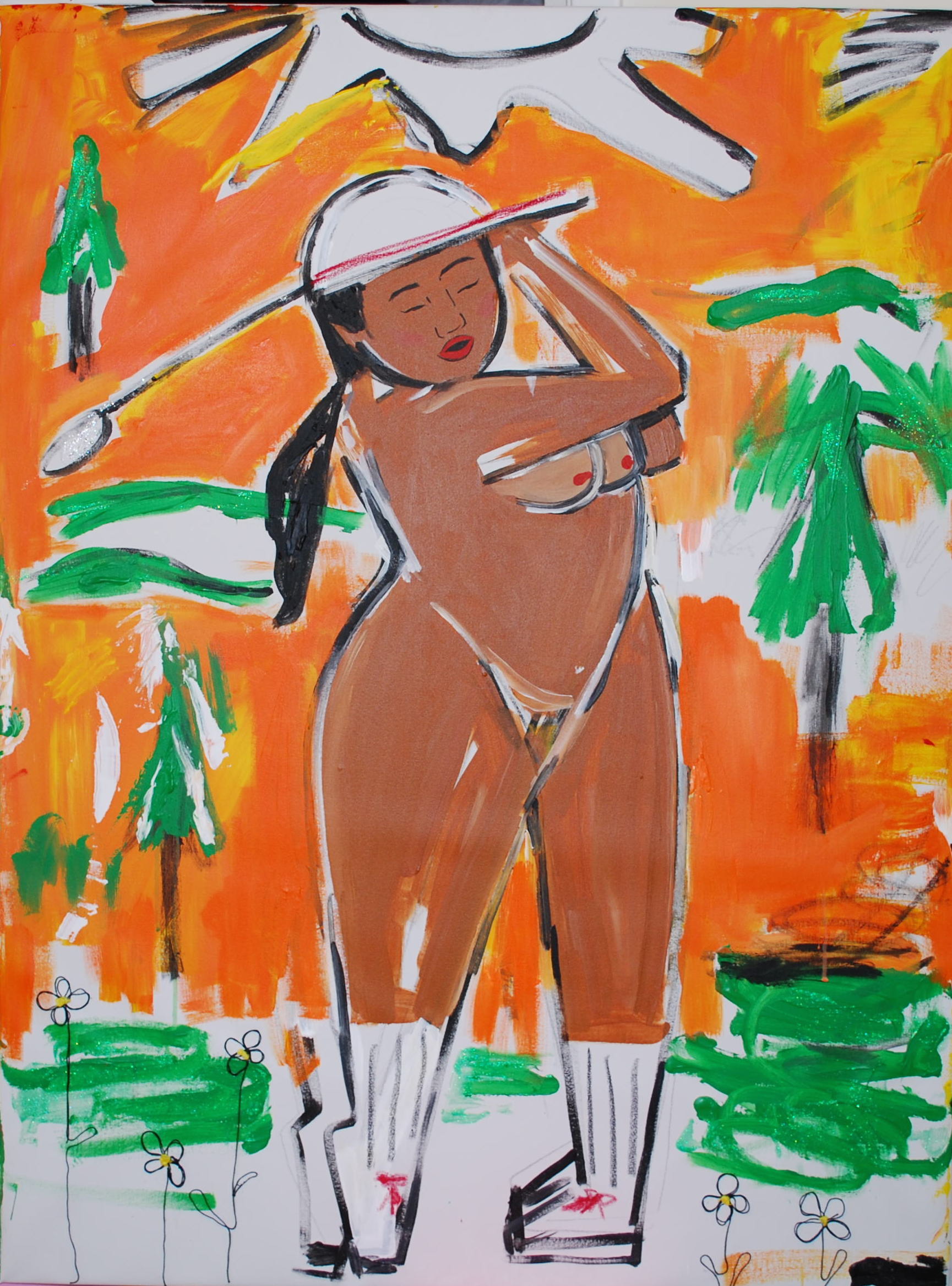 “I can’t say that I’m looking for anything in Atlanta because I really enjoy living here without doing anything related to art. I know that sounds funny, but this is like my retreat, where I make my work,” she says. “I’m not at the galleries and stuff. I enjoy being here and having friends that aren’t artists.”

Keeping work and social life separate is her “preferred way,” notes Garza, who recently arrived back in Atlanta after a trip to Arkansas, where her work was displayed in a Georgia O’Keeffe inspired exhibit called The Beyond. Although her work continues to be featured around the world, most of the time, she’s at home making art. Lately, she’s experimenting with color and the way she paints; her work is looking more abstract than before. Here and there, she’s working with ceramics, too. 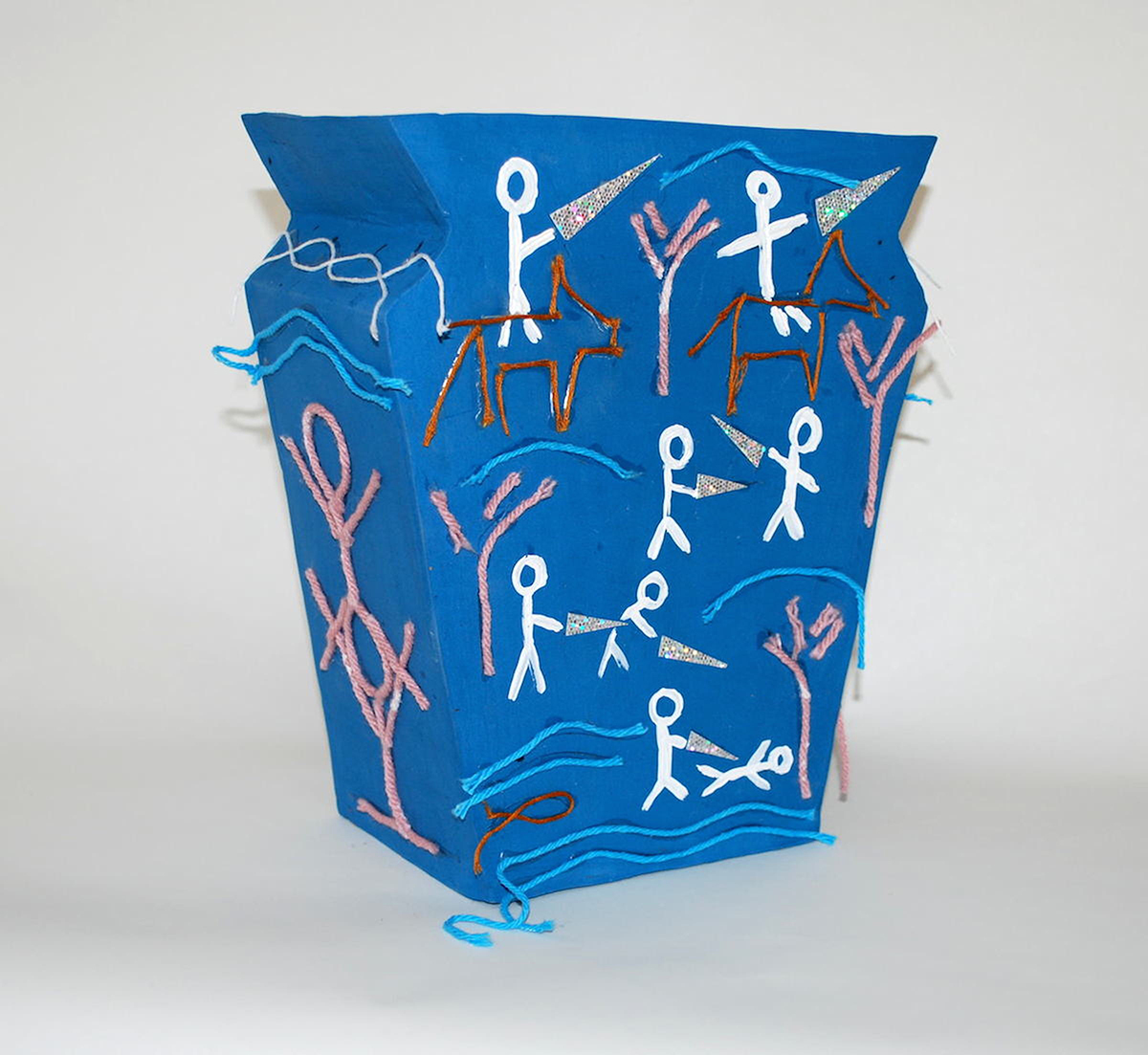 While her Instagram is updated roughly once a month, she typically features only older works. The frequency at which she creates would make for incessant posting, she implies, and that’s not something she wants to keep up with.

“In my work, I really want to be able to evolve and concentrate. So I feel like I don’t want to look at what the comments are,” she says. “I want to look forward in my own way and not rely on other influences, per se. I just kind of want my own free will.”

The relentless flow of communication that social media allows may be another reason why Garza abstains from social platforms. She wants control over her interactions—when, with whom, and how often.

“I’m just a person that really needs a lot of time to myself. I’m an introvert, but when I’m too introverted, then I’ll go out and be an extrovert, then I need to recharge my battery,” she says. “Every time I tell someone I’m an introvert, they’re like really? I’m like yeah, I’m on full battery right now. But once I’m like, oh my god, I socialized so much, [then] I gotta go.” 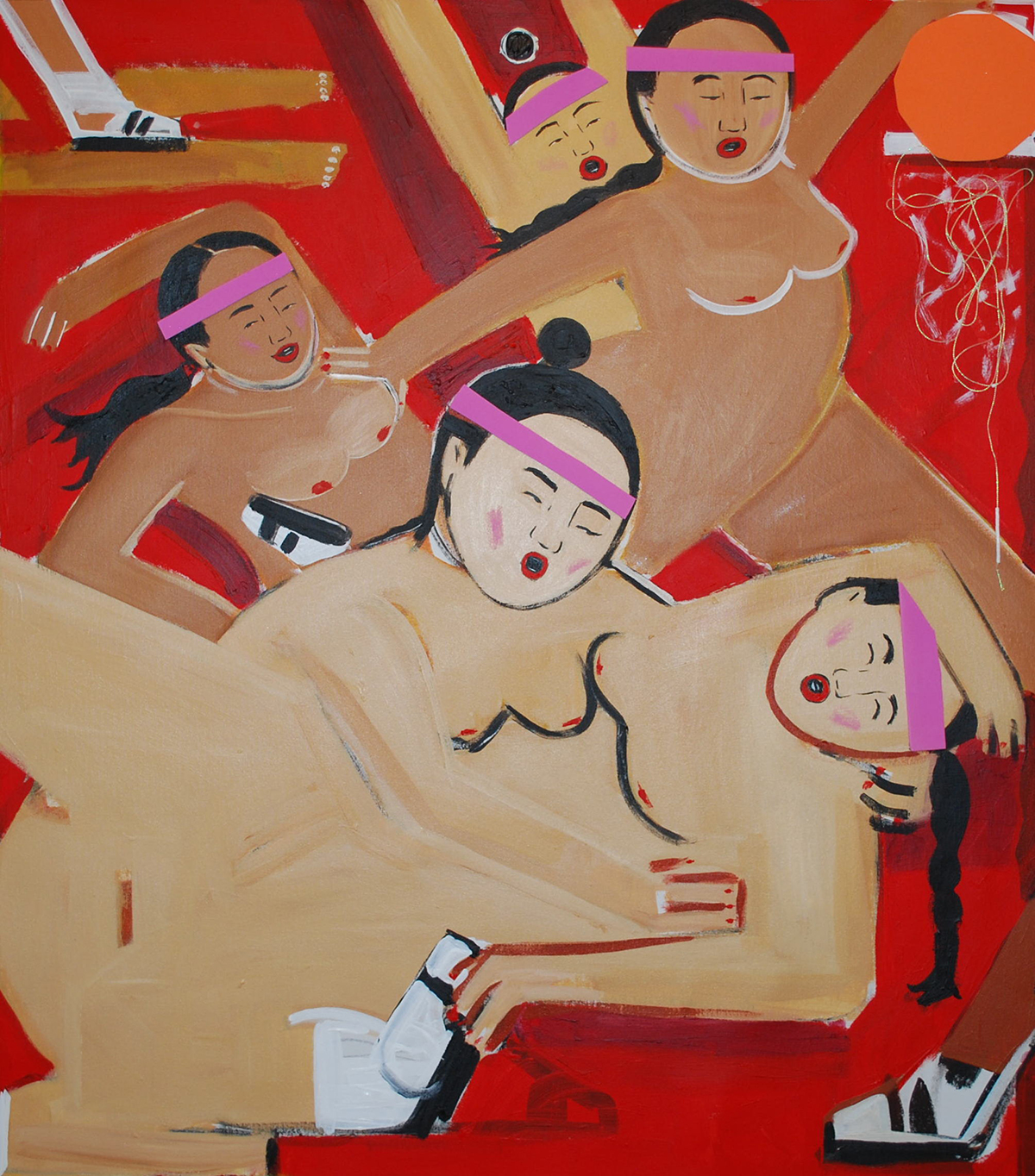 That she cherishes her solitude doesn’t mean Garza is closed off or guarded. In fact, she’ll readily reveal bits about her life that others might hide, like ruts and low periods. College was one.

“I didn’t like the system,” she says. “I felt like I made a lot of work when I was in school, but sometimes, I don’t know, when I was in school it just felt for some reason it was more about, do your professors like you? Because it’s kind of hard to grade art, and it just felt more about your connection with your professor. So I didn’t like that.” 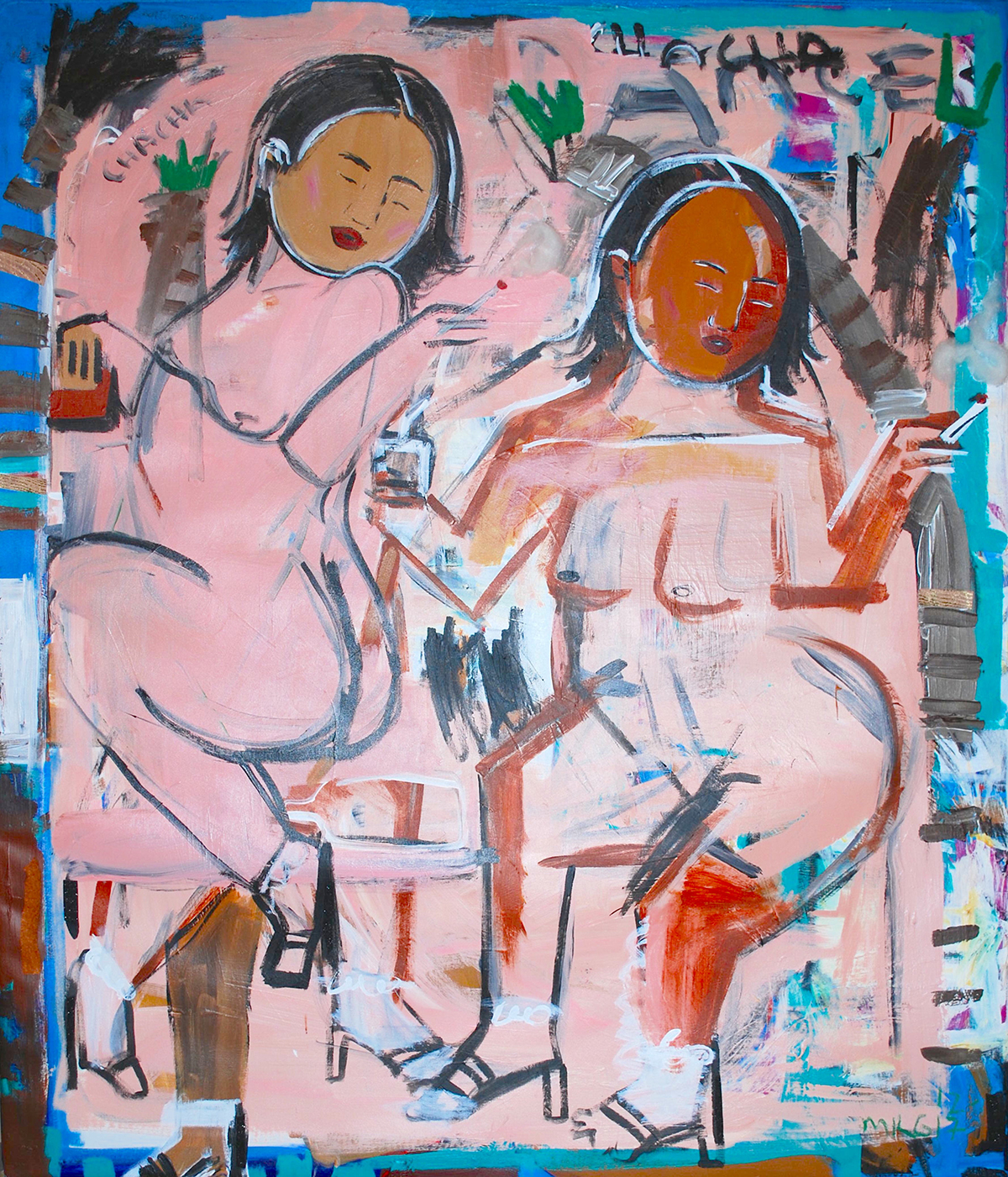 She struggled but saw it through, then left for Korea, where she taught English for two years. After, Garza traveled, backpacking throughout Southeast Asia and exploring Peru for three months. Returning to the U.S. with a brief stint in Atlanta, she eventually found herself working in the office of a New York school, depressed and wanting to make art full time. Two big gigs, a collaboration with the skateboard company 5Boro and another with the handbag label Kara, definitely helped, but she still couldn’t afford to quit her day job. So she headed back to Georgia, where she settled first in the basement of her parents’ house—back in the small, typically southern town of Warner Robins, about two hours south of Atlanta, where she grew up. 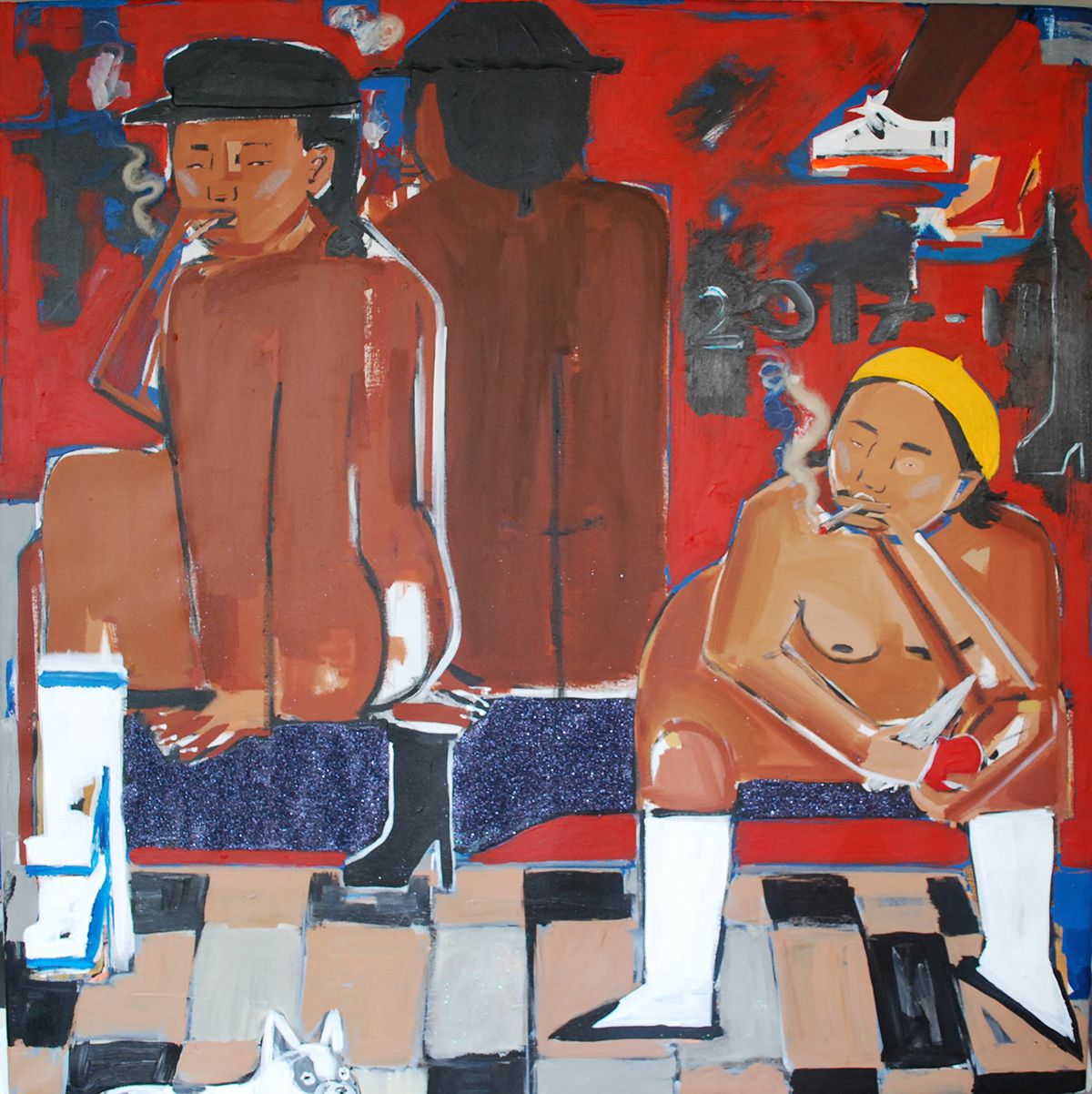 In population, Warner Robins is not unlike the Arkansas locale she just visited. But it’s a military town, centered around a major Air Force base. Beyond that, there’s basically just football, and the “opposite of diverse,” she says. Though originally born in New Mexico, she spent most of her childhood there—a person of Mexican and Korean heritage, living in a stereotypical southern environment, discrimination and racism included. And in the pre-internet 90s, Garza’s exposure to any other kind of environment was limited. She thought the rest of Georgia was just like Warner Robins.

“I couldn’t wait to leave,” she says. “I always felt a little off or whatever. But growing up, until you go to see other stuff in life, you don’t really realize that you’re living this way, that there’s other places that are diverse. Growing up, I just thought that was what it was. Like, this is life. So I can’t say that I felt bad, but I know I didn’t feel great. I didn’t know that it could be [anything else].”

At home, however, she was surrounded by art; both of her parents appreciated and collected paintings and sculptures, and her mother, who formerly owned a boutique in Korea, made all of Garza’s clothes, even dresses “with those big, poofy sleeves.” But while her parents are strong supporters of her work (Garza’s Catholic father especially), they’re also very conservative; their beliefs put a certain kind of respect on a pedestal, high above conversations about sex or nudity—both of which are featured in Garza’s art. 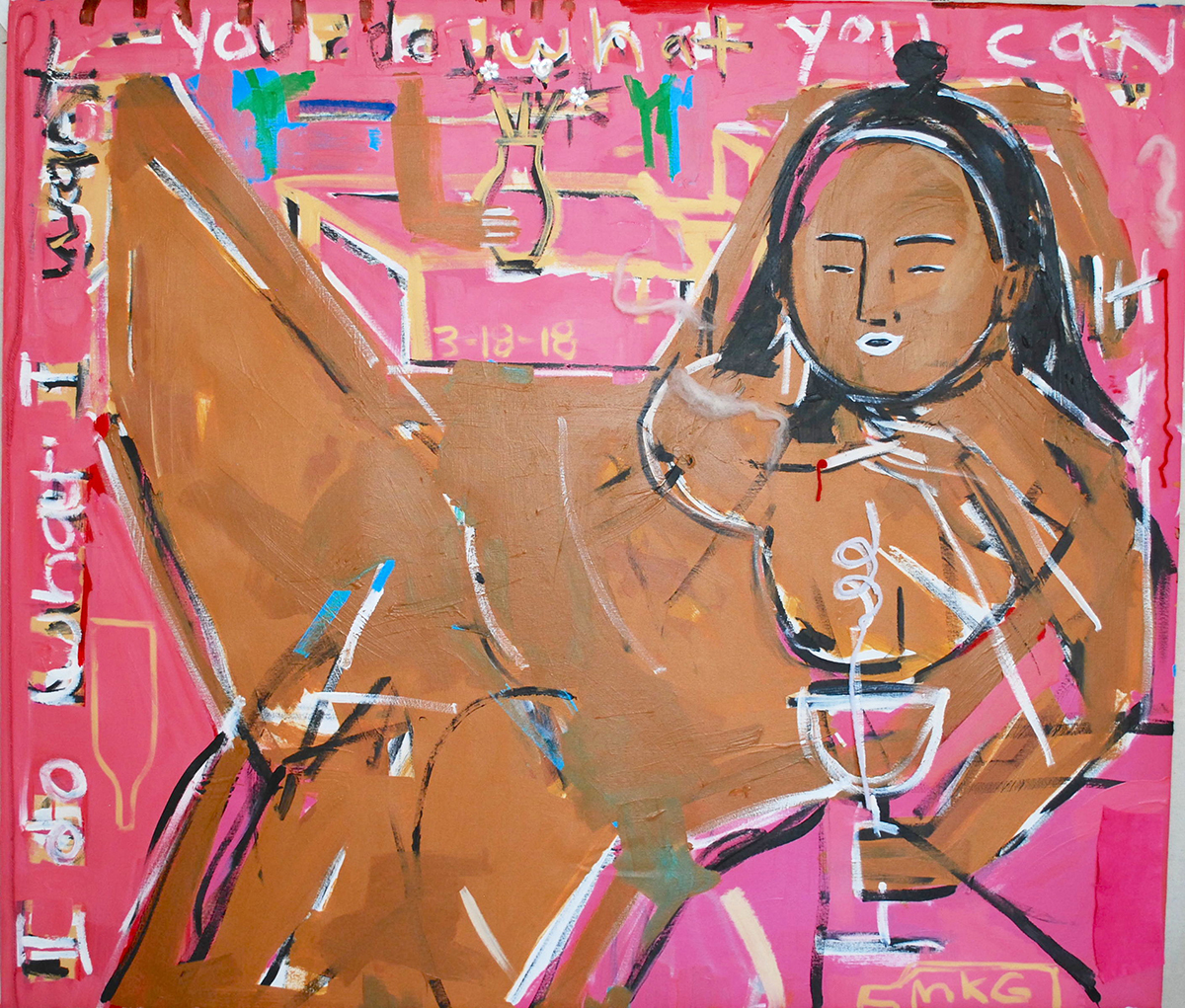 Her diligence during that transitional homecoming paid off quickly. After a year with her parents, saving on rent and “slinging chicken wings,” she left.

She might move again soon, though not away from Atlanta. Garza is eyeing a loft in Cabbagetown, about 10 minutes from downtown proper—but that won’t equate to a spike in art scene involvement. Retaining her privacy is paramount, and Garza is steadfast. She’ll live how she wants to live—just like the women in her paintings.

The self-assurance in those images, of these women who are comfortable and living freely in their brown bodies, can strike a chord in so many viewers—people who already hold close their own independent, as-they-like-it lifestyle, as well as those still striving. The women Garza paints may even open someone’s eyes to an autonomous kind of happiness they didn’t previously realize was possible.