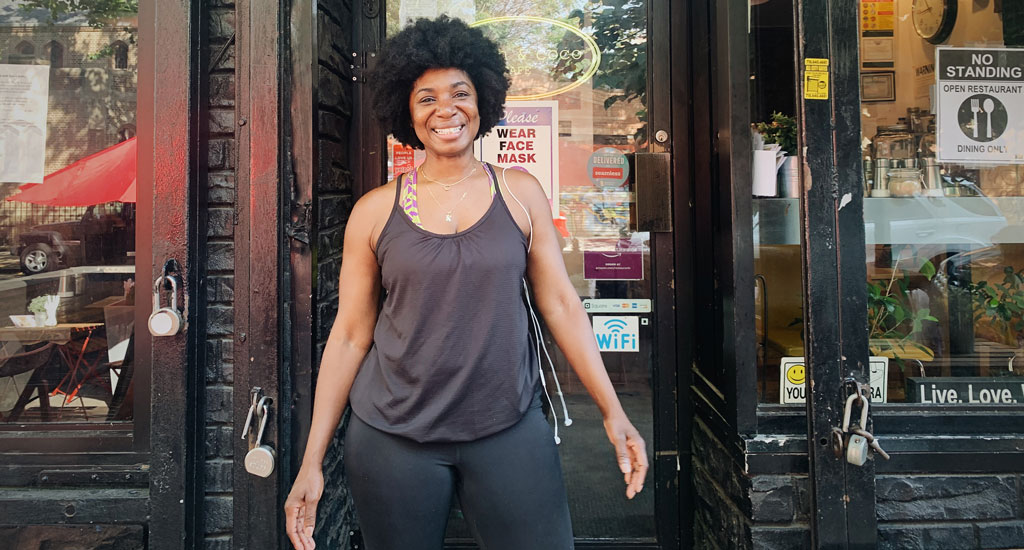 Whenever Anna Owusu was craving some fresh food, she would have to leave her home in Bed-Stuy and venture out to wealthier neighborhoods in Brooklyn. She has lived in the Brooklyn neighborhood for over 20 years, and during that time, found that her surrounding restaurants and markets were not equipped with healthier and affordable options.  According to a New York City food metric report, low-income neighborhoods historically lack full-scale grocery stores, which usually carry healthier options for the consumer.

The Ghanian-American was tired of this reality.

One day, while jogging past a series of brownstone buildings, she decided that instead of going outside of her neighborhood for healthier food, she would bring the nutritious options to her community.  A decision that soon became a reality through the Butch and Coco Cafe—a one-stop-shop for home-cooked meals. The restaurant, owned by Owusu, resides on Howard and MacDonough Street, and their menu includes healthy,  fresh, and made to order foods. But the delicious food isn’t the only thing that makes Butch and Coco stand out; it’s how Owusu cares for each of her customers, allowing the small-business to shine among the rest.

In her history, whenever she went to a restaurant, she was always treated poorly as a Black woman, and Owusu mentioned that the food she was served was not always fresh. This is why she prides herself on creating a safe space for all who enter her cafe.

The ethos of Butch and Coco is one of love. Anna Owusu values people over profit, and it shows in every decision she makes: from cooking with only fresh ingredients to intentionally hiring people who otherwise might not be hired elsewhere.

“I’m going to look out for my people,” said Owusu.

She invests in her community and wants to change the fabric of the neighborhood through her choices.

In the cafe’s first two years, Owusu, her mother and best friend were the entire cooking and delivery staff. But this method wasn’t sustainable. To catch up with the demand, Owusu had to hire a team.

As she was hiring her staff, she noticed a trend in applicants. These were single mothers, Black teenagers, Black men, and other individuals who had trouble finding work elsewhere. People who were turned away from other jobs, but to Owusu were faces that deserved a chance to make their dreams come true. Today her entire staff is made up of young people, formerly incarcerated individuals, people from the African diaspora, and individuals living with mental illness.

As a child of immigrants, Owusu was raised with the adage that all people deserve respect because you never know who people are. This proverb rings true as it alludes to every individual’s value regardless of race, sex or history. She  hires based on the needs of her staff and the needs of Butch and Coco.

It is because of her staff that Owusu decided to keep her cafe open during the pandemic. They are her reason for continuing despite the setbacks.

In the early stages of the pandemic, Owusu held a meeting with her employees and they told her, “Whatever you want to do, we’ll do. This is as much yours as it is [ours].” They all agreed to keep the cafe open.

She never imagined that as a first-generation Ghanian-American, she’d be the owner of her own restaurant. Owusu emigrated from Ghana at the age of four without being able to speak English. She grew up in a large family with 10 siblings in the Bronx, and as the oldest girl, she began cooking with her father and prepared her first Thanksgiving meal at the age of nine.

Owusu soon became known for her excellent cooking skills throughout her Bed-Stuy neighborhood. A reputation that quickly spread after her  sister moved her hair salon business out of their Brooklyn apartment and into an open space—the same space that Owusu had jogged past all those years ago. She would bring food to her sister Liz’s new salon location and her sister’s clients soon caught on to Owusu’s culinary talents. They would order meals from Owusu. It didn’t take long for word of mouth to make its way around the neighborhood about Anna Owusu’s mouthwatering breakfast delicacies.

Her morning jog  all those years ago was a mark of destiny. “Sometimes, in life, you don’t plan things, and it just happens, ” she said.

Butch and Coco’s early beginning were slow. Owusu and her business partner had to pull from personal funds to cover expenses. But once people in the neighborhood saw that they were staying open and it was a safe space, they kept coming. Over time, Owusu has seen the neighborhood change. Now, there are more restaurants owned by people of color since her time on Howard and MacDonough. It brings her joy to see her people flourish in a landscape that was once a food dessert.

Lost in Translation: A Poem by Damneet Kaur