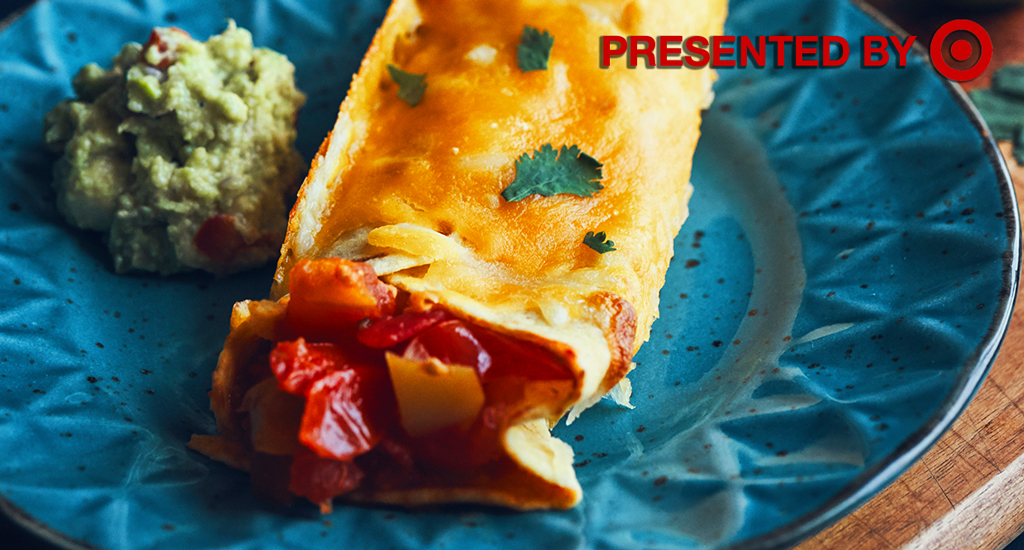 I grew up as a biracial Chicana in northern California, with my Mexican mother’s interpretation of TexMex enchiladas. She used chunky salsa, non-fat sour cream, monterey jack cheese, and served it in a casserole dish. Some call it heresy, I called it delicious.

Those were my first enchiladas, and thankfully not my last. They were also my first experience with Latinx and American fusion food—a distant cousin from traditional Mexican enchiladas in the Guanajuato style, with lightly fried corn tortillas stuffed with stewed chicken, and slathered in a thick sauce made of roasted guajillo peppers, tomatoes, garlic and onions and topped with queso fresco, cilantro and red onions. Then there are the enchiladas you’ll find along the I-5 in California or on a pilgrimage to Mi Tierra Café y Panadería in San Antonio, Texas: those same fried tortillas are stuffed with chicken and drenched in cumin enchilada sauce and then covered in melted monterey jack and yellow cheese—with even more cheese piled on top for good measure.

Across the US, there are dozens of versions of the enchilada, each reflecting the regionalisms and hybridizations of the cultures present here. But the story of Latinx and American fusion food is far bigger than enchiladas and expands far beyond the limits of my mother’s kitchen, and today Latinx chefs are recreating classic dishes with modern and American influences.

Mírame is the Michelin Star chef Joshua Gil’s latest restaurant, described as, “contemporary Mexican with a California sensibility.” In a word, it’s fusion. But fusion is often a maligned concept, especially when it comes to food which draws from both Latin and American traditions. Is fusion really just a watered down version of different cultures? Worse, is fusion yet another form of culinary colonization?

To the Mexican American chef hailing from Baja, the answer is: No. Gil’s new restaurant is in Beverly Hills, and each of his dishes from his kampachi tostadas served with preserved lemon to his pork belly tacos topped with persimmon pico give the elite culinary world his own Latino punk spin. (In true SoCal style, Gil was in the Latinx punk band Pinchi Swatos)

“The reason we called it Mírame [translated in English to look at me!] is [because] people on both sides want to dictate what Mexican food should be,” said Gil. “ It’s not just the privileged from the neighborhood who have their idea of what Mexican food needs to be. Our own Mexican family calls me a sellout for opening here [Beverly Hills] and says things like ‘Mexicans don’t eat sea urchin.’” Gil, who grew up in Baja, said he ate sea urchin all the time.

Some of Gil’s seafood dishes pay homage to the Chinese influence of his Mexicali roots. Others are playful interpretations of Mexican classics. His menu has a crispy, lightly aerated salmon skin chicharon, and his fried chicken tacos are a thing of beauty. While fried chicken and brisket tacos are ubiquitous throughout Tennessee, Georgia, North Carolina and the American South, Gil elevates what might be thought of as a humble taco. His chicken is marinated in buttermilk like traditional fried chicken, and then he adds poblanos and jalapeños to the batter, and later serves the dish with quesillo cracklings, and a black lime gastrique, fusing Middle Eastern and French influences in the dish.

As Gil proves, there are no limits to what Latinx and American fusion food can be. For centuries, Indigenous, Asian, African and European cultures have influenced cuisines across Latin America. In the United States, especially, we’ve seen even more interplay of cultures in our food.

Take for example, El Cubano. The roots of El Cubano sandwich are disputed, however many food historians claim that the sandwich originated in cafes in Tampa, Florida in the mid-1800s, where local restaurant owners were serving Cuban, Italian and Spanish immigrants working in cigar factories in Key West. Today, the Cuban sandwich is a staple in Afro-Latino, American and Cuban restaurants in Florida, New York and throughout America.

The traditional Cubano is a riff on the grilled ham and cheese sandwich, and consists of slow roasted pork or lechón marinated with citrus and oregano, ham, swiss cheese, mustard and pickles. The sandwich has evolved, with some chefs creating the Cuban Reuben and adding pastrami or sauerkraut. Others, like the son of Honduran immigrants and author of The New World Sourdough, Bryan Ford, have reinvented the food entirely with his take on the Cubano pizza. Ford takes the concept of comfort food and gives it depth and complexity with his crunchy sourdough crust, spicy mustard and tangy dill pickles.

Meanwhile, Puerto Rican chefs are remixing traditional dishes like mofongo— a mixture of mashed green plantains, garlic and chicharon. The dish has West African roots and variations of it can be found across Puerto Rican, Dominican and Cuban restaurants. For example, the northern California restaurant staple Sol Food serves a tostones po’boy. And at Casa Borinqueña, the chef Lourdes Marquez-Nau has updated mofongo, with a vegan twist with her Mofongo Impossible Meat Burger.

She told BESE, “Puerto Rican food is known all over, but in the vegan community it’s not. I realized if I’m bringing a traditional Puerto Rican dish [to the vegan community], they might not understand it. So I’ve had to manipulate the dish so they’ll welcome it.” Rather than feeling restricted by these obstacles, Marquez-Nau has embraced them. She’s even felt inspired to do more fusions, like her vegan coquito.

My mother laughs when I ask her about her TexMex enchiladas, “Your dad asked me for enchiladas and I had to work with what I could find at the grocery store. I was looking for Herdez salsa and all I could find was La Victoria.” She shrugs, “So I did what I had to do.” Her enchiladas have come a long way since then, sometimes she roasts tomatillos for her salsa verde, and other times, she takes butternut squash, toasted pepitas, and her frijoles de la olla and wraps them in lightly fried tortillas with her own homemade salsa. Like the Latinx chefs that came after her, she’s redefining fusion food on her own delicious terms.

Three Revolutionary Books to Read This January with Lupita Aquino