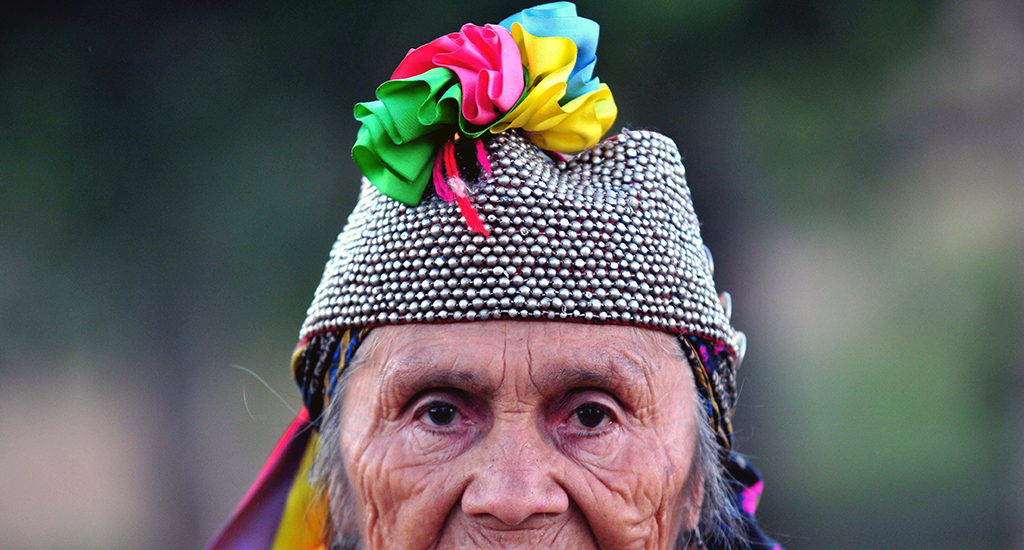 The Cultural Shift and Mainstream Acceptance of Brujeria

Above: A machi, the traditional healer and religious leader of the Mapuche indigenous culture. (Ariel Marinkovic/AFP/Getty Images)

¡Bruja mala! The old folk tales that are passed on from generation to generation are filled with women who are depicted as evil witches who inflict misfortune, illness and have the ability to destroy. The obscure spiritual practice of Brujeria long held negative connotations. Yet there’s now a global movement where millennials are reshaping this perception and acknowledge its feminine legacy. Young women (and men) rediscover, embrace and find power in the spiritual wisdom of their ancestors.

The literal meaning of the Spanish word Brujeria is witchcraft. The practitioners of the spirituality are brujas (female), brujos (male), or brujix (genderqueer). Modern Brujeria is in its essence magic that is a blend of folklore, herbalism, African magic and healing, and Catholicism. It usually involves charms, divination, love spells and hexes. The historical significance of Brujeria goes back to the early 15th century before indigenous communities were colonized by the Spaniards.

Social-cultural anthropologist Raquel Romberg notes that in the 15th and 16th century the Catholic Church identified the healers as witches, since Brujeria was not based upon Christian paradigms: it didn’t worship a Christian God and didn’t comply with the Catholic Church’s religious roles and functions. It was a huge clash between Old World and New World beliefs. 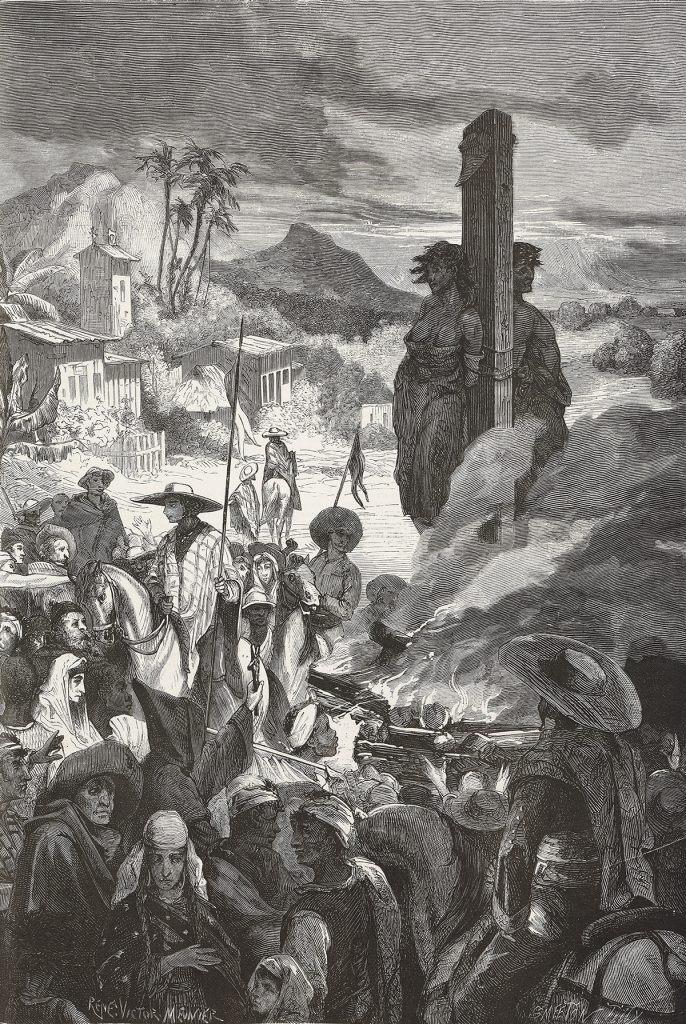 Two witches being burnt at the stake, Mexico, illustration by Smeeton and Tilly and Meunier from L’Illustration, July 11, 1874. (Getty Images)

The Spaniards didn’t understand the cultural practices, and the leadership position of women within afro-and indigenous culture stood in stark contrast with Spanish patriarchal societal conventions. Brujeria was seen as superstitious and primitive—though they later used a veneer of Catholicism to absorb indigenous practices and placed them in their own religious context. As a result of colonization, indigenous communities were forced to convert to Catholicism, thus their religion became invalidated. The demonization of natural spiritual practices eventually led to the persecution of healers throughout the Caribbean, South America and Central America. 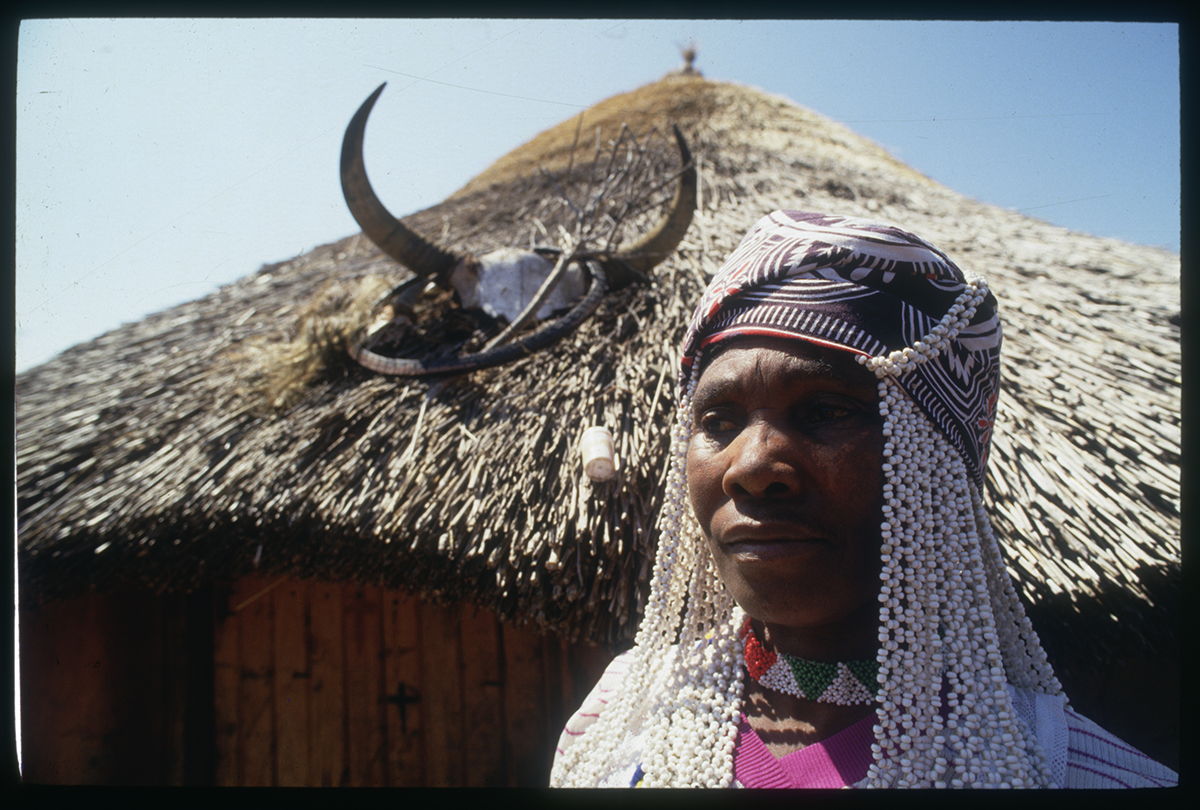 South African Sangomas are wizards and witches so respected and trusted that western medical authorities have actually advised the government of South Africa to develop its cooperation with Sangomas in order to improve hygiene and health among the population. (Photo by Patrick Durand/Sygma via Getty Images)

However, within the span of five centuries—as a result of economic, political and social conditions brought by slavery, colonialism and migration—Brujeria converged witchcraft and (Christian) religion from indigenous, African and Spanish culture. From Cuba, Brazil, Puerto Rico to Haiti, the significant influence and rituals from the African ancestors (The Yoruba) is present in the various natural spiritual practices—despite the Christian cultural framework. Whether it’s Puerto Rican Brujeria, Cuban Santeria or Haitian Vodou, you’ll notice that the colonization and Catholicism combined with afro-and indigenous history ensured a cross-fertilization of religion. Despite its historical and cultural significance within Latinx culture, the spiritual and cultural practices of Brujeria, and subsequently brujas, still stood in a negative light.

Brujeria has been passed on from generation to generation despite the racism, oppression, and isolation of the spiritual practices. What was once obscure has now come to the cultural forefront by young Latinx people who identify as brujas, and who want to embrace their history and culture.

In modern pop culture there are more and more references to the divine feminine and religious practices of Brujeria. In 2016, Afro-Puerto Rican Rapper Princess Nokia acknowledges her connection to the spiritual practice and her ancestry. In the track “Brujas ” of her EP 1992, she raps:

The spiritual practice was also present in the transgressive web series Brujos. Creator and writer Ricardo Gamboa centered his series around a coven of gay Latino brujos in Chicago. In the future Brujeria will also appear on mainstream television. The Mexican-born playwright and television writer Tanya Saracho (known for Devious Maids and How to Get Away With Murder) announced in January that she’s developing a television show, aptly named Brujas, that is centered around the Bruja movement in Chicago, and it follows four Afro-Latinas.

The renewed interest in Brujeria can be linked to the rise of modern feminism in our current political climate—significantly more women are embracing Brujeria. On social platforms, from Tumblr to Twitter or Instagram, women share their inherited knowledge of herbs, spells and magic. Chicana feminist scholar Irena Lara notes that ‘la Bruja’ is a symbol of power outside the parameters of the patriarchy that also challenges the sexist status quo. Thus for the modern young woman it’s a fantastic source of power whilst creating her own space in a patriarchal society.

Modern-day Brujeria spans music, film and TV. The Bronx-based multi-initiative Brujas is a political support network for young women (and men) of color. The organization, which mostly consists of Latina, indigenous and black women, was originally created for female skaters in New York. The group found their strength in solidarity in order to confront patriarchal skate culture. In an New York Times interview they spoke about the cultural relevance of skating, stating that it, “is a way to reclaim our freedom, and create a space for dialogue.” What started out as a female skate crew has now turned into a radical youth-driven organization with their own events, education, clothing lines and partnerships.

The once hidden practice of Brujeria has now become a global feminist movement where young Latinx folks reconnect with their indigenous and African roots. Seeing the beauty, wisdom and agency of your ancestors, and believing in the strength of Brujeria is the ultimate act of resistance.

The Unwavering Activism of Luisa Moreno