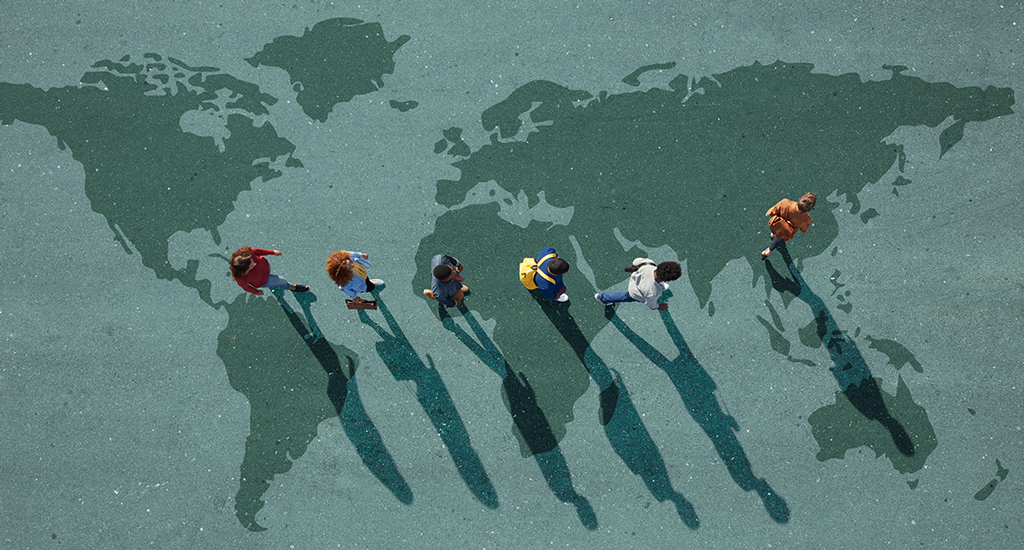 Having to constantly explain where my accent comes from, since an abrupt move to London a few months ago after a couple of years attempting adulthood in Lagos, has had a funny way of putting where I belong into focus. While it is very popular these days to have outstated views on where immigrants belong, as an immigrant it is often difficult to clearly define one’s own place of belonging. Human movement, an act as transformative as it is natural, has been steadily criminalized in countries all over the world to the detriment of greater society.

In the months that have passed since my move, I have found an amazing barber in South London who mostly speaks in a thick Patois that I do not understand, and learned to say chips when I mean fries. It has not taken long for me to appreciate how transformative intentional immigration can be. Discovering new parts of myself in a completely foreign country has driven home the fact that our surroundings greatly shape our perspectives and probably more importantly, our prospects. Most of today’s coverage of human migration is never set in themes of exploration or self discovery, but one of citizens versus intruders.

Now, more than any other time in recent memory, people are concerned with “outside invaders” (read as refugees, immigrants) coming in to take what is rightfully theirs. A very clear message of hostility has been broadcasted to members of minority groups in countries all over the world, with overt bigotry and violence on the rise. In doing this, there is an assertion of ownership being made, where a select few people can define the terms of home, and by extension who belongs in said home. The definition placed before us; that home is a fixed, immutable place, is at the root of bigotry and fascism. It is also a definition that is deeply at odds with the colonialist histories of much of Europe’s superpowers and the United States.

Colonialism, defined by the colonized as an extraordinary exercise in theft, erasure, and brutality, was founded on the premise that colonial masters could lay claim to whatever land (and adjoining wealth and resources) they could set foot on. This meant that whether it was the shores of West Africa or the far reaches of Native Peru, colonialists could make any place their home simply through force of will (and considerable violence). This historic campaign of greed-fueled human movement set the stage for a future of underdeveloped, unstable nation-states. It is important to remember how historical human movement has led us to where we are today.

The repercussions of this ideology are staggering, both in terms of cultural and human impact. The reality for many migrants attempting to find a new belonging is a harsh one. The land of the free has shown itself to be callous enough to literally cage immigrant children, separate families, and run what can be best described as concentration camps. Frustrated by staggeringly low visa-acceptance rates, thousands of Africans risk (and often forfeit) their lives and freedom trying to enter Europe through treacherous desert routes and dingy boats. Criminalizing human movement, a constant of our existence, in rhetoric and/or policy, will always come at a staggering moral cost. Could we, for a moment, imagine a world where we welcomed migration and knocked down the political complexities of physical borders, where people are allowed to connect and explore freely? The internet serves as an example of what that might look like.

The internet is perhaps the greatest invention of humankind in part because it transformed the scale of teamwork, allowing physical borders to be diminished. From this foundation of mutual understanding and collaboration, we have been able to make gigantic leaps in medicine, physiology, architecture, transport, etc. International research teams are able to make leaps in modern medicine that could improve the lives of millions. Images of boys stuck underneath soon to be flooded caves could be digitally transmitted to aid their miraculous rescue. Throughout our recent history, we have evidence of some of the incredible feats of human collaboration. If distributed systems of knowledge bases have gotten us this far, one wonders what innovations lie in the realm of a truly distributed and connected world.

It is clear that there needs to be a change in general thinking, a hard reset to the way that we think and speak about immigration and statehood. A worldview that accepts humanity as humanity—regardless of physical connections to arbitrarily drawn out nations—will only foster a better reality. I am of the opinion that, without first wrestling the definition of home and belonging out of the hands of bigots and opportunists, there will be no progress on this front.

I have come to know that, for myself, home exists in oud fragrances that evoke memories of my father, in tastes of food from one’s past, in pulsing Afrobeats music, awkward prepubescent memories and probably most importantly, in my dreams.