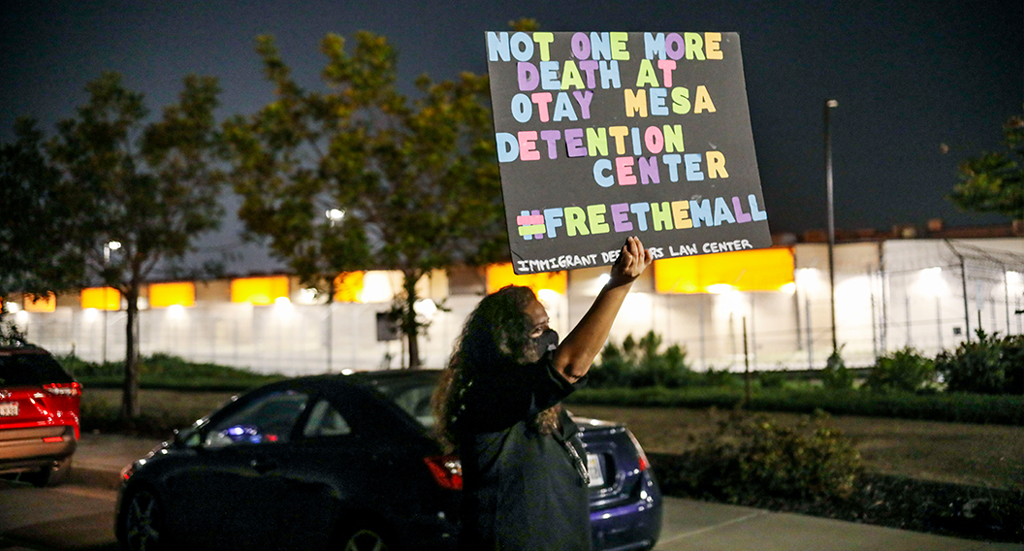 U.S. detention centers are no safe haven to weather the COVID-19 storm. While most U.S. states have imposed lockdown measures to curb the spread of the new coronavirus, tens of thousands of immigrants in confinement are fearing for their safety even more than before.

Every day, people who see the U.S. as their home are arrested, locked up, and removed from the country. It’s the result of the modern U.S. policy on immigration enforcement and asylum processing that has taken its form in the last four years. As of January 2017, the Trump administration introduced a steady stream of rigorous immigration restrictions. “We have built a machine designed to psychologically break them in the hopes that they will give up and go home,” writes journalist Sonia Nazario in The New York Times in 2018. First, the Trump administration announced a cut in refugee quotas. Then the administration began enforcing the zero tolerance policy which ensured an ongoing wave of federal immigration raids, forced separation of migrant families, and a staggering rise of detentions at the U.S. southwest border.

The impact of this deportation system has been devastating. Immigrants are uprooted, vulnerable, and left bereft of their rights and their home. As the Spanish poet Federico García Lorca wrote, Pero yo ya no soy yo, ni mi casa es ya mi casa /  But I am no longer me, nor is my home now my home. Today, more than 35,000 immigrants are in custody of the U.S. Immigration and Customs Enforcement (ICE) across more than 130 private and local jails nationwide. The Trump administration has deliberately and systematically closed the door on immigrants and asylum seekers, and the COVID-19 outbreak has done little to hurt the administration’s efforts.

From nationwide travel restrictions, to the closure of the U.S. borders with Mexico and Canada, to the suspension of the refugee program (with the exception of emergency cases)—the administration continually claimed it tried to contain the crisis with restrictive immigration policies. More than a month after the president issued the first travel restrictions, ICE continued its enforcement operations until its acting director, Matthew Albence, announced he would mostly halt the enforcement efforts on March 18. A day later, acting deputy secretary Ken Cuccinelli tweeted a “clarification” on the ICE announcement that the agency’s prioritization of criminals “does not mean that no other removable aliens will in fact be removed.”

But the unprecedented health crisis creates another obstacle. Though the appalling conditions in immigration detention centers are not a new phenomenon, they do pose a greater risk than ever before. The facilities have struggled for years with unsanitary conditions and cramped living spaces. According to a Reuters report, roughly one-third of the immigrants in ICE custody are held in centers with limited access to healthcare. Last year, ICE placed more than 5,200 detainees in quarantine in order to contain outbreaks of mumps and chickenpox. A Centers for Disease Control and Prevention (CDC) report shows that there were 898 confirmed mumps cases reported among the detainees between September 1, 2018 and August 22, 2019. The detainees were mostly healthy before they were taken into federal custody. Only 5 percent—43 people—were exposed to the virus before apprehension. The CDC and ICE worked together on their outbreak response with vaccinations and resources to implement disease control and prevention measures. Still, today, amid a pandemic, nothing has changed. The unsanitary conditions and overcrowded rooms remain, because even in the midst of a global health emergency, unauthorized immigrants are still being detained all over the country.

But what are the consequences of ICE’s inadequate policies? The lack of resources ensures that detainees are risking their health because they can’t fully protect themselves without the proper protective equipment like masks and gloves; nor do they have access to sanitation products such as soap and hand sanitizer to practice good hygiene. And then there’s the issues of social distancing, in most detention centers (well, all forms of incarceration) it’s almost impossible for individuals to conduct the minimum of six feet of distance as recommended by the CDC, because the overcrowding means there simply isn’t any room. As a result, detainees and ICE officers can easily facilitate the spread of the virus.

In April, federal judges across the country ordered ICE to start releasing immigrants from U.S. detention centers. The agency instated national policies encouraging hygiene practices and social distancing. And while ICE did release hundreds of immigrants in April, it’s no more than a drop in the ocean. The large majority of detainees will remain in confinement and, inevitably, become vulnerable to the coronavirus. As of May 5, ICE had only tested 1,346 of the roughly 35,000 detainees in its custody for signs of COVID-19. Nearly half were positive.

That’s why we need a stronger national advocacy push to alter the immigration enforcement practice, and guarantee the health of the detainees. Medical experts, human rights advocates, and lawmakers have repeatedly stated that detention centers are simply not equipped to handle the health crisis. And they’re right. The letter of Democratic Representatives Jerrold Nadler and Zoe Lofgren became more urgent in the ongoing crisis. “ICE should release certain detainees—those who pose no threat to public safety or national security—on their own recognizance or into alternatives to detention.”

On May 6, Carlos Escobar-Mejia, a 57-year-old Salvadoran, became the first reported detainee to die of COVID-19 in Otay Mesa, an ICE detention center in San Diego, California. Mejia lived in the U.S. since the 1980s and suffered from hypertension and diabetes. His preventable death does not bode well for the agency’s ability to mitigate the pandemic. But it does call for an immediate response to action to diminish the infection risk in detention centers, and, in turn, ultimately flatten the curve for all.

So what can be done? ICE can execute reasonable actions to implement positive change. First, detainees should be temporarily released in order to lower the systematic spread of the virus; at least those who haven’t committed serious crimes, migrant children and individuals with underlying illnesses. They can be included in the Alternatives to Detention (ATD) program, which includes  GPS monitoring and telephonic reporting. Then, the agency should be equipped with enough resources to screen, test and isolate their detainees when they are infected with the disease. Thirdly, ICE needs to minimize the transfer process between detention facilities—given that the revolving door of new detainees increases the risk of infection. As Andrea Flores, deputy director of policy for the ACLU’s Equality Division notes, “Immigration detention should not be a death sentence.”

The COVID-19 pandemic has unveiled the effects of pervasive inequality across the country, especially for those who live in confinement, engulfed with fear. For the ones who are unprotected, vulnerable, and without a home—the world now temporarily seems uninhabitable. Everybody deserves a chance to survive the pandemic—documented, detained or not.

The Flavor of Sound: Banana Pudding