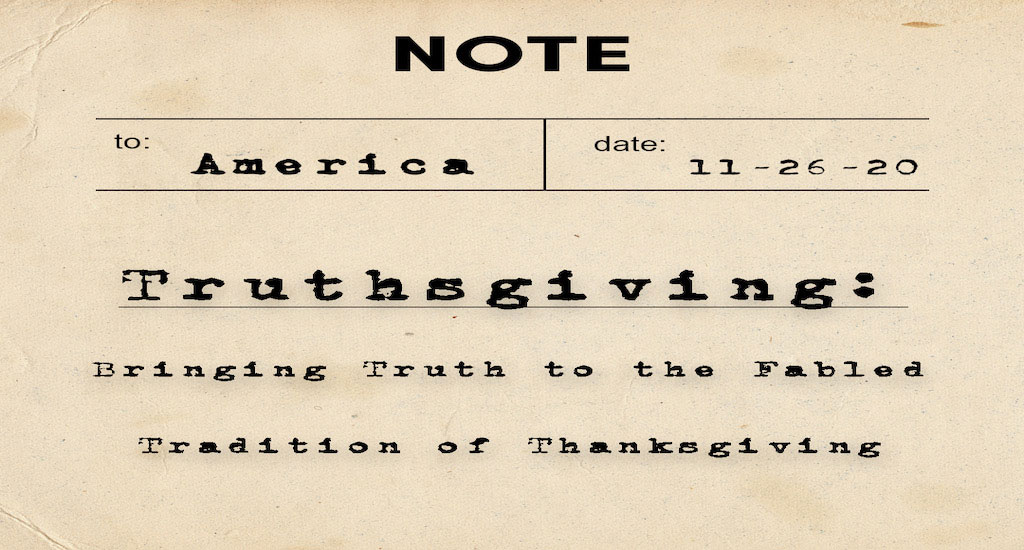 Truthsgiving: Bringing Truth to the Fabled Tradition of Thanksgiving

Americans have been taught to see Thanksgiving as the one time a year where we give thanks and spend time with our families. Not only have we emptied this day of all its truth, but we have also emptied the word “thanksgiving” of all its thankfulness. We have given ourselves over to the myth of Thanksgiving—the myth that says that friendly Native Americans welcomed the Pilgrims to America, taught them how to survive on the land, and then willingly handed their land and country over to white men.

The erasure and exclusion of Indigenous narratives from our history have allowed us to nonchalantly practice this holiday, devoid of all truth and meaning.

Truthsgiving—a term created by Indigenous activist Christine Nobiss—shares the truth of Thanksgiving and dismantles the myth that has been perpetuated for hundreds of years. It is time for us to follow Nobiss’ lead and confront our history as a nation so we can move towards building a better future.

The True History of Thanksgiving

It is important that we acknowledge that Indigenous people have at least 12,000 years of history before the Europeans arrived on this land—their story does not begin with colonization. You could say they have been here since the beginning of time. According to Smithsonian Magazine, the Mayflower was not the first time the Wampanoag people had been in contact with Europeans—there was already a century-long, bloodied history. And there were a couple, if not a handful, of Wampanoags that spoke English due to their own European travels. They even knew the actual coordinators of the Pilgrims’ colonial project.

Records show that the “first thanksgiving” took place in 1621 in present-day Massachusetts between the Pilgrims of Plymouth Colony and the Wampanoag* tribe. However, there is no real evidence of a formal invitation being extended to the Wampanoag people. Experts believe the reason there were 90 members of the Wampanoag tribe present was due to the orders of Wampanoag leader, Ousamequin, who sent his men as a response to the sound of gunshots.

From the start, there were deep tensions between the Wampanoag people and the Pilgrims, especially considering the fact that the Pilgrims stole from the tribe’s winter provisions during one of their first encounters. The Pilgrims furthered their harm on the Wampanoags by inflicting them with deadly epidemic diseases. This led their leader, Ousamequin, to form an alliance with the Pilgrims out of survival and not out of friendliness. The Thanksgiving myth does not address the catastrophic impact of King Philip’s War, which resulted from the disintegration of this alliance. It also does not acknowledge the resilience and resistance of the Wampanoag people who have survived centuries of violence and oppression and are still here despite it all.

That first harvest was followed by lethal strife between colonizers and Native people, including but not limited to the Wampanoag people. The European settlers thanked their Native allies by seizing their land and imprisoning, enslaving, raping, and murdering their people. “Thanksgiving” celebrations that followed in the years to come were often responses to brutal “victories” against the Native people of the land (i.e., the Pequot Massacre of 1637 and the beheading of Wampanoag leader, Metacom also known as King Philip, in 1676.)

The Establishment of Modern Thanksgiving

“Thanksgiving” as we know it quickened its establishment in 1769 when a group of Pilgrim descendants decided to begin claiming and implanting the idea that the Pilgrims were the “fathers” of America. These Plymouth Pilgrims felt threatened that their cultural authority was slipping away as they witnessed New England become less relevant, hence why they decided to take control of the narrative.

From there, it was a published piece by Rev. Alexander Young with a footnote claiming “This was the first Thanksgiving, the great festival of New England” that made this event widely accepted. And finally, it was none other than Abraham Lincoln that declared Thanksgiving a national holiday. Thanksgiving was used to foster “unity” during the Civil War by feeding the myth that Native Americans invited the Pilgrims to take over their land. David Silverman, author of “This Land Is Their Land: The Wampanoag Indians, Plymouth Colony, and the Troubled History of Thanksgiving,” shared via Smithsonian Magazine that, “ …[the] Thanksgiving myth allowed New Englanders to create this idea that bloodless colonialism in their region was the origin of the country, having nothing to do with the Indian Wars and slavery. Americans could feel good about their colonial past without having to confront the really dark characteristics of it.”

Where Do We Go From Here?

Ultimately, we need to give land and ownership back to the Native people of this land. But here are some steps you can take to show your solidarity as a non-native.

The Flavor of Sound: Espagueti Verde with Idalia Valles

Moving Forward: Books That Hold Us Accountable with Lupita Aquino