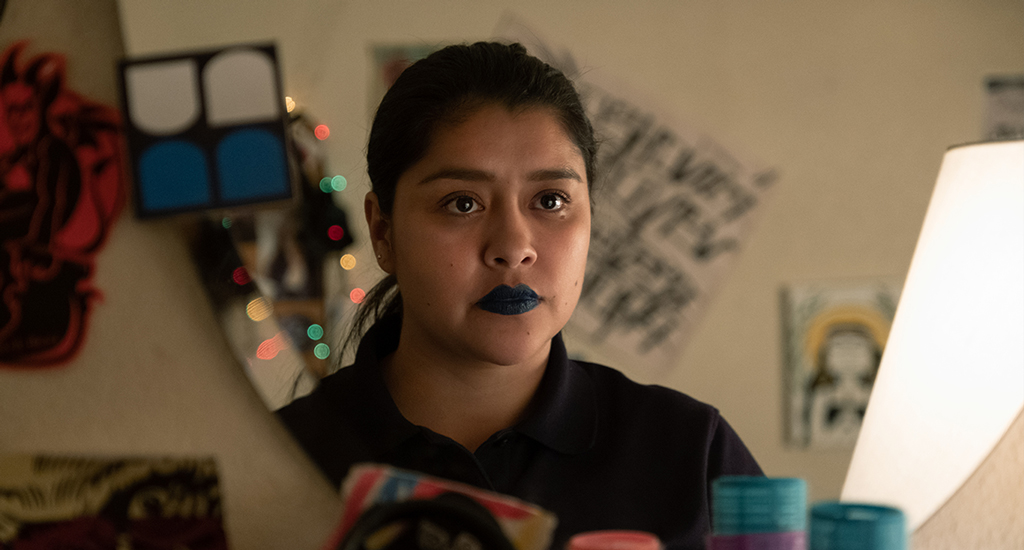 This season marks the final chapter for the Starz show “Vida”, a drama series centered around the lives of two estranged Mexican-American sisters who return to their Los Angeles-based childhood neighborhood of Boyle Heights.

Chelsea Rendon plays activist Mari Sanchez who is trying to save her neighborhood from gentrification and is the younger sister of Johnny Sanchez, the formal flame of one of the main characters.

Rendon spoke with BESE about her character’s growth throughout the series, the significance of some of her most emotional scenes from this final season, and what’s next for her upcoming projects.

As Mari enters the third and final season of “Vida,” she is coming to terms with the fact that the world around her is not actually as black and white as she thought it was.

“When you start the show and see Mari, [she’s a] very in-your-face woke activist and strongly believes in what she believes in. She feels in-the-right and gentrification is the worst thing ever. She sees a different view in season 2 when she moves in with the sisters. Season 1 Mari is narrow-minded and sees the world as black and white, season 2 she sees there is a gray area—she is stuck not being part of the protest and not stepping in—[being] stuck as a bystander is very important. This season is her season of growth, deciding who she wants to be and doing what she believes in,” Rendon said.

Part of “Vida’s” audience appeal throughout its three seasons is its realistic portrayal of Latinx family dynamics, including the antiquated machismo system many Latinx women must bite their tongues under. Rendon’s character is no exception.

“Latinos and Latinas all know this, as a woman she is there to cook and clean. Men eat first, then they can eat. That’s how Johnny grew up, not the same ideals as their dad, but that’s just how he grew up. She was never valued as anything because that is what she was supposed to do—it was expected. It’s not just Latinos, it’s in Muslim and Asian families. Men are privileged and we talk more about that later in the season,” she said after the episode airing of Mari having to deal with her father’s death. As Mari grieves in her signature blue lipstick, her aunts can’t help but to comment on how the lipstick color is disrespectful for the occasion, instead of first expressing their condolences. Viewers also later find out her dad left everything to her brother, Johnny, and nothing to her—even though she is the one who had looked after him.

The episode also showed Mari trying to figure out next steps after the unexpected death of their father, a death she blamed her older brother for because he didn’t take their father to his latest doctor’s appointment.

In one of the final scenes of the episode, Mari finds a paper bag near her father’s bed filled with pan dulce—a sign that he also didn’t do all the things to improve his diabetic health condition.

Rendon says she hopes this episode gets viewers thinking about their own health and the health of their families.

Listen, I’m a diabetic and just like Mari’s dad, I can’t give conchas up (not conchas, and not Conchas knowhatImean? 😉) that’s why this storyline with Mr. Sanchez was so real to us, cuz in the Latinx community we don’t take care of our sugar, man!

For that emotional scene, Rendon said she drew from a personal moment with her mother’s health scare just a few weeks before shooting.

“My mom had an episode of Bell’s palsy a few weeks before the episode. It was such a big scare because I was on the phone with her. She said she couldn’t close her eyes, she couldn’t move her face, she said ‘I think I am having a stroke.’ I live 35 min from her. I was trying to call 911 and drive over. I definitely connected on that drive like, ‘I am going to lose my mom.’ I connected to that scene. [I have received] lots of feedback [that it’s] so genuine and so raw,” Rendon said about drawing from her personal experience for her character.

This isn’t the only difficult scene for Rendon in this final season. Mari’s storyline also has her witnessing first-hand a father getting ripped away from his children and deported by ICE.

“I really love the ICE storyline because it’s very much what’s happening around today.

As quarantine is happening, kids [are] in cages [and it’s] not possible for them to be 6 feet apart. The way it plays out, Mari witnesses someone getting taken away from ICE and it moves her and starts this fire. It’s important because we all have a voice and we can say something,” Rendon exclaimed.

She added that activists also have to speak up about families being torn apart as much as some protestors are speaking up about re-opening the economy.

“Everyone is protesting because of businesses or the right to go to the beach, [why do] you feel so strongly about that but don’t say anything when families are torn apart? We all should say something—it’s having humanity, empathy, and compassion. If we can get a few people to say that, I feel we did a job well done—to start a conversation,” she said.

After “Vida,” Rendon’s life will revolve around some new projects, including producing and starring in a rom-com.

“I am excited to be the lead in a romantic comedy and play a human and a woman without built-in stereotypes around her,” Rendon said.

As for the message she hopes to leave audiences with through her character as Mari, it’s all about viewers finding their own inner strength and expressing it boldly.

When asked about the lessons she hopes Mari leaves behind for “Vida” audiences, Rendon said, “Finding your own strength and finding what you want at the end of the day. Focusing on yourself. Staying true to yourself and finding your own voice.”

A Different Type of Frontline Responder