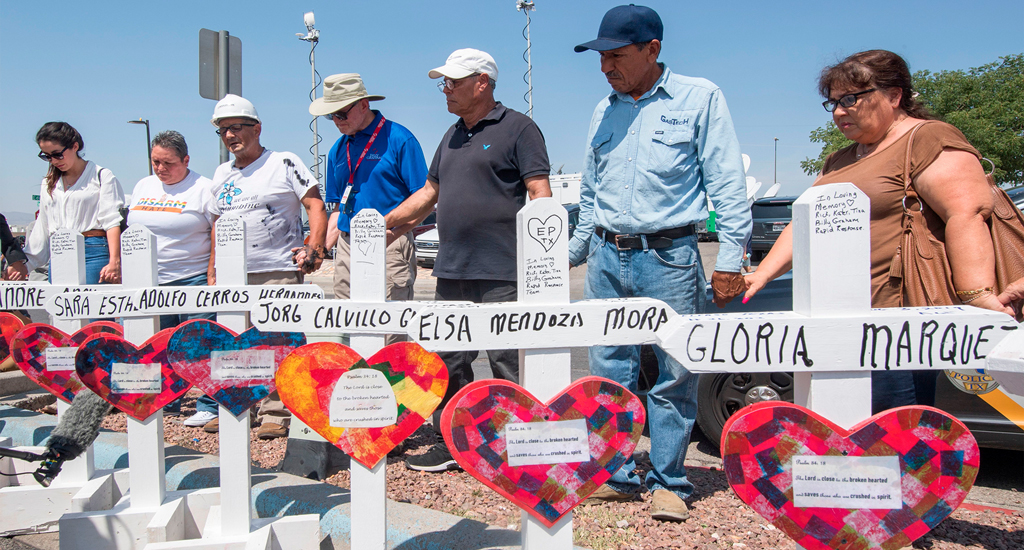 When Racist Rhetoric Meets Gun Violence in the United States

Mass shootings are a trend in America—a destructive pattern that goes beyond racial or class divides. You are a target if you are white, Black, Brown, in elementary school, watching a movie, visiting your place of worship, running a quick errand at Walmart, the list goes on and on.

While shootings and gun violence have become a constant in American society, this past weekend was different. For Latinxs, the tragedy in El Paso wasn’t just a homegrown act of terror; it was one of the deadliest hate crimes ever targeted at the Latinx community in modern U.S. history.

The shooting marks the devastating convergence of Trump’s openly racist rhetoric against the Latinx population, of a history of racism in America, and of our country’s gun violence epidemic—all at the expense of innocent lives. Lives that were lost when a white American man determined to solve the “Hispanic invasion in the United States,” traveled over ten hours to the predominantly Latinx border town of El Paso with a single mission—to kill.

The majority of the shootings that took place in Gilroy, El Paso and Dayton, have been executed by openly white supremacists or those flirting with its ideals. But they are not original. They are the same ideals that Trump has openly shared since before he took a seat in the Oval Office. From his first words as a presidential candidate, to his latest “send her back” comments—Trump has created a space for white supremacists to act out, to come out of the shadows. According to a 2018 report by the Anti-Defamation League, “right-wing extremists killed more people in 2018 than in any year since 1995.”

But Trump didn’t make these people racist; he just made them less afraid to be who they’ve always been. Since the country’s inception, there have existed individuals in the U.S. who have been afraid of those who are “different,” of those who are not white. Today, this othering has become a matter of life or death for Latinxs—as it was for other marginalized groups who were targeted before them.

Take the African-American community. Years ago, the rhetoric espoused by politicians and the media worked to illustrate the myth that Black bodies were dangerous. Films like Birth of a Nation and books titled, The Negro a Beast are just a few examples. The devastating impact of that criminalization is well-documented by both past and current events, including slavery, lynching, segregation, Jim Crow, police brutality and the disproportionate number of incarcerated Black Americans. According to the Tuskegee Institute, over 4,000 Black Americans were lynched between the late 1800s and mid-1900s.

But the America of 2019 is not much different from the one of our past. “Today, it seems, legal exclusion is coming to replace racial exclusion as the major axis of differentiation in society,” writes academic, Mary C. Waters. It also seems that during our time, the criminalization of the Brown body has resurfaced, and we are here to see the gory and heartbreaking consequences.

There is no doubt that we are influenced by what we visually and audibly consume. “The media sets the tone for the morals, values, and images of our culture…Everything they believe about Blacks is determined by what they see on television,” said Stanford University’s research study, Poverty and Prejudice: Media and Race. The study argues that when white Americans only see Black and Latinx Americans as drug dealers, gang bangers, servants, or “narco” drug traffickers, it creates a false narrative about who we are. These stereotypes can create fear in those whose only—or main—interaction with these groups is through their television screen.

Especially under this administration, the president is part of that media. His words, his actions—his tweets—matter, and they too have consequences. In fact, the El Paso shooter’s manifesto included language that was eerily similar to that of Mr. Trump’s.

How we are portrayed, how we are vilified—influences how we will be treated. And sometimes, like in the case of El Paso, that treatment turns to violence.

Even then, violence committed by a person of color versus one who is not, isn’t often treated equally. While the white El Paso shooter was arrested and escorted off of the shopping center premises after killing and injuring dozens of people; the Black Eric Garner was pinned down by multiple officers and choked to death—all because he was allegedly selling untaxed cigarettes.

Mass shootings committed by white non-Hispanic men are deemed mental health issues, a result of violent video games, or labeled as just another bad guy with a gun. But any misstep committed by a person of color is seen as an immediate threat that must be eradicated. We have all these laws and proposals to keep immigrants out of the country, to keep people of color locked up in jail, but where are the laws that keep Americans from killing nearly two dozen innocent shoppers within a matter of minutes?

So while Mr. Trump and his supporters continue to spout their hateful rhetoric and do nothing to keep military-style rifles out of the hands of civilians—BESE will fight back. We will demand gun reform, we will hold accountable politicians who value their relationships with the gun lobby over the lives of innocent Americans, and we will condemn racism and those who continue to spew it.

Our goal is to change the narrative and we plan to do just that. Because at the end of the day, violence and hate affect us all.

El Paso, Dayton, Gilroy, and the many more that came before—we love you and we stand with you. Your stories will never be forgotten.

A Nightmare Come True: What It’s Like Living in Fear of ICE