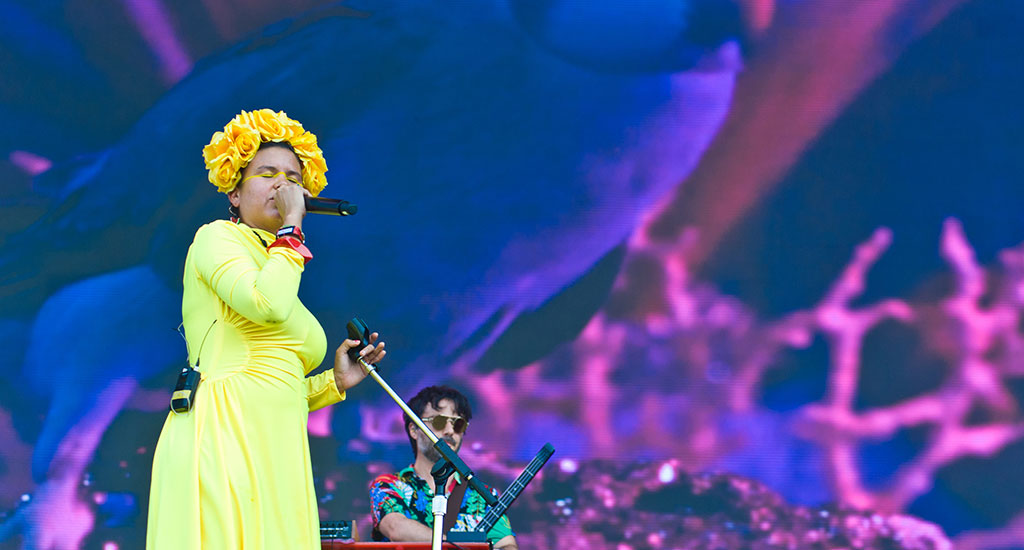 When We Are Dancing, We’re All The Same

We spoke to Bomba Estereo’s Simon Mejia ahead of the band’s performance at the 2019 Tropicalia music festival in Los Angeles county. Bomba Estereo, a Colombian band founded in 2005, has enjoyed over a decade of international and viral success with their fusion of electronic and traditional sounds. We spoke with one half of the duo, Simon, about the band’s origins, their future, and why dance music is what the world needs right now.

I would describe Bomba’s music as a mixture between electronic music and Caribbean music, and also influenced by folk music from Colombia, which is where cumbia comes from. Cumbia is a rhythm that was born here in Colombia, and it spread all over Latin America during the sixties and seventies. But it’s an original folk sound from Colombia. It’s a mixture between Indigenous and African, our first live music.

When you pull from all these different influences, is that something you do consciously or naturally?

When we started the band 13 years ago, more or less, it was more like an investigation—understanding the rhythms from here in Colombia, understanding our dance music, our local tropical dance music, and how that music related to the international dance music. It was kind of an experiment, too, to find where these two different kinds of music meet together. So when we discovered that, then it just flew organically. Now when we do it, it’s just an organic process. And expressing those sounds through a new kind of music, that is this Bomba style that we created. 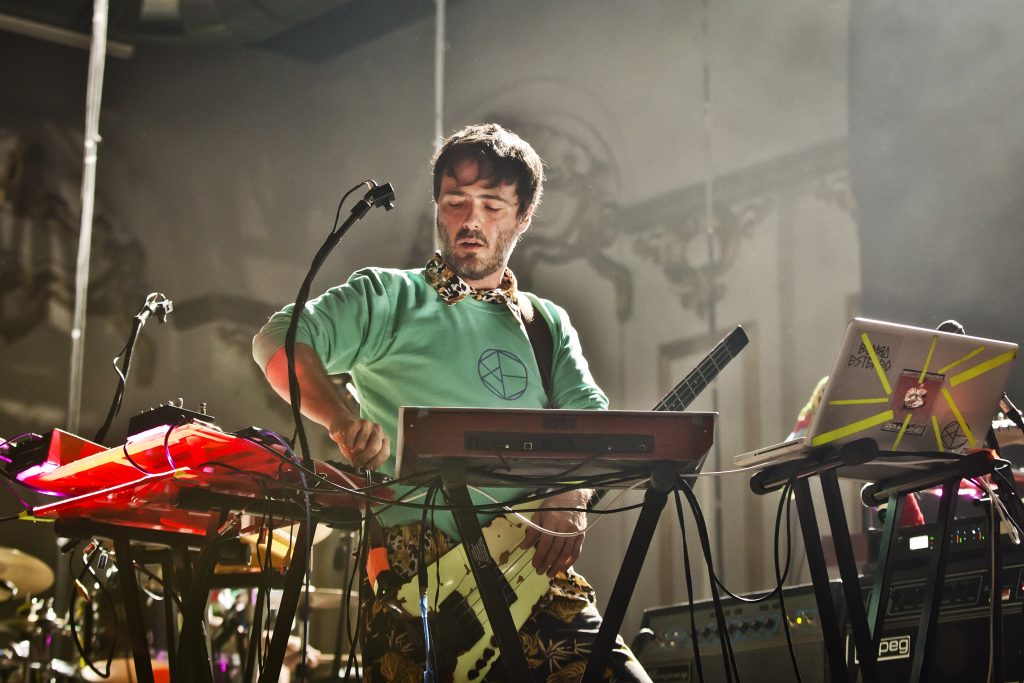 BERLIN, GERMANY – JULY 06: Simon Mejia of the Colombian band Bomba Estereo performs live on stage during a concert at the Huxleys on July 6, 2018 in Berlin, Germany. (Photo by Frank Hoensch/Redferns)

I know you all do a lot of activism around green issues. Could you talk about why that’s important to you and what that has to do with the Indigenous culture in Colombia?

Coming from a place like Colombia—we have these amazing places. We have the Amazon jungle and we have the Sierra Nevada de Santa Marta, that is where Liliana comes from, which are places where Indigenous cultures have lived over centuries, preserving and having a harmonious life with nature, no? So we have these really strong Indigenous presence here in Colombia, but at the same time, we’re living during this massive destruction and we’re sensitive about the subject because we see it every day here in Colombia.

It’s kind of like music, no? It’s like, you want to preserve what is good, what you think is good for the country and for the world. Music has taken us through this journey and through music is how we learned about these Indigenous communities, because we started investigating their music and the influence they had with their music over us, and that led us to understand their way of life and how they perceive the world and nature. So we’ve become a kind of amplifying voice. What I think the modern world has to understand is there’s a way to live with nature without destroying it.

It’s very interesting that countries like Colombia and Venezuela— which in the past few decades have been going through so much in terms of social unrest and violence—yet are countries that are very green and beautiful, and the music is very cheerful and fun to dance to. Is this something that you reckon with when you’re making music? Or is music more of an escape from all of that?

Yes, I think that more than a topic in the lyrics, for example, I think we were just—that’s our culture. That’s how we are and that’s how we express music. Here in Latin America, they balance the yin and the yang. It’s life and death. So you have these beautiful green spaces, but at the same time you have countries in war with lots of drug trafficking, social, political problems. So we’ve been eternally living this contrast, no? This contradiction. So I think the music is implicitly just like that, no? It’s a music that is very joyful, but at the same time can be very sad, no? It’s like we like to dance in the middle of the tragedy and that’s how these cultures are here in Latin America, especially here in Colombia.

Duality is sort of a theme in your music. For example, in the lyrics in “Internacionales,” you talk about being mixed—being Colombian, being American, being all of these different things coming together. Tell me a little bit more about that song and the goal and inspiration behind it.

We’re living in the era of separation, building walls, hardening the frontiers and everything. So it was kind of our response towards that and saying that finally, we’re all the same. The song tells this story that finally when we’re dancing, on the dance floor where we joined together, it doesn’t matter if you’re Black, white, American, Latin American, African, gay, straight, it doesn’t matter where you come from or what your orientation or your religious belief or your social status is—whatever. When we are dancing, we’re all the same.

Would you say that’s the message Bomba Estereo tries to drive home in all of your music?

Yes. Maybe. I don’t know if we have one particular message. But yes, I think that the dancing [is] a way to liberate. Beyond the context of the parties or the festivals or whatever, is that dancing is a way…is a ritual, no? It’s a ritual that comes from centuries ago. It’s a ritual to connect with each other and to connect with superior things, with the universe and with superior energies. And it was used that way in ancient times, no? So I think it’s a very, very powerful expression of the human being and of music.

It’s a very good moment for Latin music and I think it relates to this thing about dancing—this dark time we are living in. The world needs ways of liberation. Latin music is a really strong way towards that, no? It also has to do with social media. We’re living in a social media era. But what I like most about it is that English is not the ruling language of the world regarding music. Now, we can have music that is sang in Spanish and it’s international. Everything is mixing now. And what’s happening with this music is an example of that.

What do you think that means for the future of music?

I think in the future, mainstream music should not be only in one language. So future music should show the huge multiculturalism that we have in the world, no? In the future we should be able to enjoy and listen to music sang in—I don’t know—Japanese, in Arabic, in African languages, et cetera.

Who do you feel your music appeals to the most? Does it appeal to Spanish speakers or do you see many people from different cultures enjoying it?

I think people in general [who] like to enjoy music and dance will enjoy the Bomba Estereo music.

How has Bomba Estereo evolved since it first started? And how do you see the band continuing to evolve?

I think it has evolved within the same style. Every album is a new version of the same style, doing it differently and finding ways of expressing that music—that is the root of Bomba Estereo, this mixture between folk and electronics. And in each album trying to express it in a different way. We treat the lyrics different than we treated them before, with more responsibility towards what we are singing and what the subjects that we’re singing about are. And I see the future as a continuous evolution of this. It’s a continuous search of finding new sounds and expressing new ideas because when you stay in a same creative place, I think it’s like death, an artistic death. So hopefully we’ll continue evolving.

Thank you so much for your time, Simon.