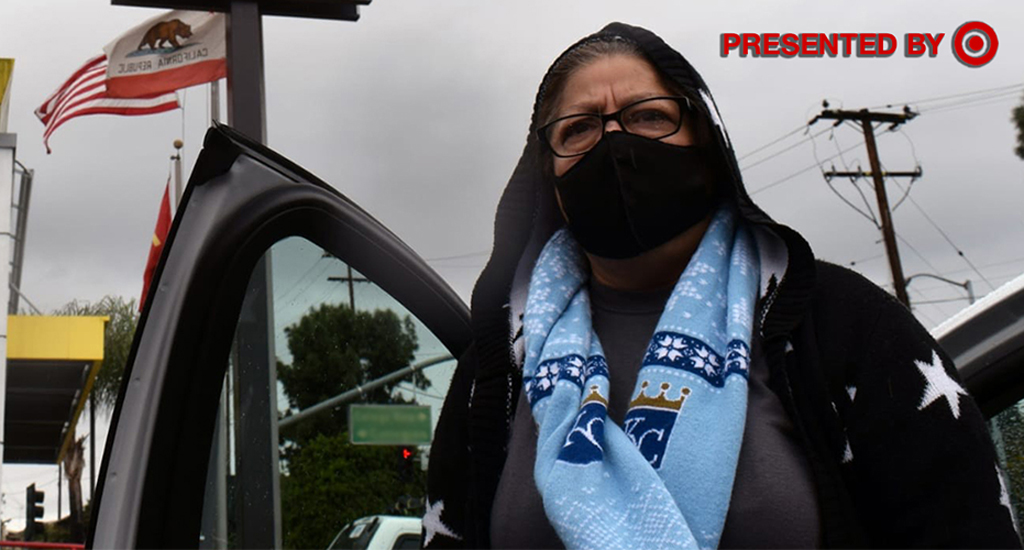 That’s what 58-year-old Laura Pozos reminds herself every day at 5 am as she leaves for her job at a Monterey Park fast food restaurant. She recently took a leave from work to care for her daughter who lives with an intellectual disability—but now she’s back to the daily grind.

When Pozos comes home from work, she needs to feed the 10 additional family members who squeeze into her three-bedroom home, including her four children and two grandchildren.

Though crowded, Pozos’ home arrangement isn’t uncommon among Latinos. A 2018 Pew Research study found that 27% of Latinos live in multigenerational homes, a figure significantly higher than the 16% among white families.

Laura worries that she might catch the virus at work and bring it home with her. “There’s no way to properly social distance,” she says.

Just in July, an Oakland fast-food restaurant was forced to close its doors after an outbreak was linked to the restaurant—25 people tested positive.

A Mexico City native, Pozos is well aware that if she gets sick, her family will too. But she’s taking this pandemic seriously, yet optimistically.

“When this all started, there was a moment that I felt terrorized,” she says. “I didn’t want to go out. I was cleaning extensively, washing everything. But I’m starting to realize that this is long term and I need to remain calm.”

Pozos is motivated to keep luchando, to keep fighting.

“We all have a reason to be here,” she says. “And for me, it’s to contribute to my family, to give the young ones a better future. I’m not saying that my fast food restaurant job is a bad one, but I’d like to leave a [decent] legacy for them.”

Pozos also has a daily ritual for when she comes home: she takes off her work clothes, meticulously making sure that her children and grandchildren don’t come close and she heads to the shower. She thanks God for another day, for being healthy, for not catching the virus.

“Tienes que vivir día a día,” she says. “You have to live day by day.”

With her own packed work schedule, Pozos takes pride in teaching her children how to look out for themselves. Everyone at the house puts in their granito de arena (grain of salt) to help around the house and stay tidy. On Saturdays, her three daughters wash their own clothes and help around the house. She’s proud of her girls and how they’re independent.

And her youngest daughter, 14, is already paving a path for herself: Pozos says that on trips to the park, her daughter loves picking plants, researching their medicinal benefits — Pozos’ smile radiates through the phone as she talks about her daughter.

“It brings me happiness that she’s doing what she loves,” she says, adding that her daughter still doesn’t know what she wants to be when she grows up. “She’s about to start the 9th grade and she’ll start taking biology classes soon.”

“She really likes that,” adds Pozos “It motivates me because although we’re going through this, seeing her encourages me to keep luchando.”

As for her son, it brings her joy to see him develop a close bond with his own children in the same way she has with her own.

“He’s such a family man and loves taking care of his children,” she says. “He loves being with them.”

Lucha means to fight, to struggle for something better. That’s what keeps Pozos going — it brings her solace to know that although money may be tight (her husband and son lost hours due to the pandemic), she’ll still be able to create a future where her children can live out their dreams.

“I want to teach them to fight for what they want and do what they need to do to get there,” she says .The near future isn’t so bright, but living day by day gives her hope that soon we’ll get out of this.

“We can’t lose faith,” she says. “If we all unite and protect each other, we’ll get out of this [stronger] than before.”

A Tale of Two Worlds: Hope, Resilience and Proud Cultural Roots Abound for Latinx Teens and Young Adults in the U.S.